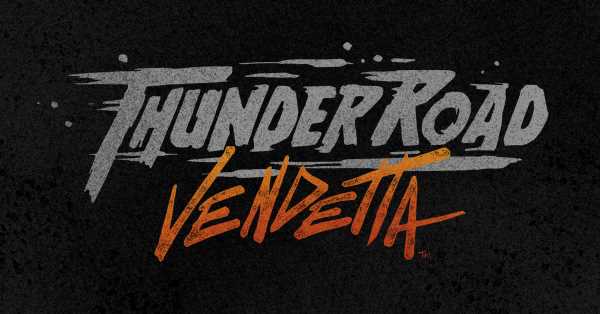 Thunder Road, the miniatures board game inspired by Mad Max, is being rebooted. Titled Thunder Road: Vendetta, the game was announced Wednesday by Restoration Games. The project will begin as a crowdfunding campaign in October.

Released in 1986, the original Thunder Road was a stand-alone boxed board game from Milton Bradley. The base game included three cars and a helicopter, a nod to the gyrocopter from Mad Max 2: The Road Warrior. It tasked players with driving down an endless road, with sections of track that connected as the action rolled across the table. Vendetta will include lots of different terrain, vehicles, and landmarks. Expansions are said to include new drivers, motorcycles, and rules for fire.

Restoration’s Rob Daviau (Risk Legacy) said his team is shying away from the post-apocalyptic setting in favor of a more grindhouse art style.

“We have gone with a slightly different vibe,” Daviau said in a private press briefing. Gameplay will be different as well, he added. “It’s a little more advanced, but you’ll still be rolling dice and shooting each other.”

Crossbows and Catapults reboot coming from HeroQuest board game designer

Once the crowdfunding campaign is complete, the goal is to release the final product as soon as possible. Daviau said that sculpts of the final miniatures are already underway. Restoration added that this is a much more traditional project for their team, and won’t require the same investment in manufacturing as Return to Dark Tower, an electronic game with a companion app that raised more than $4 million on Kickstarter in 2018. That project is still in production, having missed its original February 2021 promised-by date.