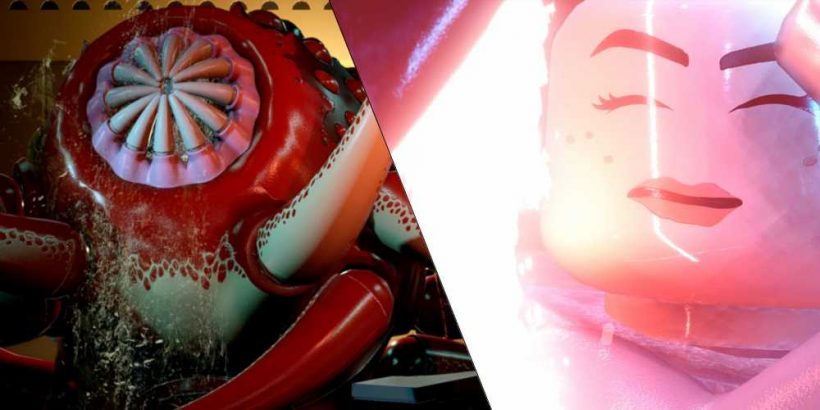 The Force Awakens is the thrilling opening to the third Star Wars trilogy. Fittingly, it is also one of the launching points in LEGO Star Wars: The Skywalker Saga. You will escape horrifying aliens on the Millenium Falcon, dogfight TIE Fighters, and battle the fearsome Kylo Ren in this episode. Along the way, you will also complete a number of challenges.

Everything from locking Snowtroopers out in the cold, to starting a dance party, to hitting Kylo Ren with a snowman, will be dealt with here. This guide is your one-stop-shop for all the Episode 7 challenges.

In First Order of Business, you can reach the conclusion of the level in four different ways. Through the hanger, by following the commander and acquiring his key, distracting the commander with the disco ball, or by sneaking through the underground tunnels. In order to complete your first challenge, “Sneaking Mission”, you are going to want to take the underground tunnels. Take a right from where you begin the mission. You will see a Stormtrooper working while standing on scaffolding. Use Finn’s grenades to blow the trooper up, then use Poe's grappling hook to open the door.

Follow the hallway until you reach a control room. There are three keys that need to be slotted into three keyholes. All the keys are in the room and everything is color-coded, so this isn’t hard to work through. This will open a backway that leads down into the subregion. From here you will push some boxes in the way of steam leaking from pipes. Once you get to the end here, climb a ladder and you will be in the hanger. Challenge completed!

The second challenge, “Party Time!”, involves following a completely different route. Here, you want to go straight down the hall from where you start at the beginning of the level. You will see a commander go into the break room. However, instead of following him, go to the corner on the right side of the room. Destroy the junk and build a command console from it. Use Poe to interact with the command console and trigger a disco ball to drop from the ceiling. This will complete that challenge.

Lastly, when you are in the hanger, look for a line of storage bays that have targets next to them. Shoot the targets to take out different troops. This will complete the “Hazardous Work Environment” challenge.

To start the mission, just fly around the outskirts of the area, flying through the cylindrical debris. This is both a good way of getting studs and it will inevitably lead to you completing the “How Low Can You Go” challenge. Then, start fighting the TIE Fighters.

Before you engage with them, try to get a little distance; when they are all bunched up, open fire. This will easily help you complete the “Getting Pretty Good at This” challenge. While fighting TIE Fighters you will eventually have one of them lock on to you and fire a missile. Just dodge it with either bumper to complete the absolute gimmie of a challenge titled “Not So Easy Without a Co-Pilot”.

Reap What You Solo

Once you have dealt with the first Rathtar, there will be an astromech command console in the next room for Solo’s team. Use BB-8 to interact with it, opening up an alternative path. Follow the path and you will end up on a balcony looking down on the baddies in the turret room. This will give you the “The High Ground” challenge achievement.

In order to complete the “Rathtar Ruse”, you simply need to use Rey’s Breaker Blaster tool to shoot the ceiling above the Rathtar. This will cause debris to drop down and crush on it.

If you do bypass the Rathtar, and jump down the hole, you can still make the shot.

For the last challenge, you simply need to use Finn’s grappling hook to pull the crate open in the room below the turret (it is the room that has the crate which requires a password). Then, mount the control system that appears once you do so. This will allow you to control the turret above and earn you the “Turret Takeover” challenge. As an aside, you can use the turret to destroy the otherwise indestructible boxes in the room above. There are a lot of studs to be had by doing this.

It takes 90,000 studs to get the True Jedi achievement. With the amount of stuff to destroy for studs in this stage, this shouldn’t be too tough. Especially if you blow up the crates in the turret room.

While progressing along the path to the left of where you begin, you will be fired on from above by some Stormtroopers on a bridge. Simply switch to a scoundrel character and use their scoundrel shot to blow up the bridge. This will complete the “Rug Pull” challenge.

Now, while you travel along that main path, you will hit a dead-end that features a giant door. Snowtroopers will continuously flow in through this door. Use a hero character to grapple the grapple-point above the door to permanently close it, locking the rest of the Snowtroopers outside and completing the “Snowed in” challenge. But don’t go anywhere, the next challenge is close by.

Now, while facing that door that you just locked, look to your left. You will see a giant window. Move toward it and you will see Rey escaping, completing the “Rey’s Escape” challenge.

The True Jedi achievement requires collecting 90,000 studs here. This one is easy to miss if you aren’t diligently breaking everything lining the walls. That being said, you will need to revisit this stage in the free-play mode in order to get nearly all the Minikits, and there are more opportunities for studs when you have characters that allow you to access the different areas, so don’t sweat it if you don’t crack 90,000 in your story mode run.

The first challenge is completed in Poe’s section. Simply evade three missiles with the roll dodge. This will get you the “Heck of a Pilot!” challenge completion.

Once you are finished with Poe’s section of the level, you will join Finn and Rey. The first of their challenges have you shooting the helmets off of the Snowtroopers. So, if you are in the story mode you are going to want to switch to Rey. Just aim for the helmets; once you pop five of them off you will complete the “Keeping a Cool Head” achievement.

Now, for the final challenge, which is only completable in the free-play section. During your second battle with Kylo, you will be able to build a BB-8 snowman. Use a Jedi to throw the snowman at Kylo and complete the “Snow Joke” challenge. Keep in mind that this is the only chance you will have of completing this challenge. You can’t build the snowman in the first or third arenas

The camera can be a HUGE pain here as it wants to lock on to Kylo, so hold the left trigger while using a melee character (allowing you to freely control the camera) to make this achievement less of a headache.

The True Jedi achievement requires collecting 80,000 studs. As long as you don’t ignore the stud rings in Poe’s section, you should be able to clear this requirement easily.