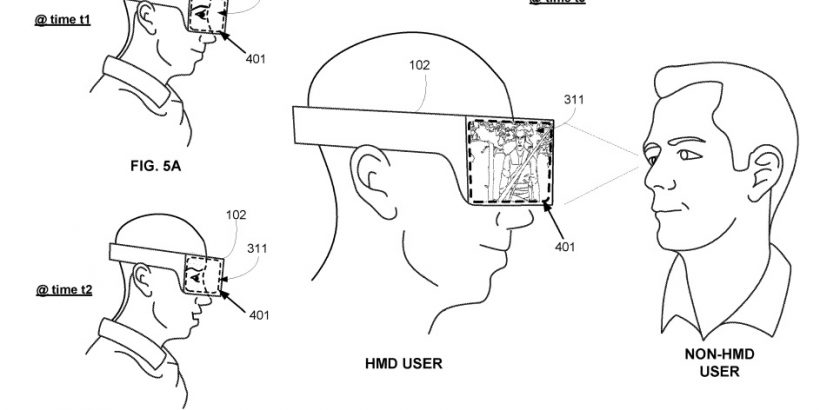 Companies working to make virtual reality (VR) more social aren’t purely focused on expansive metaverse’s, they’re also looking towards hardware solutions. The latest patent to come from Sony Interactive Entertainment (SIE) on this matter sees the addition of a screen mounted to the front of the head-mounted display (HMD) to show those outside of VR what the player is seeing.

As for the in-game content, this is slightly more unusual. This envisions using eye-tracking to select the area of content the player is viewing to then display on the front display screen. Thus, those outside of VR would get a better understanding of what the user is playing. Although there are already examples of this. PlayStation VR since day one has utilised a TV as a social screen for other players, whilst Oculus Quest allows you to view content on a connected mobile device.

It’s worth pointing out that while the patent was published this month, SIE did originally file it in 2019. It’s unlikely that the upcoming PlayStation VR 2 (or whatever it is called) will likely feature the second screen, but new rumours continue to suggest the headset will have eye-tracking built-in for foveated rendering purposes.

If the idea of putting your face on the outside of the headset sounds familiar it’s because Facebook Reality Labs recently released new research suggesting a very similar thought process. Called the Reverse Passthrough VR Prototype this went very hi-tech with 3D displays to give a sense of depth rather than a flat 2D screen.

The fact that both SIE and Facebook are working on this suggests that VR headsets of the future could have both internal and external screens. For continued updates, keep reading VRFocus.