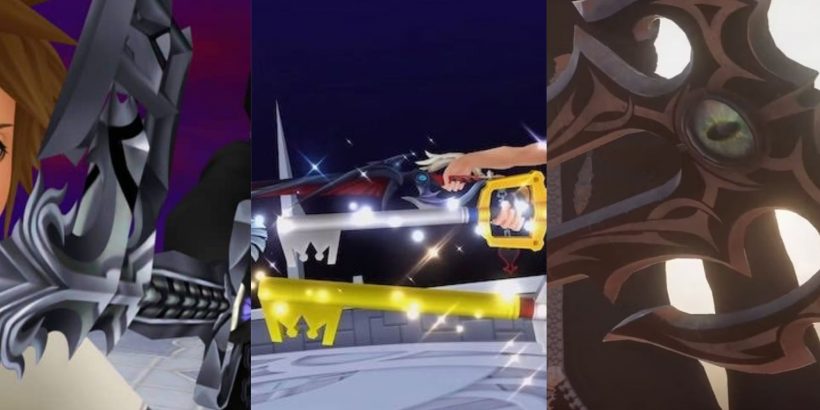 The keyblade from the Kingdom Hearts series is one of the most recognizable, iconic video game weapons of all time. While the Kingdom Key, Sora’s default weapon, is a classic, there are many other keyblades from across the series that stand out for their design, attack capabilities, and personality.

From whimsical Disney-themed to epic originals, there’s no shortage of variety among keyblade designs. There’s one for everyone. Ever wondered which keyblade might be your default weapon to wield? Your Zodiac Sign could be the key, pun absolutely intended. So, board your Gummi Ship and let’s take to the stars to find the answer! 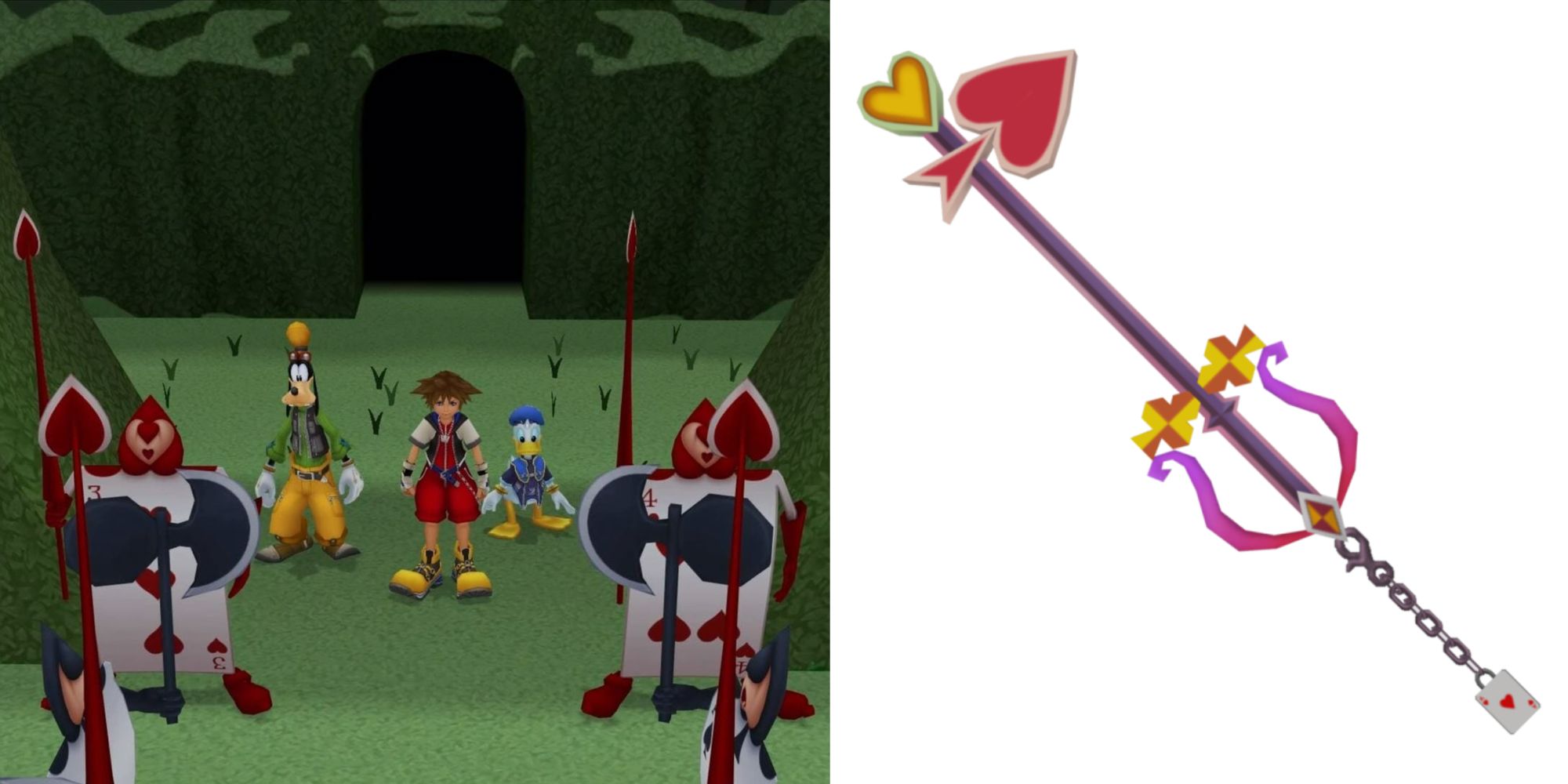 In Kingdom Hearts I and other Kingdom Hearts games, the Lady Luck keyblade is found in Wonderland. It emphasizes magic and summoning power, but also has a strong physical attack. Its whimsical world of origin matches Aquariuses’ own imaginative and carefree nature, making Lady Luck a suitable weapon of choice for them.

Its bright pink coloring sets it apart from other keyblades and gives it a unique visual appeal, perfect for Aquariuses’ desire to be distinct among the crowd. 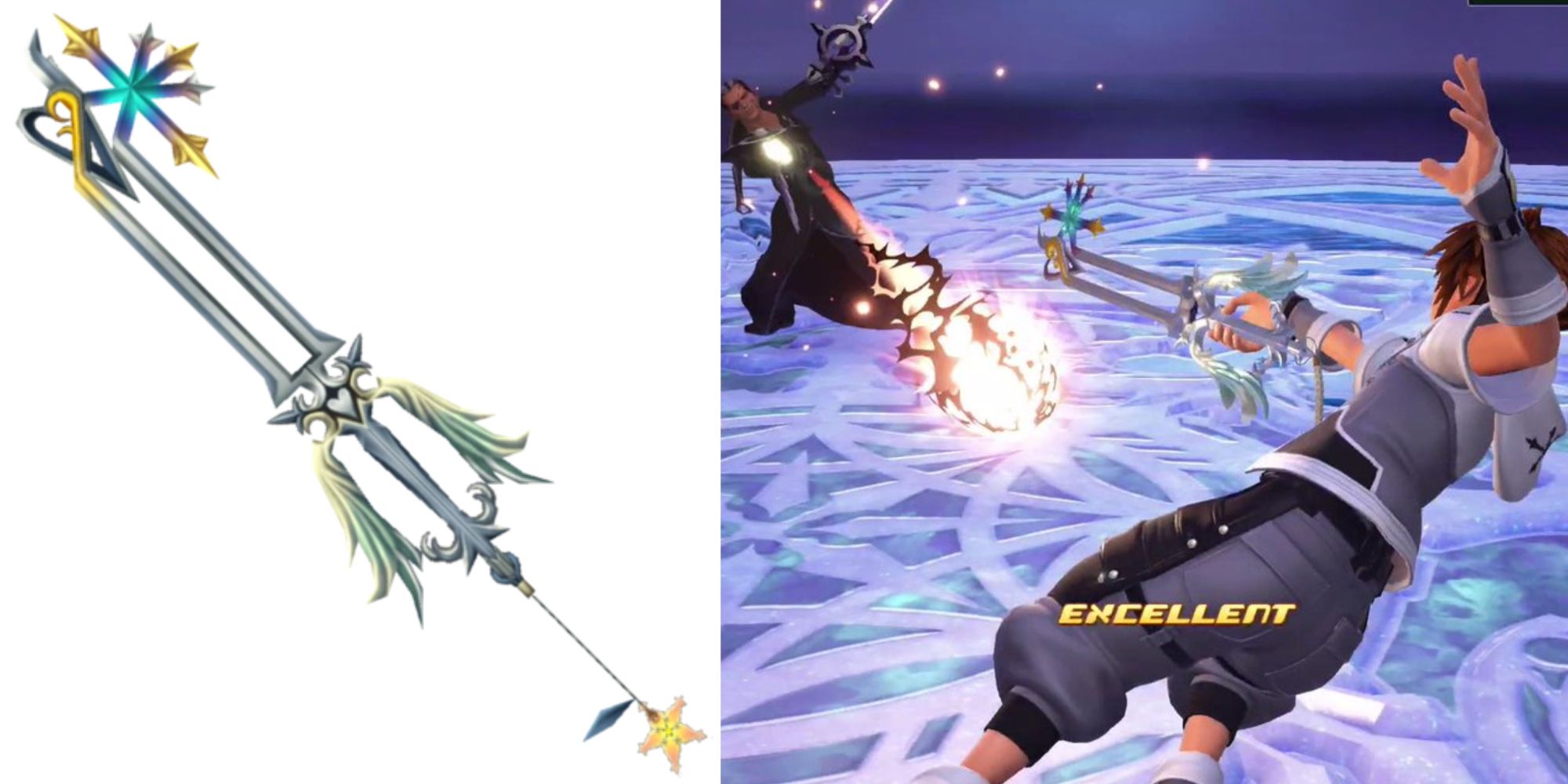 The Oathkeeper keyblade’s name alone is enough to appeal to Pisces, who value loyalty, defending their friends, and keeping their commitments. The keyblade first appears in Kingdom Hearts I, given to Sora by Kairi following her rescue, and its name reflects Sora’s connection to her. Like Sora, Pisces would likely use Oathkeeper to protect their loved ones, vowing to keep them safe.

Oathkeeper’s appearance also reflects a magical quality that may aesthetically appeal to Pisces, who often possess a mystical air about them. 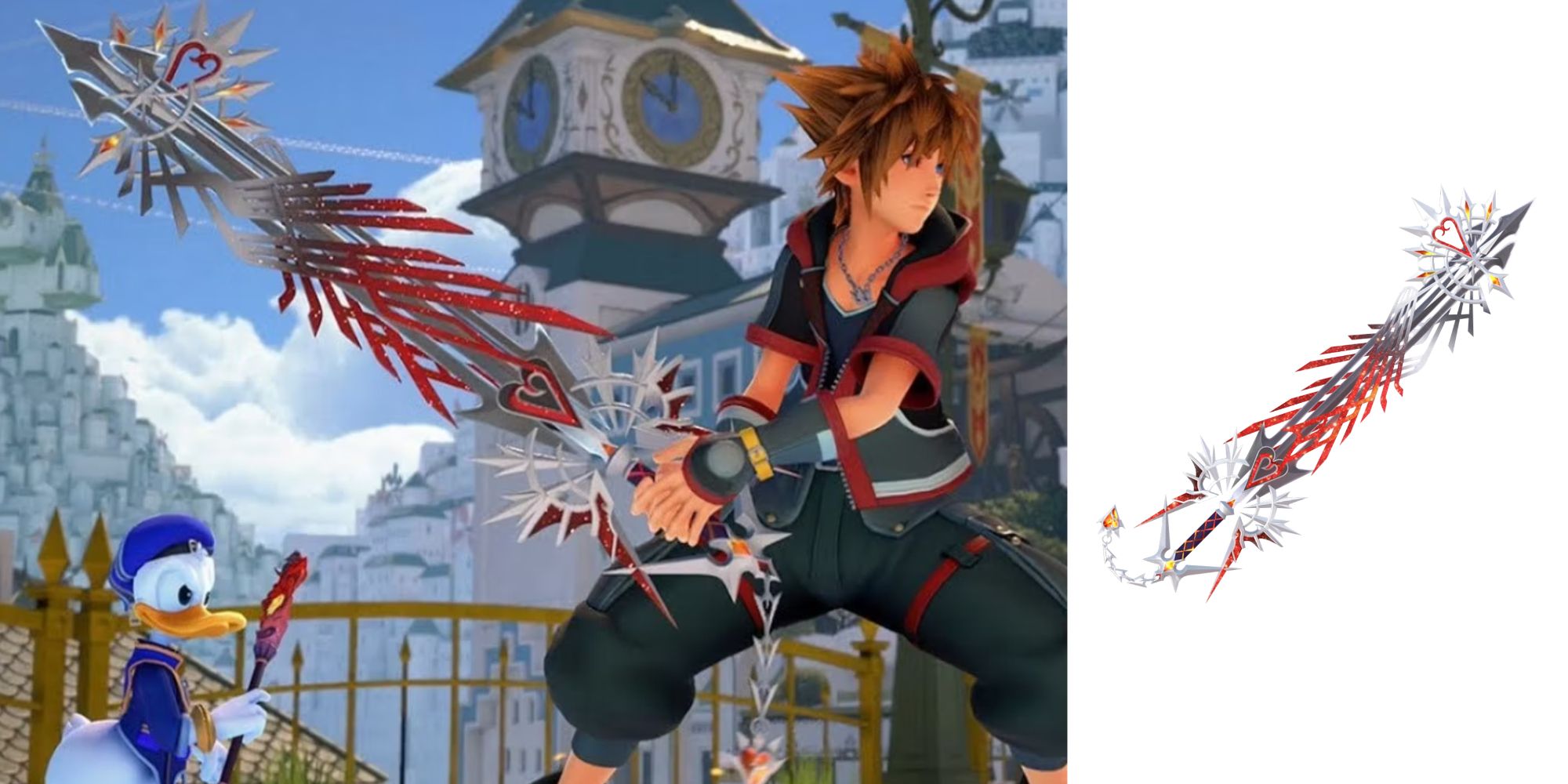 Aries are eager to leap on any challenge they come across, which is why the Ultima Weapon is the keyblade for them. The Ultima Weapon is extremely difficult to unlock in every Kingdom Hearts game, usually requiring the highest tier of item synthesis to create.

Yet gaining the keyblade is well worth the effort, as its attack and strength are unparalleled by any other weapon. Aries’ own natural aggression pair well with the power of the Ultima Weapon, and they could use this mighty keyblade to achieve great victories. 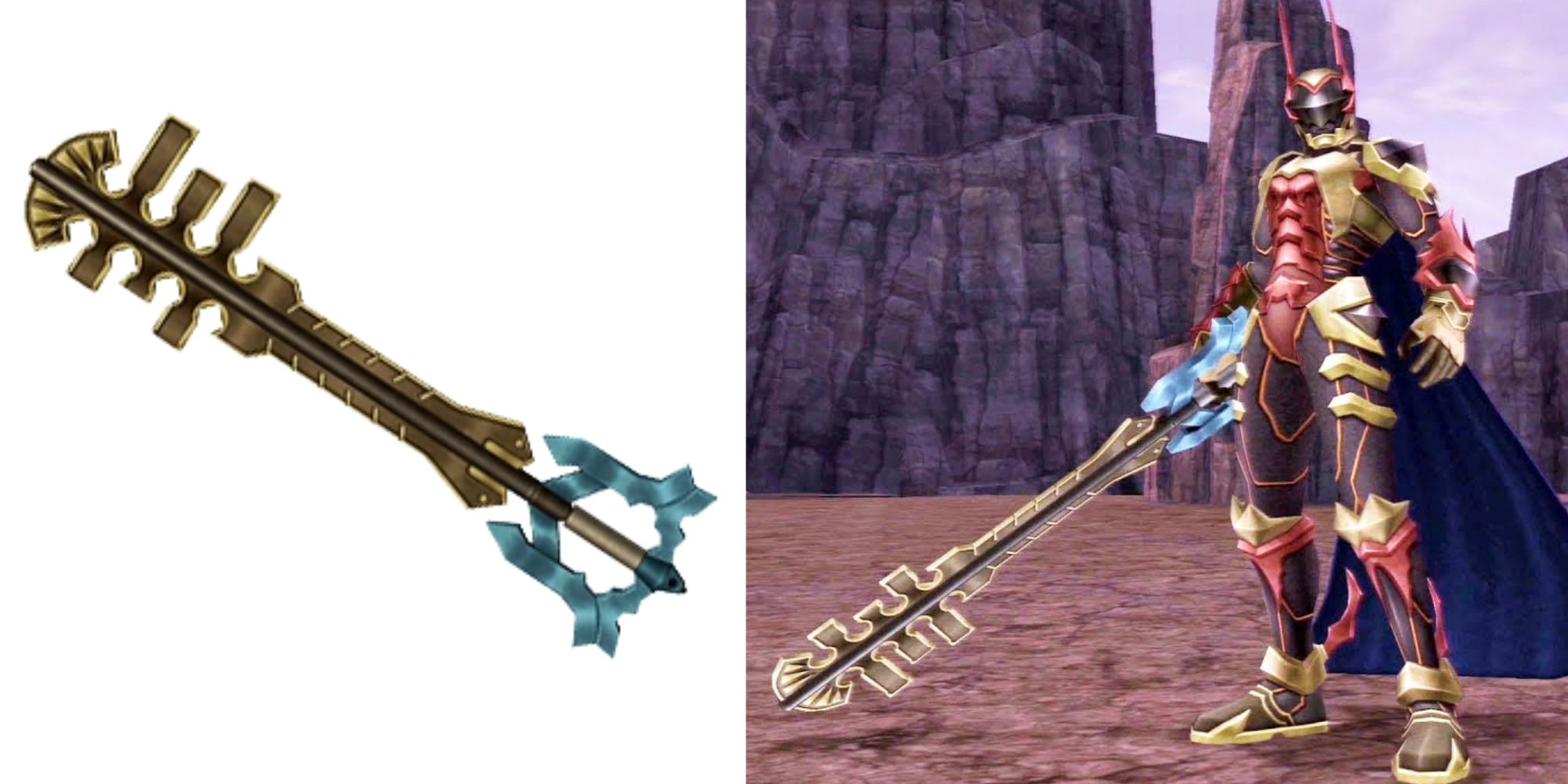 This is what makes Ends of the Earth the perfect keyblade for Tauruses, who also possess the strength necessary to wield this giant weapon. Tauruses’ grounded nature would allow them to stand firm as they wield this powerful keyblade. 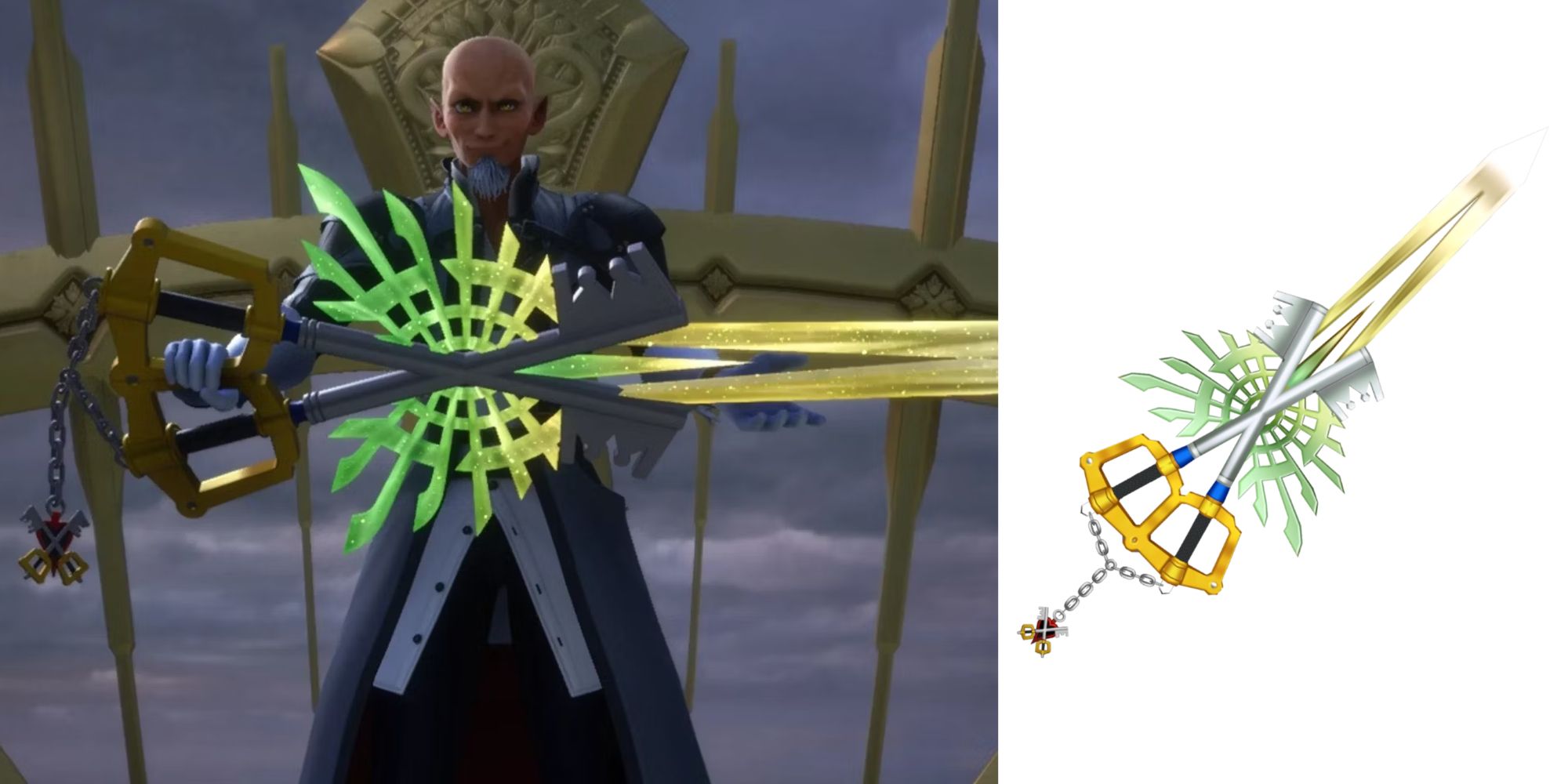 The X-Blade is the infamous object of Master Xehanort’s desire, but Geminis may resonate with this keyblade because of its dual nature. The X-Blade needs to be reforged by a clash of light and darkness, first attempted through the battle between Ventus (pure light) and Vanitas (pure darkness) in Kingdom Hearts: Birth By Sleep.

The need to bring these two opposite sides into harmony may appeal to Geminis, symbolized by twins. Also, the mystery of the X-Blade will intrigue Geminis, who have a natural curiosity. 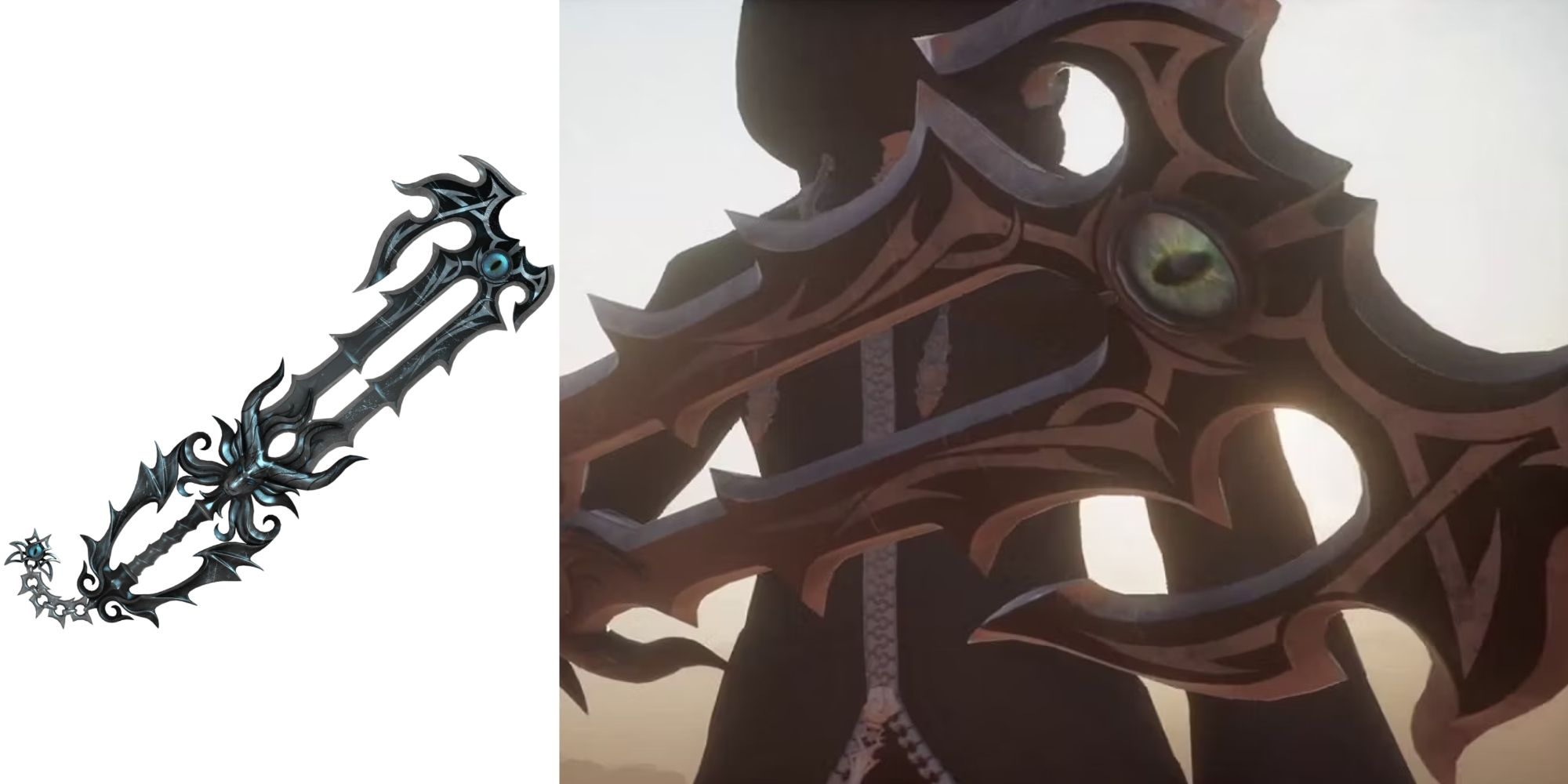 The Gazing Eye keyblade is notably wielded by Master Xehanort, though its significance as a keyblade meant to watch the events of history unfold across time was only recently revealed. Its function as a silent observer may appeal to Cancer’s own silent and brooding temperament.

Cancers can also relate to Xehanort’s relentless passion as he pursues the coming of Kingdom Hearts and the reforging of the X-Blade, using the Gazing Eye to accomplish his mission. Cancers would wield this dark and powerful keyblade with similar drive and determination. 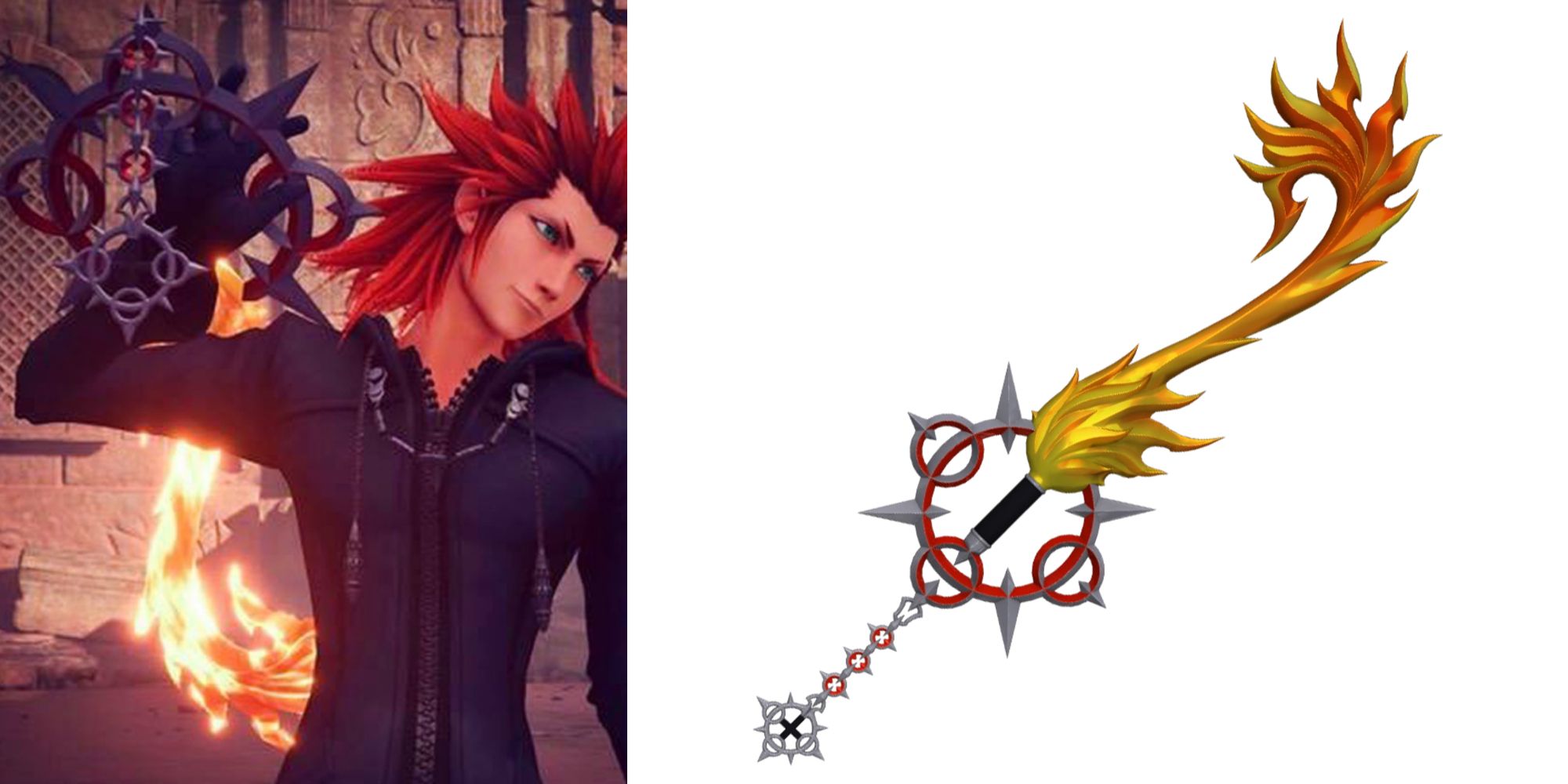 Leos are radiant individuals with a vibrant presence, which is why the Flame Liberator keyblade’s fiery aesthetic perfectly captures Leos’ personality. This keyblade belongs to Lea, first summoned by him in Kingdom Hearts: Dream Drop Distance.

Lea and Leos share a few things in common beyond a similar-sounding name and a fondness for fire-themed keyblades. Both are charismatic, unafraid to speak their mind, and desire to be remembered. This bond with Lea further emphasizes that Flame Liberator is an excellent keyblade match for them. Got it memorized? 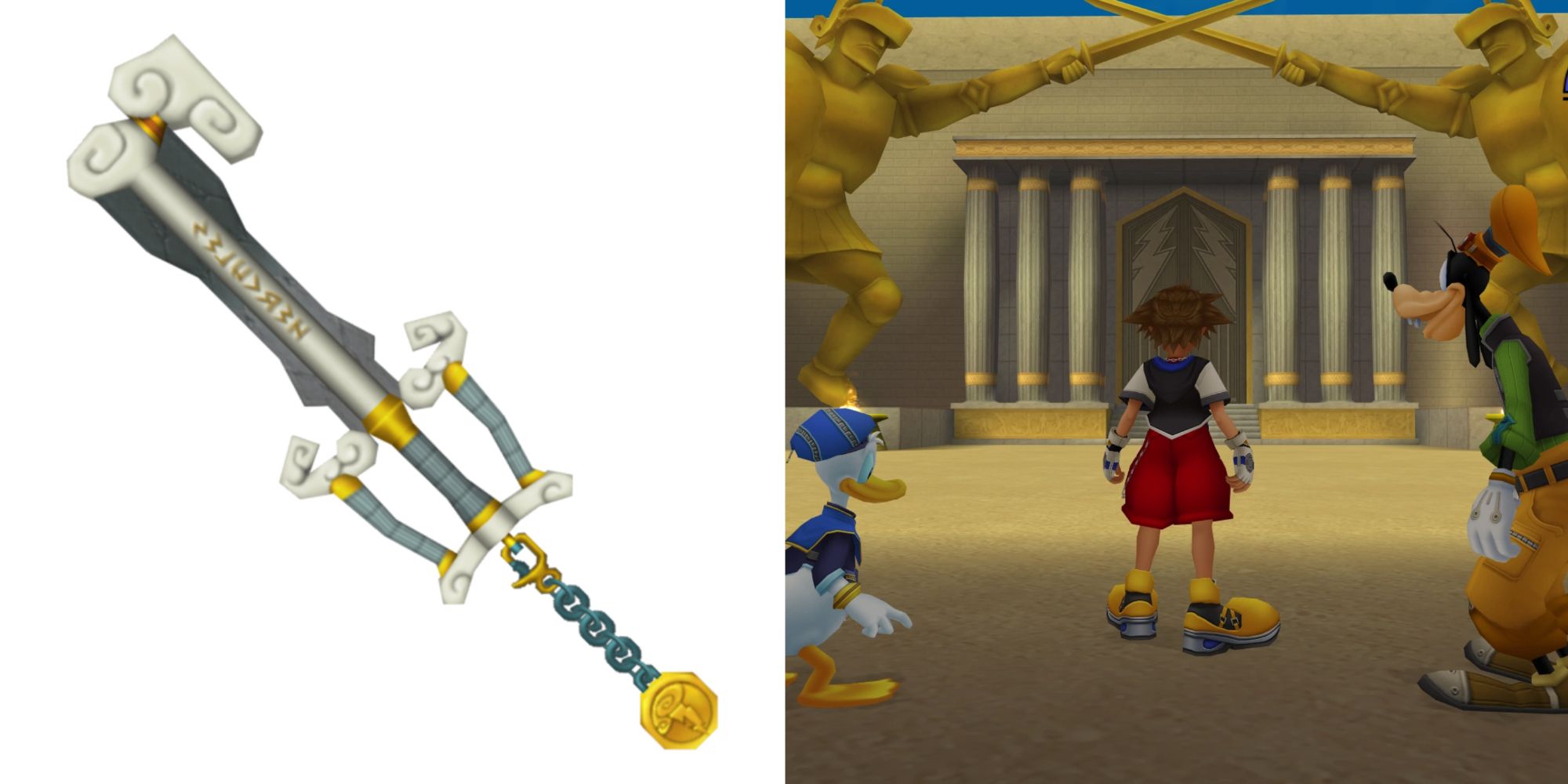 The Olympia keyblade is a classic Disney-themed weapon first seen in Kingdom Hearts as one of the keyblades you can receive at the Olympus Coliseum. Virgos may gravitate toward Olympia because of how the keyblade is unlocked: by competing in a series of combat tournaments. Virgos value structure and would appreciate this organized, methodical approach.

Virgos also have great attention to detail, which would allow them to spot enemies’ weaknesses and know the perfect moment to strike. This natural tendency works well with Olympia’s own strengths, as the keyblade is a great choice for landing critical blows with the right timing. 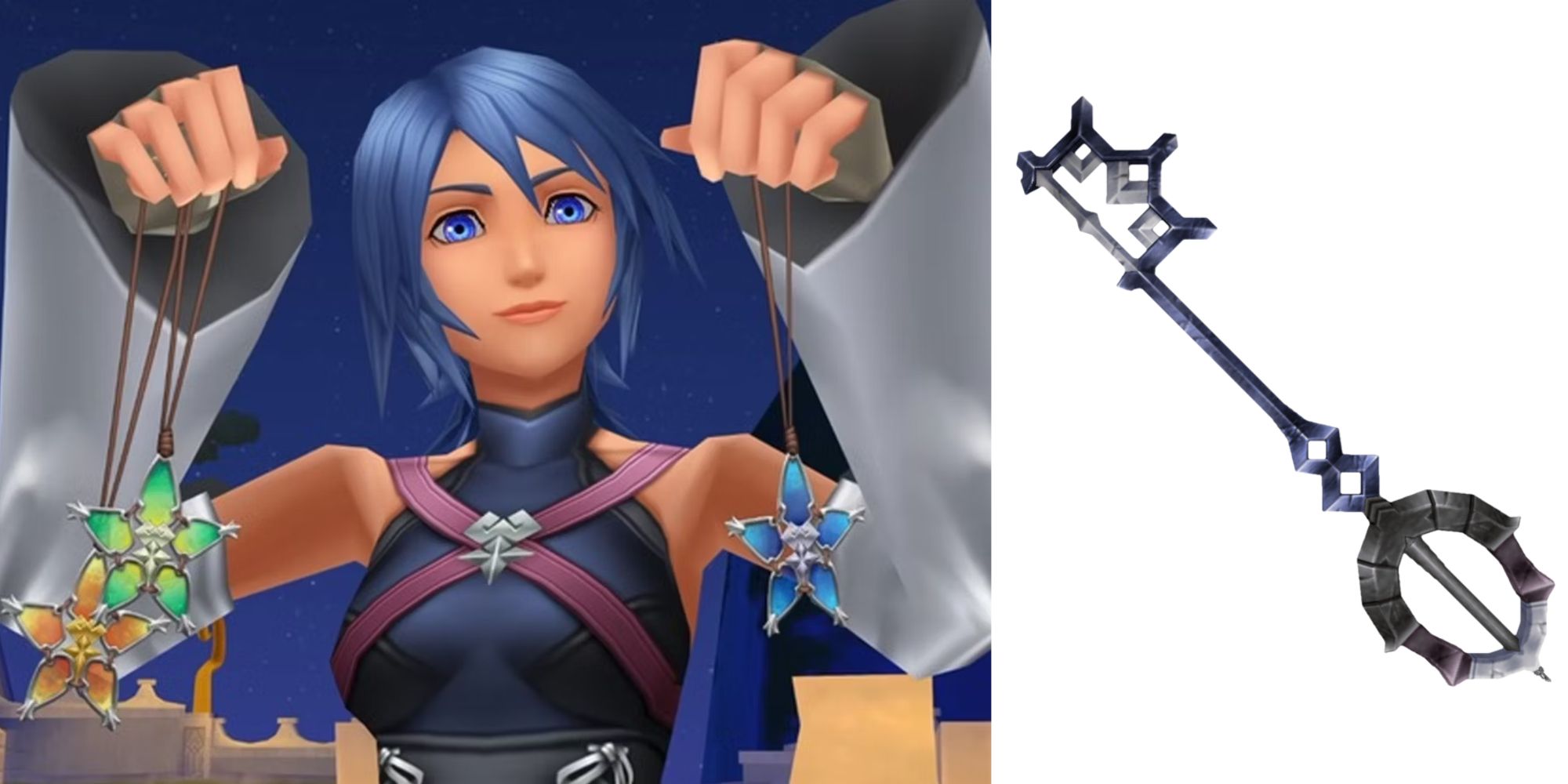 Stormfall belonged to Master Aqua before she sacrificed herself to try and save Terra in Birth by Sleep. The keyblade’s major strength lies in its balanced stats across strength, magic, range, and critical hit rate. Libras, as champions and seekers of balance, would like this keyblade’s evenly spread abilities.

Libras are also known for their desire for harmony and loyal friendship, traits they also share in common with Stormfall’s original wielder, Aqua. 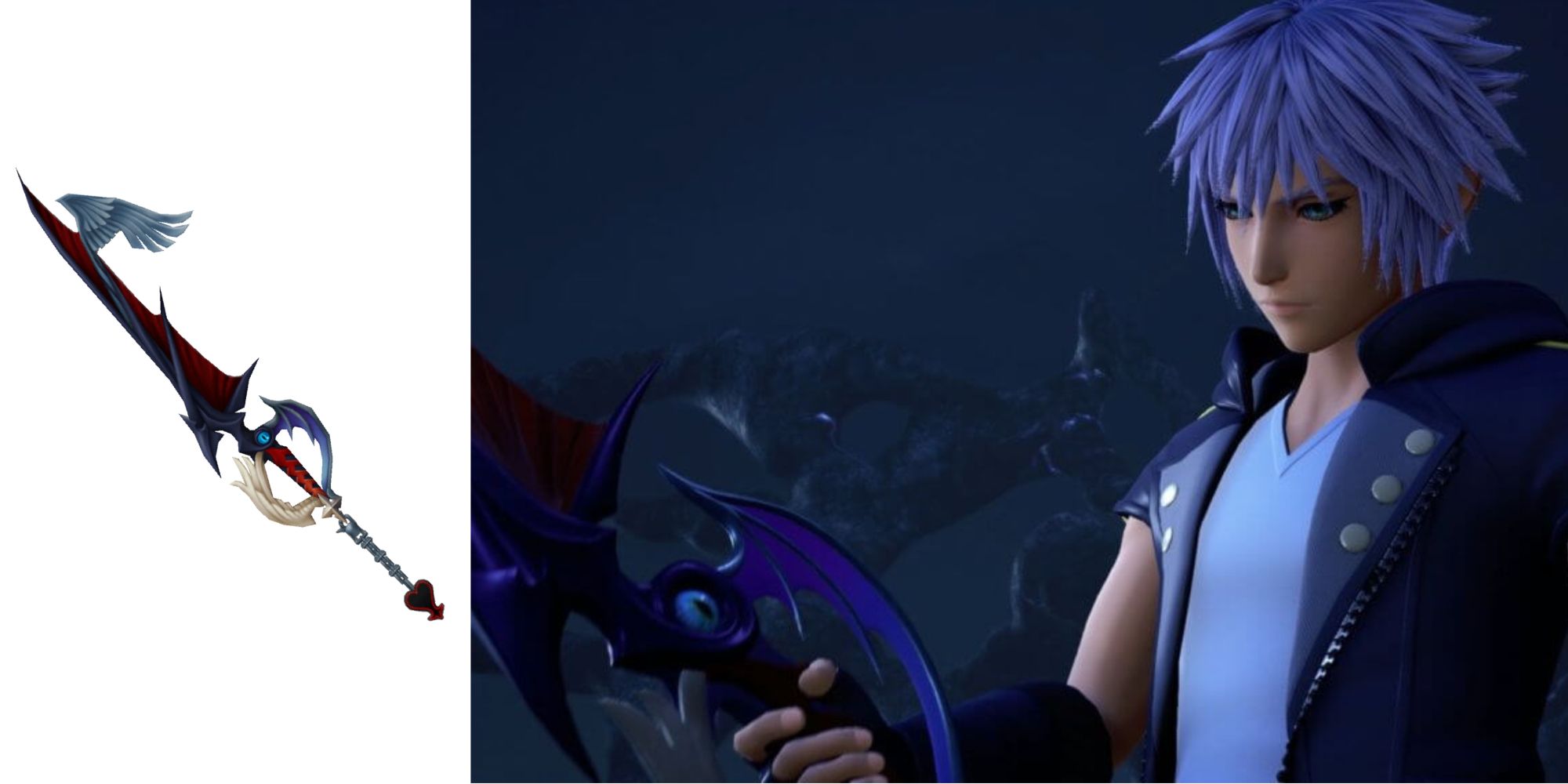 The Way to the Dawn keyblade belongs to Riku, who first summoned it in Kingdom Hearts 2. Its name and appearance reflect Riku’s struggle to find peace with the light and the dark at war within him. Scorpios, with their own instinctive cunning and resourcefulness, would seek a similar approach, wanting to use both the powers of light and of darkness. This makes Way to the Dawn a good choice for Scorpios.

Riku’s ambition caused him to give into the darkness, yet after the events of Kingdom Hearts, he is passionate about doing whatever it takes to fix his mistakes. Scorpios can also relate to Riku’s journey, choices, and motivations, further strengthening their connection to the Way to the Dawn keyblade. 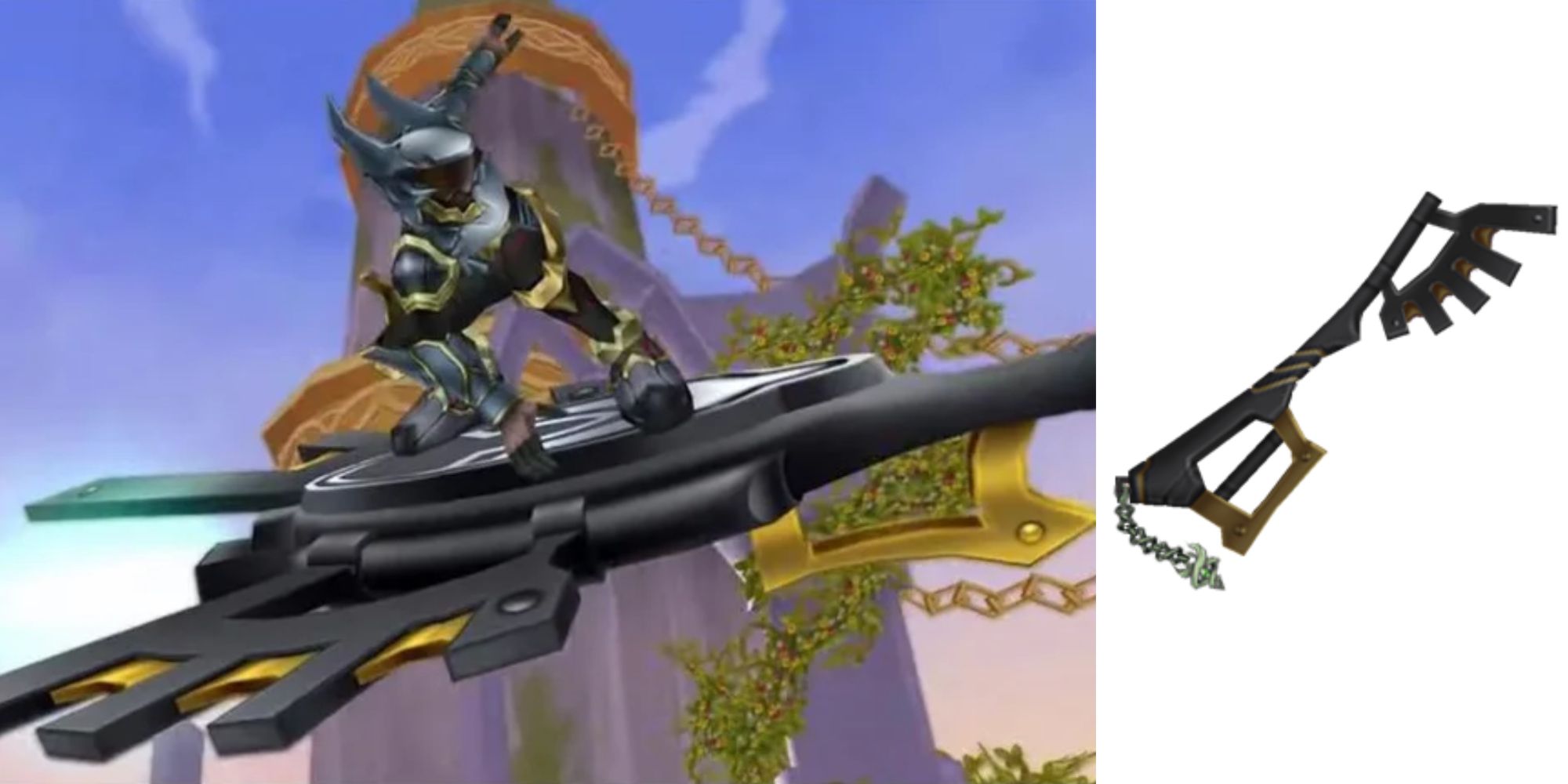 Sagittariuses are free spirits who find joy in embarking on spontaneous adventures. They are lighthearted and draw others to them with their unquenchable optimism. For those reasons, the Wayward Wind keyblade, Ventus’s weapon seen in Birth By Sleep, is a good match for them.

The name “Wayward Wind” reflects Sagittariuses’ natural desire to wander and go wherever the wind takes them. Wayward Wind is also one of the few keyblades known to transform into a Keyblade Glider, a vehicle Sagittariuses would have an absolute blast riding. 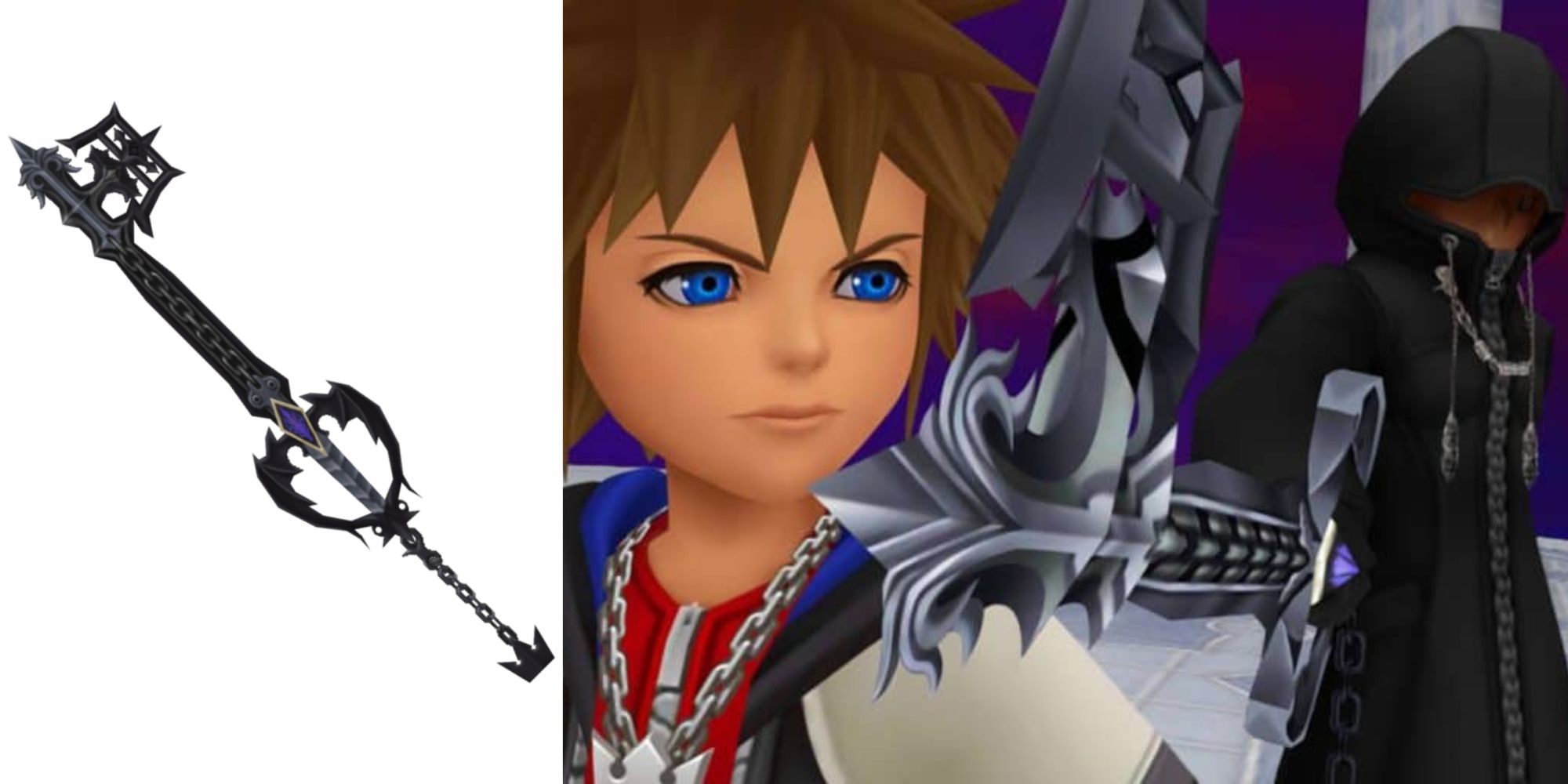 Oblivion is the best keyblade for Capricorns, whose stoic nature and inner drive would allow them to wield this powerful weapon extremely well. Capricorns are also fairly reserved and withdrawn, which may draw them to the simple, dark design of Oblivion.

Oblivion, a consistent staple of the keyblade arsenal since the beginning, is typically received late in the story and boasts one of the highest strength stats. Waiting until near the end of a game to receive the keyblade wouldn’t be a problem for Capricorns, who are patient individuals.