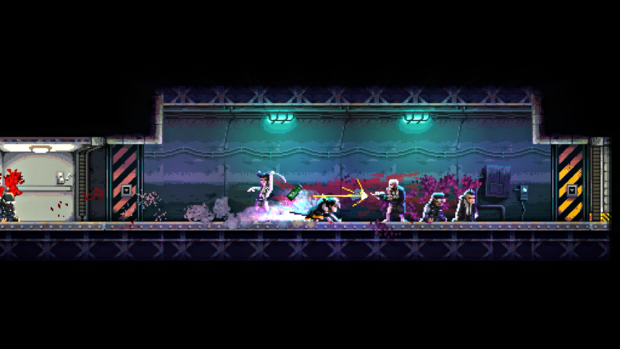 Don’t let the pixel art fool you, Katana Zero is a difficult game. The Dragon can be killed in one hit, but with instant respawns it feels conducive to experimentation – especially with many screens having the potential for multiple routes to success.

It also helps negate some cheap feeling enemies – one level has you reach the end and call an elevator, only for a guard to emerge from it and shoot you, forcing a replay of that screen.

Katana Zero’s low-fi aesthetic makes it feel decidedly grindhouse in nature, but it plays excellently in both handheld and portable modes – even with several enemies attacking at once.

This ballet of ever-escalating violence is set to one of the best soundtracks in recent memory, a shimmering mix of synths and laid back drum machines that calls to mind the smoothness of the movie Drive. 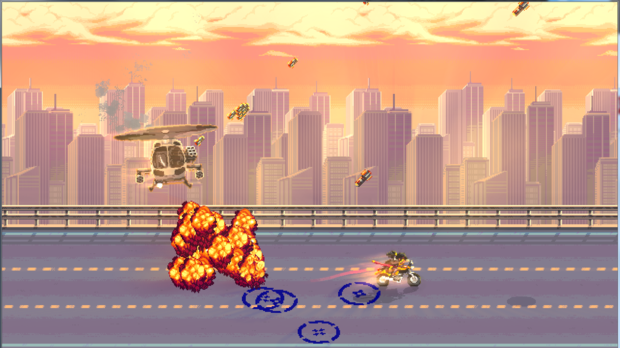 Between missions, your mysterious character visits his therapist, and their back and forth, combined with numerous dialogue options, make conversations feel almost as rewarding as combat – which is saying something.

The story also plays out within missions themselves, and dialogue options are darkly comedic throughout – there’s something very wrong in our protagonist’s mind, and pushing through the 5-hour story to find out exactly what feels truly engaging.

To spoil too much would be cruel, but I found myself either thinking about the plot while not playing, or taking the Switch with me just to find out more.

Unfortunately, that’s the only gripe one can level at Katana Zero – I just wish there was more of it. What’s here is so excellent and so polished, that it seems churlish to want more.

Thankfully, the myriad dialogue options open up new avenues of the story (albeit in minor ways), and when a game feels this good to play it isn’t likely to feel like a chore.

With an exciting, challenging core combat loop, sumptuous visuals and a Spotify-worthy soundtrack, Katana Zero is one of the finest additions to the Switch’s library in 2019. Skip it at your peril – it may just be one of the best games this year, period.