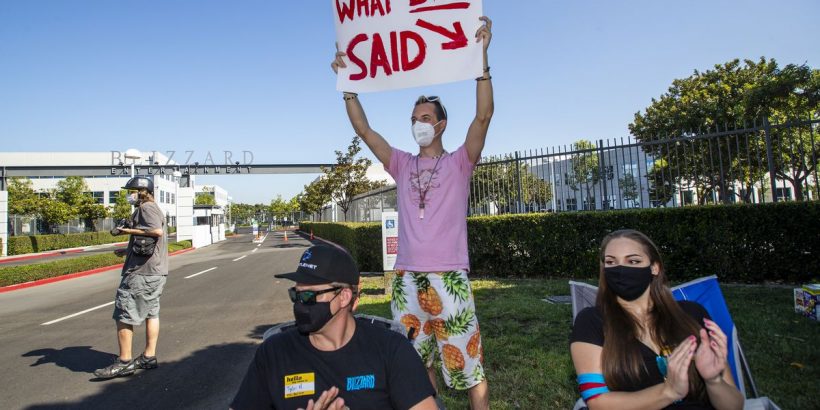 When she stepped down from her brief position as co-leader of Blizzard Entertainment, Jen Oneal said she was leaving “not because I am without hope for Blizzard.”

Turns out, maybe she really was.

The Wall Street Journal on Tuesday reported that Oneal, who turned over Blizzard’s leadership to Mike Ybarra on Nov. 2, sent an email in September in which she said she had little faith Activision could turn around a toxic workplace shot through with sexual harassment and discrimination.

“It was clear that the company would never prioritize our people the right way,” Oneal wrote. “I have been tokenized, marginalized, and discriminated against.”

Oneal is leaving Activision effective at the end of the year; she will focus her professional efforts on the nonprofit organization Women in Games International, where she is already a board member. Activision, in announcing Oneal’s resignation on Nov. 2, said it had made a $1 million grant to the organization.

“[Activision Blizzard’s] leadership is graciously offering their support for my decision and has worked with me on a plan to invest in the future of other women in the gaming industry,” Oneal said then. “This money will be used to fund skill-building and mentorship programs.”

Oneal went on to call Ybarra “unbelievably supportive throughout my decision-making process around this move,” and said “Blizzard’s best days are ahead.”

“I truly believe that,” she added. “I also am hoping this letter helps you to think about what you can do to make everyone around you — no matter their gender, race, or identity — feel welcome, comfortable, and free to be themselves.”

In the email reported by the Wall Street Journal, Oneal — who is Asian American and gay — seemed to feel anything but the same way. She also described attending a 2007 party, with Activision chief executive Bobby Kotick, in which scantily clad dancers performed on stripper poles.

Activision said Kotick didn’t remember attending that kind of a party 14 years ago. The company also gave a broader statement calling the Journal’s report “a misleading view of Activision Blizzard and our CEO.”

To the Journal, Oneal said in an email that she had made a decision that was best for her and her family.

Oneal had been the chief of Vicarious Visions, an Activision-owned support studio folded into Blizzard in January. She then became executive vice president of development for Blizzard, and held that post until August, when Blizzard president J. Allen Brack stepped down in light of a workplace discrimination and harassment lawsuit brought by California regulators. Oneal and Ybarra took over Brack’s role leading Blizzard.