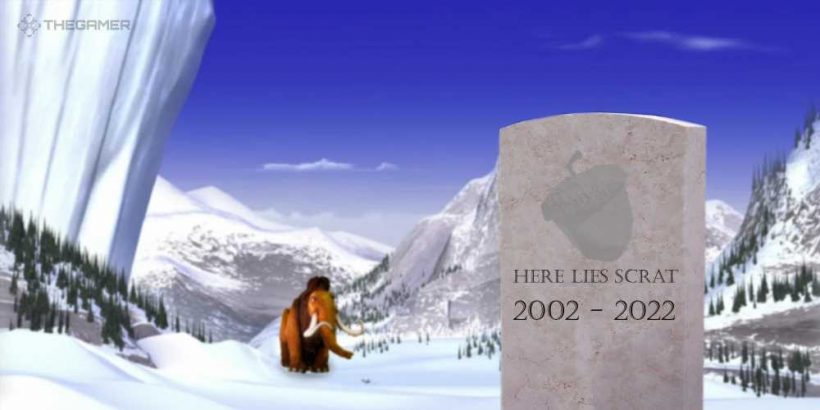 Scrat is one of the most endearing characters in the entire Ice Age series. While he rarely has any interaction with the rest of the cast (and has no lines), he is the thing we most often think of when we think of Ice Age. The luckless squirrel who just wants to keep his acorn safe, Scrat goes through peril to keep hold of the precious nut, only to cause disaster after disaster as his attempts to safeguard his precious nutty pal leads to avalanches and ice sheet breakages galore. Now, 20 years later, my boy finally got to nut. Unfortunately though, Scrat will never nut again.

Did I write this whole thing just so I could make a headline about how Scrat finally nutted? To be honest, that’s only about 40 percent of it. Okay, 50. 60. 75 percent, tops. But while it’s undeniably hilarious (do you get it? See, it’s because ‘nutted’ means something else too. Funny, right?), there is a real point to be made here. Disney recently bought up Blue Sky Studios – the company behind Ice Age, and therefore behind Scrat – but to be more accurate, it bought up Fox, and as a result came into possession of Blue Sky Studios. It's essentially the same as buying a Beverly Hills mansion and suddenly owning the carpet lint, the pebbles that have blown into the pool.

This is no disrespect to Blue Sky Studios, it's more how it appears Disney sees it. In fact, a lot of things Disney bought in the Fox acquisition seem to have been abandoned. Nightmare Alley, a Fox Searchlight picture already fully formed when the takeover was complete, was essentially sent out to die up against Spider-Man: No Way Home during an upward spike of the pandemic. See How They Run, Searchlight's biggest upcoming feature, boasts an all-star cast led by Sam Rockwell and Saoirse Ronan, is due out in a few months, and we know nothing of it besides one on-set photo of Ronan and Rockwell. It, much like Scrat, feels like carpet lint in a deal Disney brokered in order to have the X-Men join the MCU, to cash in on all the money The Simpsons syndication makes, and to bolster Disney+ with a selection of adult-oriented titles.

Ultimately, this deal was the death of Blue Sky Studios. It had one more picture under the ownership of Disney (an Ice Age movie Scrat was absent from, allegedly due to a legal dispute over ownership), and has now been shuttered for good. The pandemic, apparently, was the final blow to it, but it could also be that Disney now owns a lot of animation studios and Blue Sky was one of the less profitable ones. I don't know, but I also don't want to dwell too much on speculating the reasons. Instead, I just want to say a fond farewell to Scrat.

The final video is very simple – it shows Scrat with his acorn, in safety, before chowing down on a nut that tastes all the sweeter after 20 years of teasing. No shenanigans, no bits, no Rube Goldbergs, just the acorn and Scrat. After he devours it, he smiles to himself and walks off. This is the last piece of animation Blue Sky Studios will ever put out, and it wasn't posted by Disney to advertise the new Ice Age Collection on Disney+, it wasn't part of any marketing campaign, it was an unlisted video uploaded to YouTube. Straight from the team to the fans, no middle man. No money, no sales, no last attempt to cash-in on Ice Age's most beloved character, just a fantastic animation studio saying goodbye to all the people who ever enjoyed their movies through the studios very own mascot.

My boy Scrat nutted, and now he can sleep.