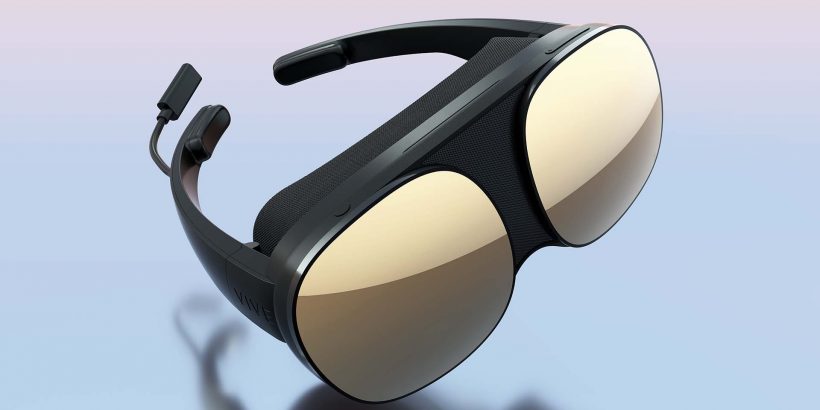 After two weeks of teases, the HTC Vive Flow has been officially announced.

As was previously speculated, Vive Flow is based on HTC’s super-slim concept for a VR headset, Project Proton. The device resembles a pair of glasses with very thick lenses and weighs just 189g. The frames feature two hinges, one to help shift the device to fit a range of head sizes and the other so they can be folded up like a normal pair of glasses. It’s technically not a standalone headset, as the kit must be tethered to an external power source like a battery pack for long-term use. The device has a small onboard battery but HTC stresses this is only intended to power it so you have time to plug it back in to another source. Two cameras on the front provide 6 degrees of freedom (6DOF) positional tracking.

HTC envisions Vive Flow as less of a gaming device and more a headset for media consumption and experiential content. To that end, you connect the device to an Android smartphone to use as a 3DOF controller and also mirror content to view inside VR. There are also native apps, and the company highlighted meditative experiences like TRIPP and Nature Treks VR. HTC also plans to bring hand-tracking support to the device in the future, though this won’t be available at launch. iPhones aren’t supported.

Specs-wise, Flow features 1.6K per-eye resolution, a 100-degree field of view and a 75Hz refresh rate. HTC declined to reveal exactly what processor the device was using, although you definitely shouldn’t expect the same performance as the Oculus Quest 2. The lenses employ diopter dials so you can twist them to find the best visual clarity. The frames feature a built-in audio solution and dual microphones, plus there’s active cooling at the front of the device.

Pre-orders for the Vive Flow go live today on the official site and the device costs $499/€549. Units will start shipping in early November and those that pre-order will also get the protective carry case HTC has been teasing thrown in for free along with seven pieces of content, though exactly what those are hasn’t been revealed.

What do you make of the HTC Vive Flow? Let us know in the comments below.