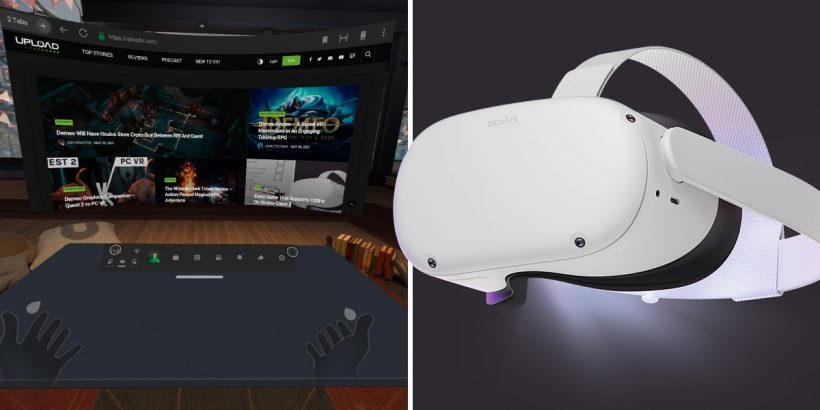 With the new v28 update for Quest, access to the new Infinite Office desk feature is slowly rolling out. Here’s how to bring your desk into VR on Oculus Quest.

As part of v28, Facebook is introducing a new feature that lets you bring your real desk into VR, as part of a gradual introduction of Infinite Office features.

Up until recently, some users who had the v28 update still didn’t have access to the desk feature, but reports from UploadVR staff and users on Reddit indicate that it’s finally being made widely available.

Bringing your desk into VR is considered an experimental feature, so it’s listed under the Experimental Features tab of your Quest settings menu, pictured below.

This will restart your headset and, in some cases, make the desk feature appear on the experimental features list after the restart is complete. UploadVR staff were able to gain access to the feature using this method. If it doesn’t show up, though, you likely don’t have access to it yet.

As the name implies, this may also reset your preferences for other experimental feature settings such as Air Link, 120Hz and more. If so, just turn them back on – that being said, we found that all our features remained enabled even after the reset.

Setting Up Your Desk

Once you’ve got access to the feature, bringing your desk into VR is pretty easy.

Make sure you’re sitting in front of your desk, then press the Add/Remove button next to Bring Your Desk Into VR.

This will switch you over to the passthrough cameras, where you can define the length of your desk by touching your controller to one end of your desk, holding down your trigger and then moving the controller along the desk lengthways until you reach the opposite corner.

Next, you can place the controller face down on the desk and press the trigger to define the desk height. Once you’ve finished setup, the desk selection should line up with your real-life desk, as per the picture above.

Confirm your selection and you’re done – your Quest will now display your real-life desk in VR, as pictured below.

If you want to take your VR office setup even further, you can pair up a Logitech K830 bluetooth keyboard via experimental features as well, allowing you to see the keyboard in VR and have it synced up to your Quest. This is only available on Quest 2.

While you do need the specific Logitech keyboard for it to work, this brings you one step closer to having a fully functioning virtual office on Oculus Quest 2. You can find the keyboard setup process in the same Experimental Features menu in the settings.

Have you tried bringing your desk into VR? Let us know what you think in the comments below.