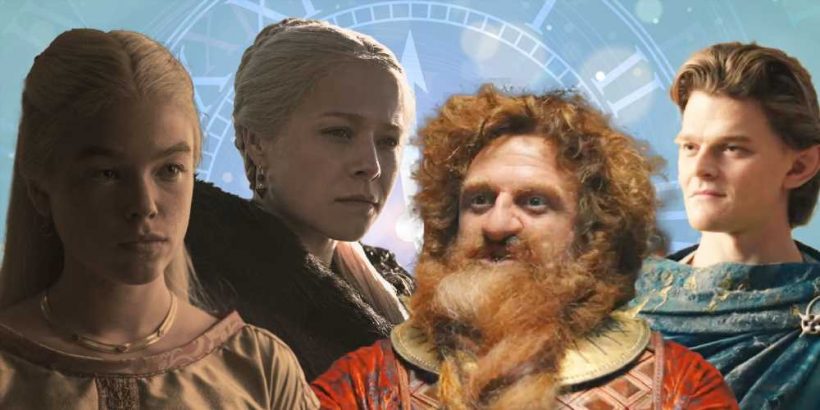 I hate to compare this year’s two biggest fantasy shows (sorry The Sandman, your canteen episode was brilliant but didn’t quite make the cut), but I’m going to do it anyway. I find a lot of the comparisons forced and a little lazy if I’m honest, especially as they’re trying to tell different stories. House of the Dragon tells a story with narrow scope and laser focus – both compliments – whereas The Rings of Power is cramming the events of an epoch into 50 hours of television. At the end of the day, they both have mythical creatures and some semblance of magic, so comparisons will be rife, especially in a time where many fans feel that other shows’ successes are personal attacks.

However, they both tackle time in very different ways, and that feels worth analysing. As I mentioned earlier, The Rings of Power has compressed the timeline of Tolkien’s Second Age, something that myself and other fans were understandably worried about prior to the show. Despite the fact that I think it should go back in time in season two, over the course of the first season this time compression was largely handled well, the Balrog excepted. I’ll have to write about Durin’s Bane another time, but basically the show has skipped the thousands of years where very little happened between Sauron forging the titular rings and the Númenorians deciding to get properly involved with Middle-earth. That’s deliberately vague to avoid spoilers for those who haven’t read the books, before anyone cries out about the settling of Lond Daer, the Battle of the Gwathló, or other barely relevant events.

House of the Dragon, on the other hand, handles the passage of time very differently. At two points during the ten-episode first season the show skips forward in time, first by about three years, and second by about ten. Rhaenyra, who probably has the best claim to being called the protagonist of the series, grows from being a child to an adult. She has her own kids, who grow from toddlers to warriors during the second time skip. It’s a clever way of showing how relationships get destroyed thanks to politicking and scheming, and endears you to characters as you watch them grow up. But it also shows how things don’t move quickly in Westeros, not politics nor relationships. The hardship of an arranged marriage hits harder over a decade than it does a week, and schemes can take just as long to plan and pull off.

As well as The Rings of Power handled time in its first season, I can’t help but think of an alternate timeline where it utilised time skips, too. Think about it: each season followed the same Elves, Galadriel on her quest for revenge and Celebrimbor on his for power. Arondir holds The Southlands, who could even start as the ancestors of Bronwyn, Theo, and Waldreg (maybe even played by the same actors in prosthetics?) and in later seasons as they repent and forget their evil ways, he fails to adapt or change his views. Each season, hundreds of years pass and a generation of Humans, Harfoots, and Dwarves die out, but the Elves remain.

It’s a tough sell, but imagine how much more power Durin’s sadness would have when Elrond has missed his wedding and the birth of his children. We’ve watched his ancestors die as Elrond goes about his Elf business, and yet Elrond still misses these important events of his friend’s life? Adding in mid-season time skips as well is probably overkill, but seeing Durin age and Elrond miss his wedding in real time would really hammer down the heartbreak.

It would be a difficult task, that’s for sure. House of the Dragon’s time skips only miss out a few years, not entire centuries. Characters get older, rather than die outright. The writing for a century-skipping version of The Rings of Power would have to be incredibly tight to make you care enough about the human characters in just a season, but House of the Dragon managed that in its first season, so it’s not impossible. Once you know that the human characters are going to die after each season, too it would add a sense of jeopardy and tension too, an air of inevitability.

Would this be a perfect solution to The Rings of Power’s millennia-spanning events? No, it would likely be an inelegant option and compromises with the lore would have to be made, albeit different compromises to those that were made in actuality. We wouldn’t meet Elendil and Isildur until the final season, which would be a shame, and that final season would likely be overloaded with action, too. As I said before, I think The Rings of Power handled the timeline well, but you can’t make great television without taking a few risks so I wish I could see a time skipping version of Middle-earth’s Second Age.