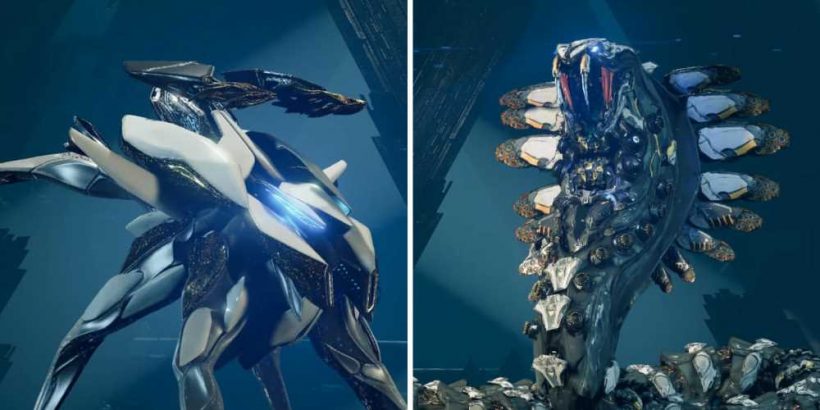 Aloy fights a lot of machines during the runtime of Horizon Forbidden West – some that are familiar from the first game and others that are entirely new to Forbidden West. There are even variations of machines based on elemental factors like the Fire Canister or Frost Canister Burrowers. Or machines that only appear in specific environments like the Tideripper.

The new additions certainly make an impact due to their sheer size and ferocity that make for machines even deadlier than the ones in Zero Dawn. So It's doubtful that anyone would want to go head-to-head with a Tremortusk in real life, but with Aloy, it shouldn't be a problem. 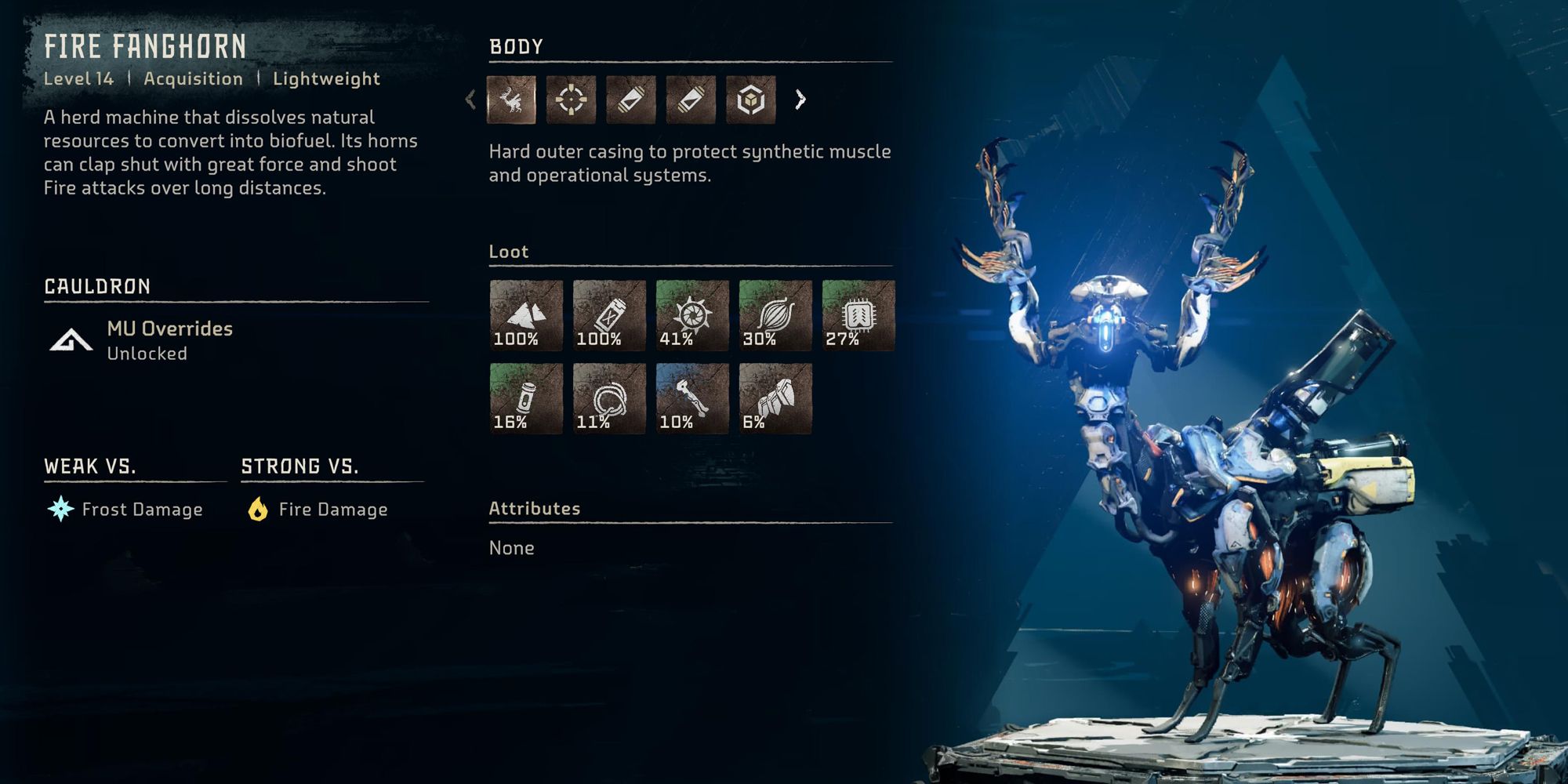 Fanghorns are almost like a variation of the Grazer machines seen in Horizon Zero Dawn and are one of the first machine types to appear in Forbidden West. Fanghorns can be difficult to defeat once they begin shooting their fire attacks at you. However, they're especially susceptible to frost damage, so bring a frost ammo weapon along to make the fight go smoother.

Even with being what is essentially a reworked design of the Grazers, the Fanghorns are a lot of fun to combat, with weak spots being more accessible than most to hit and them proving to be a welcome challenge, especially when first delving into the game. 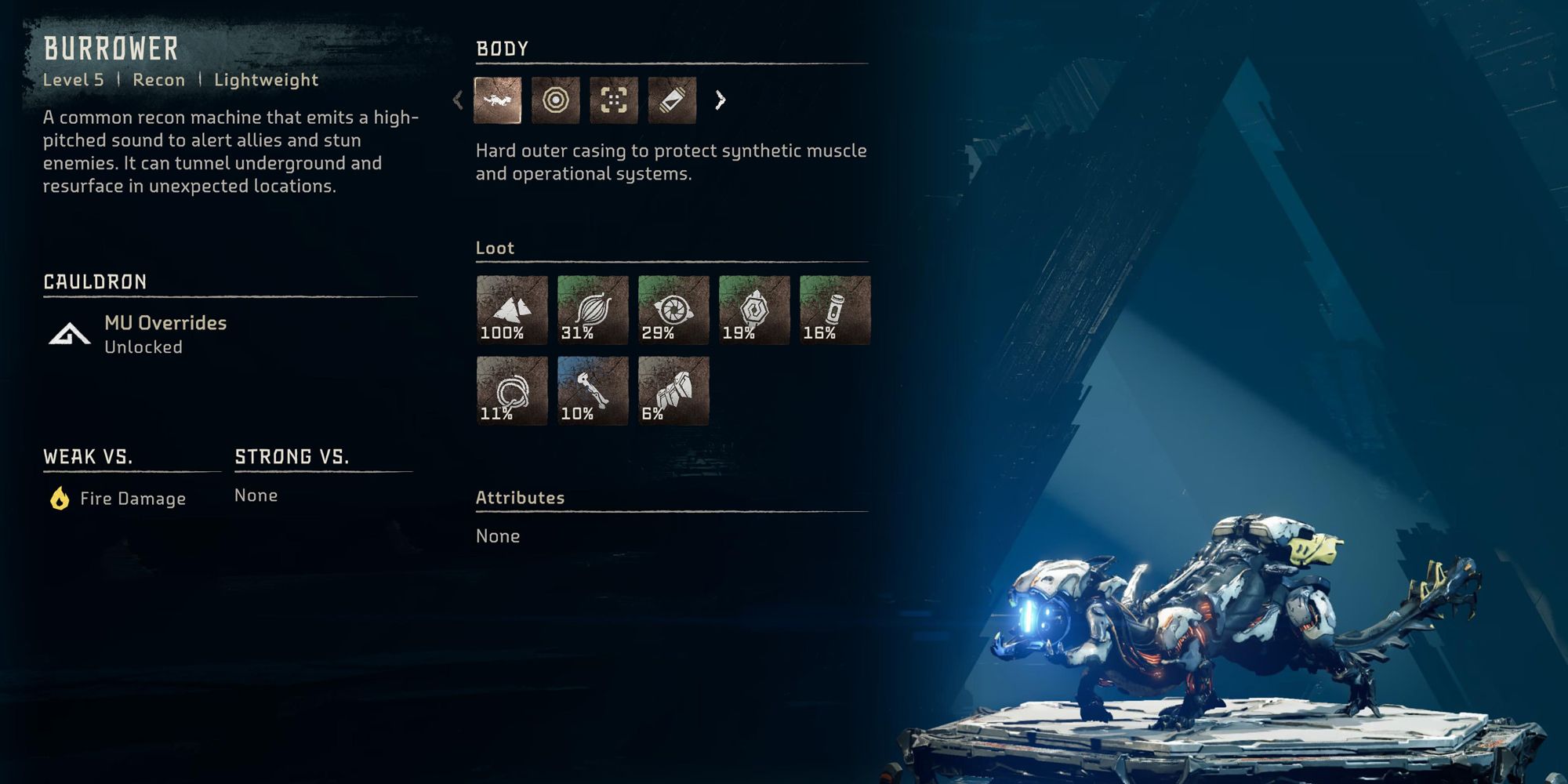 Similar to some other smaller enemies in Forbidden West like the Stalker and Ravager, the Burrower does what it says on the tin—burrowing into the earth to reappear closer to Aloy, allowing them to make quick melee attacks that can catch you off guard if you aren't careful.

They're probably the most common enemy type in the game but shouldn't prove to be too much of an inconvenience. Just watch out for their sound attacks that not only temporarily stun Aloy but also alert their allies to your location. 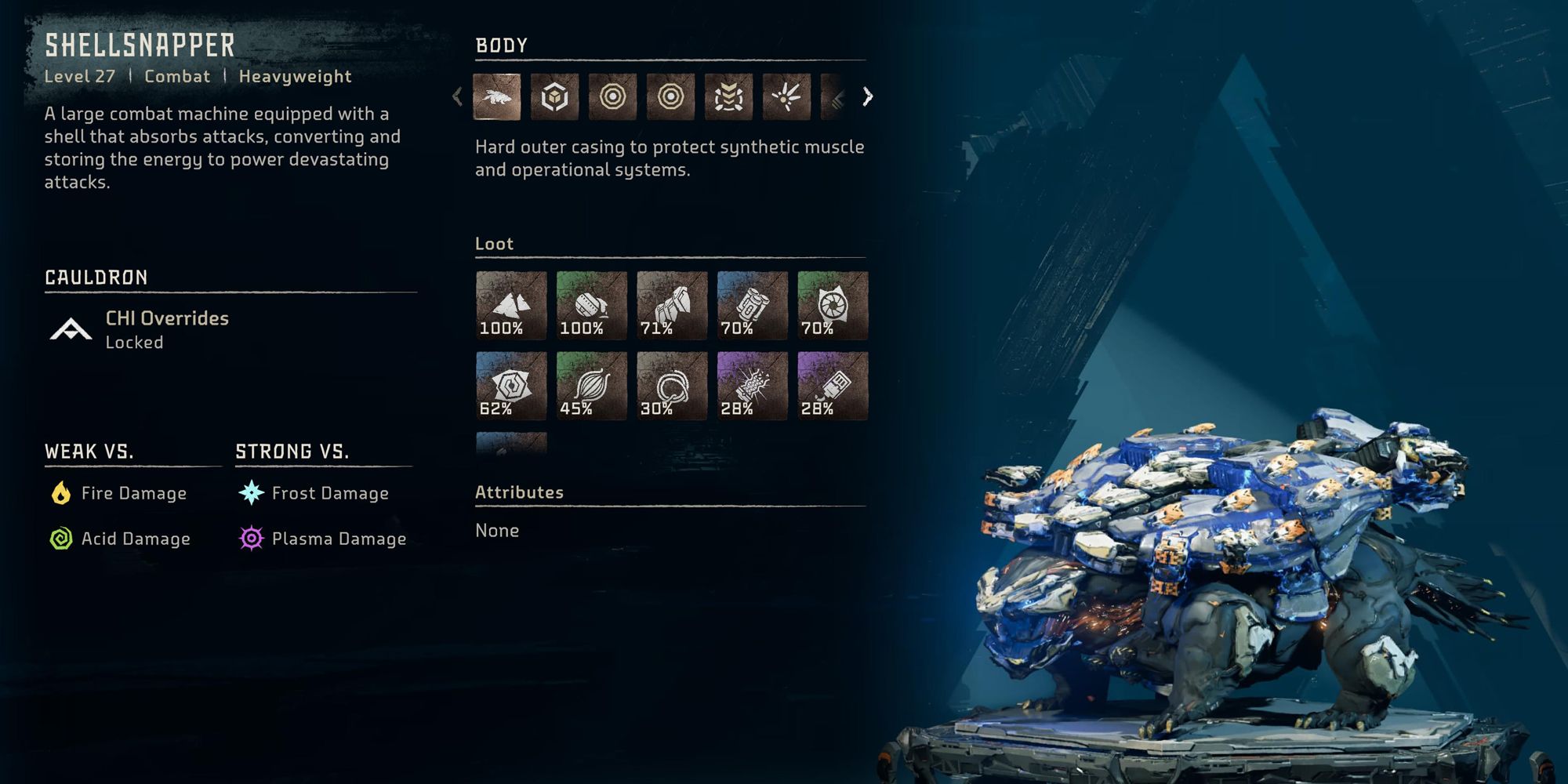 Shellsnappers are heavyweight machines that convert absorbed energy into powerful attacks. These attacks can be deadly in some situations, so don't underestimate these creatures. Fire and acid are good for dealing consequential damage where frost and plasma are not.

Whenever a Shellsnapper appears, you can feel the weight and power of the machine; the first few times they show up can be pretty daunting. So try to take out heavy machines like the Shellsnapper before anything else. 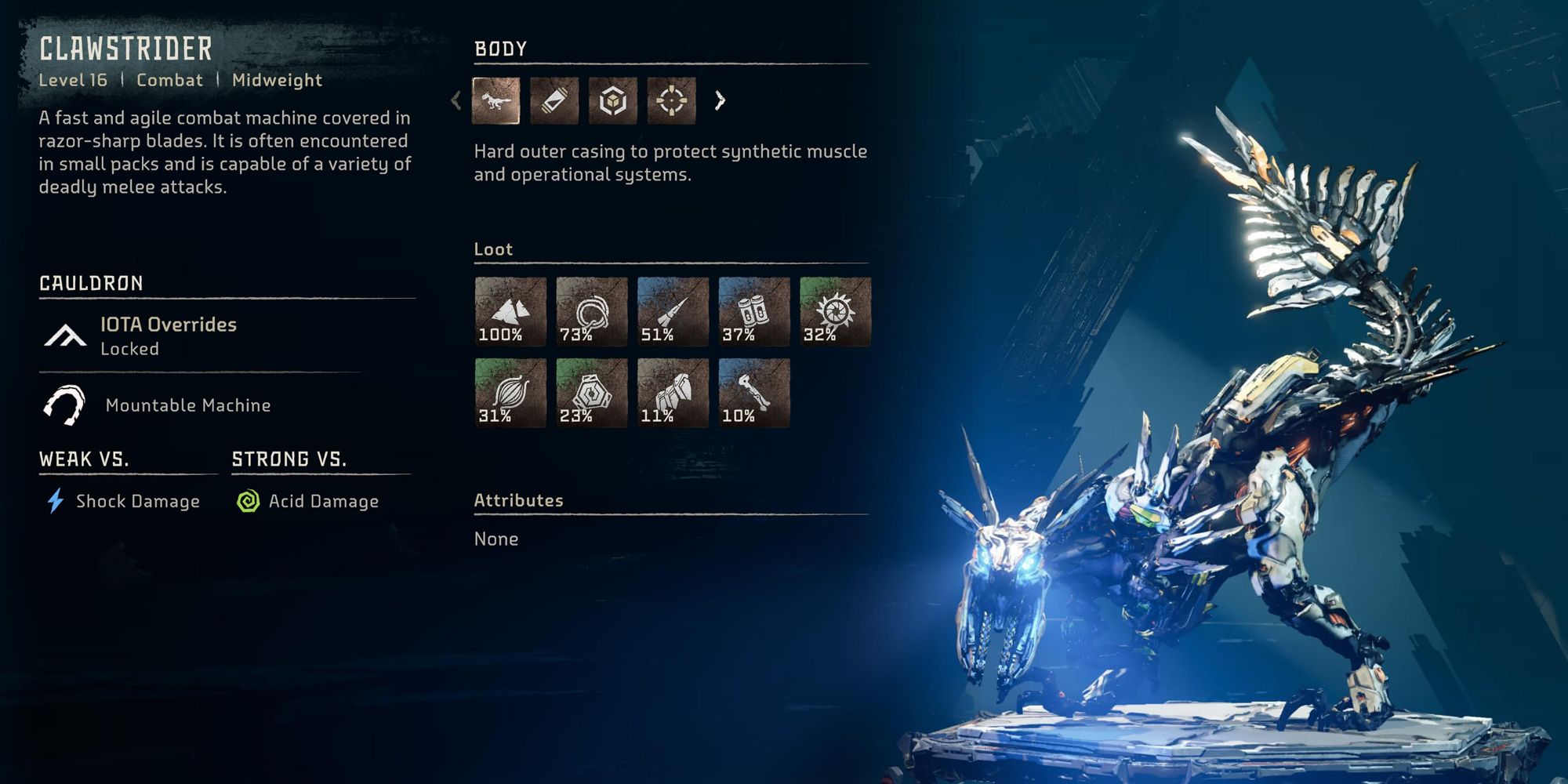 Clawstriders are fast, agile machines that can be mounted once overridden. Because of their speed and razor-sharp blades, their attacks can be fatal if you become stun locked. Keeping your distance and using a fast-firing bow is the fastest, most effective way to kill them as they usually travel in small packs.

Clawstriders are a fantastic choice of mount since they can travel long distances extremely fast. They also just so happen to have one of the coolest machine names in the game. 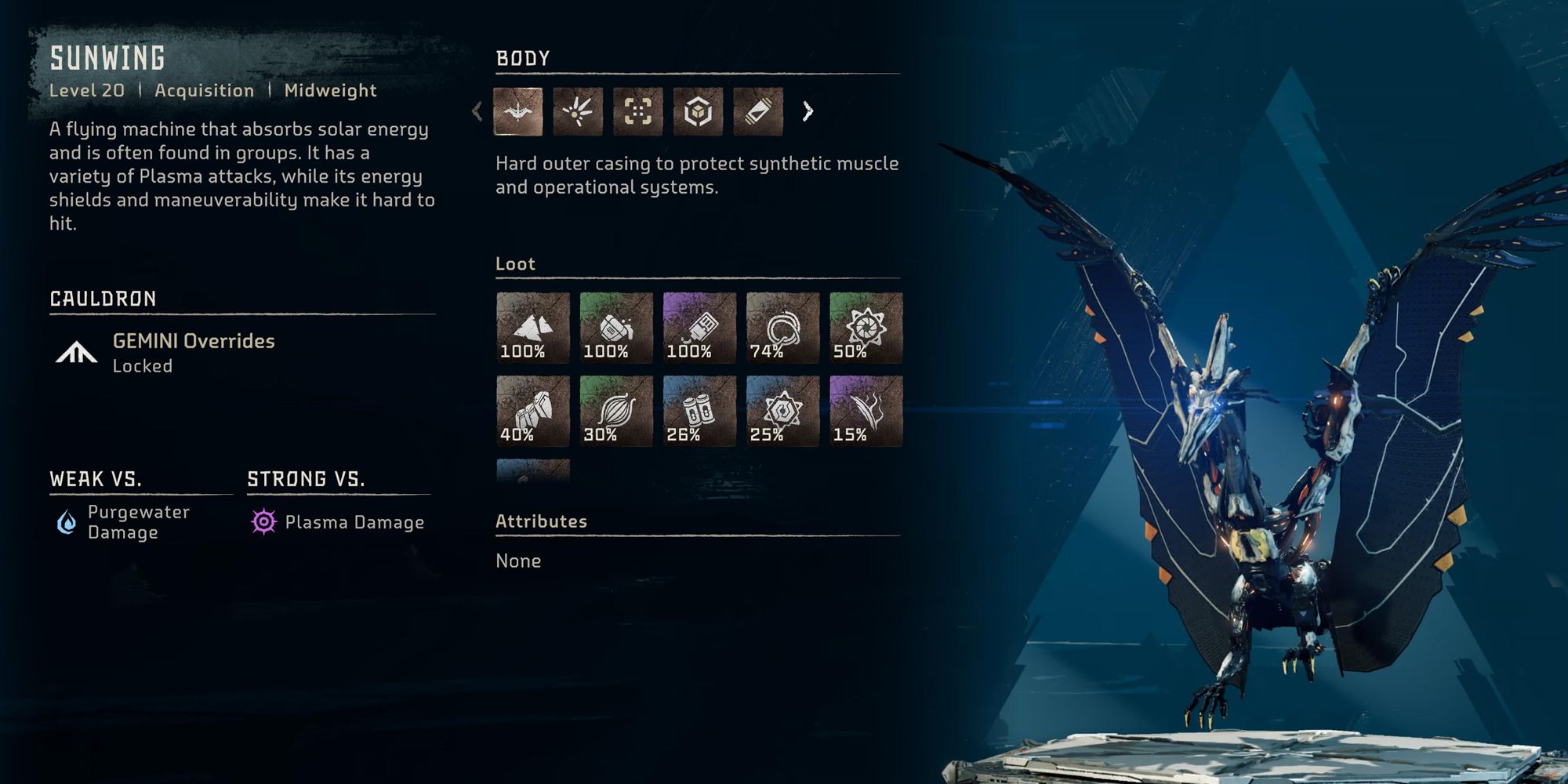 Sunwings are strong to plasma attacks but weak to purgewater. Therefore, any purgewater traps along with ropes to tie them down are a quick way to take down a Sunwing. After completing a late-game mission, Aloy will have the ability to override them, making it easier to reach certain areas and traverse the map.

They're also one of the most entertaining new machines to fight since you'll need to make use of dodging and a quick aim to hit the weak spots. 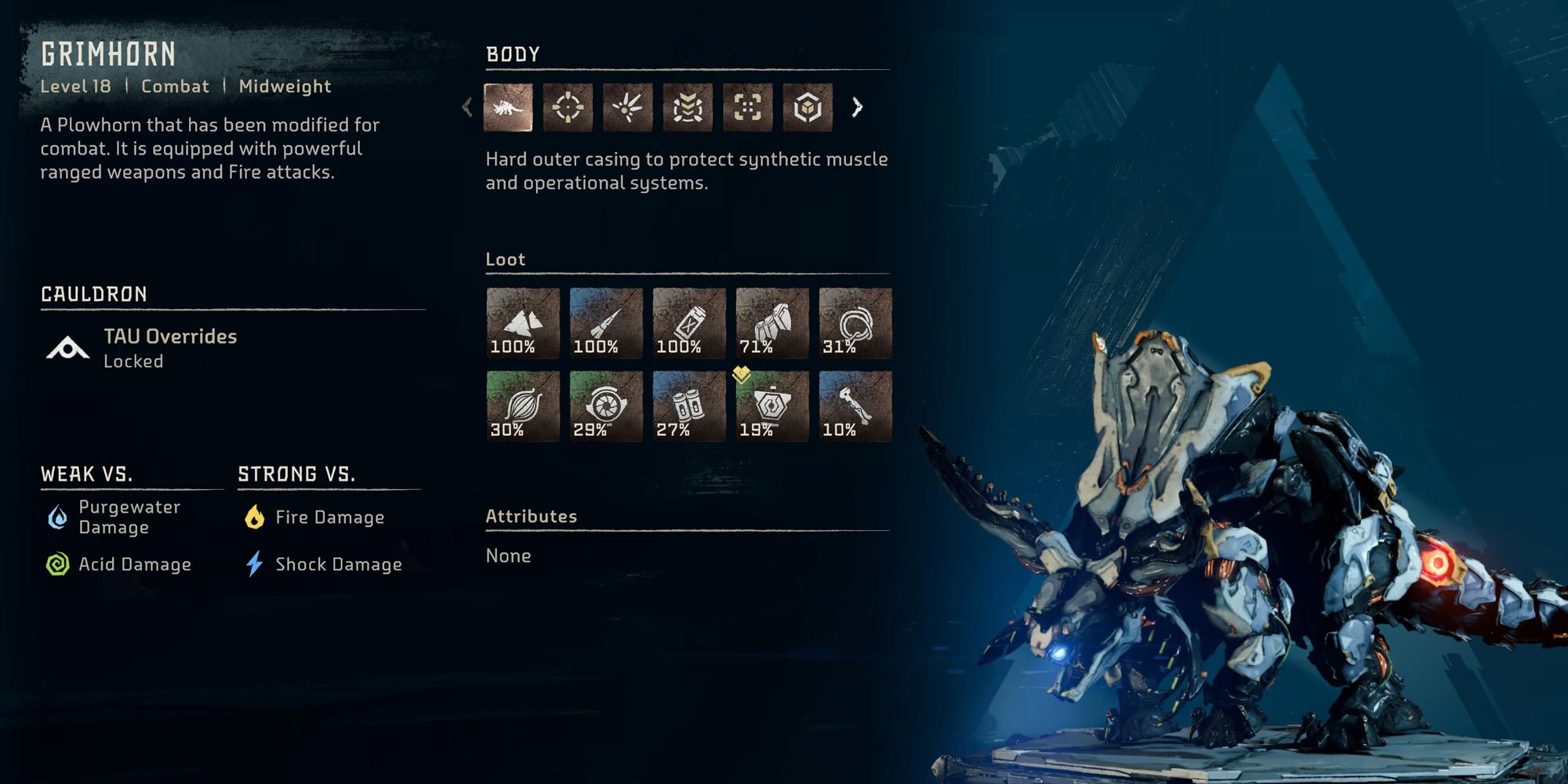 Grimhorns were originally Plowhorns, augmented for combat rather than working on farmland. These machines can be highly aggressive once Aloy has been spotted and tend to fire using ranged attacks. Grimhorns are strong against fire and shock damage but weak against purgewater and acid.

You can remove the Cluster Launcher's from the Grimhorn to use as a heavy weapon, aiming at other weak points to take them down fast. These enemies look great and give off some pretty decent loot no matter how you approach battling them. 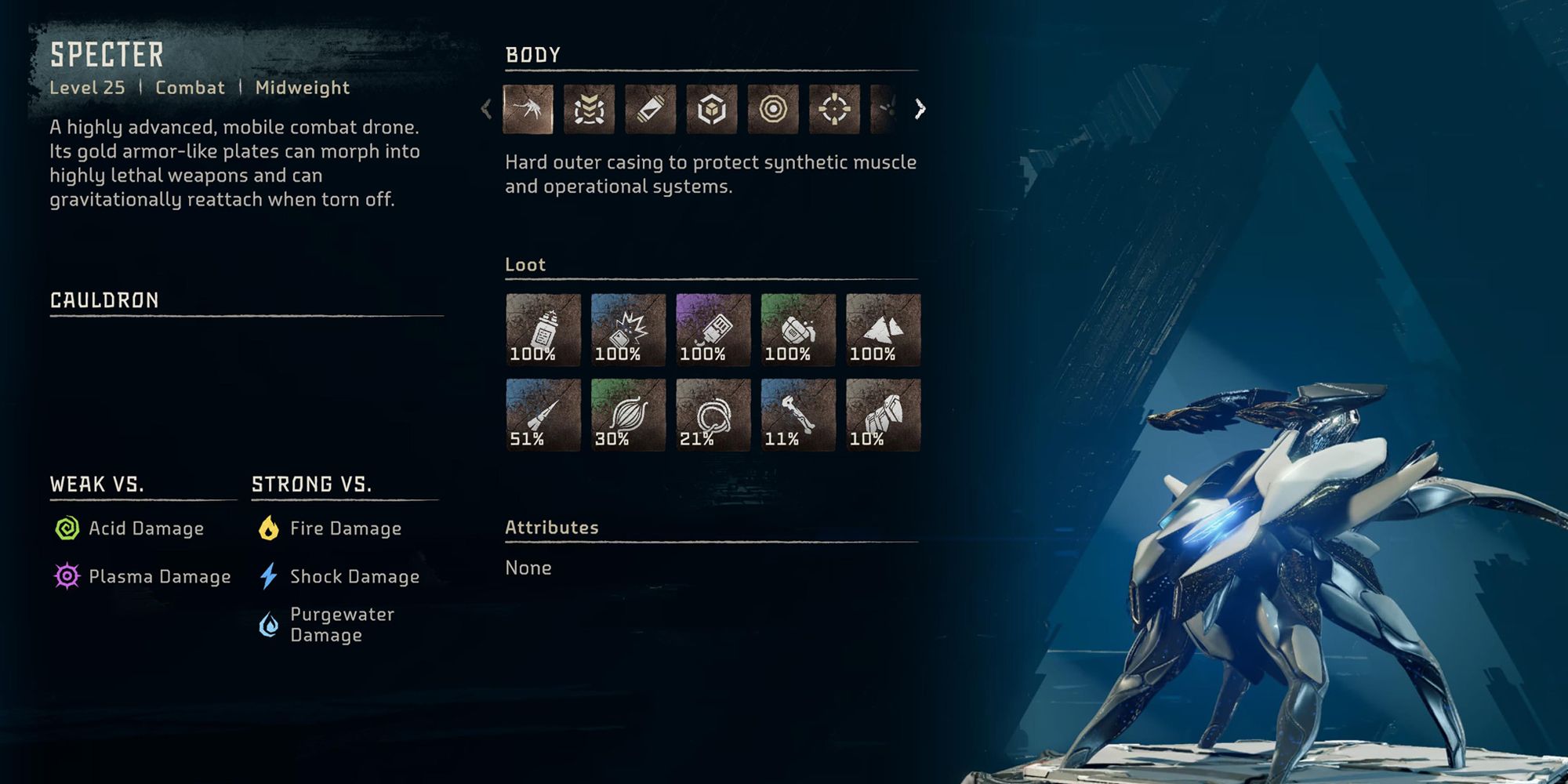 Being the first technology shown in the Horizon series to surpass the advancements of old-world tech, the Specters are machines of the Far Zenith. The first time the Specters are shown is during a cutscene where Aloy must escape with GAIA; from just that moment alone, we know these machines won't be easy to take out.

The designs of the Specters with the clean look of the different components make for one of the best-looking designs in Forbidden West, designs that belong to highly formidable enemies. 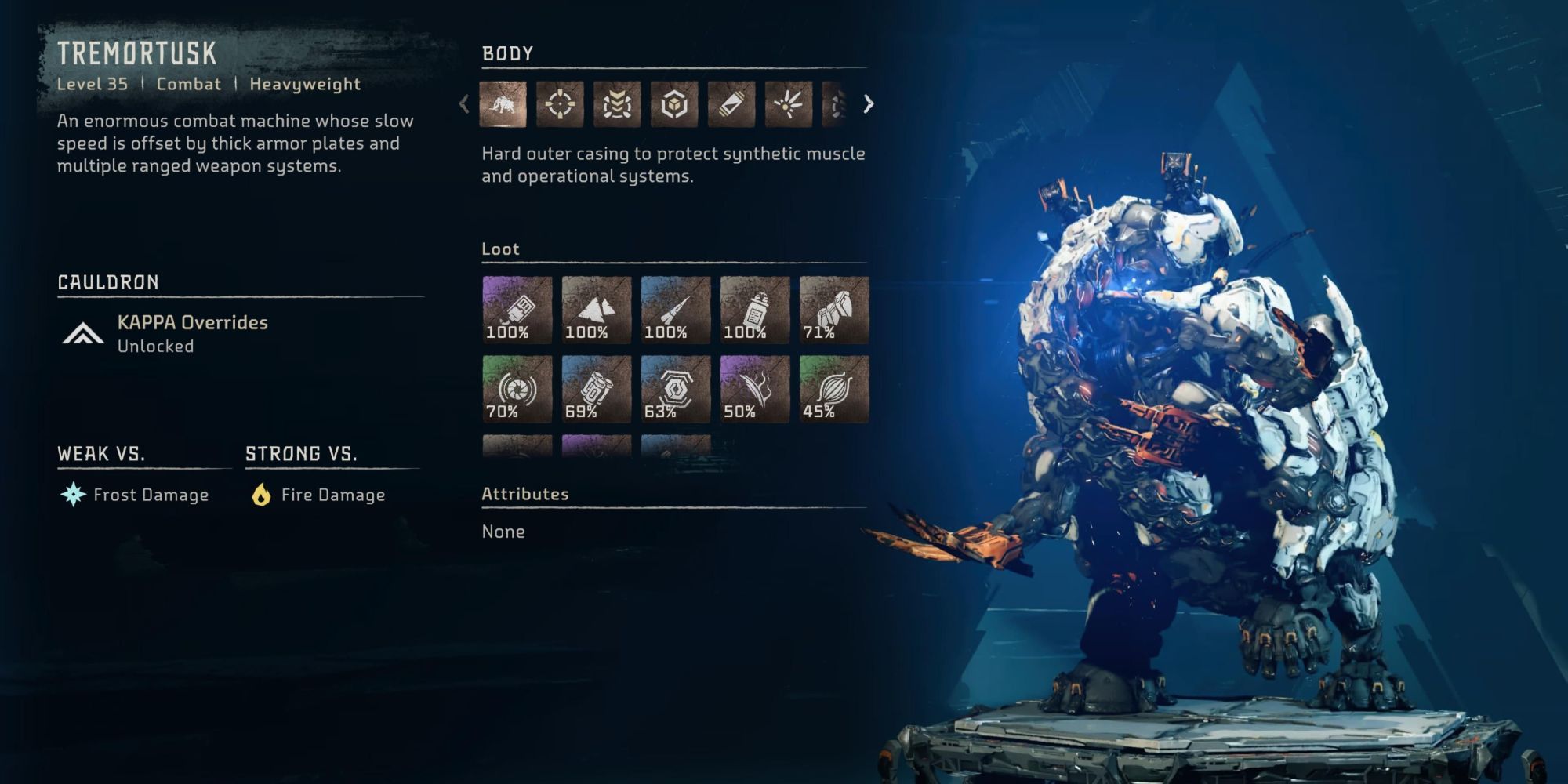 Anyone who followed promotional footage for Forbidden West will already be familiar with the iconic Tremortusk, a machine shown to be overridden by Regalla's rebels. Playing through the main quest, you'll eventually fight a Tremortusk during your search for AETHER, which is when you'll spot just how vicious its ranged attacks are.

Luckily, the Tremortusk moves slowly because of its hulking size, but it's still best to keep a lengthy distance. They're weak to frost damage and strong to fire but reward you with valuable loot once defeated. 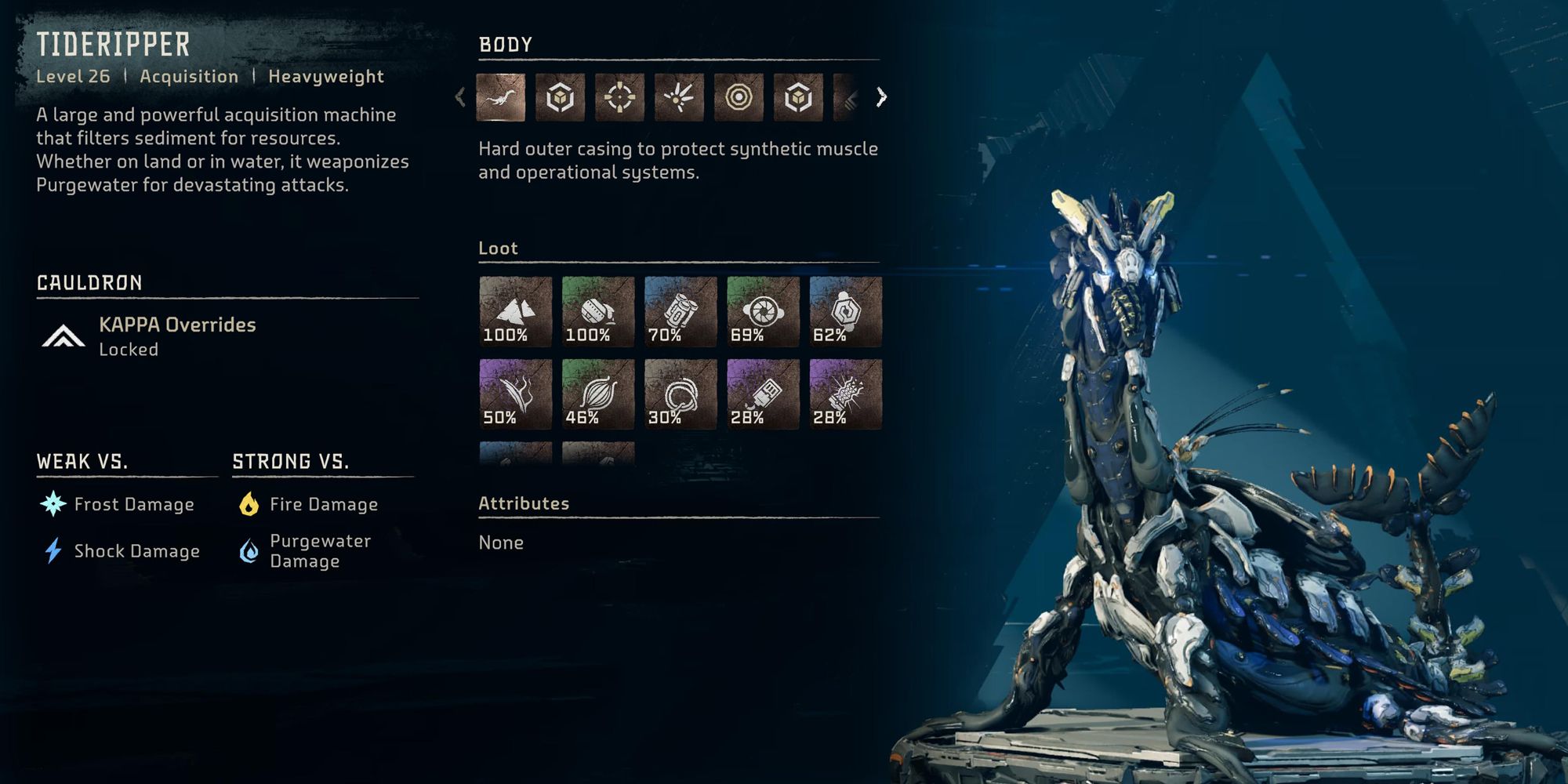 The Tideripper will most likely be first encountered during the Las Vegas part of the game, where Aloy searches for POSEIDON. All the build-up before fighting this figure is executed incredibly well, with the Tideripper proving to be a terrifying foe to face. There aren't many aquatic machines in the game, but the Tideripper is the best example of one.

Tiderippers are vulnerable to frost and shock damage but strong against fire and purgewater. Tying the machine down or attaching canisters to it and shooting them will knock them down in a pinch. 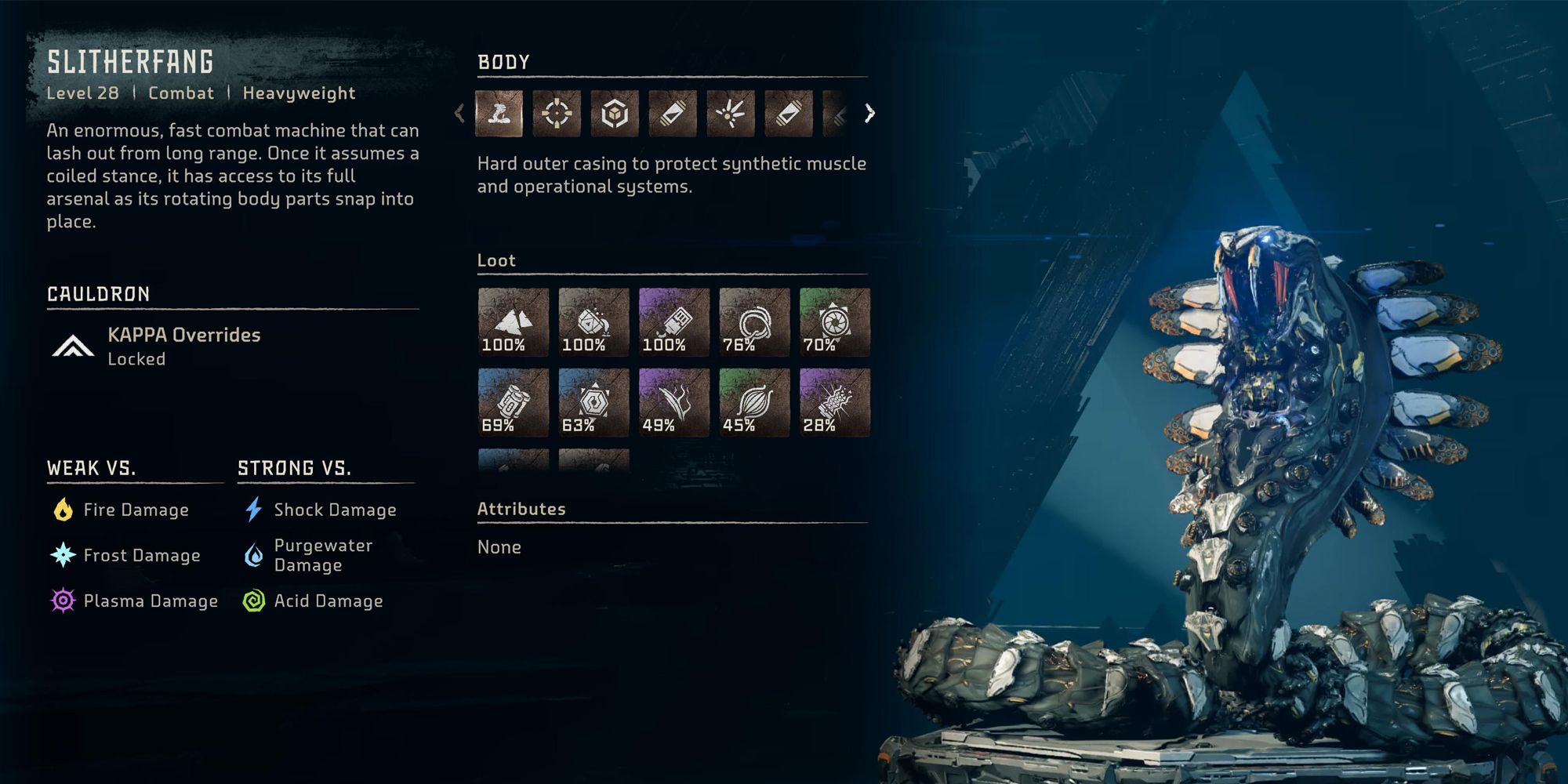 During the opening hours of the game, you'll meet the machine known as a Slitherfang. Good thing that Aloy manages to knock a structure onto the Slitherfang, so you don't have to deal with it, right? Well, all would be fine if the machine didn't then proceed to break out and attack you.

From the creepy entrance of the Slitherfang and how powerful it is shown to be, it makes quite the impact. Slitherfangs utilize lashing attacks and are vulnerable to fire, frost, and plasma damage – a perfect excuse to use a Boltblaster.