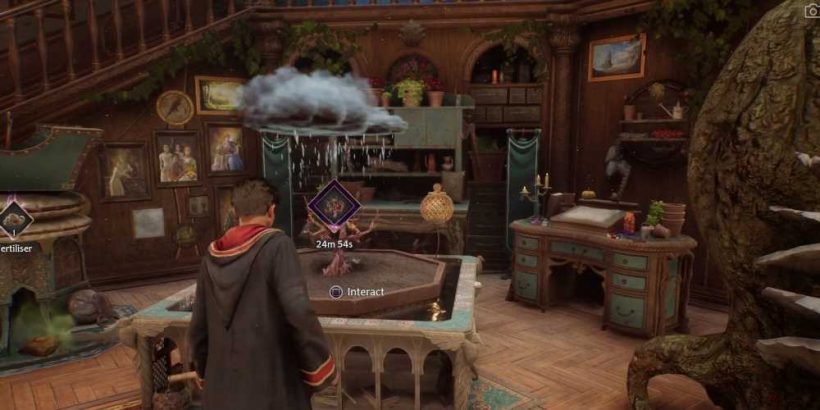 Warner Bros. gave us a first look at Hogwarts Legacy earlier today during PlayStation's latest State of Play showcase, detailing the game's story as well as elements such as combat mechanics and open-world activities.

It's not all good news though, as Hogwarts Legacy also looks like it will include mobile-game style timers which will force players to wait for upgrade materials and potion ingredients. As can be seen in the game's Room of Requirement area, the player in the trailer starts growing several materials for potions, each one shortly accompanied by a 25-minute-long timer for the plant to grow.

The presence of timers is slightly worrying, mainly because they seem to replicate the timers seen in popular mobile titles like Clash of Clans and Candy Crush. In these titles, players have the option of either waiting for these timers to run down, or to use premium currency to skip the wait and get on with playing the game.

This isn't an outright confirmation that Hogwarts Legacy is going to include microtransactions, it's not made clear in the State of Play whether you'll have an option to skip these timers. However, it's definitely a system that is ripe for exploitation if Warner Bros. feels up for it, especially considering the length of these timers. It's also worth pointing out that Hogwarts Legacy also seems to have a material called Moonstone which is used for some of the Room of Requirement's upgrades, and that the player character seemingly has an unlimited amount of it.

You may be thinking that Hogwarts Legacy couldn't possibly have microtransactions since it's a single-player game, but Warner Bros. does have a history of controversial monetization. Middle Earth: Shadow of War is another single-player title published by Warner Bros. that had a particularly egregious loot box system jammed into it, a system the publisher eventually removed.

Unfortunately, there's no way to tell these timers signal any kind of predatory monetization methods until Warner Bros. clarifies what's going on, but it's definitely something to watch out for if you're easily affected by these sorts of schemes.