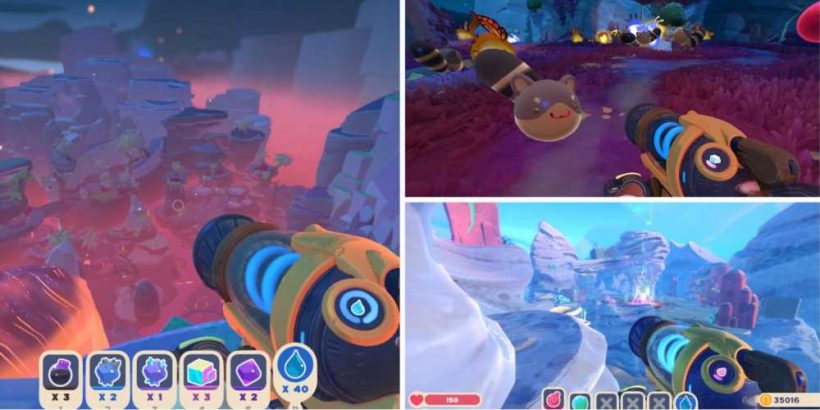 Slime Rancher 2 is the highly anticipated sequel game developed and published by Monomi Park where you get to collect cute slimes and sell their plorts for currency. Like its predecessor, you can purchase a number of different upgrades from within your base, but to do so, you have to track down the patterns and resources to unlock them.

One of the items you can acquire is the almighty jetpack, which is a critical piece of equipment. Gaining access to new areas or hard-to-reach places goes a long way in Slime Rancher 2, so purchasing it early on is beneficial. But just in case you still need crucial research pods or resources, here are some hidden places you might have missed. 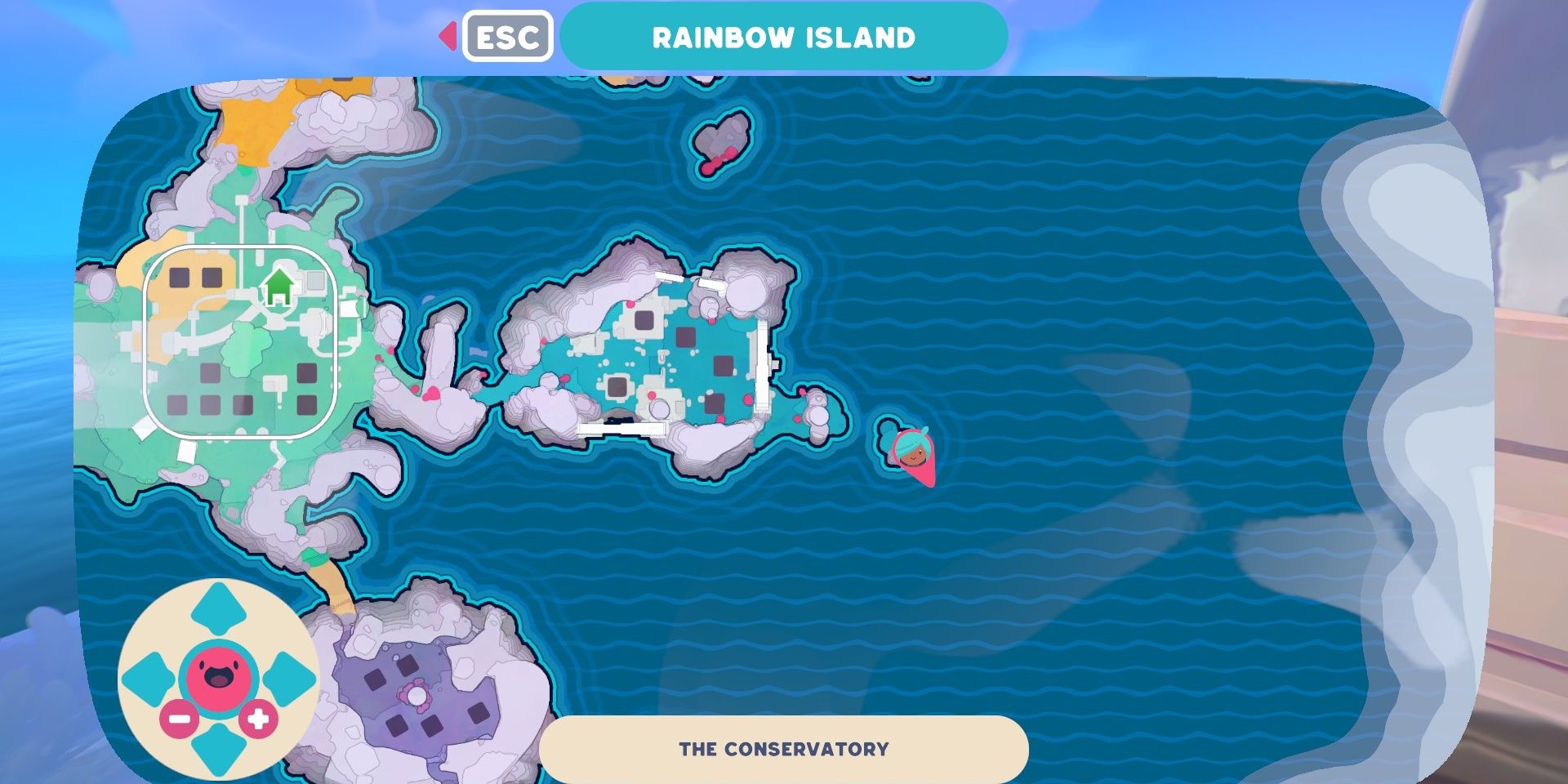 When in the main base on Rainbow Island, turn away from your home to face east. Head into the Conservatory area once it’s been unlocked to reach a sneaky message.

This message is found hiding at the very back of the island, but not after jumping through some rocks shaped as archways. After getting through the archways, use your jetpack to get over to the message bee which is clearly visible at this point. 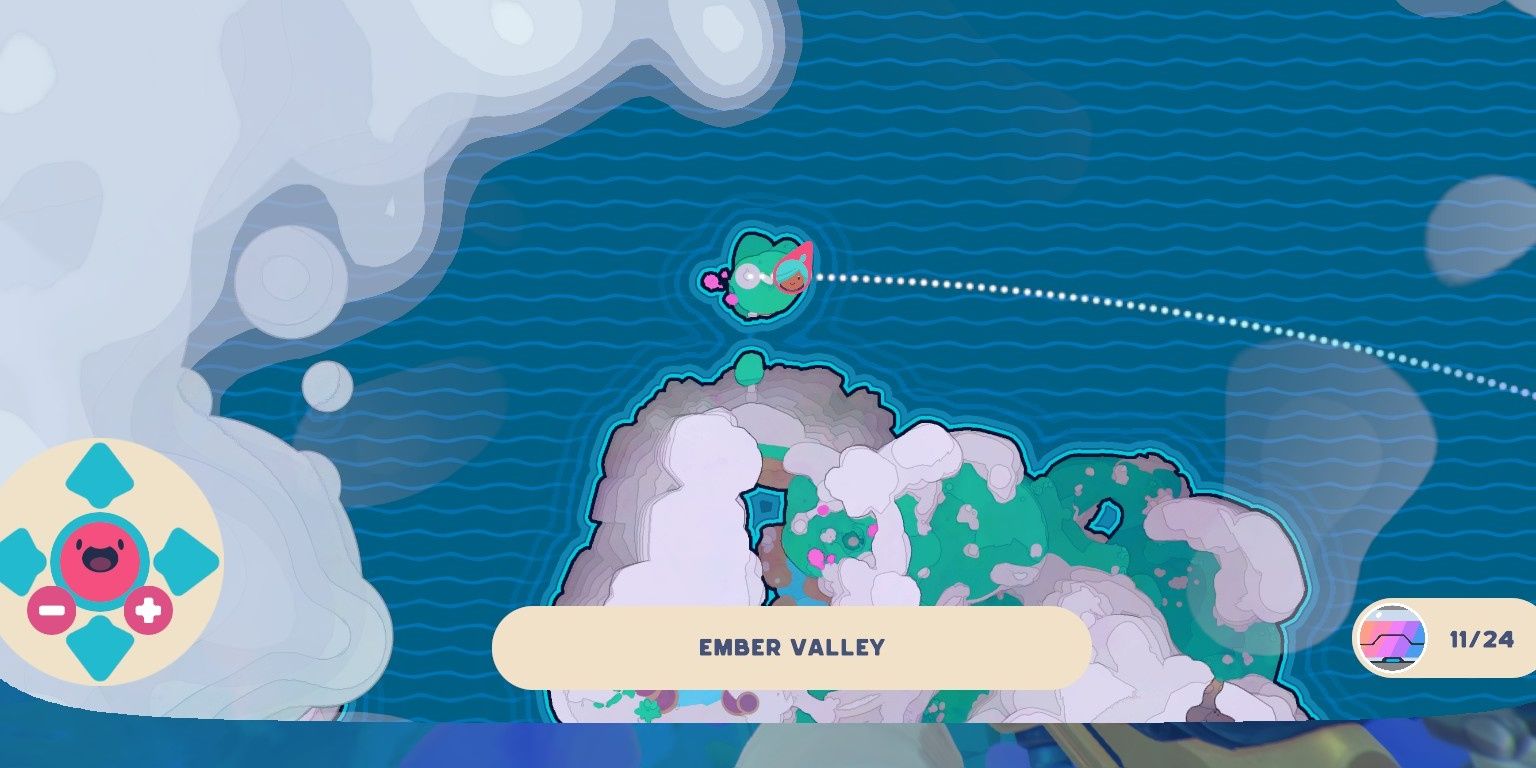 To get to Ember Valley there is a teleporter on a northern peak of the Rainbow Fields that is accessed by a small patch of desert land. Once this teleport is unlocked, you can take it to a little island at the northernmost point of Ember Valley. After you go through it, look to the left to the edge of the cliff, and you will find a message bee.

On that same island lies some primordy oil that is right next to a cache hidden under some stone slabs. The only trick is that both items are below the teleport point, so it isn’t obvious unless you jetpack over to the platform across from the teleporter. Don’t worry though, there are water spouts that will shoot you back up to the top after you’re done collecting the resources.

12/14 If You Need Some Ringtail Slimes, Just Look Around 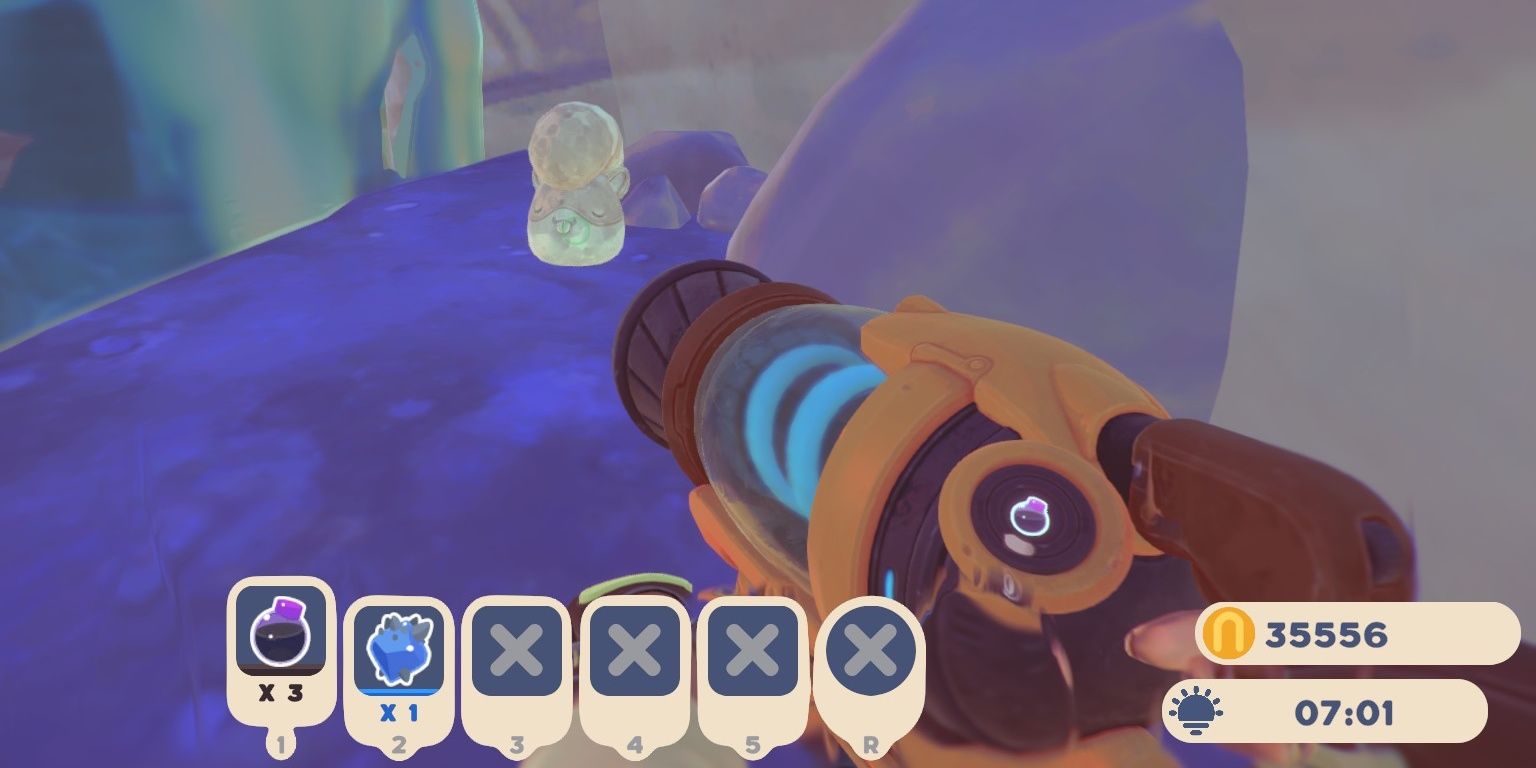 While on Ember Island, keep a sharp eye out for ringtail slimes that can be found hidden as stone statues. You might have seen them, but not have known that they could be collected. These slimes turn to stone when sunlight directly hits them.

If you’re looking for one that hasn’t turned to stone, check out their hiding spot behind a waterfall close to where some crystal and bat slimes are. More specifically, the waterfall in question is found directly across from a hole in the ground on the northern section of the continent. 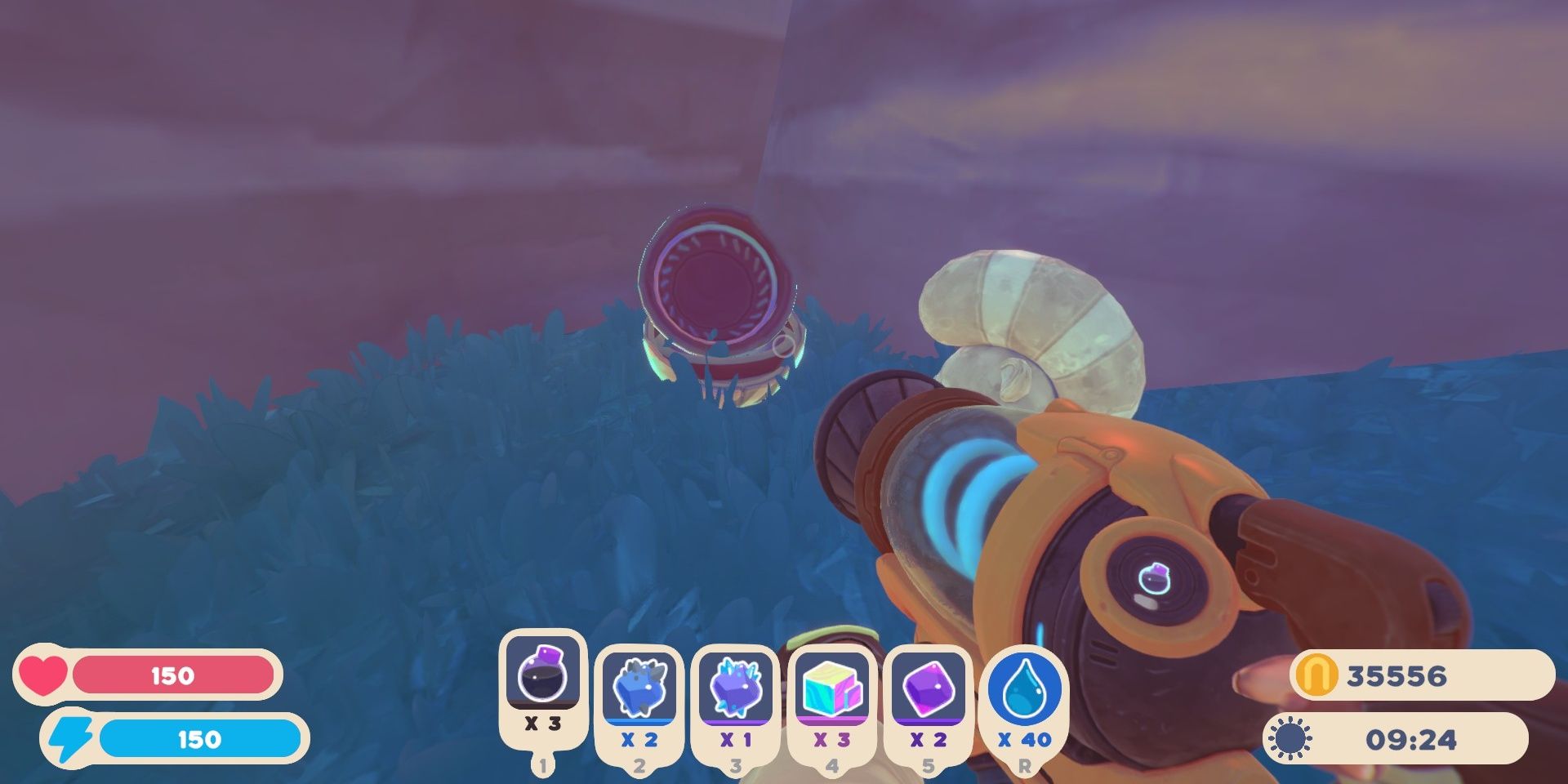 Scattered throughout the world are caves that hold different slimes, research caches, and resources. Occasionally, these caves detract from secrets that lie a short distance away. In Ember Valley, there is a cave across a short jump at the bottom of a ramp. The map has this location on the southern point in the top section of the continent.

More accurately, the hidden cave is found directly south of the small island with the teleporter. Not only will you get research patterns here, but you’ll also find ringtail slimes!

10/14 Waterfalls Hold The Key To Riches In Ember Valley 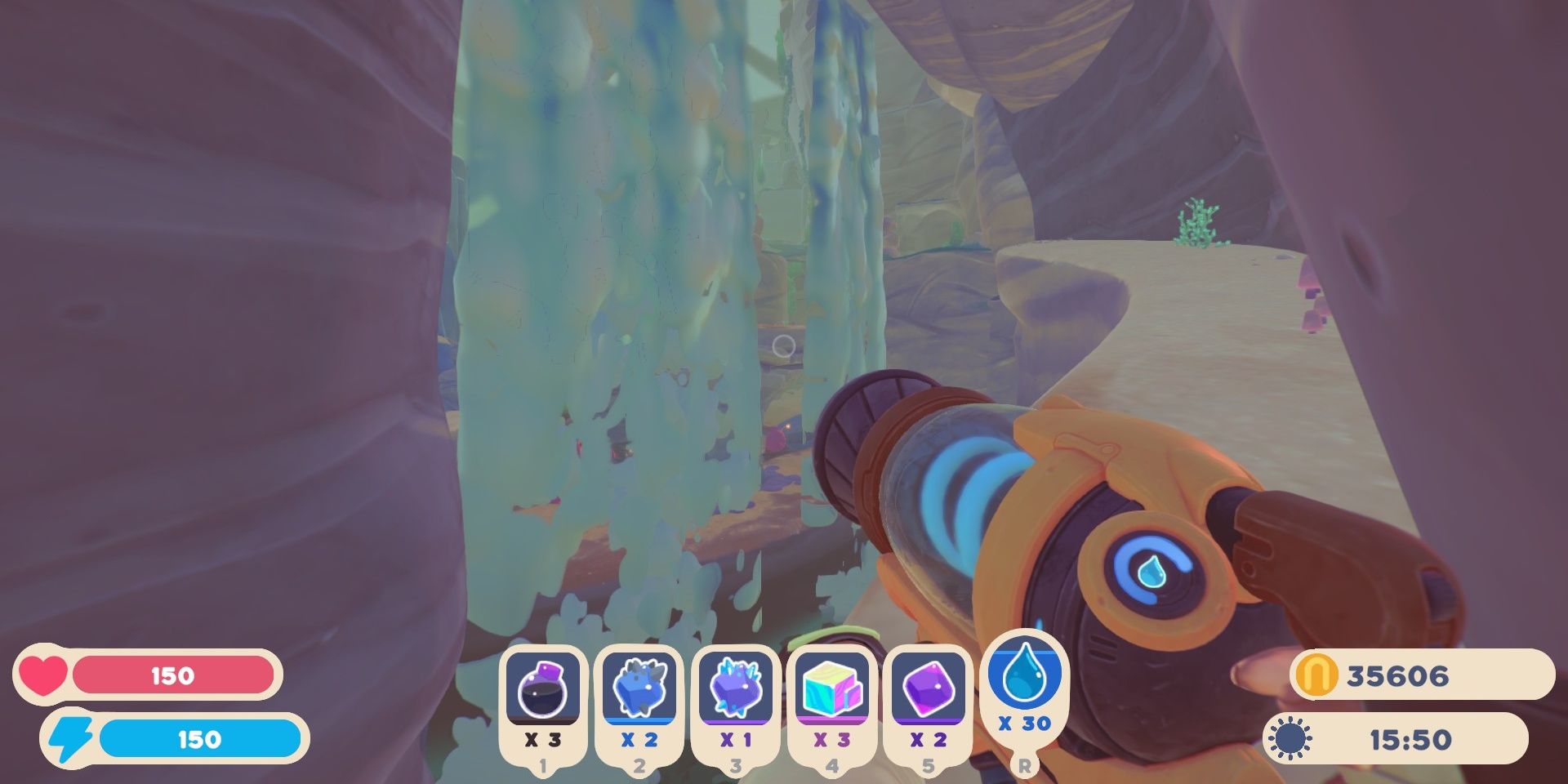 On the southern end of Ember Valley in the center of the continent are a couple of waterfalls. Check behind them to find a cave that contains not one, but two blue diamonds and a waterspout.

If you take the waterspout upwards, it opens up to a hidden pond with a couple of puddle slimes, a ringtail slime, a couple of primordy oils, and a research pod. This area is also a great place to take amazing screenshots.

9/14 Find A Research Pod Hidden Behind A Rock 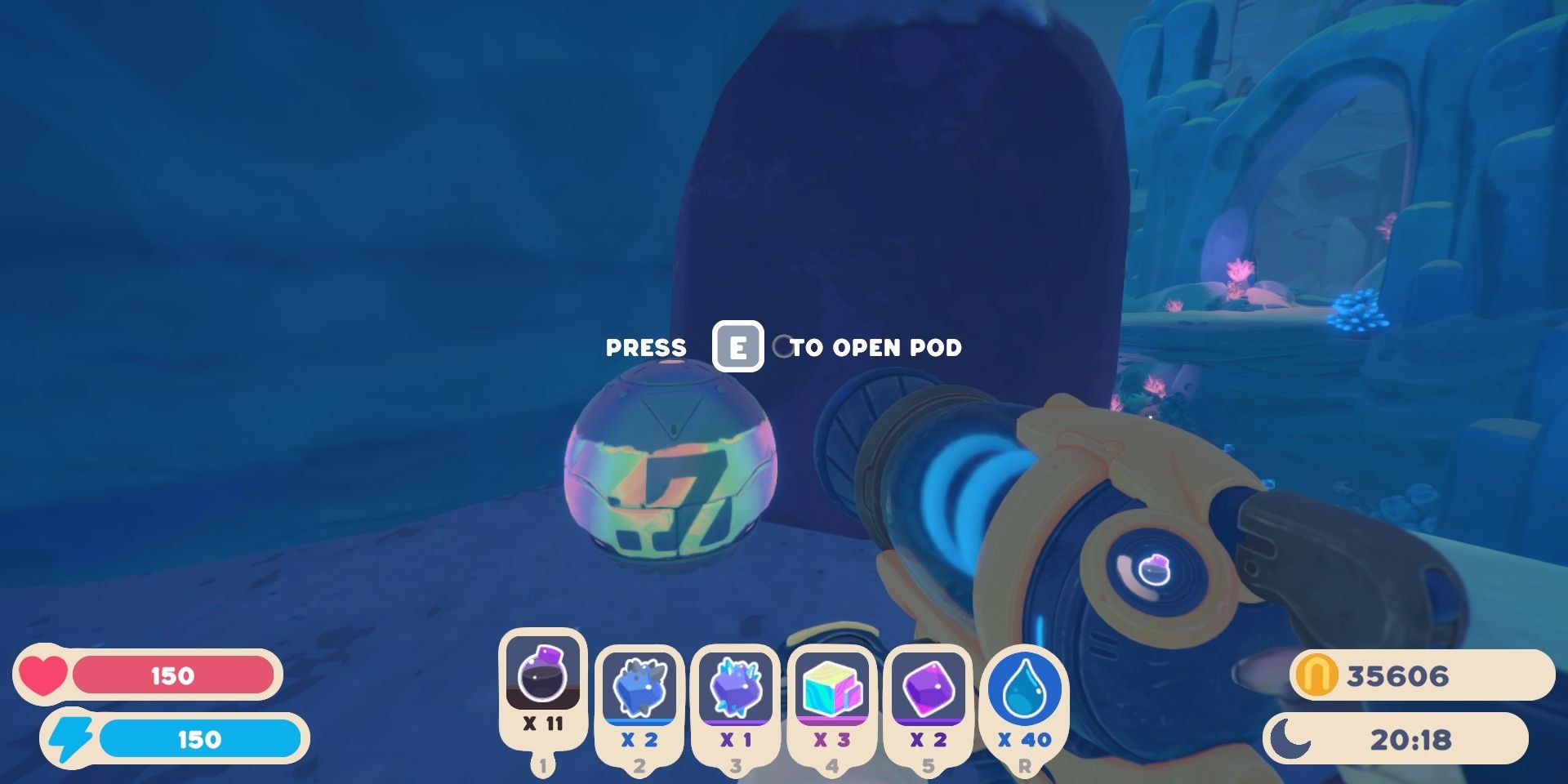 From the pond mentioned in the previous entry, visually scan the area to see a research cache hiding behind a rock.

To get to it, besides jumping off the ledge you see it from, there is a convenient waterspout on the ground that catapults you up to the top of the rock. Once on it, drop off the back of it to the ledge below to activate the research pod. 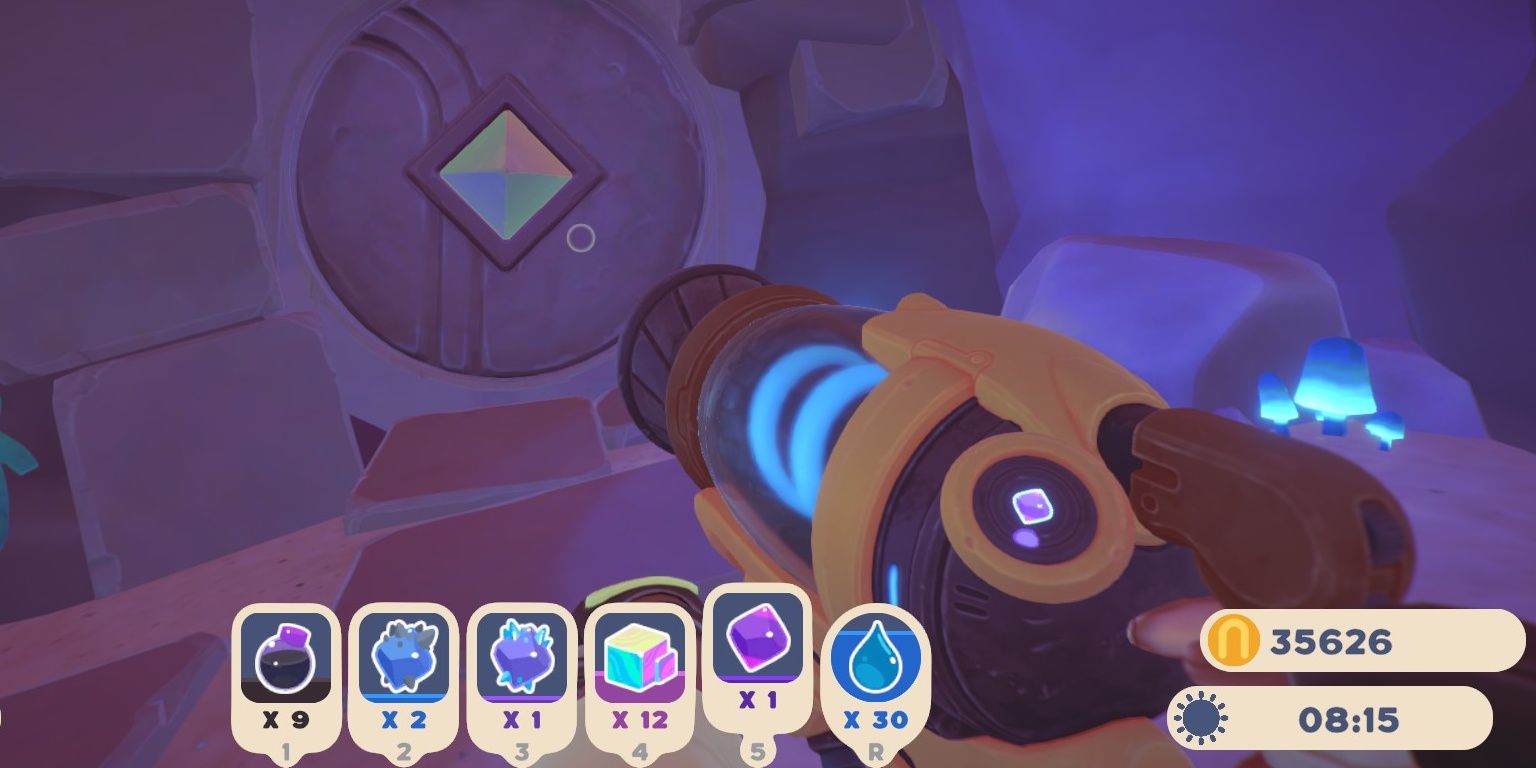 Inside a cave, there is a door that is opened by a slime statue. You have to take the water spout up to see one of the statues needed to open this door.

There are three boom plort statues to satisfy so that the door opens. Once that is done, you’ll find some resources, some waterspouts, and a research pod. There is also an access point to the rock gordo.

7/14 Slime Doors Are Found In A Variety Of Places 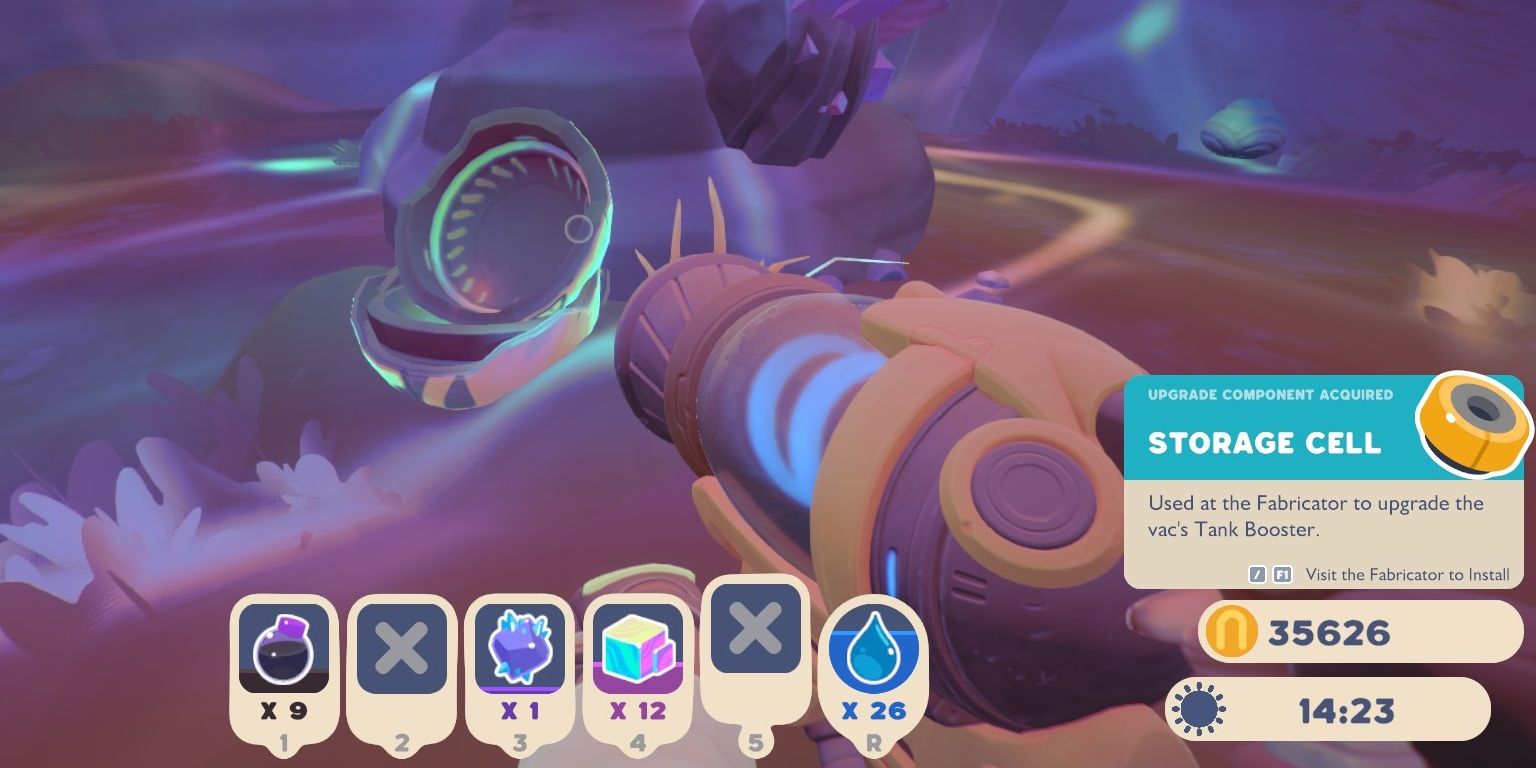 After you take the furthest teleport from the farm to Ember Valley, turn around and drop onto the ledge below. If you follow the path to the end, there is a slime door that needs a bat plort.

Once inside this pretty-looking cave, some radiant ore and a research pod are waiting to be gathered. 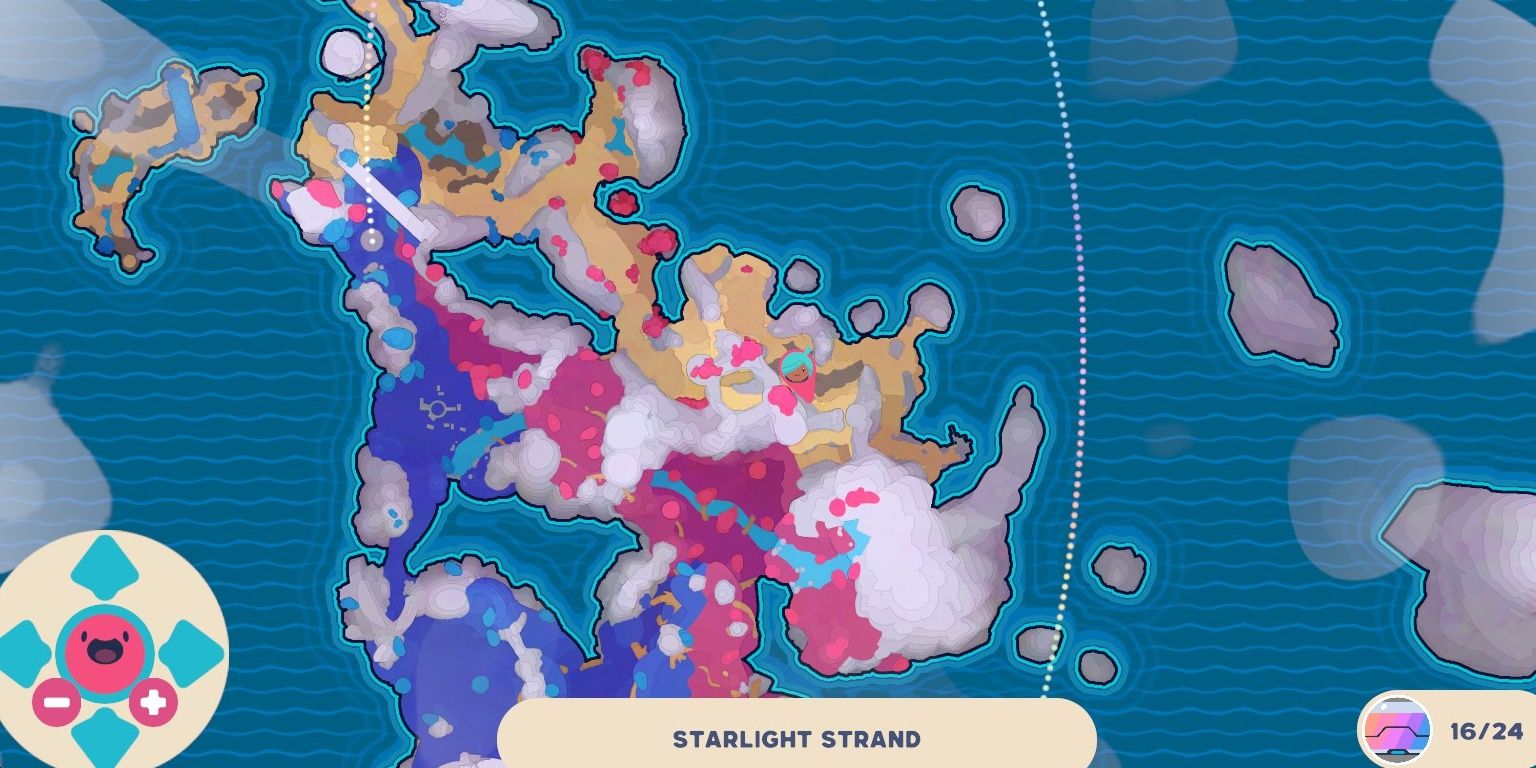 When you enter the slime doors that have two entrances in the Starlight Strand, there is a ledge you can drop onto where there is a cleverly hidden away Research Pod.

Just make sure that you get the jetpack upgrade before grabbing this one because the way you get in there is also the only way to get back out!

5/14 Go Behind The Teleporter To Find A Research Node 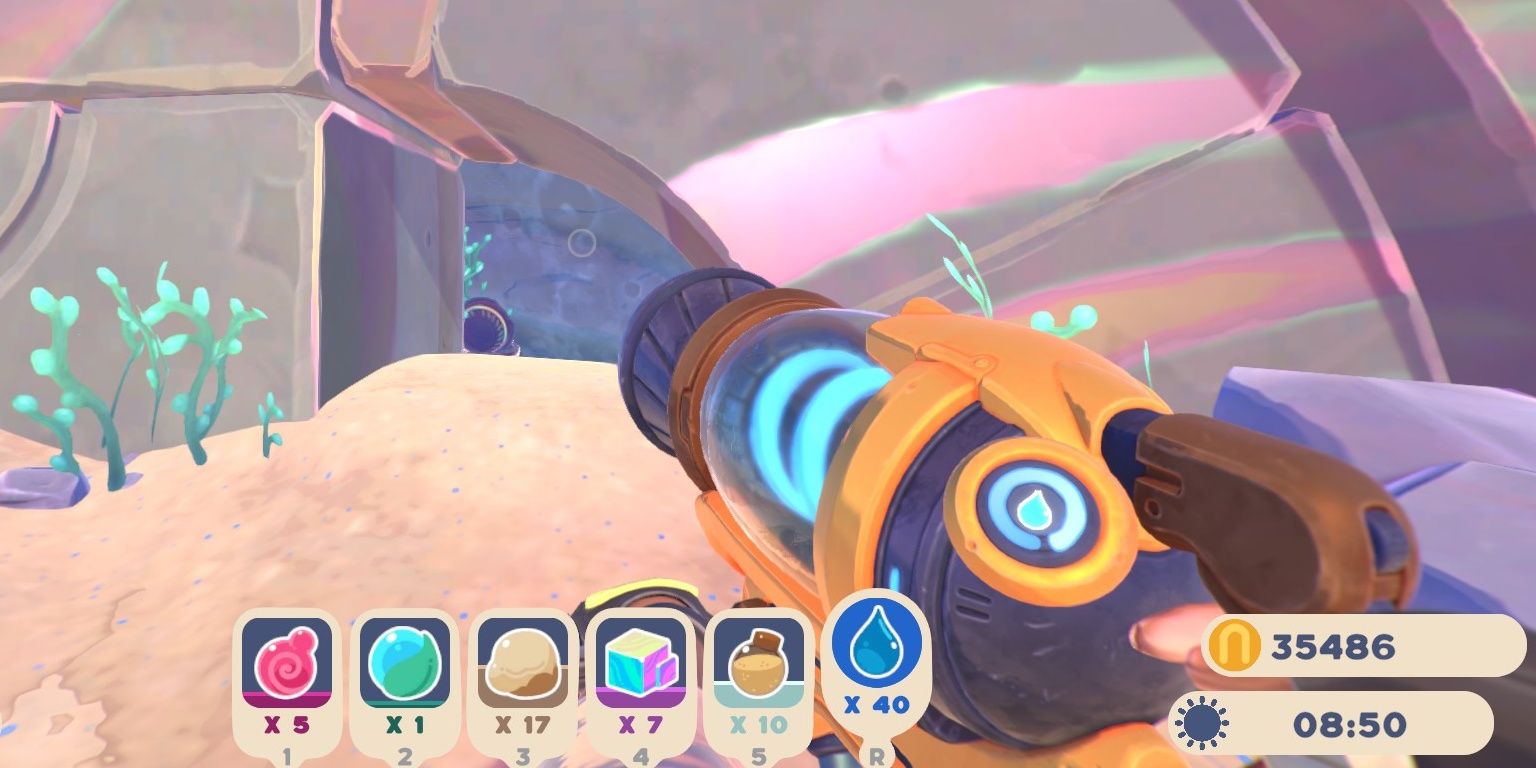 In the Starlight Strand, there is a small desert area located behind one of the teleporters. When looking south, you’ll see a ramp leading upwards. On the left-hand side and down towards the white mountain is a ledge.

Instead of going up towards the interesting-looking tree, hop over the side to land on a lower path. If you follow that to the end, there is a small archway that hides a well-hidden research pod for you to grab.

4/14 Reach An Island In The Starlight Strand For Riches 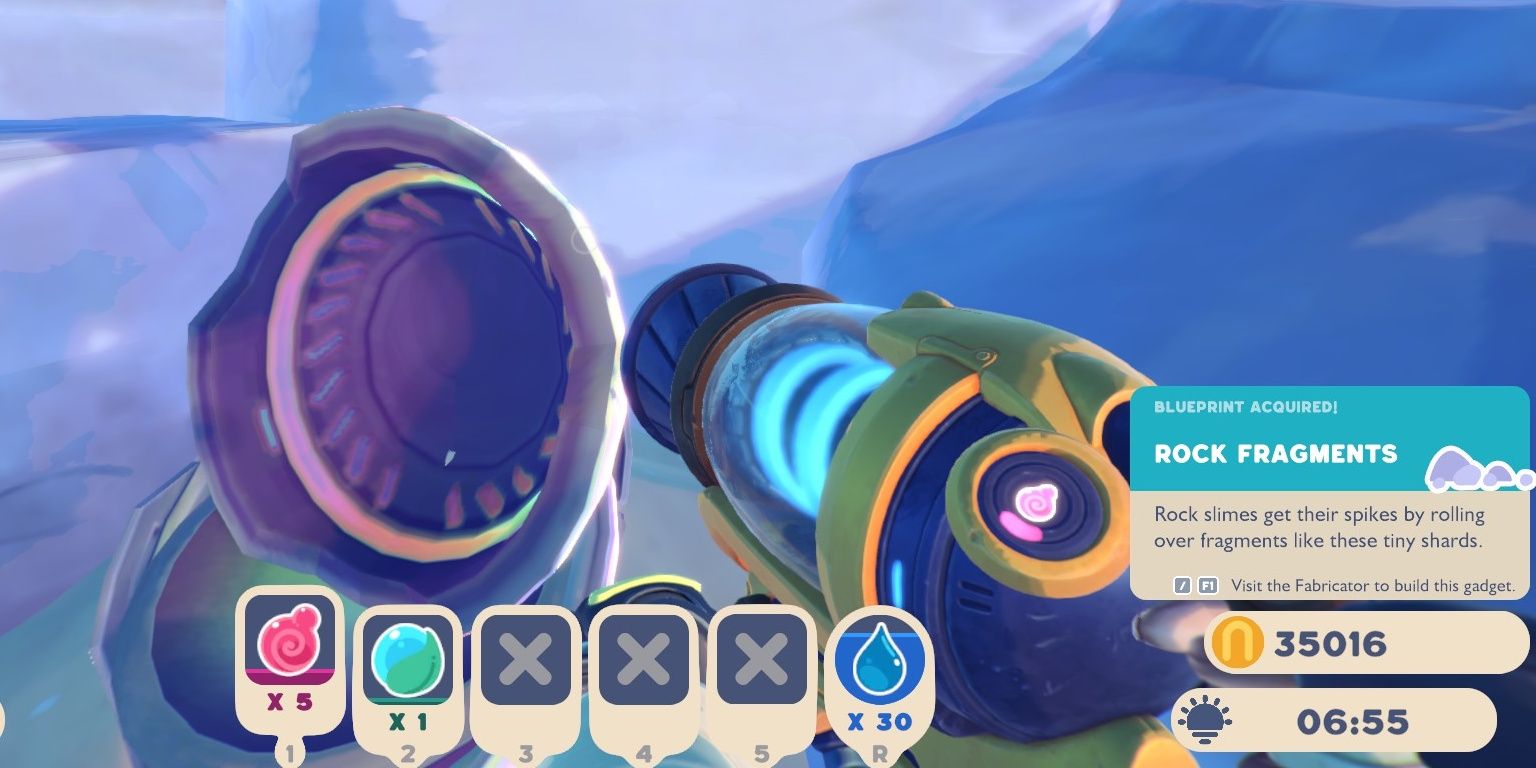 Behind the portal, there is a nice little beach area where you can see an island with resources. If you have the jetpack, you can get across to the island easily for some of that tasty loot.

Not only will you find a research pod, but there are plenty of Angler and Phosphorous slimes too. 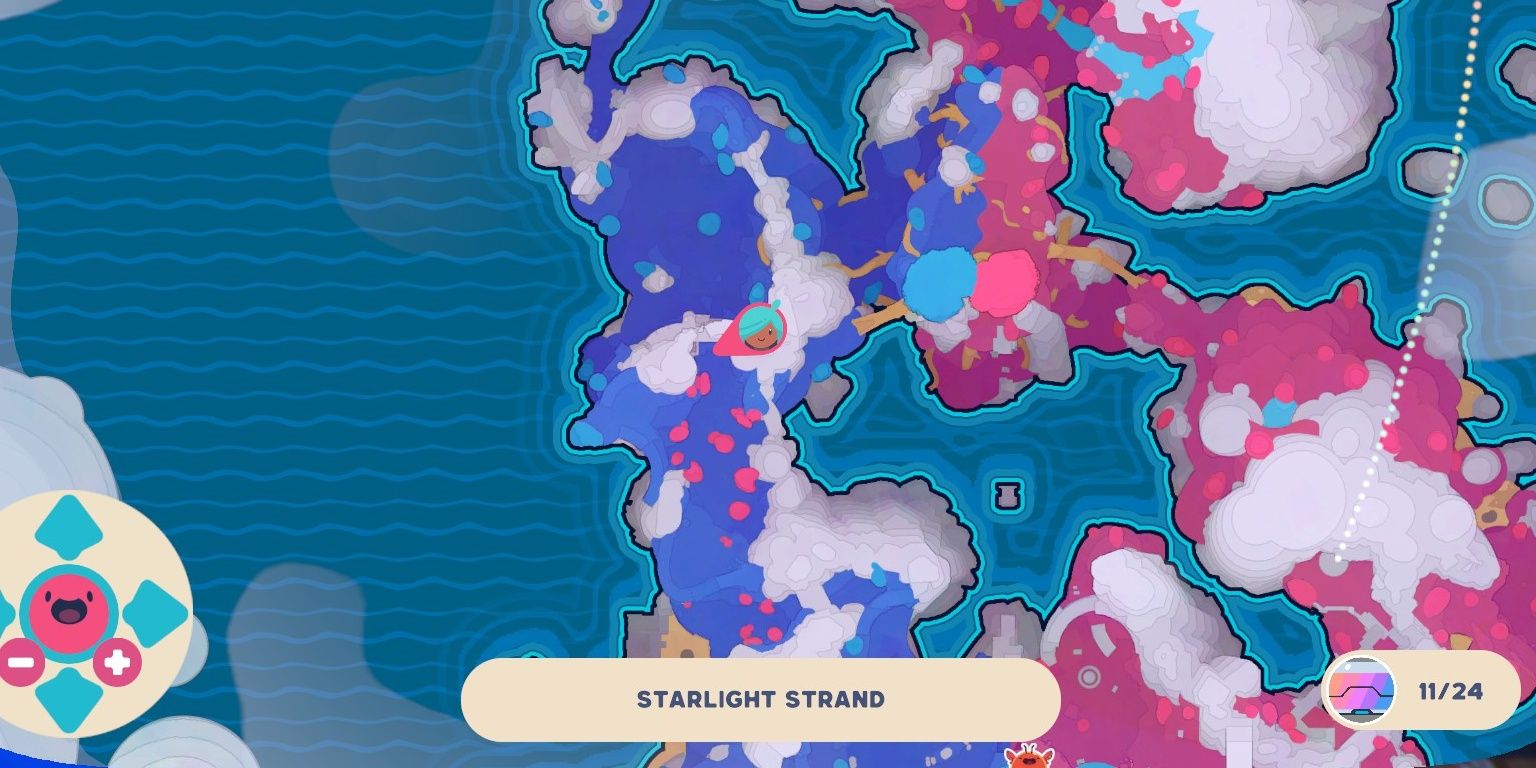 In the purple section of the Starlight Strand, there is a large wall with a round open pathway. You might have noticed that below that opening is a locked slime door. Unlike many of the other slime doors in the game, this one requires three hunter slime plorts.

Two of them are fairly obvious, but the third one is easily missed as it can be found on a ledge all the way to the right-hand side of the wall. Once you satisfy the statues, there will be a breakable cache and a research pod to collect.

2/14 The Trees Are The Keys To A Concealed Area 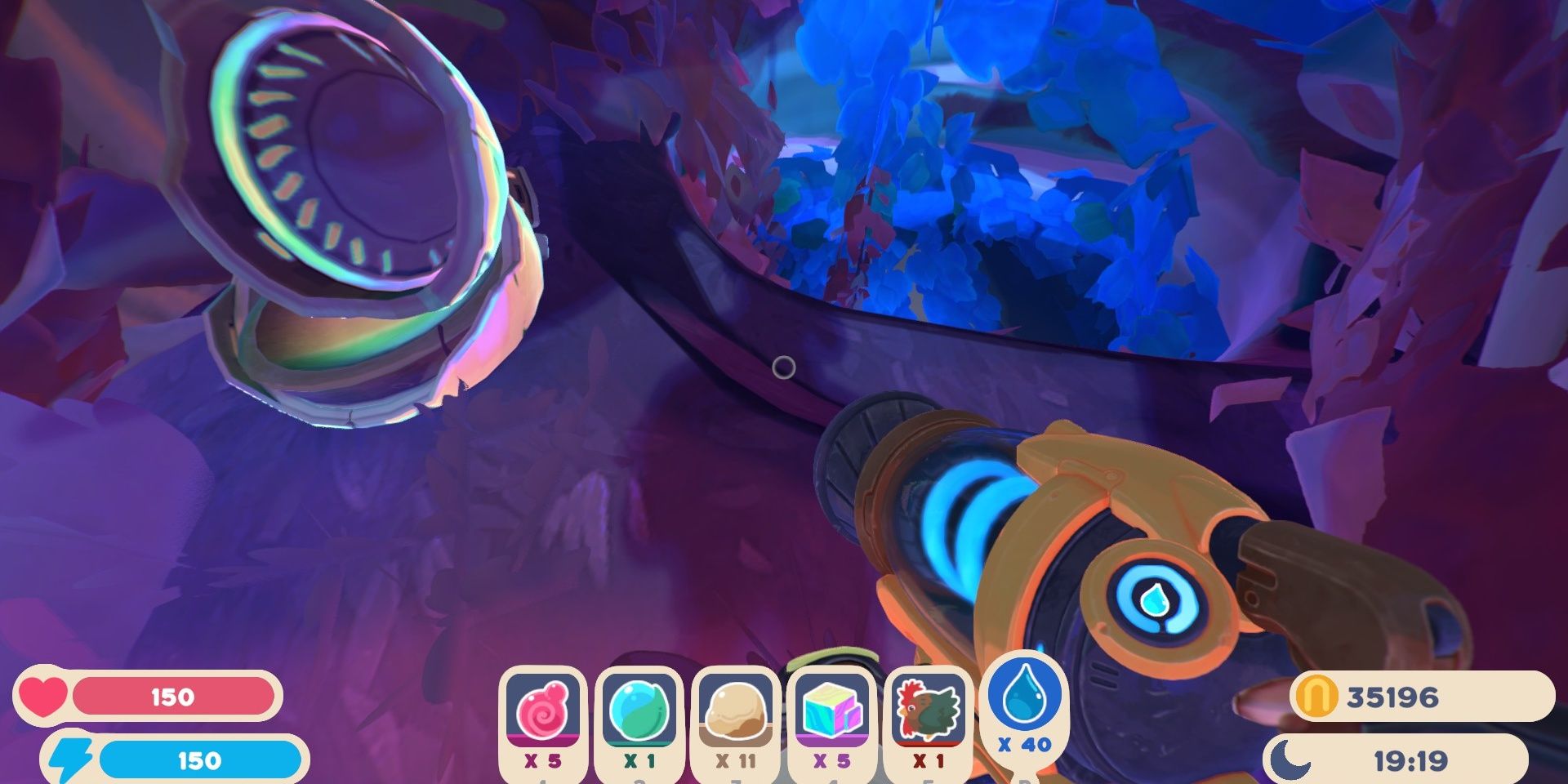 On the map is a neat intersection of two different colours of trees within the Starlight Strand. This isn’t a mistake, it’s actually an obvious hint to a hidden location below.

You might find the blatant research pod that sits in the crux of the trees, but perhaps not the cleverly concealed hole that reveals more resources below.

1/14 Catch The Angler Slime By Walking Behind A Cliff 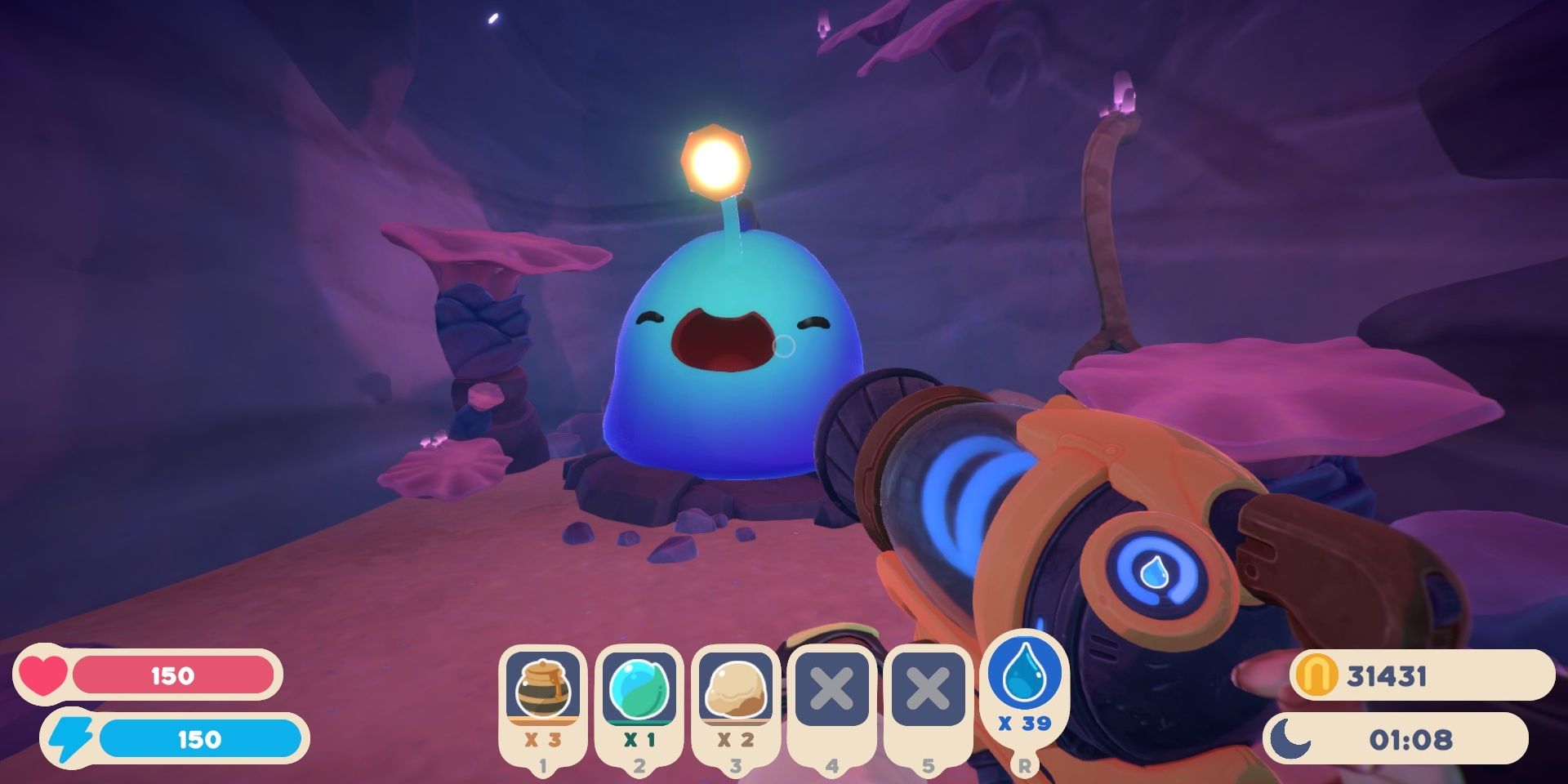 There is a cliff in the Starlight Strand that hides a hole containing an Angler gordo. If you fall into the cave below where the gordo awaits his tribute, you will find that there are Sea Hens.

Among other resources found in this cave is a node or two of radiant ore. Plus, there is a research pod containing a handy blueprint.