Season 7 is on the horizon, but before we get excited about whatever the new Legend is supposed to be, Respawn Entertainment is making sure that new players can get right into the game and spend their money on exclusive new content.

Yes, Apex Legends Champion Edition is set to arrive with Season 7 and it’s probably the best deal this battle royale game has ever offered. With Champion Edition, you get a $100 value for just $39.99. This includes exclusive cosmetics you can’t get anywhere else, 1,000 Apex Coins, and all previously released and one upcoming Legend.

Let’s start with those Legends. Apex players from the start have had to pay to unlock new Legends as they became available, but in Champion Edition you’ll get all the pay-to-play Legends at once. This includes Caustic, Mirage, Octane, Wattson, Crypto, Revenant, Loba, Rampart, and the Season 7 Legend who hasn’t even been officially announced yet (although we’re pretty sure we know who she is–more on that later). 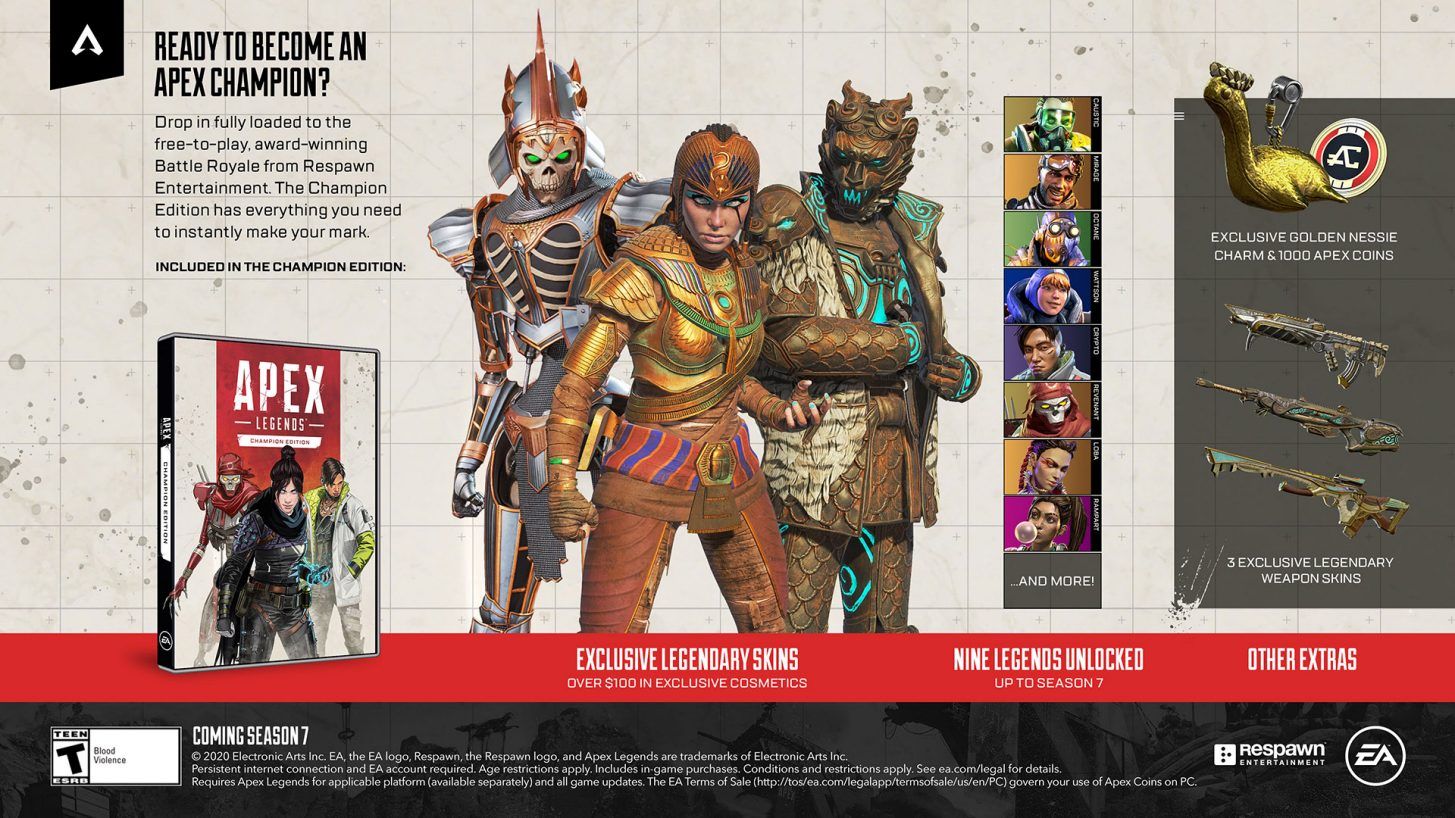 Next up, lots of cosmetics. Of the seven skins you get, three are for characters, three are for guns, and one is a lovely gun charm. The “Risen Queen” Wraith skin has a very ancient Egypt aesthetic, while the “Forged Knight” Revenant skin has a very Warhammer 40K feel. Crypto’s “Hallowed Spirit” skin brings a Native American/Aztec nature spirit vibe that seems very appropriate for the season.

The Triple Take, Flatline, and Sentinel also get skins that are themed to the character skins above, and the “Emperor Nessy XIV” gun charm is a very clear Loch Ness monster reference. Which, now that I think of it, is also a reference to the Season 7 Legend.

You can spend those 1,000 Apex Coins on whatever you like, including new cosmetics or the Season 7 Battle Pass. There’s no date for when Season 7 drops, but when it does, you can get Champion Edition for $39.99.

The Champion Edition trailer revealed that the Season 7 Legend will be a woman, and there was a mysterious challenge available to players yesterday that would reveal just who she is. All the clues and her Scottish lilt point to Horizon joining the Apex Legends roster for Season 7. And yes, she comes with the Champion Edition too.