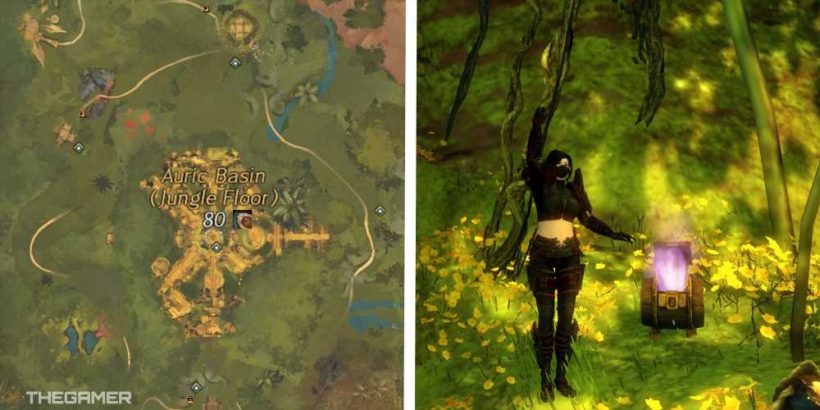 Guild Wars 2: Heart of Thorns introduced us to strongboxes. These little boxes contain a variety of loot, and will reward you with one mastery point the first time that you open one. Unlike regular mastery points though, strongboxes are not marked on the map.

In this guide, we are going to go over how to find every strongbox within Auric Basin. There are five total strongboxes in Auric Basin, requiring you to use your gliding mastery, as well as other mastery-related objects. If you already have a mount, these boxes will be easier to reach, but having a mount is not required because each of these strongboxes can be reached on foot. Now, let's take a look a the first strongbox location. 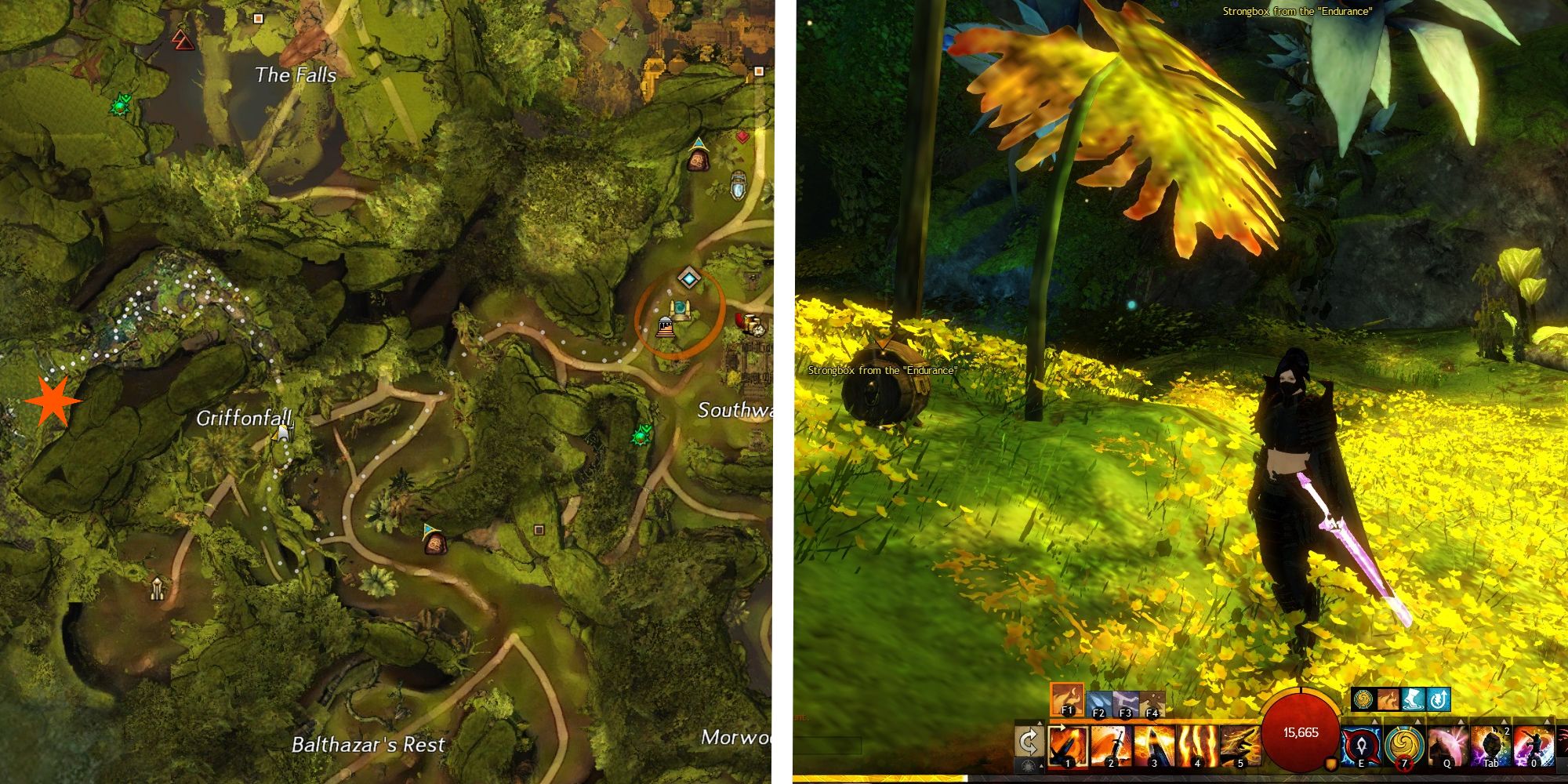 To get to the Endurance strongbox, start from the Southwatch Waypoint and follow the road west. Along this path, you will see several enemies, including a group of pocket raptors. If you have a mount, it's best to jump (or fly) past them; pocket raptors can be quite dangerous in large groups. Eventually, you will make it to a small camp set up at the base of a large branch.

Take a slight right up the slope, and you should see little platforms coming out of the branch. Jump up these platforms, and you will be right next to A Fungus Among Us adventure.

Once you get past the adventure, there will be no enemies standing in your way.

Keep following the path until you come to a cave area with a waterfall at the end. From here, you will take the path that leads up, which is near the mouth of the cave. Jump between the ledges until you come through the upper portion of the waterfall that can be jumped through. Proceed through and the strongbox will be waiting for you in a clearing. 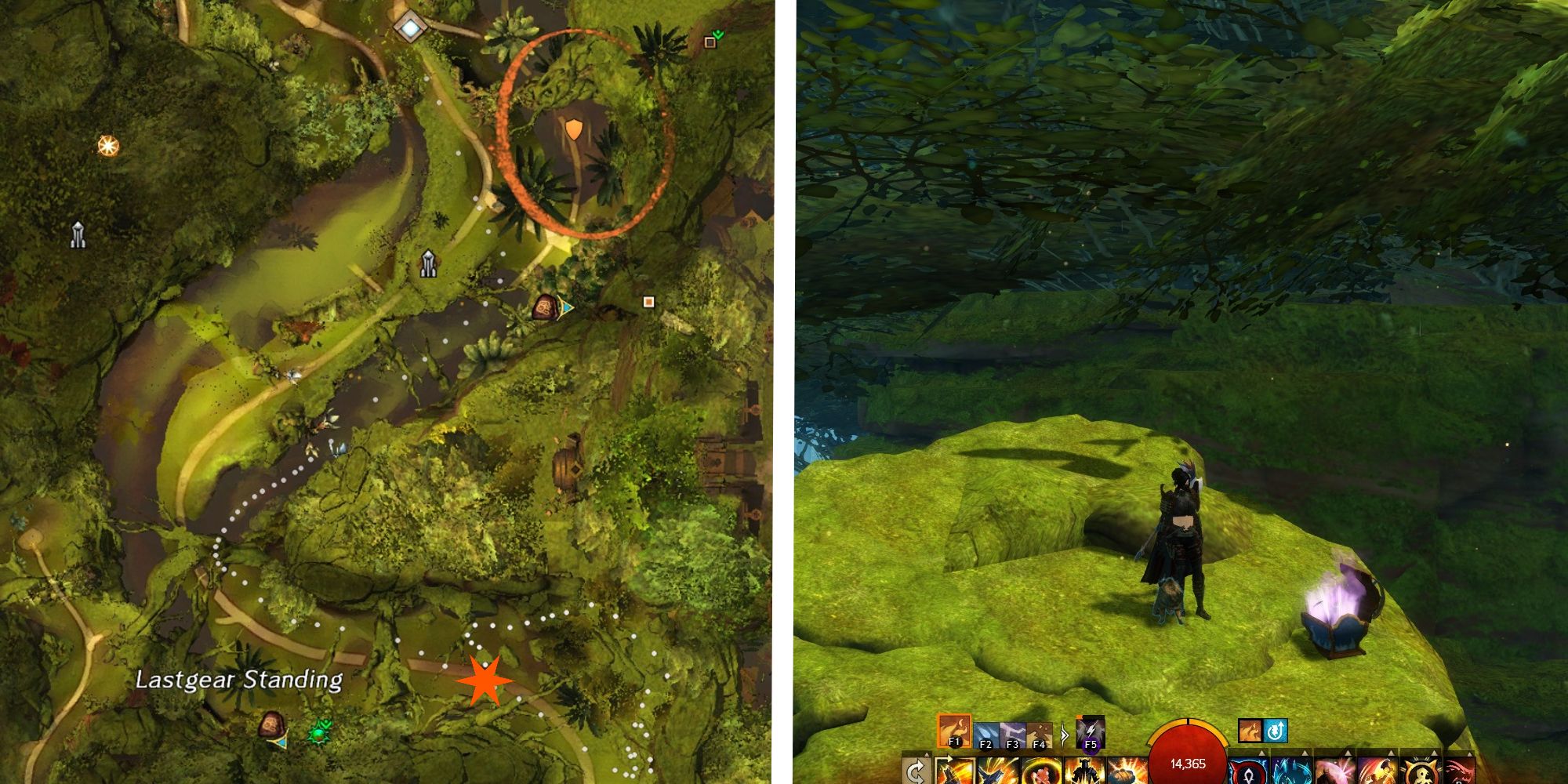 Starting from the Westwatch Waypoint, head south along the path and take the curve east. On the map above, you can see the route you will take. Along this path you will see a bouncing mushroom; jump on this and you will come to another bouncing mushroom. Bounce until you reach the top, and then continue moving northwest.

There are several strong Veteran Quetzal Scouts along this ledge; you can outrun them or defeat them, but they will not be able to follow you to the strongbox location. These enemies are pretty strong, so it's okay to dash by them.

Looking to your left, you will see branches extending over the path below, with one branch holding the Slice of Sky strongbox. From the ledge, you can glide over to the strongbox and open it. 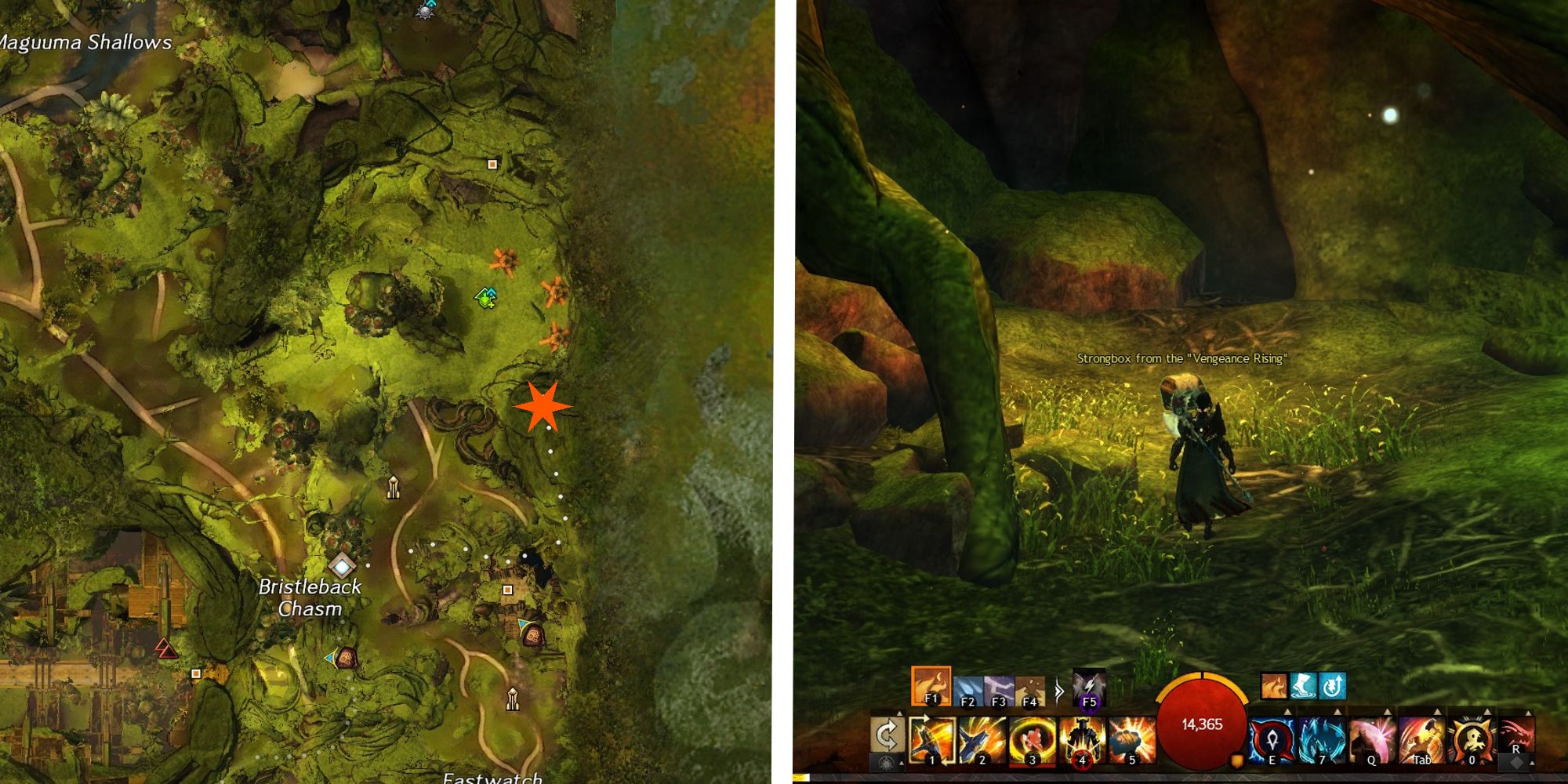 To get the Vengeance Rising strongbox, head to the Eastwatch Waypoint and take the path leading to the east until you come to a shallow pool of water that's filled with enemies.

On the north edge of this pool, you will see a small cave opening; enter and you will find the strongbox at the very end.

When you enter the cave, a Veteran Mordrem Vinetooth will spawn, but you can open the box quickly and dash out without having to fight it. 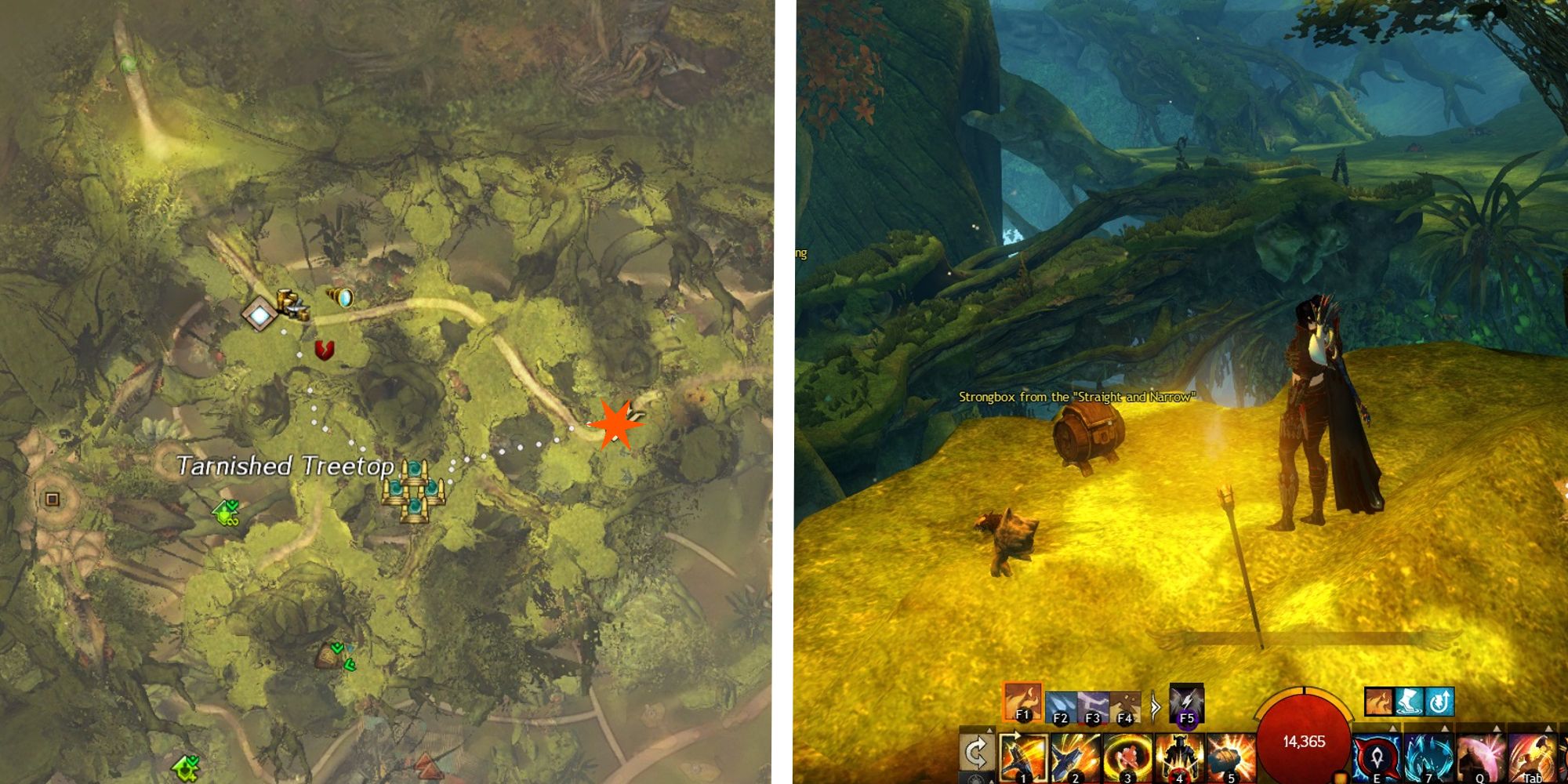 The Straight and Narrow strongbox is relatively easy to find. Head to the Wanderer's Waypoint, and then look for the bouncing mushroom to the south of where you are.

This mushroom will take you to an area filled with Exalted teleporters. Face the east from here, and you will see the strongbox glowing in the distance on a branch. In the map portion of the image above, you can see the direction that you should be facing from the Exalted teleporters. Now, you just need to glide over and open the box. 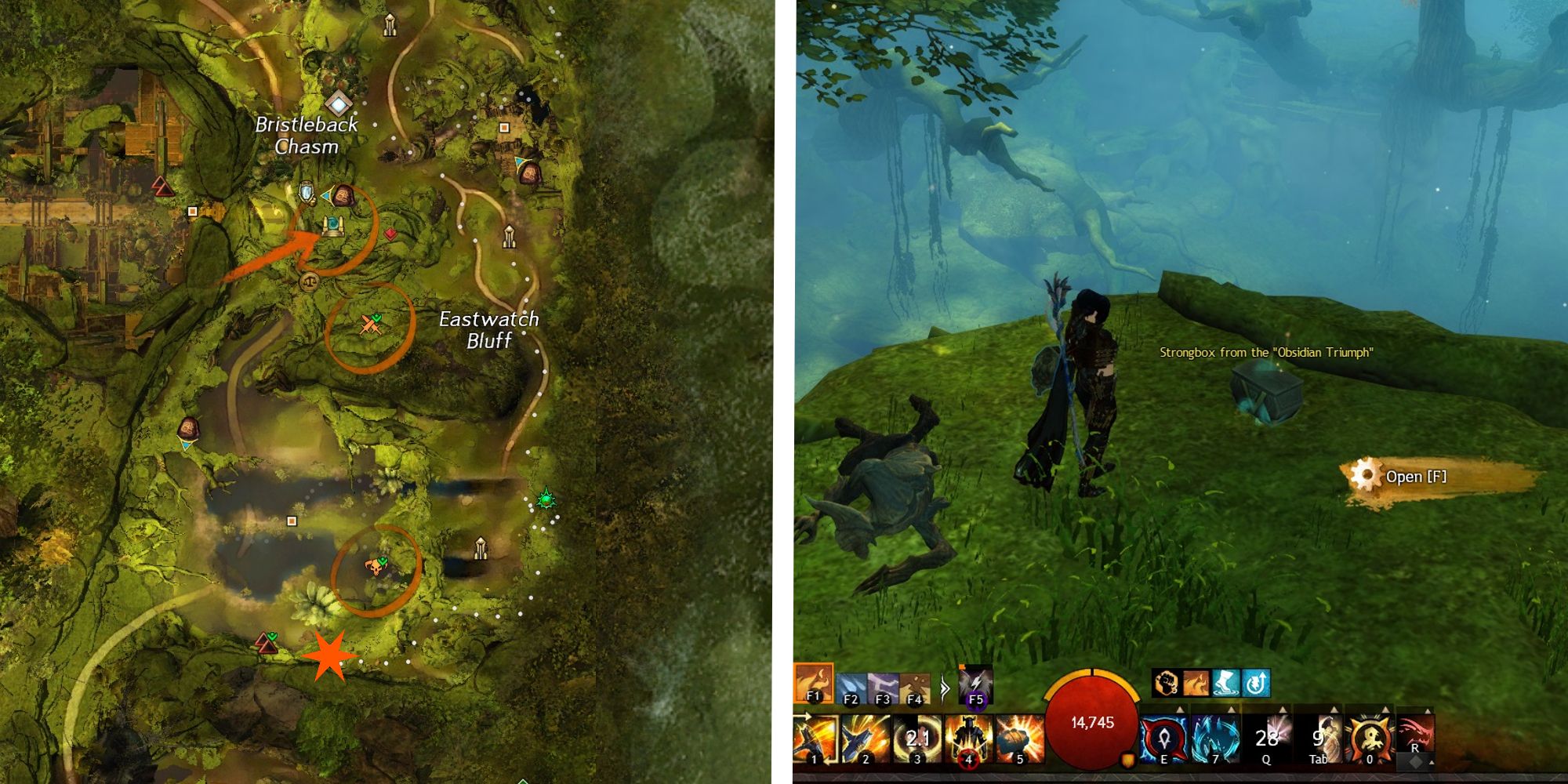 To find the final strongbox in Auric Basin, head to the Eastwatch Waypoint once more. From the waypoint, take the path to the southeast that leads towards Eastwatch Bluff and the pylons.

When you make it to the second pylon at the bottom of the area, you will see a bouncing mushroom leading to a ledge above. Take this mushroom and follow the ledge around the curve.

The strongbox will be at the end of the ledge, overlooking the nearby vista. There are a few Mordrem enemies, but they are fairly weak, and you can take them out quickly.

With that, you have found every strongbox in Auric Basin! You can find strongboxes within the four areas of Heart of Thorns, so be sure to head to them and continue your search. Remember, the first time you open a strongbox, you will be rewarded with one mastery point, making them very worthwhile. Strongboxes can be opened once a day, so if you open one that you have previously been to, you will still get a variety of loot.