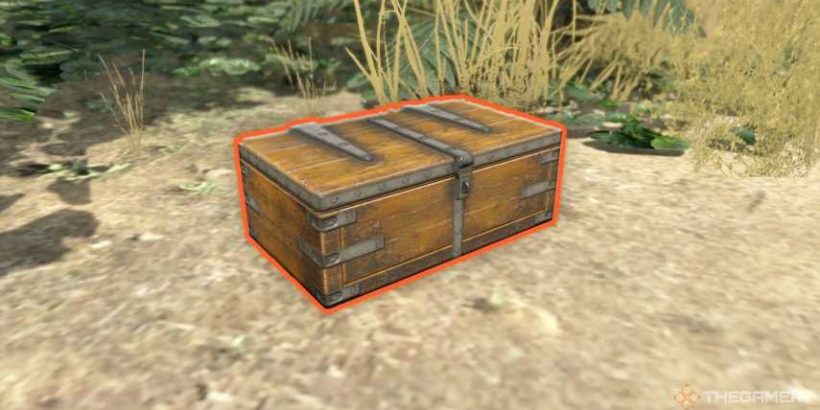 GTA 5 has been around for years; this game is so good it’s one of the few that has seen three generations of consoles come and go. While there’s no doubt Rockstar did a fantastic job with this installment in the franchise, part of what keeps GTA 5 alive is its online multiplayer mode, Grand Theft Auto Online.

GTA Online offers new places to explore, a multitude of game modes, mission-giving bosses, many activities from GTA V, etc. As you can see, there’s a lot to do, and the devs keep updating the game every now and then. For example, when Red Dead Redemption II was about to release, they added The Doomsday Heist update, which included a Treasure Hunt mission that served as a teaser for the upcoming game. Here’s everything you need to know to complete it.

How To The Unlock “Treasure Hunt” In GTA Online 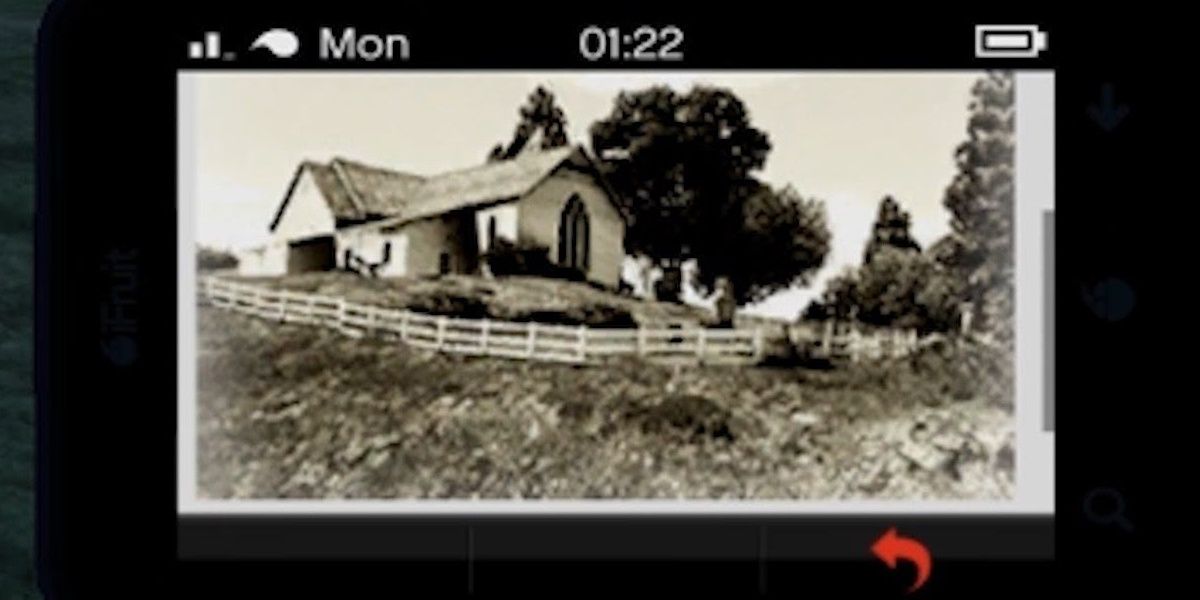 This mission can only be done once, and you’ll know when it’s beginning since you’ll receive an email from [email protected] (get it? Like the Van Der Linde gang from RDR2). Said email contains a black and white photo of a specific area in the game that you’ll have to search for clues on where the treasure is. After opening the email and checking the pic, the side mission will start.

You should know that if, for any reason, you quit the game before completing “Treasure Hunt,” you’ll have to start from the beginning. This really sucks since a new location will be given to you, making all your previous progress meaningless.

What You’ll Have To Do During Treasure Hunt

You’ll be able to complete this side mission in no time. After all, it is not the most challenging mission in GTA Online. Still, there are a few steps you’ll have to do first before claiming this mysterious treasure.

How To Start The Treasure Hunt Quest In GTA Online 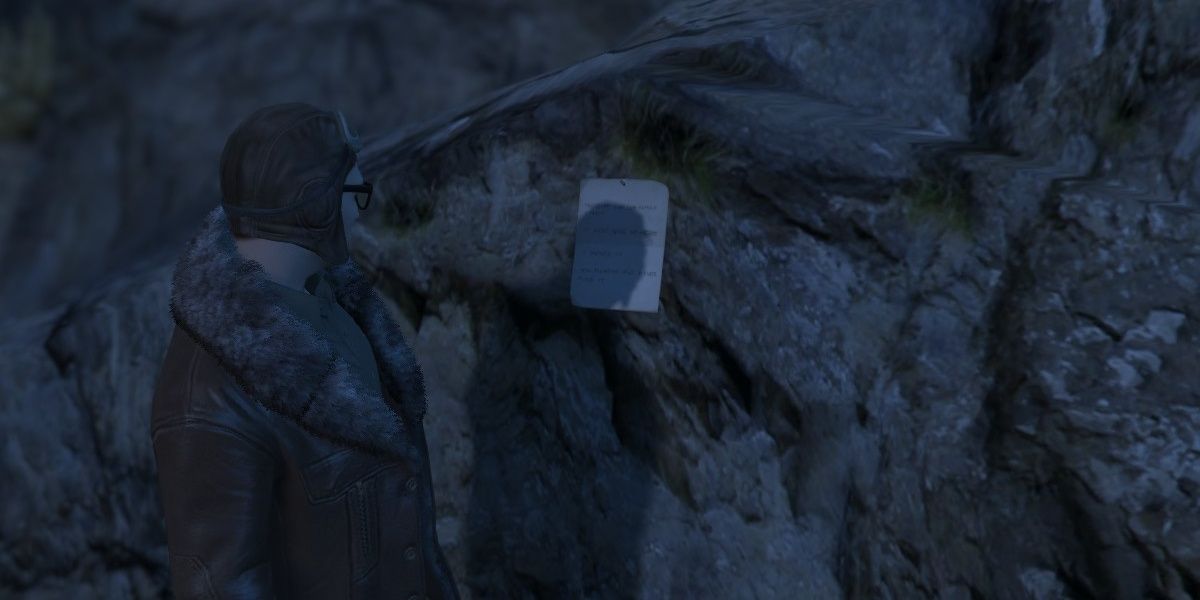 After receiving the photo, the location will be marked on your map with a yellow question mark. Once there, you’ll have to start looking for a clue. While the search radius is kinda wide, all you have to do is focus on finding a note (it looks like a page someone tore from a notebook) that’ll be pinned to a rock, a tree, or any other object.

Keep in mind that all the picture you received tells you is the area you’ll have to search. It doesn’t mean that the clue will be in the exact same place where the picture was taken. 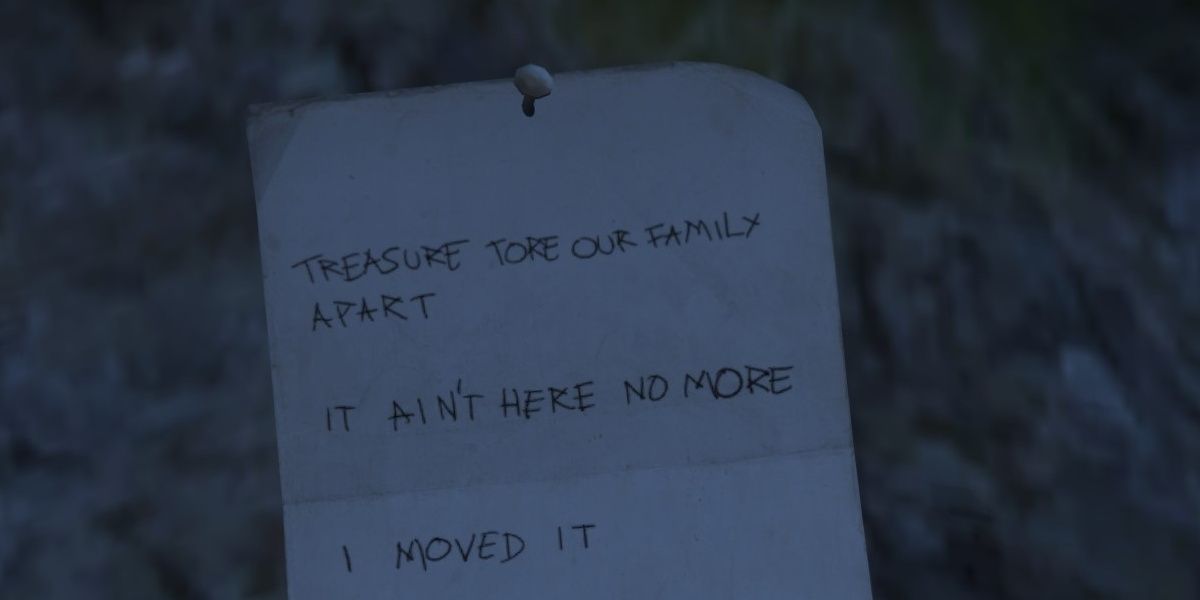 After finding and reading the note, you’ll realize that the treasure isn’t there anymore because someone decided to move it since it was tearing their family apart. However, it isn’t a complete loss since three new points will be marked on your world map, each with new clues about where to find this mysterious treasure. Also, It doesn’t matter in which order you find these, so don’t worry about that.

In each one of these new locations, you’ll find three different objects related to the treasure: 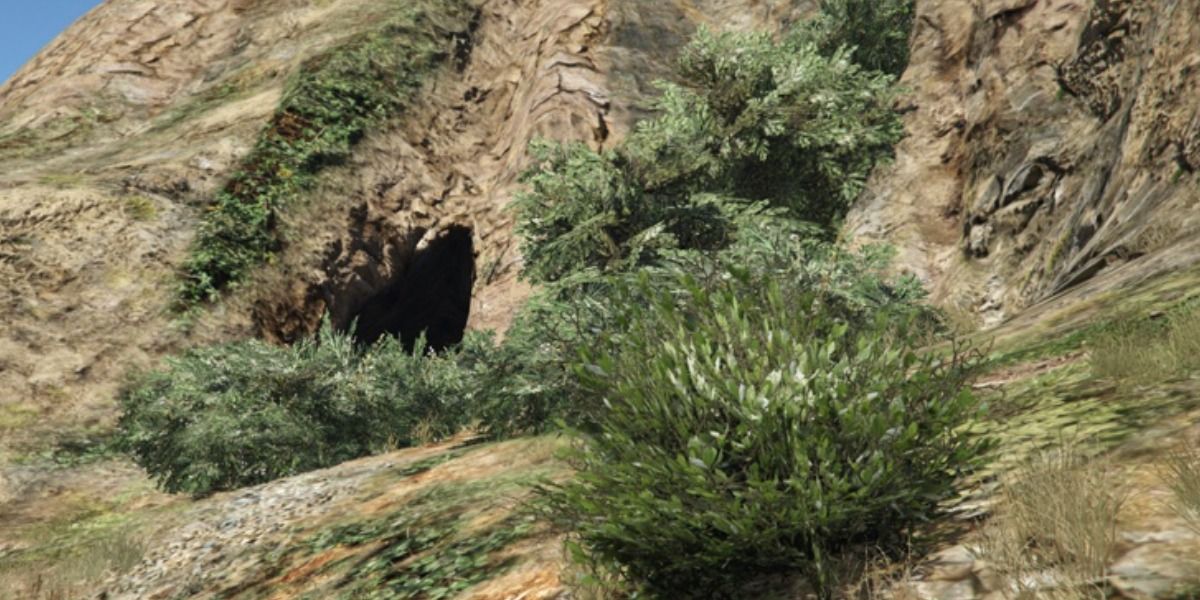 The victim’s body will be in Tongva Hills (on the Western side of your world map). Once you’re in the highlighted area, look for a cliff that has a cave under it. This one can be tricky to spot since shrubs partially hide the entrance.

Inside the cave, you’ll see the body lying on the ground. Funny enough, it only has boots, mismatched socks, and its underwear. All you have to do is walk towards the body and investigate it to mark off the clue. 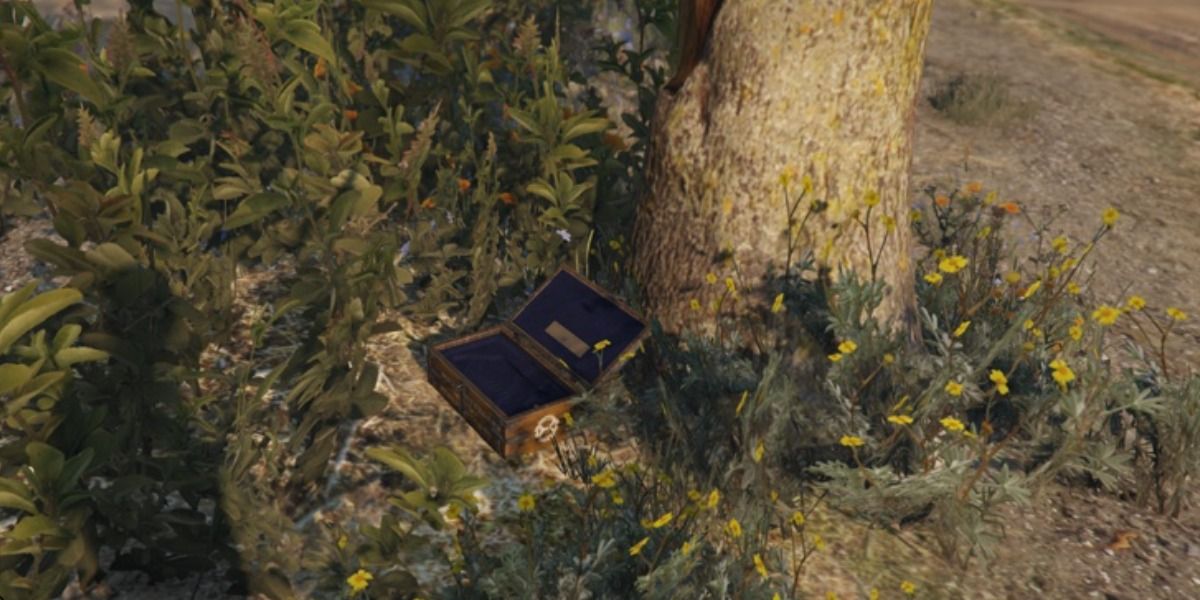 This one will be the most Northerly clue. You’ll see this clue is highlighting an area that shows a section of road in Grapeseed. Once you get there, you need to look for a big tree with a broken bark (it will be on the Western side of the road).

At the base of said tree, you’ll spot the open gun case. It has an indentation for a revolver, so that’s the gun it was meant to protect. Once again, walk towards the case and investigate it to mark off this clue. 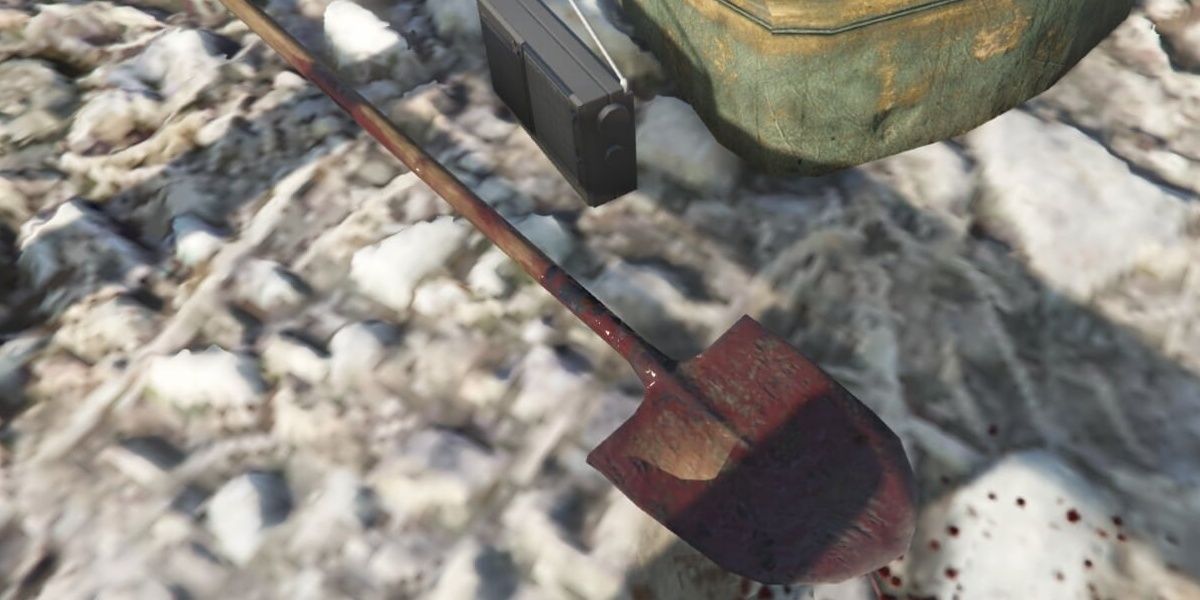 The shovel will be inside some wreckage that was once a house; this will be on the beach located in Sandy Shores, which is next to the Alamo Sea lake.

While the shovel is lying on the sand, you can spot it easily by looking for a green armchair; the murder weapon will be next to it. Investigate it, and the clue will be marked off. 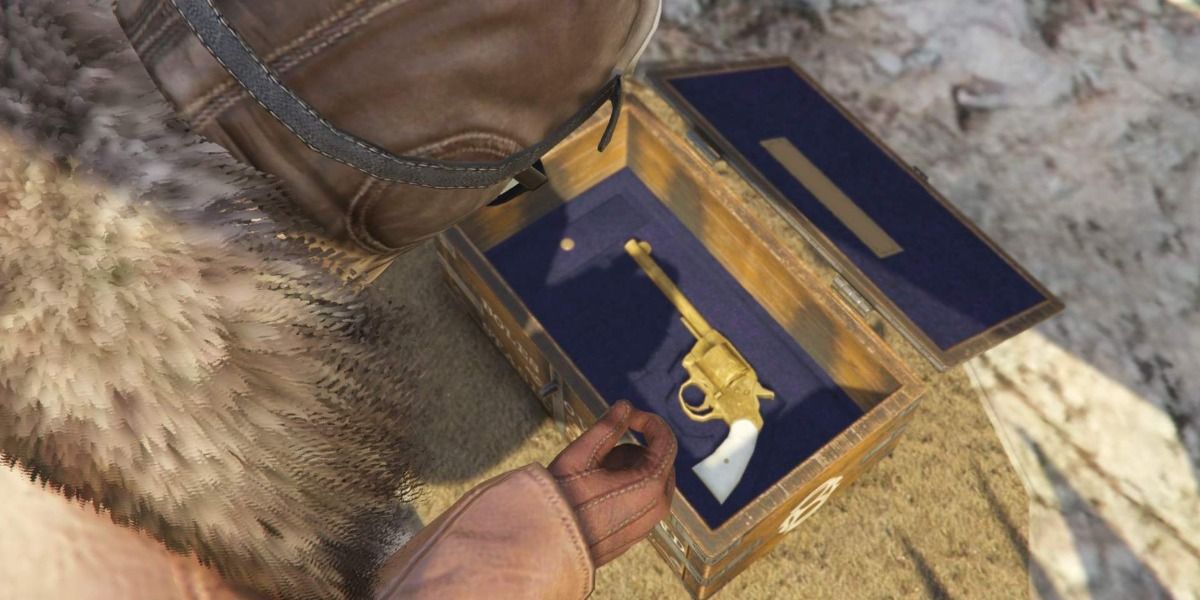 Now that you’ve investigated all the clues, it’s finally time to claim your reward. You’ll see that a new location is now marked on your world map, so head there next. Once in the area, you’ll see that the other people who were looking for this treasure died before they could take it, leaving all the booty to you! Good thing they had the courtesy of uncovering the treasure before killing each other.

Now walk towards the wooden box lying on the floor and interact with it to obtain:

Completing the challenge is a little bit of extra work, but it’ll make all of this treasure hunting worth it since it’ll give you an additional $250,000. All you have to do is get 50 headshots (either through PvP or PvE) while using the revolver. These headshots can be done during any mission or job that allows gunplay.

This challenge will also unlock an exclusive weapon in Red Dead Redemption II to those who complete it and have Rockstar Social Club linked accounts.