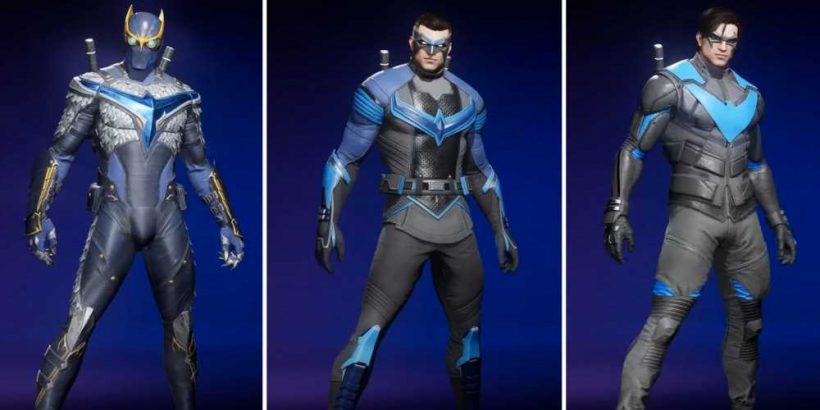 Dick Grayson, the original Robin, and later Nightwing, is quite the fan-favorite. Having been able to grow out of the shadow of Batman into his own character and preserving his hopeful, joyful nature makes him an amazing character.

Thankfully, Gotham Knights did not do Dick dirty and gave him quite a robust wardrobe to complete his look. Since Robin is also in the game, the developers had the chance to go all in on Nightwing, letting go of the character's history as Robin. Here are the best of the best. 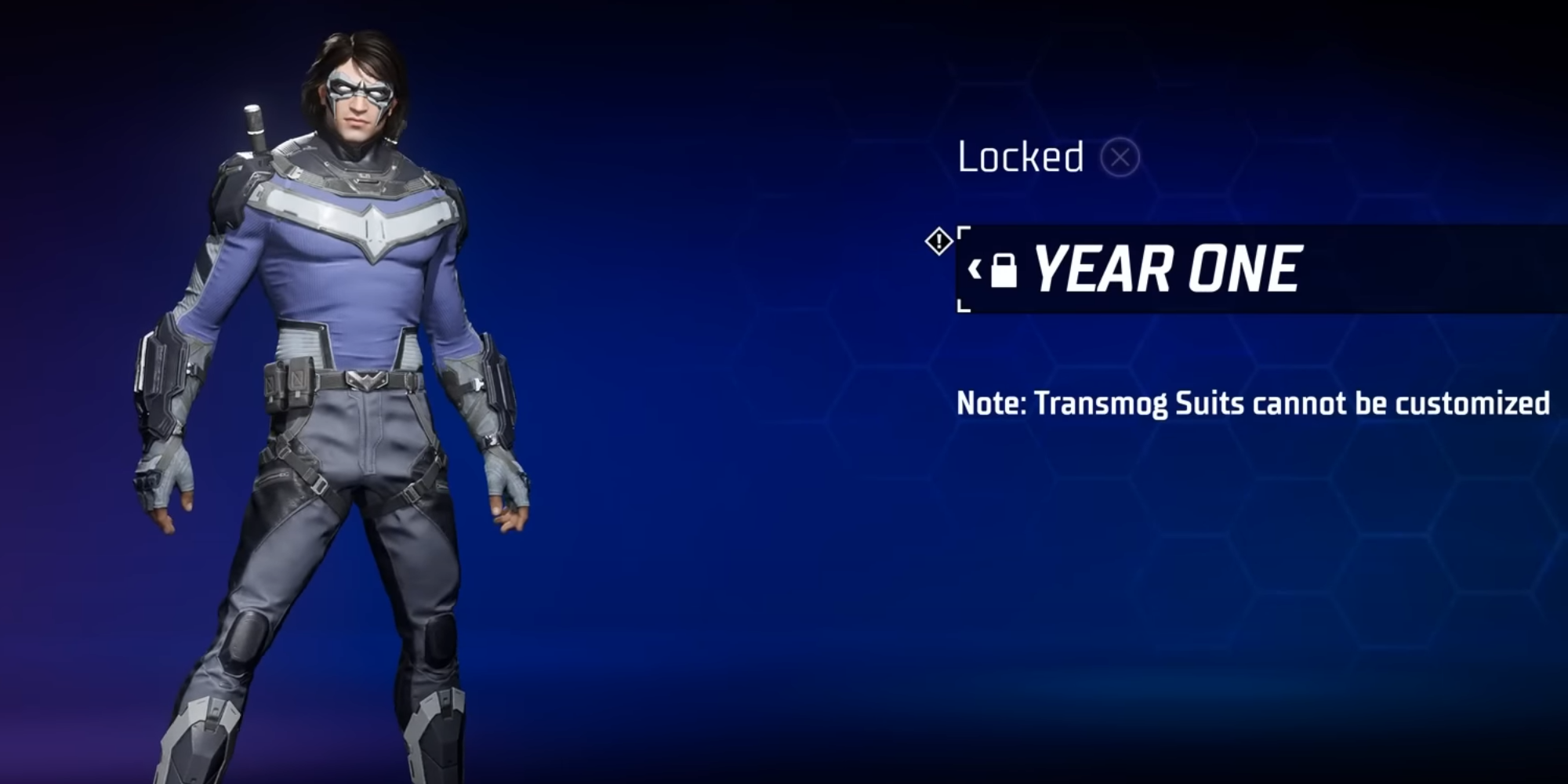 Year One is a really fun concept, focusing on characters' initial year of superheroes, giving you a chance to see them learn and grow, as well as make mistakes. Gotham Knights includes a Year One costume for all its characters, and Nightwing's is not bad at all.

Using a more homemade style, a Year One costume is supposed to be imperfect. While Nightwing's is cool and checks some of the boxes, it feels too professional and manufactured. The color of the top is a nice nod to his logo, but it's not the greatest at conveying the concept, unfortunately. 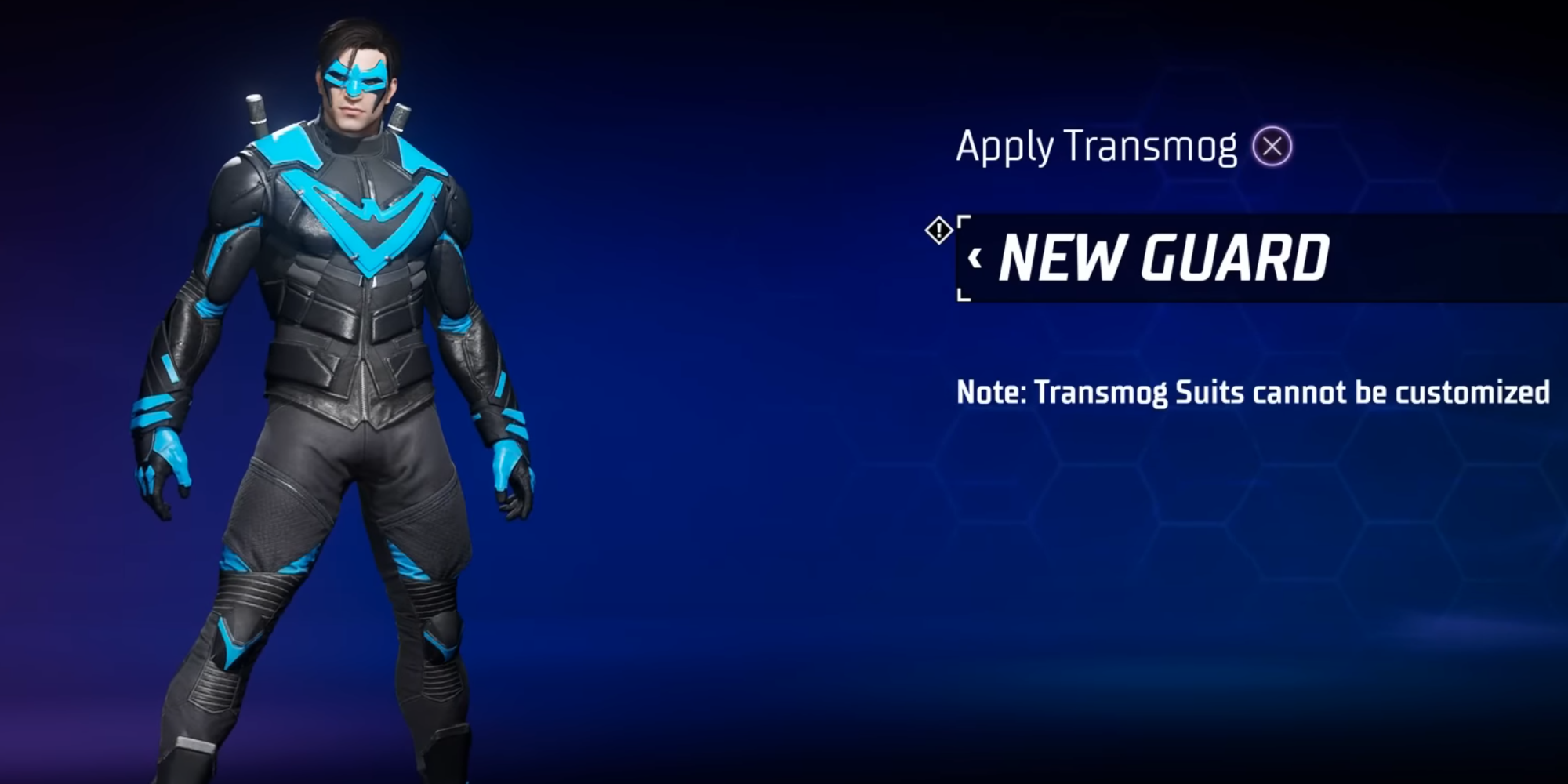 Speaking of manufactured, the New Guard costume is an interesting-looking piece of clothing. It is a full black suit, with a biker-jacket and pants feel. However, there are several bright blue accents and logo highlight that pops right out of the screen.

While the idea is cool, and the execution is far from bad, the lack of details on the black parts and the extreme hue of the blue feel a bit off. Still, it looks great in-game as you run around Gotham at night like a streak of blue. 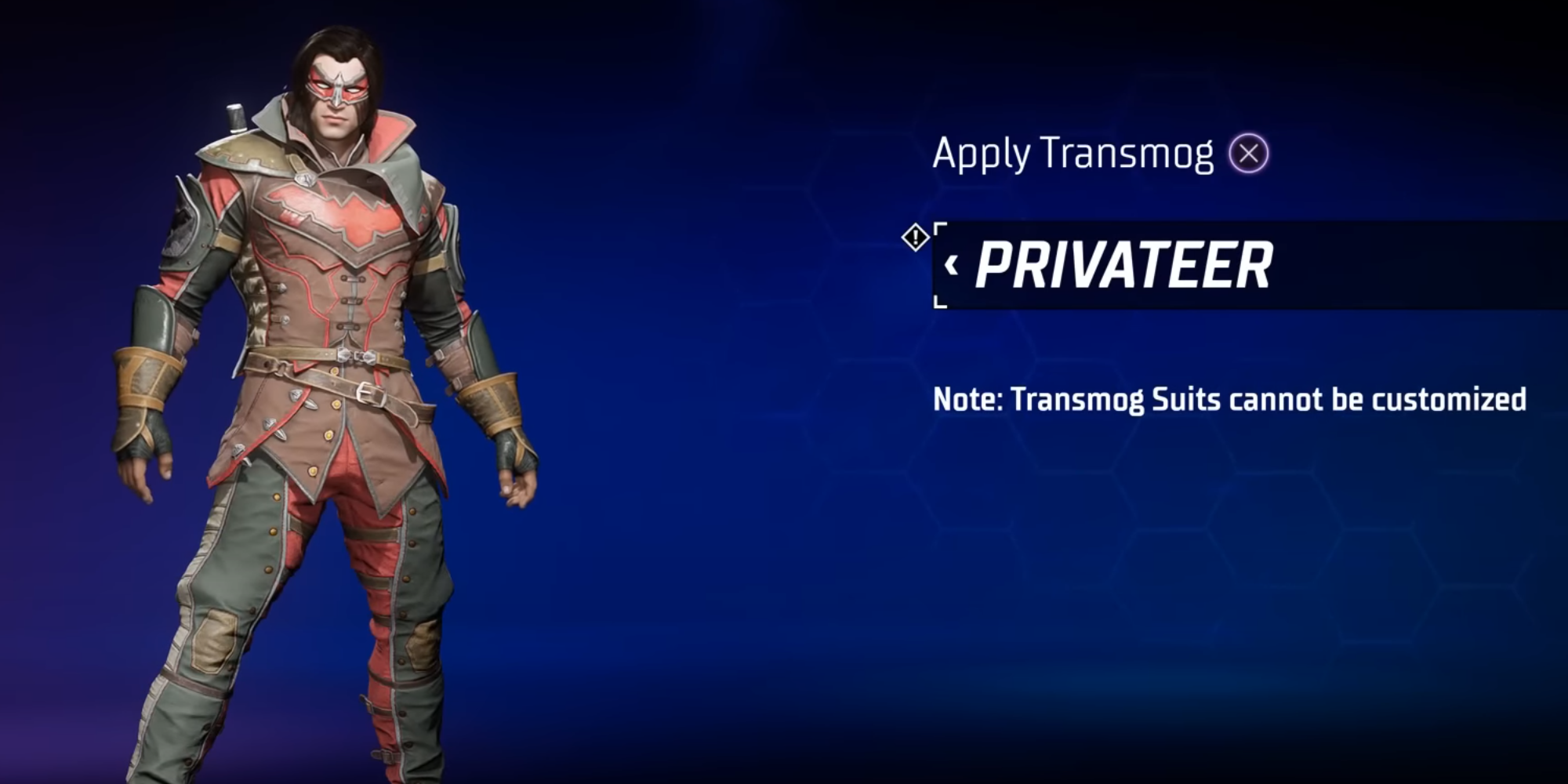 This is one of those costumes in a game that is there as a novelty. Like when an RPG includes a naked version of the main character as a skin. However, despite the randomness and the outlandish nature, the Privateer costume actually looks pretty great.

Taking inspiration from pirates, obviously, the Privateer suit has amazing detailing. There are tons of straps, folds, connections, and buttons to make this outfit come to life. The colors are subdued, which is fine since the design is already quite busy. It doesn't feel natural to patrol Gotham in this, but it is badass nonetheless. 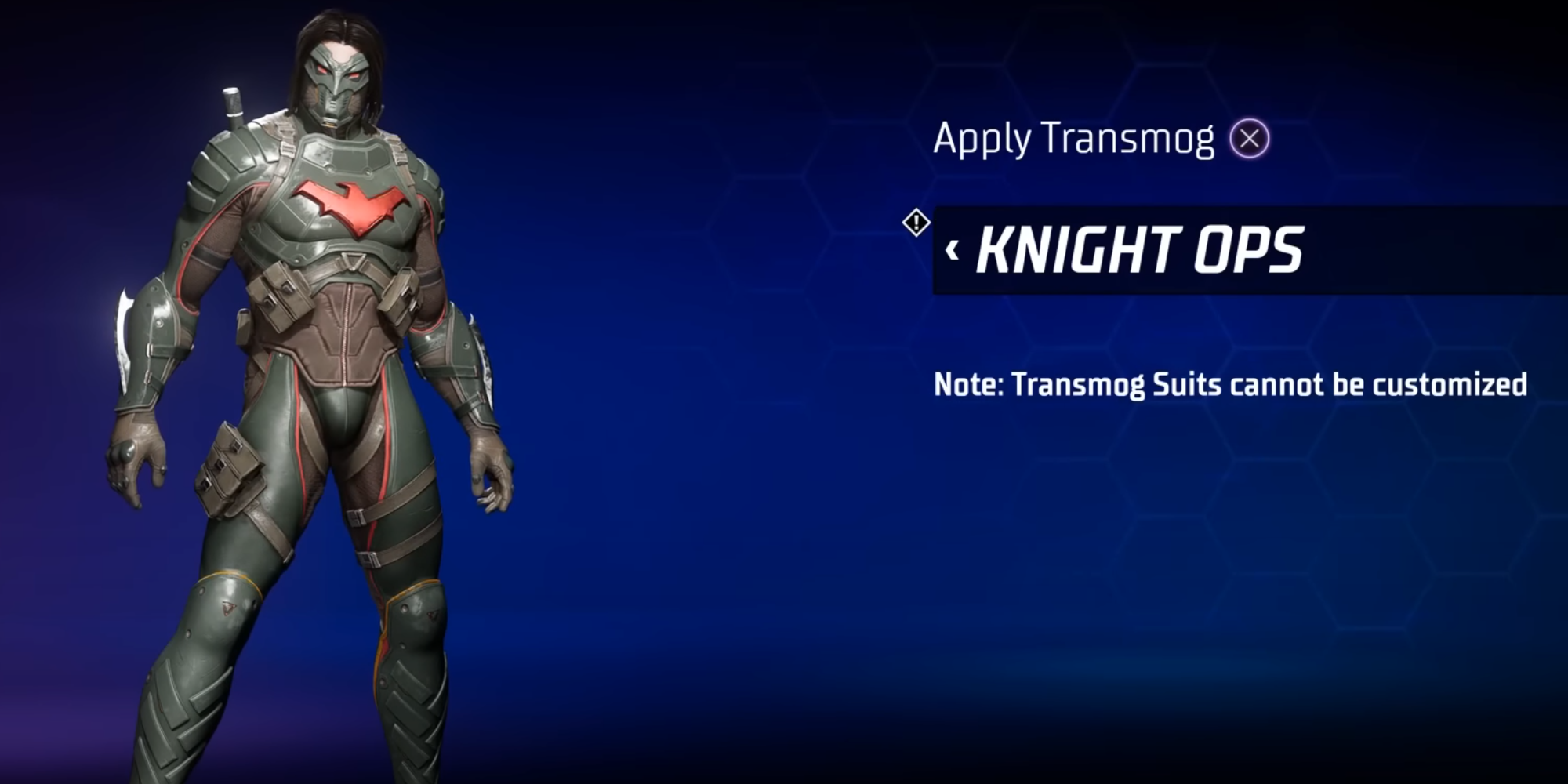 If Red Hood is the man to wear armor and Robin is the kid that fights in tights, Nightwing lands somewhere in the middle usually. While he's acrobatic, he uses some armor and gear when necessary. The Night Ops costume leans on the more armor-like look for Nightwing.

Utilizing a black armored look for stealth and a mask that covers Dick's mouth too – this looks like one hell of a stealth suit. The red logo feels a bit out of character, reminiscent of Damien's Nightwing from Injustice, especially when combined with the long hair. It's still an amazing-looking costume, though. 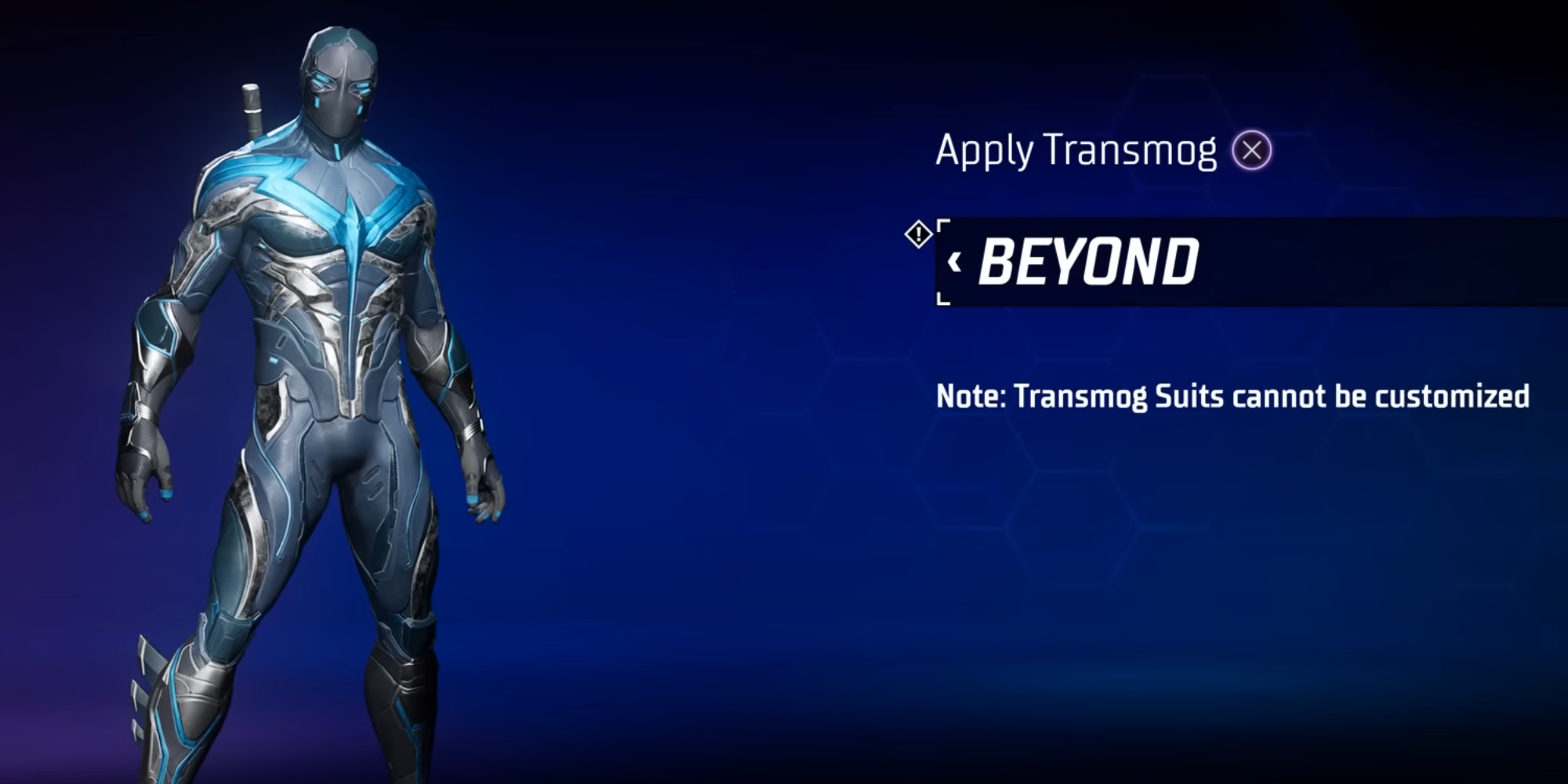 Batman Beyond, as well as being a beloved character, gave us one of the most iconic costumes in comic book history. Luckily, the designers gave us costumes inspired by the Beyond series for each character, and Nightwing's is one of the best.

While it feels Spider-Manish at times, this armor looks amazing. With the blue logo bleeding into the dark blue/black armor and creating an amazing flow, this costume just works. The helmet is a bit simplistic, with not too many defining features, but the whole thing makes Dick into a badass Nightwing Beyond. 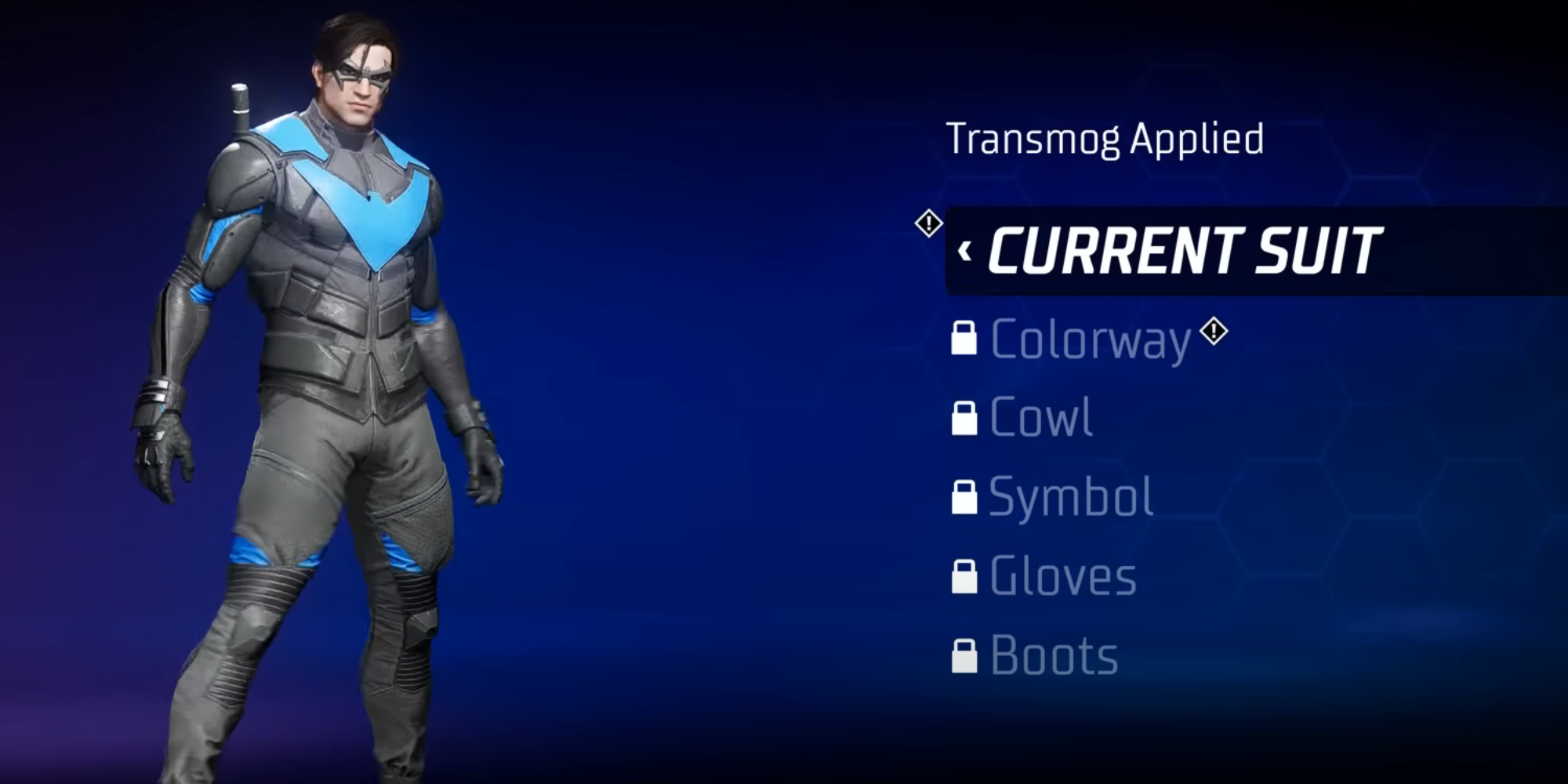 Many games give the players a default look that lacks in a few departments. That is, of course, to make the players more eager to play and unlock cooler costumes. Fortunately, Gotham Knights has some of the best default costumes. While not perfect, the default costume for Nightwing absolutely works.

Having practical pants and a vest that feels like they were bought from a bike shop, this costume feels agile and useful. The arms look a bit more armored up, giving contrast and character to this suit. The best thing about this one is likely the giant blue logo and the mask, though, which both feel straight out of the comics. 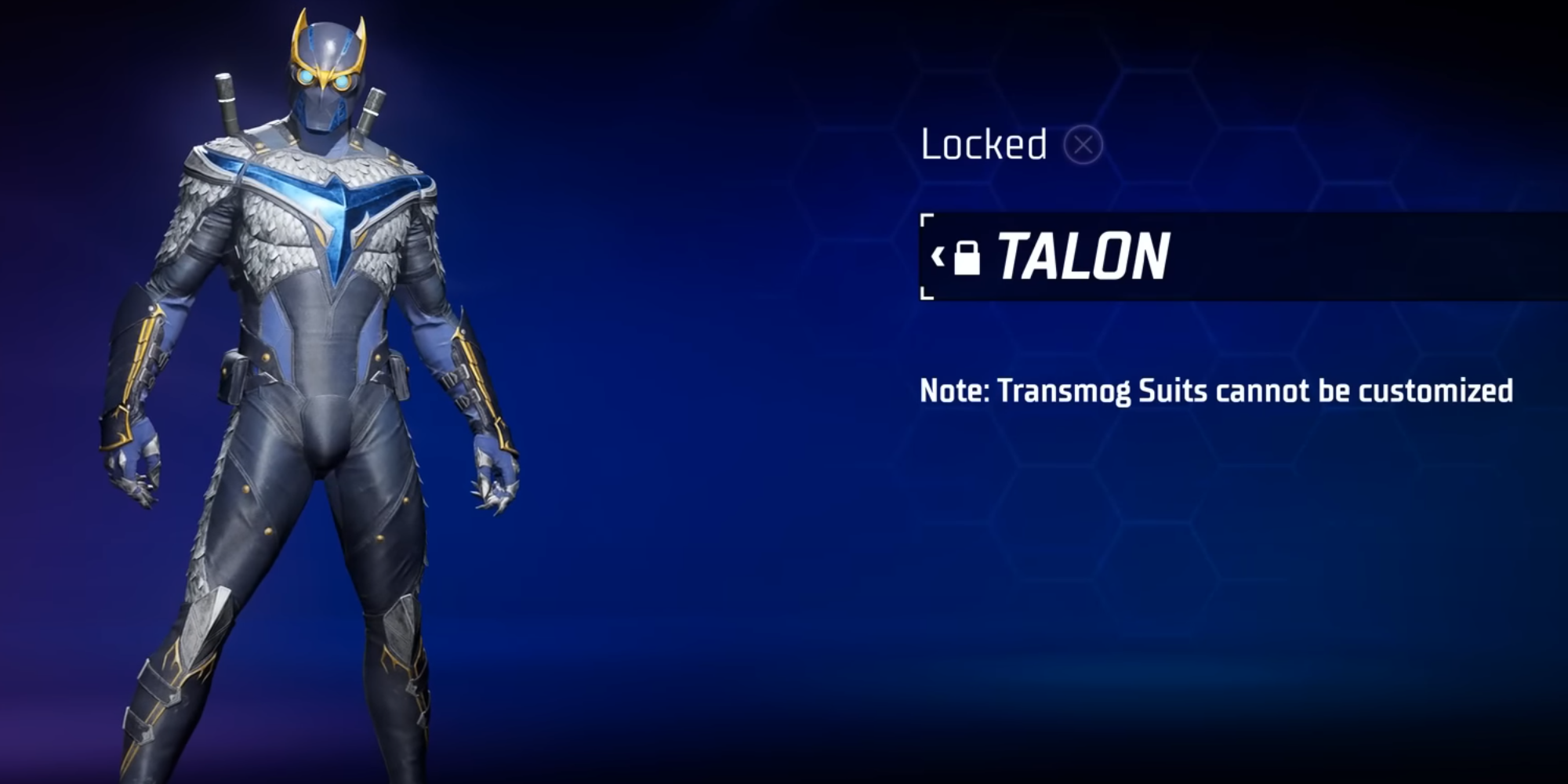 Talons are the soldiers of the secret society Court of Owls in the DC universe. The Court is also one of the main antagonists of Gotham Knights, and thus, a Talon-inspired look was given to all playable characters.

While the Talon look is iconic, it can overshadow the characters' features and turn them into a regular Talon. Fortunately, that's not the case for Nightwing. He retains his iconic logo and color scheme and gets to add some ninja gear and the Talon goggles and ears to his look. This is, without a doubt, the best Talon costume in the game. 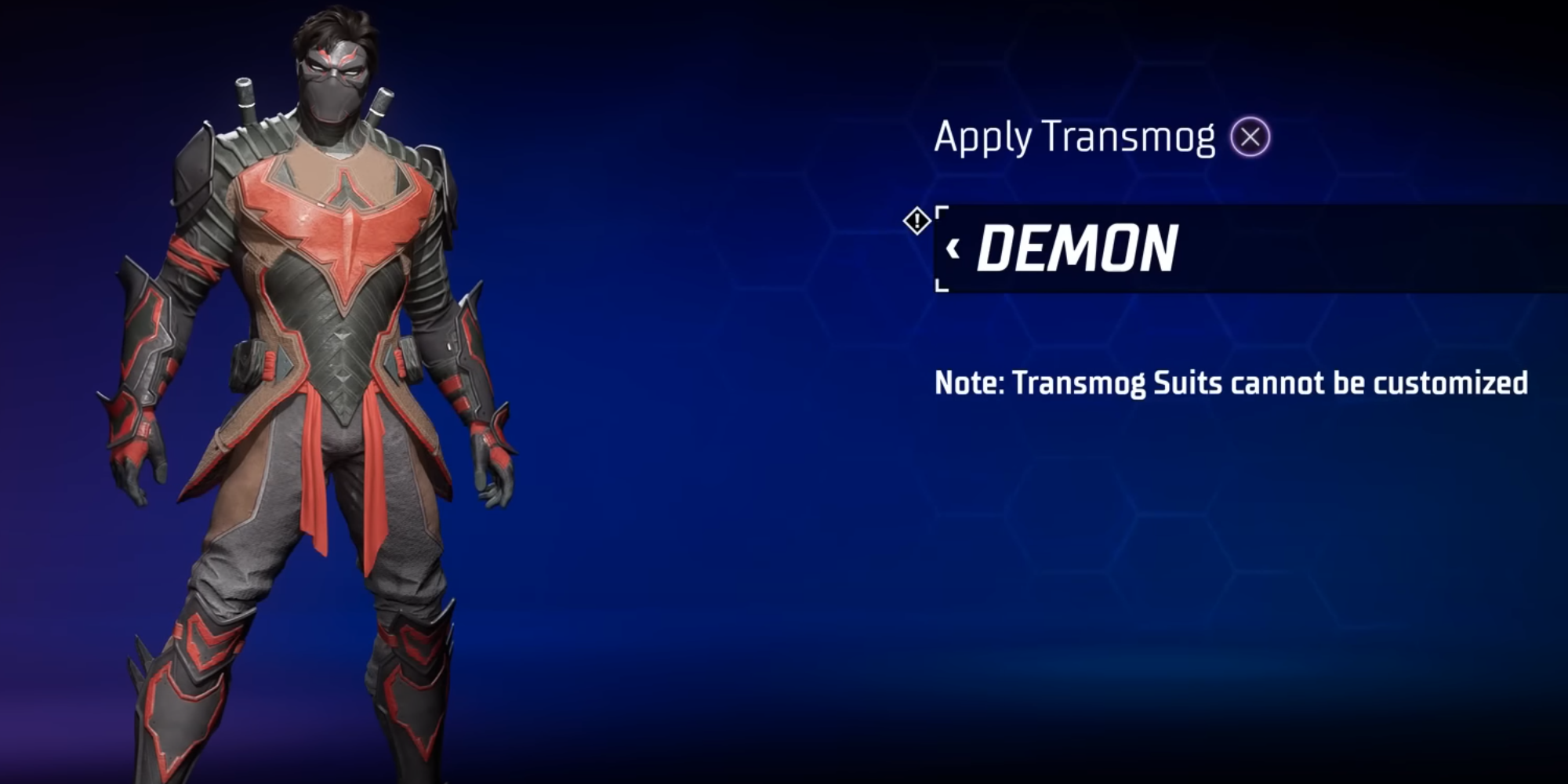 The Demon costumes are the perfect fit for any member of the Batfamily. Inspired by the League of Shadows and Ra's al Ghul, this outfit leans heavily on the ninja look and practicality.

The design and texture of this outfit are incredible, immediately evoking the assassins of Ra's al Ghul and feeling totally practical. The mask is awesome, too, with the mouth being covered and the eyemask expanding into a headband-looking piece. While the red logo doesn't feel as iconic as the blue one, this outfit is totally worth using. 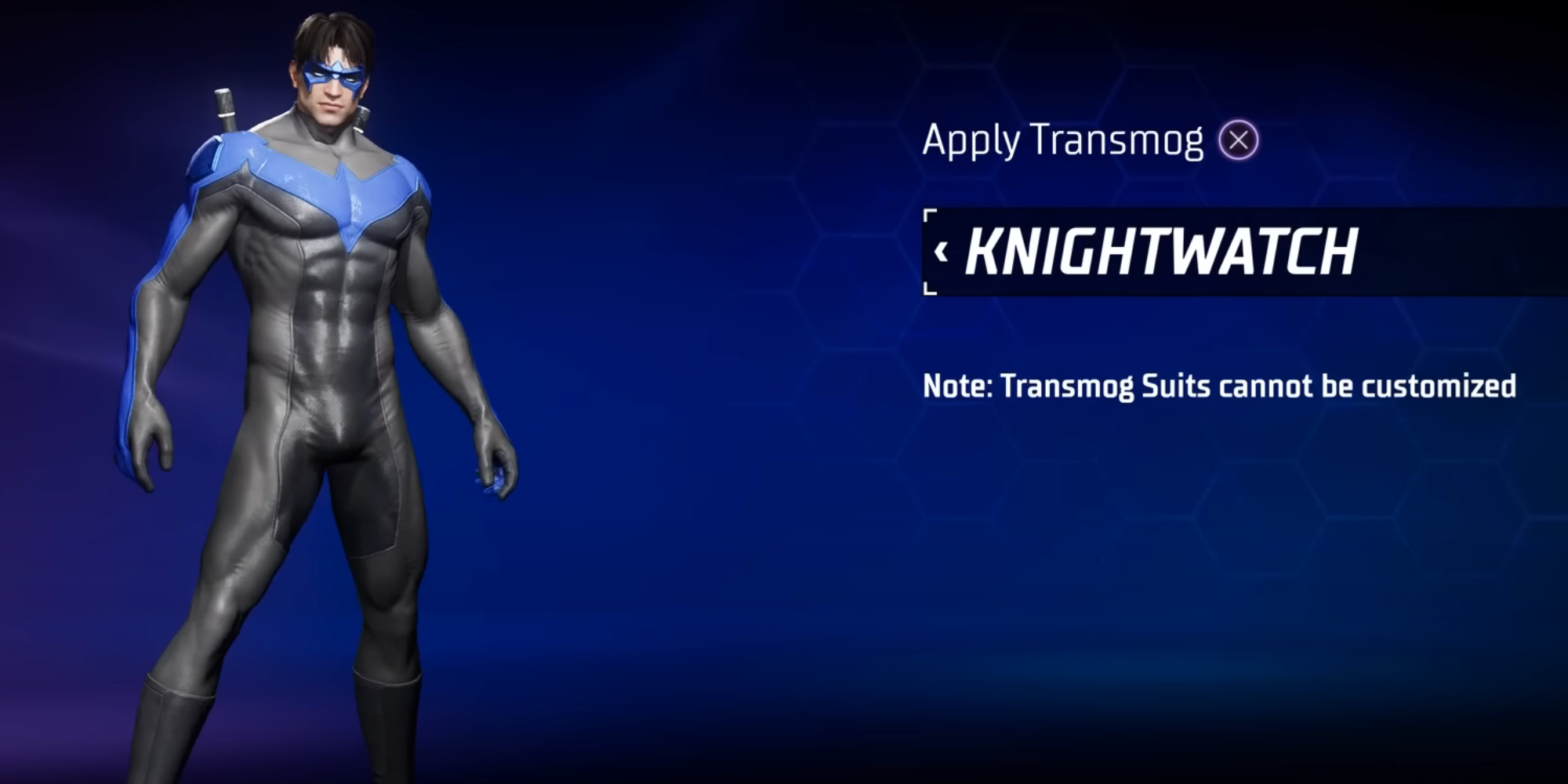 Speaking of iconic, we have the Knightwatch costume, which is the more classic, comic-accurate set of costumes in this game. Therefore, it's one of the fan favorites too. This one, while simple, absolutely represents Nightwing and works as a great option.

The costume is simple in design, being a one-piece body suit that's all black and grey, with little accents to add dimensionality to it. The bright blue logo, combined with the great mask, absolutely shines on such a muted costume and is instantly recognizable. Surely it is not the most complex costume, but an absolute treat nonetheless. 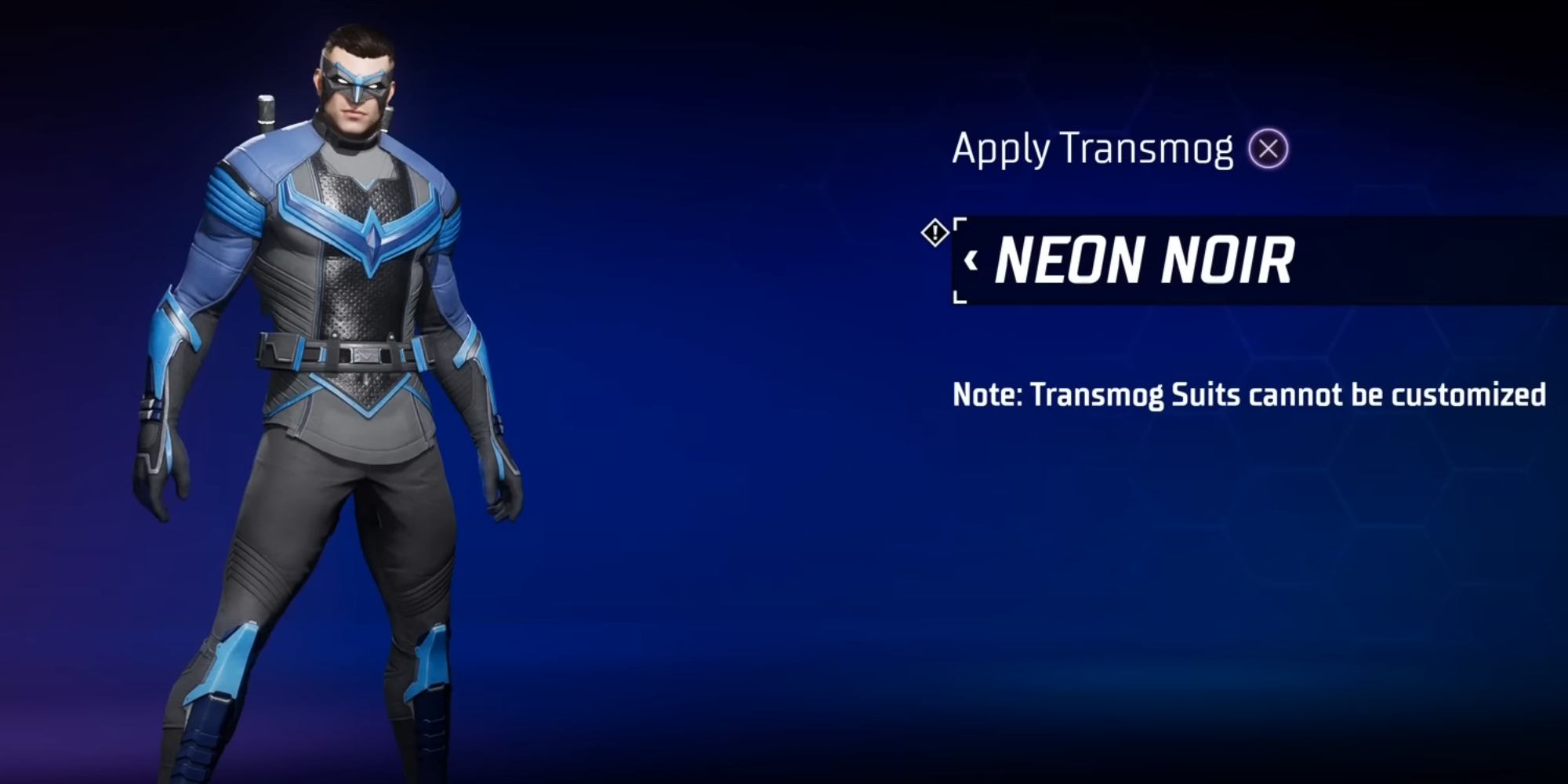 Neon Noir is a unique set of costumes, utilizing some futuristic design ideas but keeping a noir look overall. The combination somehow turns out to be the best outfit for Nightwing. The costume feels practical yet protective. It is also likely the costume with the most amount of textures and fabrics in one costume.

The grey and black base allow the blue to pop out of the screen, just like the Knightwatch costume. The logo, shoulder pieces, and gloves all have a different feeling material to them and look great. The blue line work on the waist and belt adds depth to this costume. When completed with a simple yet gorgeous mask, Neon Noir becomes the best outfit for Nightwing in Gotham Knights.