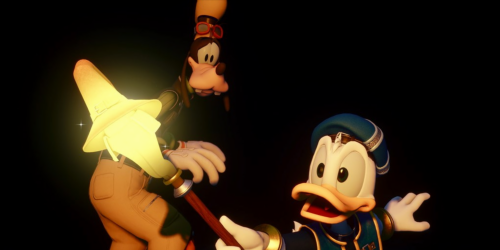 Goofy's voice actor, Bill Farmer, has only just found out about Kingdom Hearts 4.

Kingdom Hearts 4 was announced last month much to the excitement of fans. We don't know too much about the game just yet, with most of the trailer focusing on Sora waking up in Quadratum with a brand new look. The final shot of the trailer also confirms that Donald and Goofy will be key characters once more and seem to be looking for Hades in the Underworld. As it turns out, Goofy's official English voice actor, Bill Farmer, had no clue that the game was in development at all until just a few days ago.

GameLuster's Nirav Gandhi saw Bill Farmer at his booth at MomoCon 2022, where he was apparently the first person to tell the voice of one of Kingdom Hearts' most important Disney characters that a fourth game is currently in the works.

Gandhi Tweeted about the encounter, saying, "I can't believe I just announced Kingdom hearts 4 to Goofy directly. He was like "you know they never told me these things, I only find out from fans at conventions. At least I know I've got work coming".

Farmer also elaborated a bit more on why he's only just found out about Kingdom Hearts 4, explaining that he only really hears about it at fan conventions as Square Enix deals with the Japanese voices first and sorts the English voice acting out after, which means Farmer likely won't have been told about it by Square Enix or by his agency until closer to the game's final stages of development.

Considering how early in development Kingdom Hearts 4 is, it's likely going to be a while before Japanese voice acting is completed, which means that it's going to be even longer until English voice acting begins. Looks like Bill Farmer might be waiting a little bit before he steps back into the shoes of Disney Castle's Captain of the Royal Knights.