Jon Bernthal might save Ghost Recon Breakpoint as former-Ghost, now-antagonist Cole D. Walker. “Might,” because all I played was a 45-minute demo, and he only appeared in a single scene. Who knows how often he shows up, or how his story plays out?

But what I can say is that in two or three minutes, Bernthal put on a better show than the entirety of Ghost Recon Wildlands. He’s got that Heart of Darkness, that Apocalypse Now madness down. You can hear it in his voice, as the Walker regales his comrade with stories about adventures in Mexico, breaking every once in a while to relay commands. It’s mesmerizing, his monologuing. We shot a lot of weapons and killed a lot of enemies in my Breakpoint demo, but the part I truly enjoyed was simply sitting back and watching that scene play out.

You’ll find it approximately halfway through the gameplay video above of our E3 demo, after we’ve rescued the scientist from the first base. We’ve also embedded another monologue video towards the end of this article.

Other than that, this is Ghost Recon Breakpoint running on a PC, though I was forced to play with a controller. Fairly standard at press demos, unfortunately. I also didn’t get the specific hardware specs for our demo, but it looked about as good as Wildlands before—which is to say, the draw distance is pretty phenomenal. I’ll miss the quiet realism of Bolivia, but I won’t miss the long stretches of emptiness. Breakpoint looks more like a video game landscape, but also seems more interesting to explore as a result.

As for the Ghost Recon aspects? I had a decent time, but it was a fairly short demo and we weren’t too concerned with tactics. Hell, with four strangers playing together it’s a miracle we pulled off even one sync-shot at the beginning. 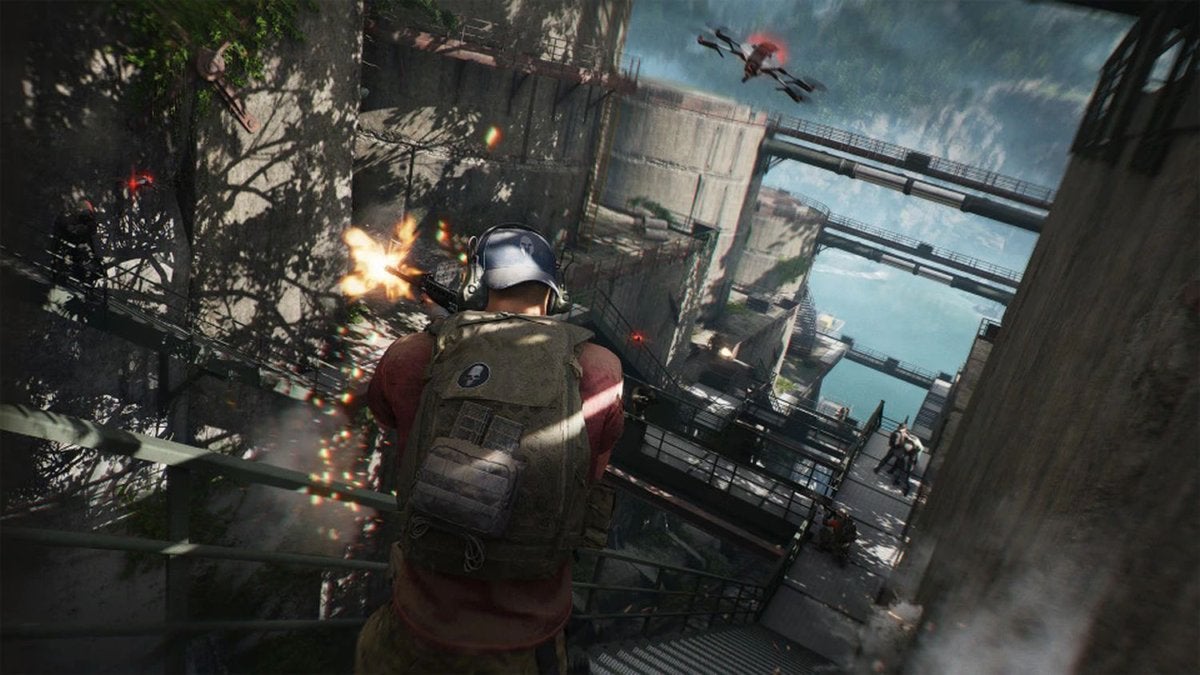 Scouting with your drone is still a lengthy part of the pre-mission prep process, which I find kills the pacing a bit. The two bases we assaulted were very distinct though, with plenty open spaces mixed with more confined chokepoints, which led to interesting fights. The AI is also a crafty asshole, and multiple times I found myself flanked without even realizing it—though our headsets were mixed for chat more than in-game audio, which didn’t help in that regard. The Division 2‘s AI fought in a similar fashion though, and it’s neat to see Ubisoft pushing shooter AI in this direction for its teamwork-oriented games. I definitely felt exposed whenever I strayed too far from my comrades.

Whether it can sustain my interest over 30 or 40 hours though? I don’t know. Wildlands started fine, but I quickly grew tired of assaulting outpost after outpost after outpost, especially since it rarely forced me to use new tactics or even switch out my weapons. Breakpoint‘s gear score system might necessitate the latter at least, but I’m hoping for more varied mission goals and unique setpieces to break up the monotony.

Really I’m just there for Bernthal though. The whole idea of a rogue soldier creating a drone army on a private island is dumb, but I really enjoyed what little of his performance I saw in the demo, and it’s enough to make me optimistic about a game I had zero reason to be optimistic about post-Wildlands.

And that’s encouraging news for Ubisoft, I guess. After all, Breakpoint is set to be their only release this fall. Better make it a good one.