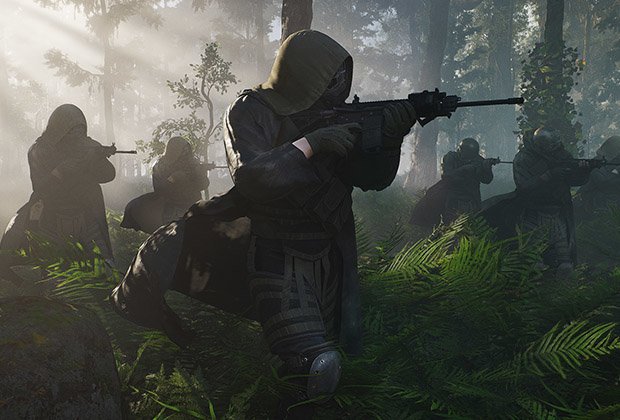 This latest Ghost Recon is unforgiving to say the least and while that may be a turn off for some, it’s precisely what hardcore fans want from the series. Fans who have a fireteam on standby to buddy up with. When played at that kind of high-tier level, Breakpoint can be extremely rewarding though the more casual crowd may struggle.

Our only major gripe with this early build of the game is that there’s often too much happening at one time. Our carefully planned attacks weren’t scuppered by someone with an itchy trigger finger or not being able to gel with the gameplay. Missions all take place within Breakpoint’s open world which means that emergent threats such as patrol trucks, drones, and helicopter bleed their way in. While this juggling act is clearly meant to ramp up the tension, here it just felt like a neverending conga line of things wanting to kill you.

The new injury mechanics Ubisoft has worked into the game can compound this issue somewhat. Carelessly navigating Breakpoint’s harsh terrain and getting shot can cause wounds that have you limping or bleeding out until you bandage them. Again, it’s another interesting idea on paper but can like a frustrating obstacle when pinned down in a firefight.

After more time spent with the game, outfitting your Ghost with better gear and being more familiar with enemy behaviour patterns, we hope these issues won’t be as prevalent.

Overall, it’s a step up from Wildlands and while some of Breakpoint’s systems could use some refinement before its launch in October, there’s a promising shooter here that could hold some genuine surprises for fans of the genre.