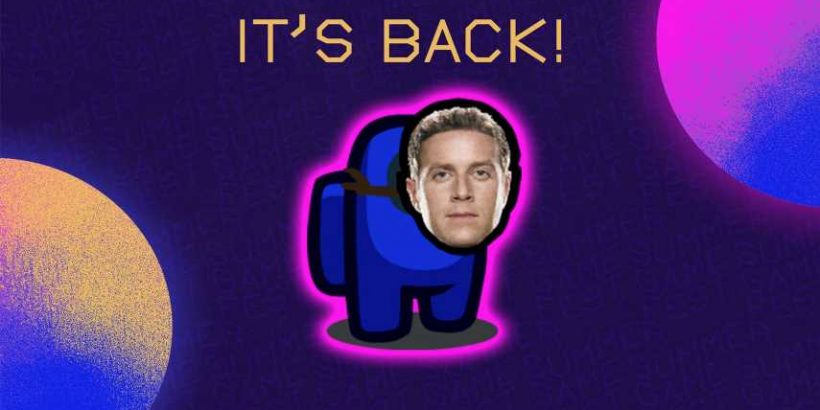 Are you still playing Among Us? Are you a big fan of online gaming personality and host of The Game Awards, Geoff Keighley? Well boy oh boy are you in for a pleasant surprise.

The face of the one and only Geoff Keighley is coming back to Among Us. Soon, you’ll be able to adorn your various multi-colored spacemen with that glorious, Mountain Dew-sponsored mug of his as a cosmetic mask. But how can you obtain such a fabulous prize? By simply watching this year’s stream of the Summer Game Fest live on Twitch.

Yep, it’s that easy. The Summer Game Fest Kickoff Live stream will be shown on Twitch this upcoming Thursday, June 10th at 11 AM PT/2 PM ET. According to Keighley’s Twitter, all you need to do to earn the right to wear his face in Among Us is watch 15 minutes of the stream. Doing so will reward you with this mask as a Twitch drop.

For those unaware of Mr. Keighley’s projects outside of The Game Awards, the Summer Game Fest is a showcase for many game publishers and developers. It typically features quite a few game announcements, a Day Of The Devs show hosted by the people over at Double Fine, and some special guests (such as Weezer who will be performing this year.)

When it comes to big announcements, we do know some of the big reveals that will be coming to Summer Game Fest. Gearbox is unveiling a new game that will possibly star Tiny Tina, the Call Of Duty Season 4 premiere will be shown, and Devolver Digital will show us four all-new titles. There’s said to be around 30 new games at this year’s festival, so this event is set to be one of the biggest yet.

As for Among Us, it’s still going ridiculously strong. It still has an insane amount of players, which was likely bolstered by it being given away for free on the Epic Games Store recently. On top of that, a chicken nugget sold for a ludicrous $100,000 all because it vaguely resembled one of Among Us’ spacemen. That’s both a sign of the game’s incredible, ever-lasting popularity and the steep decline of human civilization.

So remember to tune in to the Summer Game Fest Kickoff Live stream if you want to add Geoff Keighley’s face to your Among Us collection. I think we all would have preferred to have gotten a Schick Hydrobot cosmetic instead, but I suppose this will do.