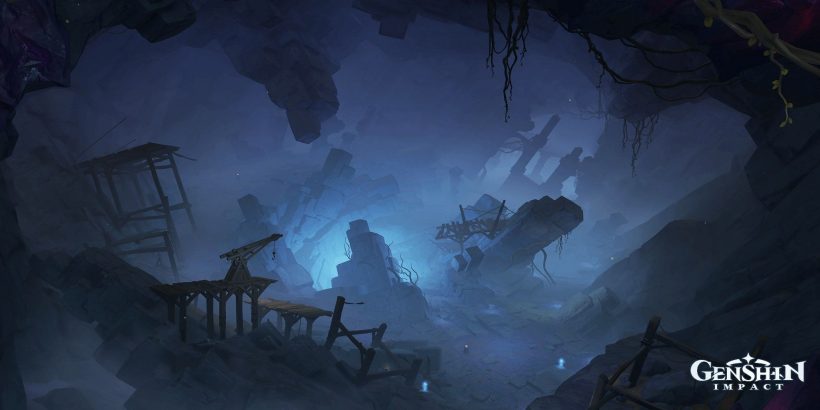 The newest explorable region in Genshin Impact, The Chasm, features unknown depths and untold dangers that will make even the most headstrong adventurers hesitate. If you're willing to take the plunge, though, you'll find a massive new area that's rife with compelling characters, clever mechanics, and treasures abound.

Part of the excursion experience is undoubtedly completing the numerous Exploration Objectives found in The Chasm. Whether you're invested in the lore behind the cave walls or you're simply in it for the loot, The Chasm has plenty of these to keep you busy. Not all of them are so obvious, however, as you might haphazardly come across an Exploration Objective you didn't even notice. This guide will walk you through the Hidden Exploration Objective "Locked Gate in the Nameless Ruins," which will make use of the Orbs of the Blue Depths.

Orbs Of The Blue Depths Locations

There are nine total Orbs of the Blue Depths scattered around The Chasm for you to collect. To obtain these Orbs, you must defeat nine named Shadowy Husks, each of which will drop one Orb. You won't even need to manually pick up the Orbs they drop—they'll automatically be added to the Quest Items in your Inventory once you take down their holders. You can also fight these Shadowy Husks in any order, but keep track of which ones you've defeated or else you might have to backtrack.

Remember that Shadowy Husks become stronger when they hit shields, so leave your Zhongli in the Serenitea Pot and get ready to dodge. Thankfully, the Shadowy Husks attack slowly. 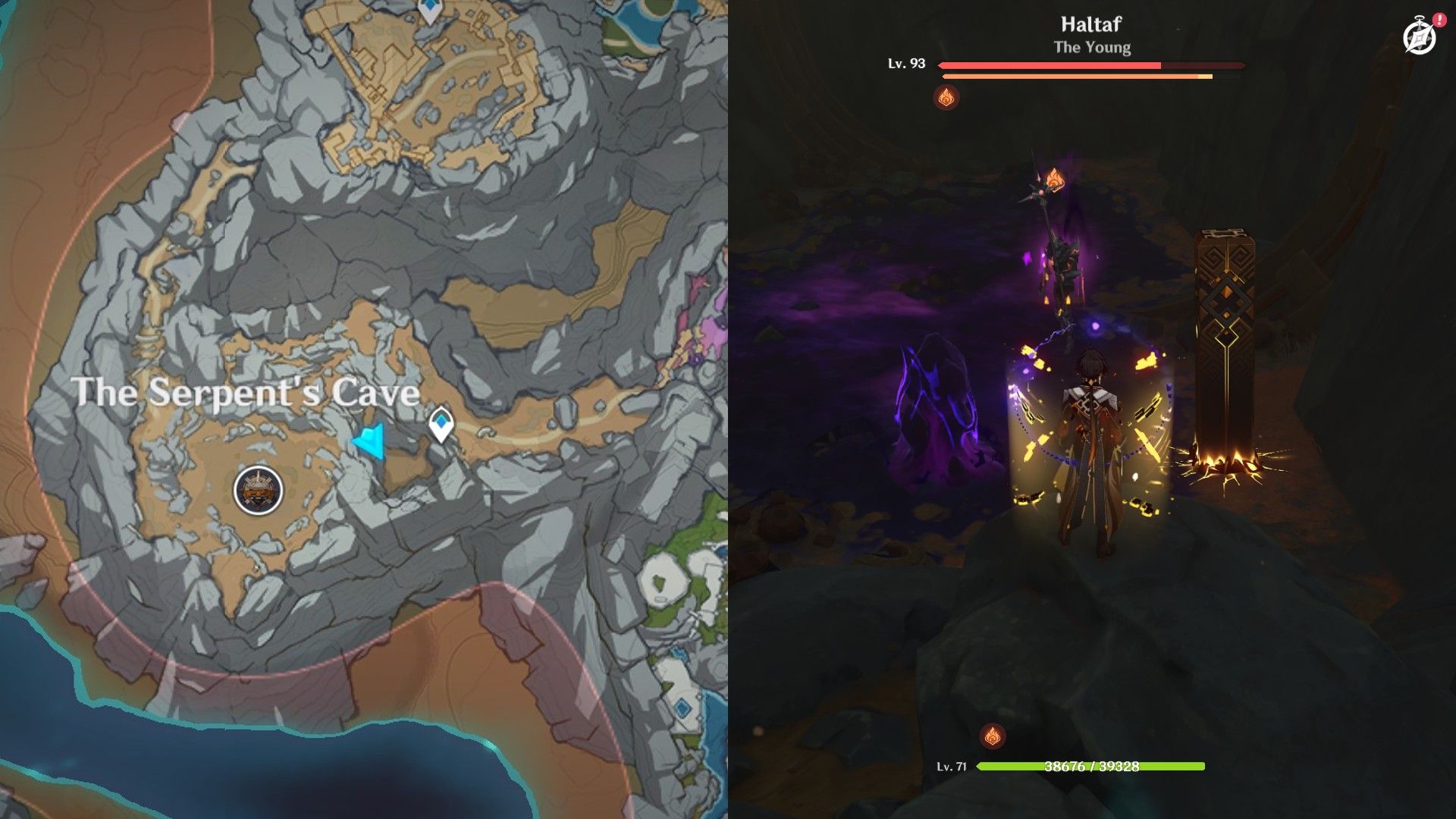 Halftaf can be found in a small trench right in front of the Ruin Serpent's arena in The Serpent's Cave. If you teleport to the Waypoint nearby, you can jump directly down and defeat Haltaf quickly.

Skeld: Augur Of The Mirrors 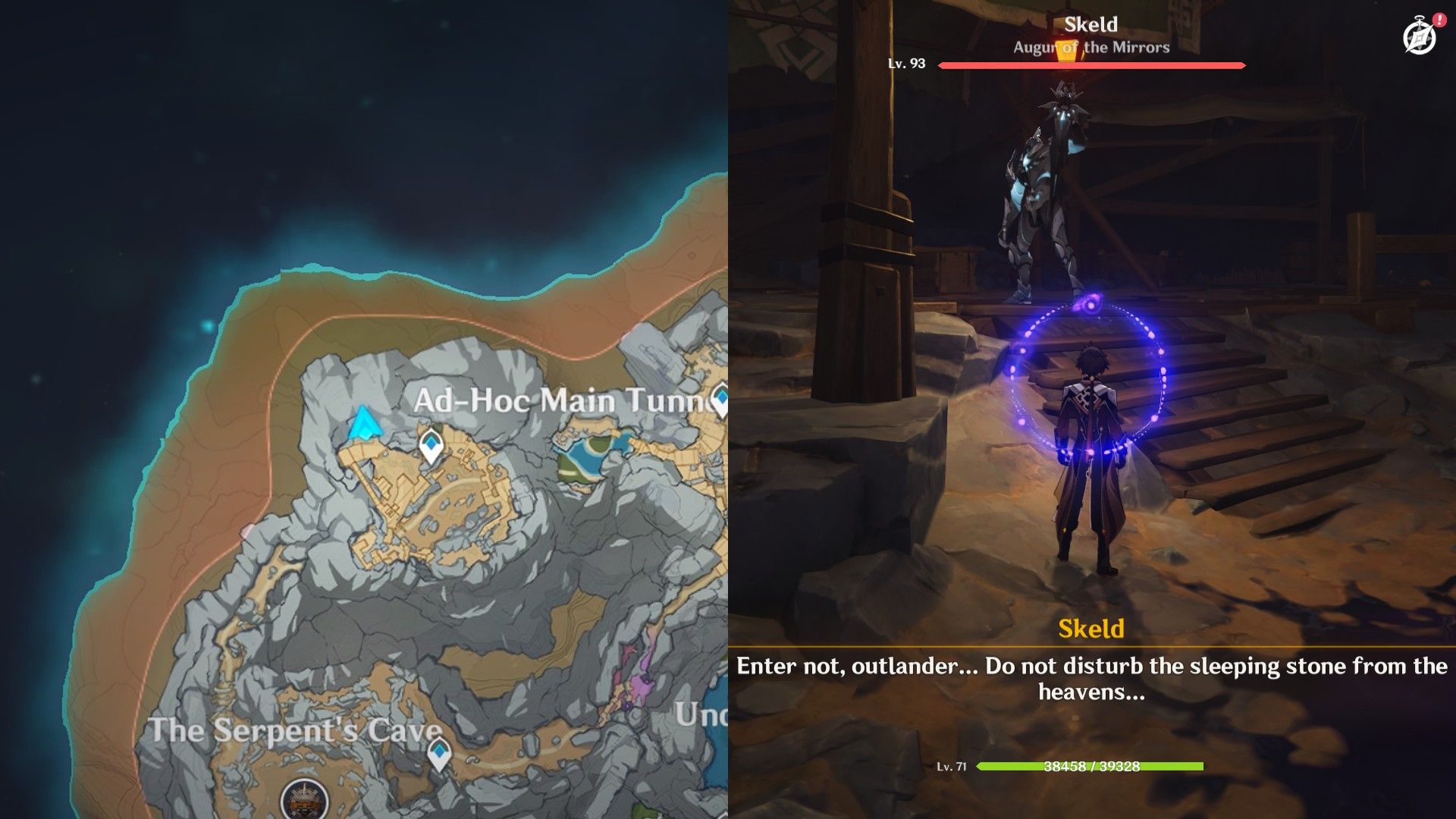 Edgetho: Breaker Of The Oath Of Silence 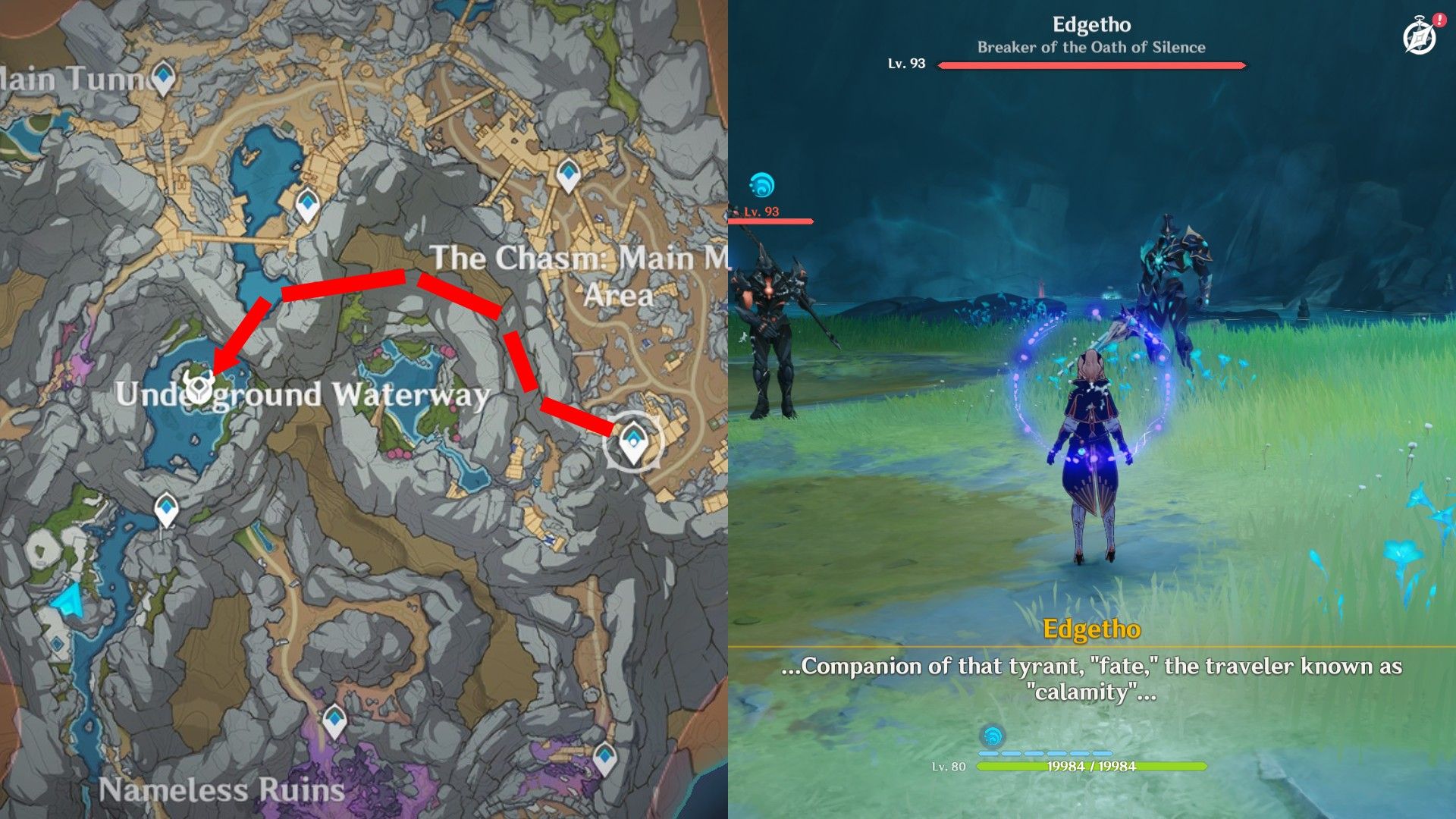 Edgetho resides in the middle of the Underground Waterway, but reaching this location is a little unintuitive. To find this area easily, travel to the Waypoint at the south end of The Chasm: Main Mining Area. From there, enter the passageway that's immediately to the west. Follow the path it leads you on by hugging the wall and staying as high as possible, and you'll eventually come to a clearing where Edgetho is located. 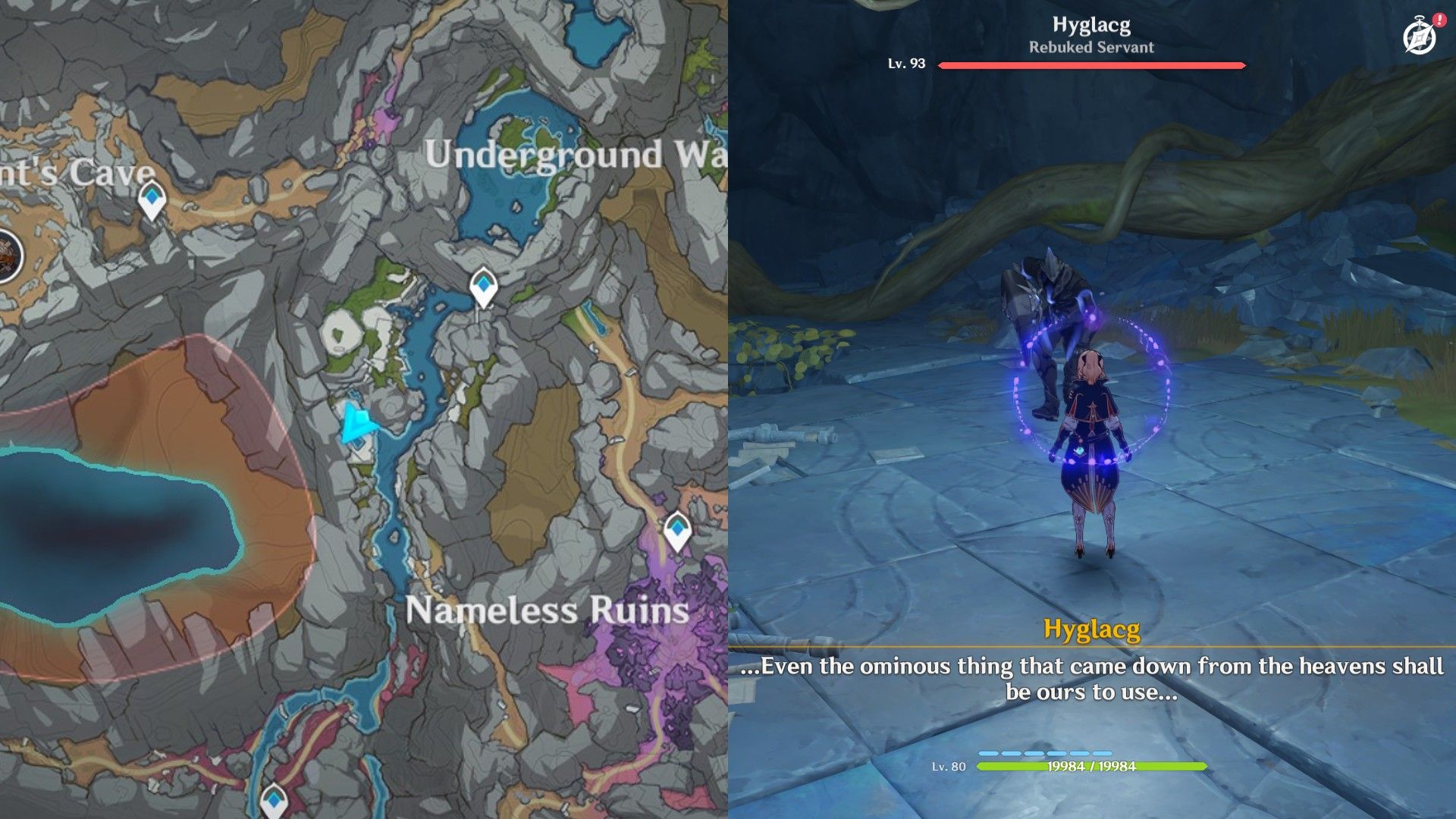 If you travel to the Waypoint in the Underground Waterway and move downstream, you can find Hyglacg (bless you) on the west side of the channel. He's a bit hidden, but scour this area on the map thoroughly and you should come across him. 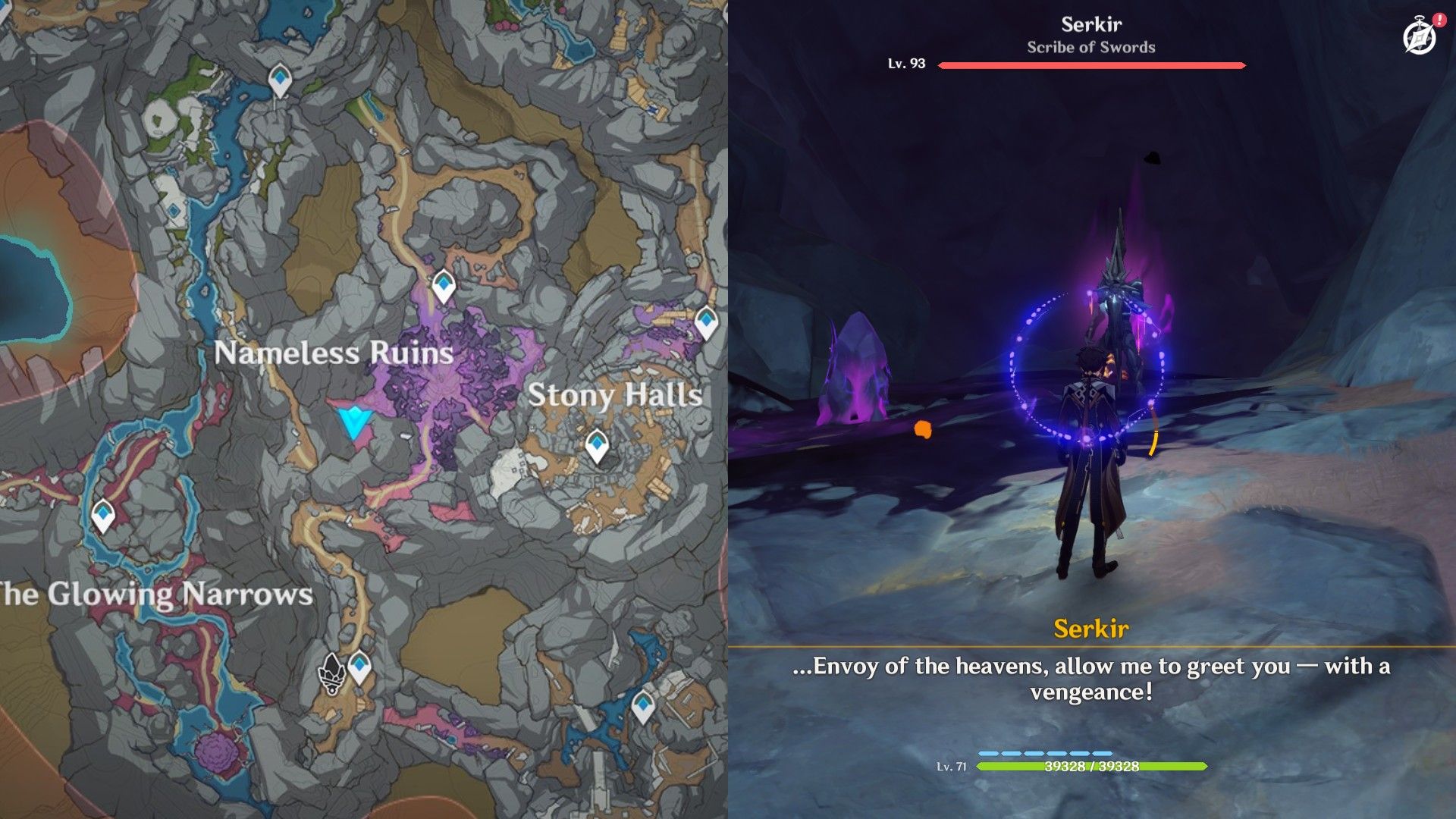 Serkir can be found in the southwest corner of the Nameless Ruins. Run along the ground to this location and you'll spot him in no time.

Buliwyf: Guardian Of The Desolation 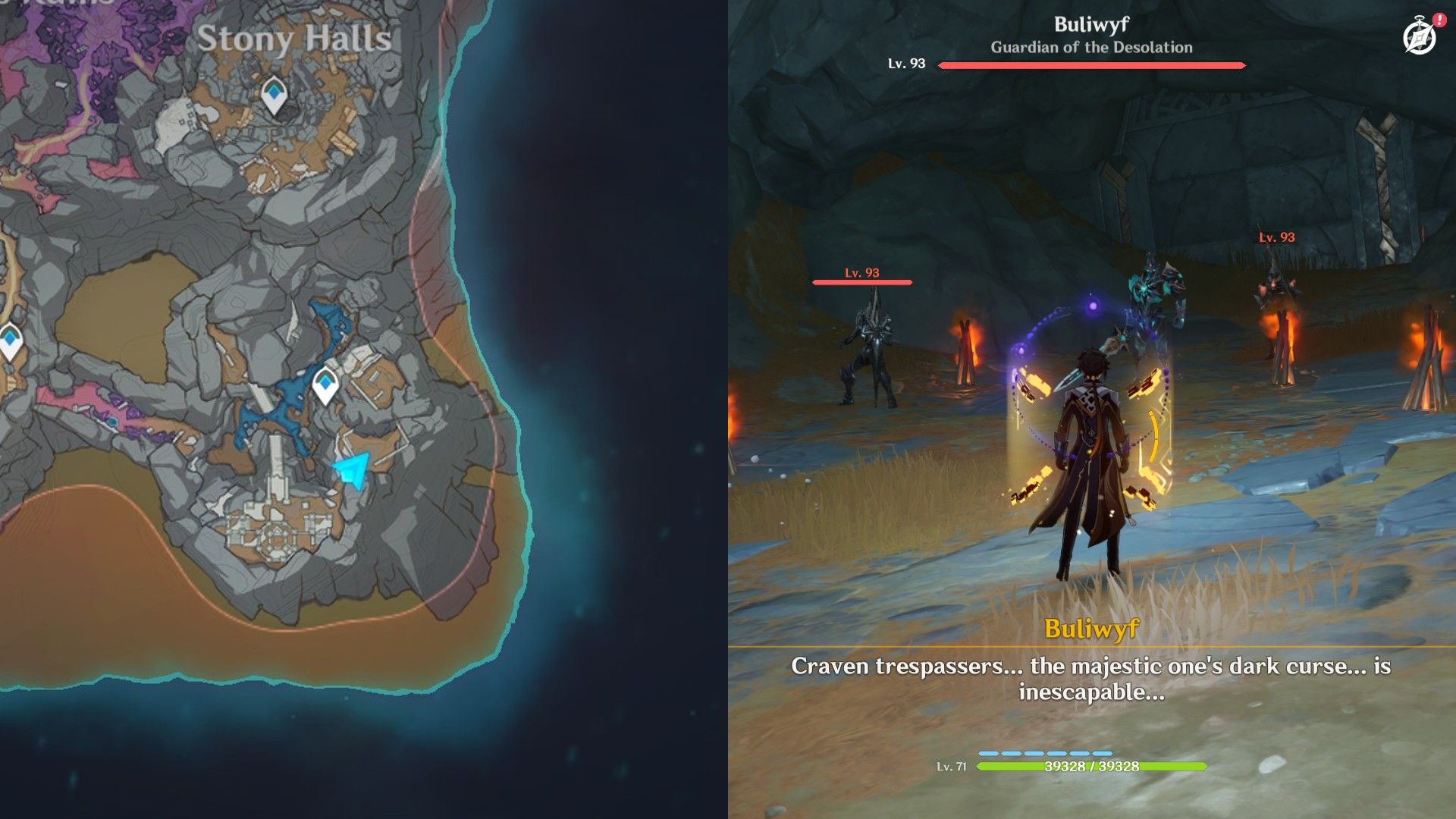 Buliwyf is another Shadowy Husk who is doing his best to hide. From the Teleport Waypoint south of Stony Halls, follow the elevated ridge on the east side until you see a rectangular room jutting out from the cave wall. The room has a cracked wall on one side that you can break open with Geo abilities or Claymore attacks. Inside, you'll find Buliwyf and his friends—take them out to obtain his Orb. 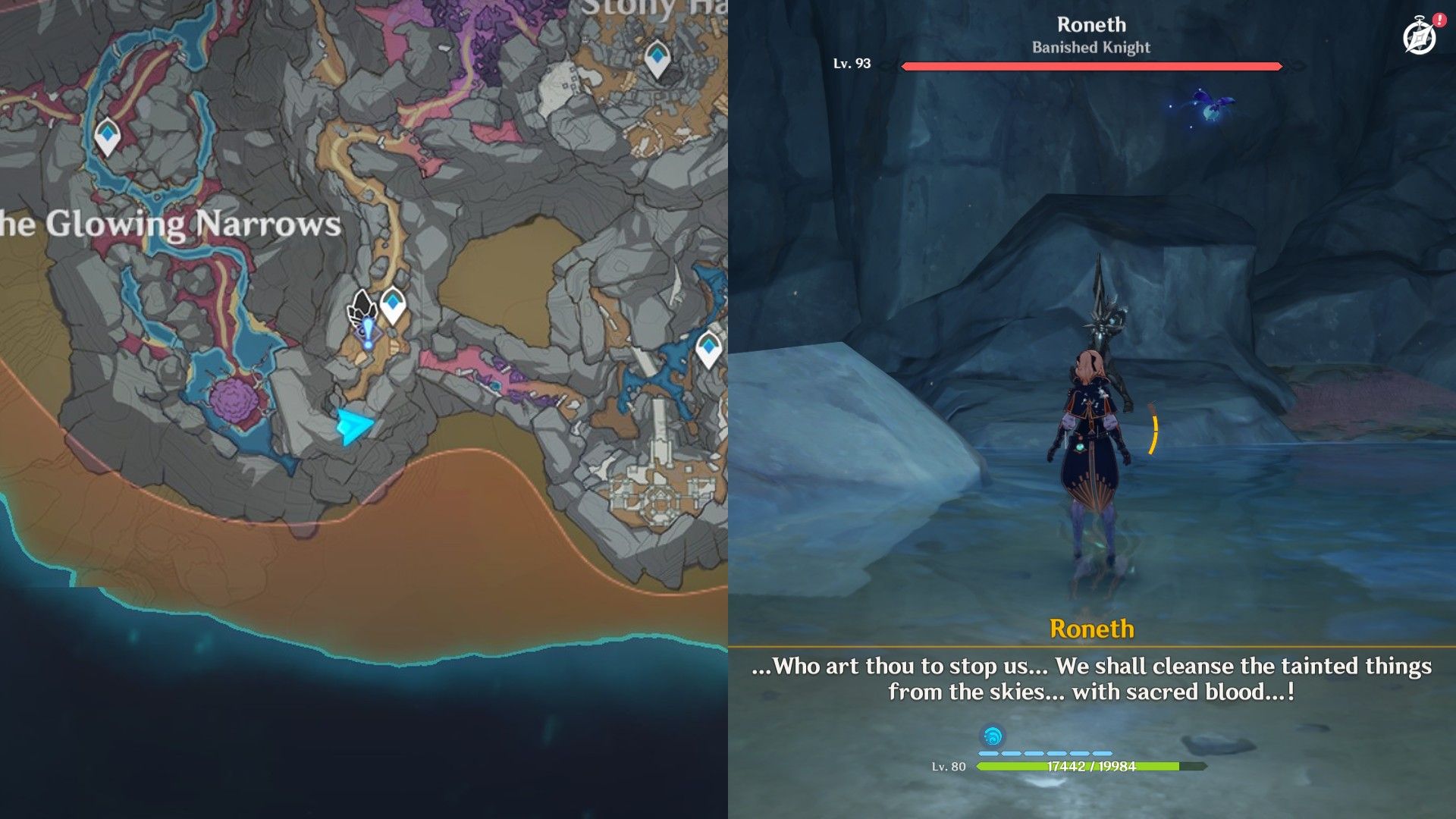 Roneth is easy to find if you start from the Waypoint on the east side of The Glowing Narrows. Just follow the main path downwards and you'll see him chilling in a small pool of water. 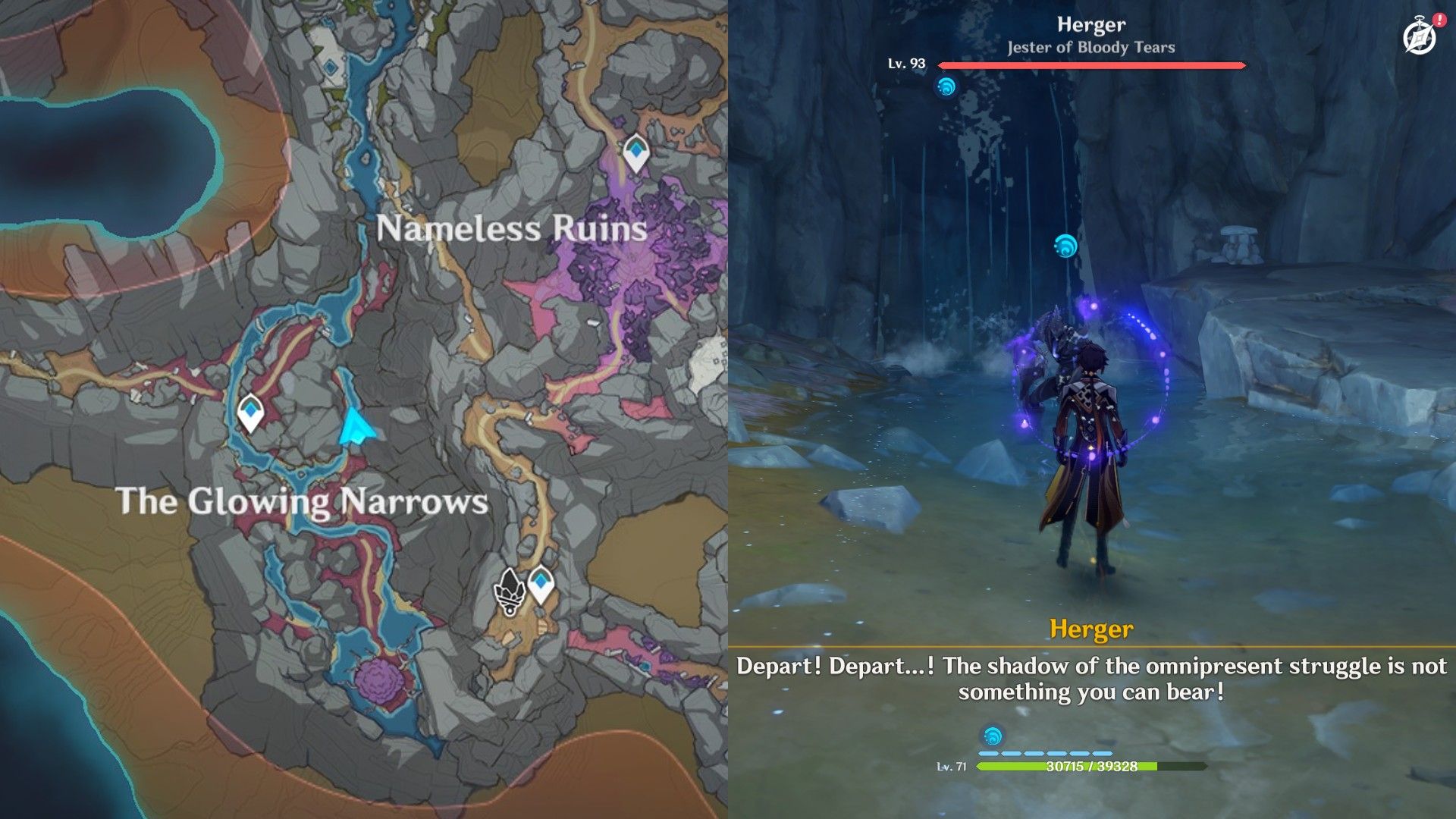 Herger is located pretty close to the Waypoint in the center of The Glowing Narrows. Teleport there, run to the east side of the cavern and look for a cracked wall with an exploding plant in front of it. Blow up this plant and the wall will collapse, revealing a small chamber with Herger inside.

Rethel: Slain Of The Split Bow 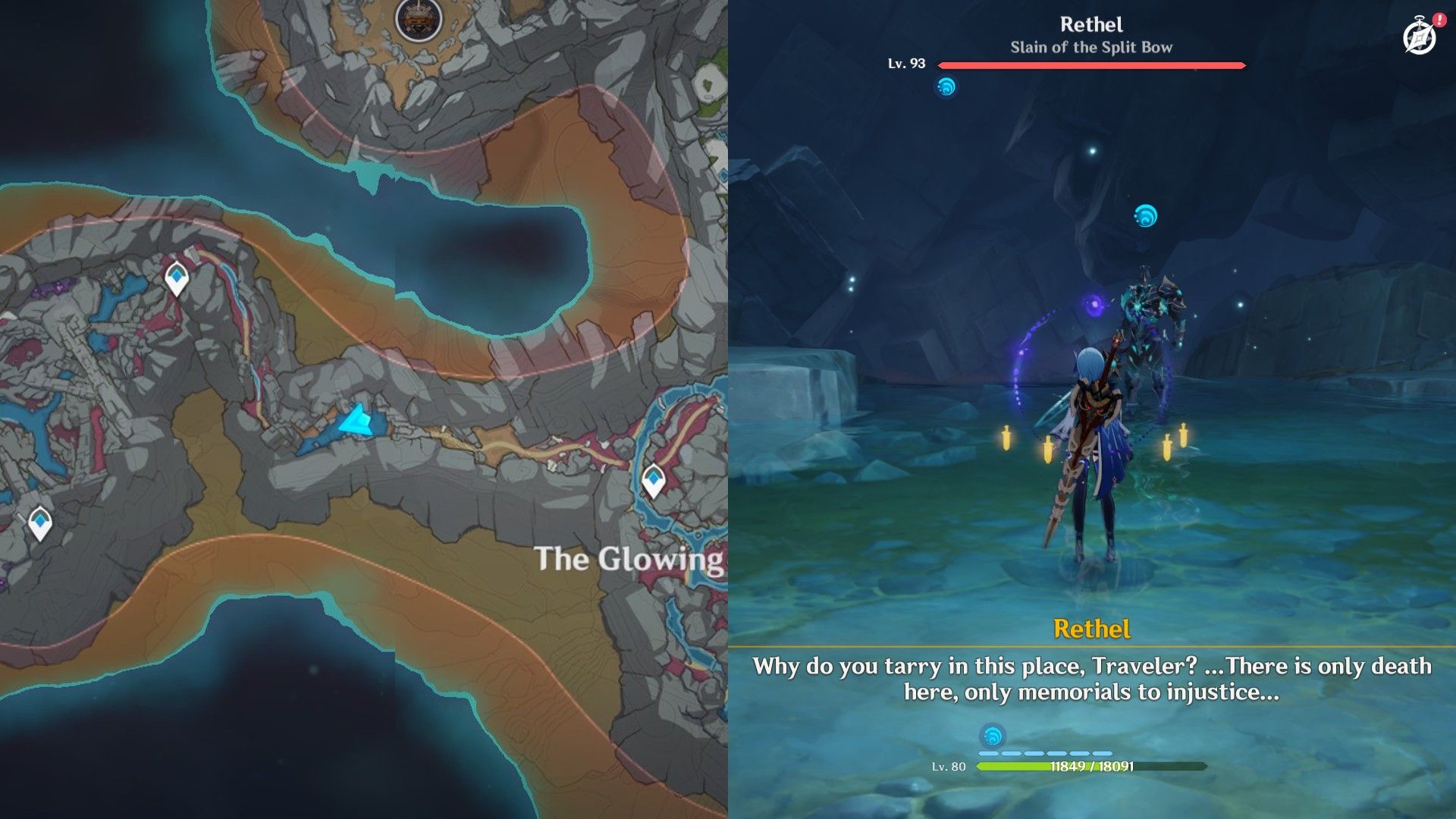 Towards the end of the long tunnel coming from The Glowing Narrows, there will be a steep drop-off with Rethel waiting at the bottom. Hit him with a Plunging Attack on your way down to get the fight started and obtain your final Orb.

How To Use The Orbs Of The Blue Depths 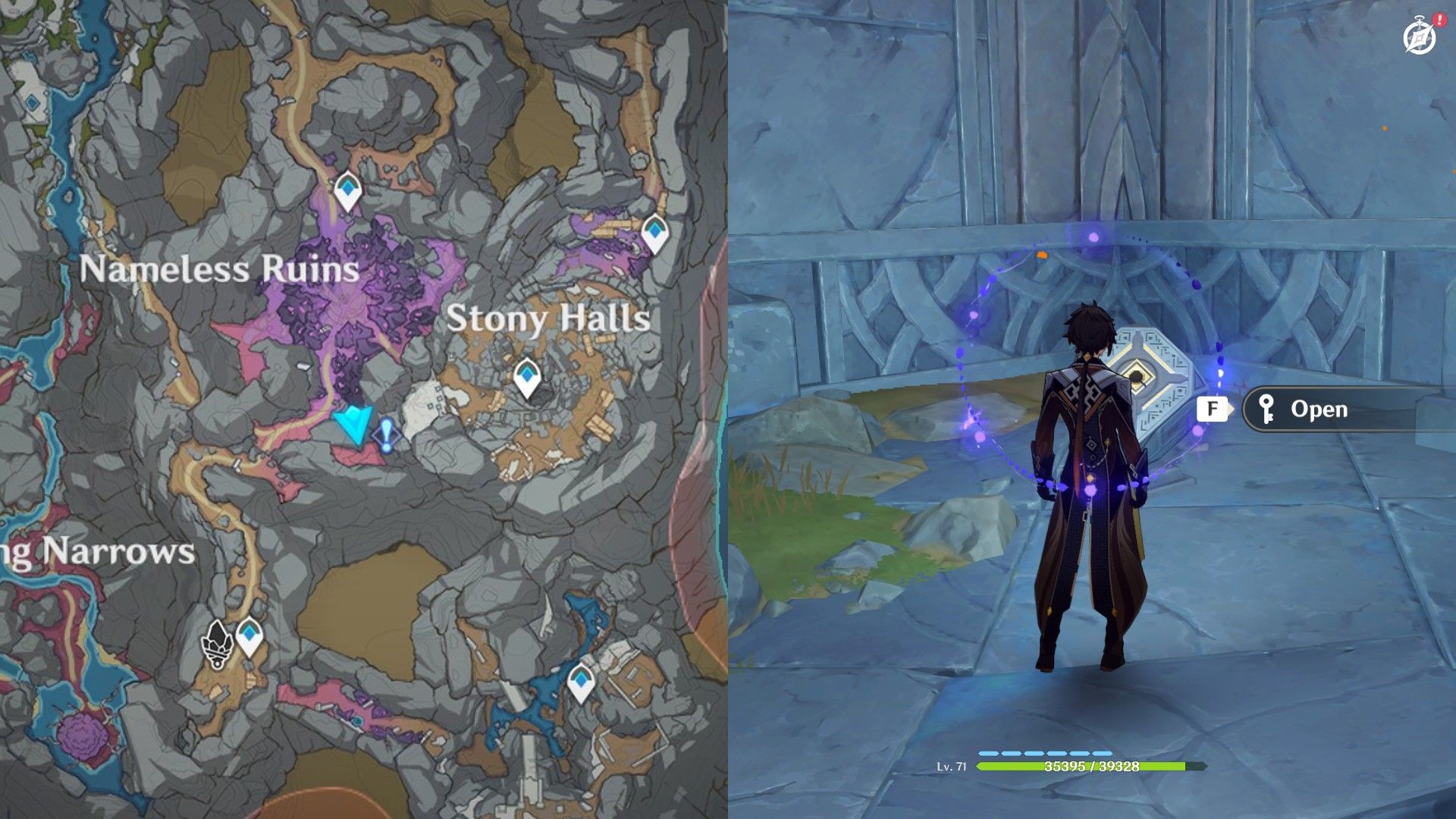 Don't be alarmed if nothing happens when you obtain all nine Orbs. You'll need to take them to a location in the Nameless Ruins to make use of them.

Teleport to the Waypoint inside the Nameless Ruins and move towards the opening on the east side of the room. From there, you'll essentially want to traverse the upside-down ruins and roots until you get to the other side of the area. Be careful not to fall, and keep your eye out for a square mechanism like the one in the picture. Interact with this mechanism to deposit the Orbs of the Blue Depths and a secret room will open. 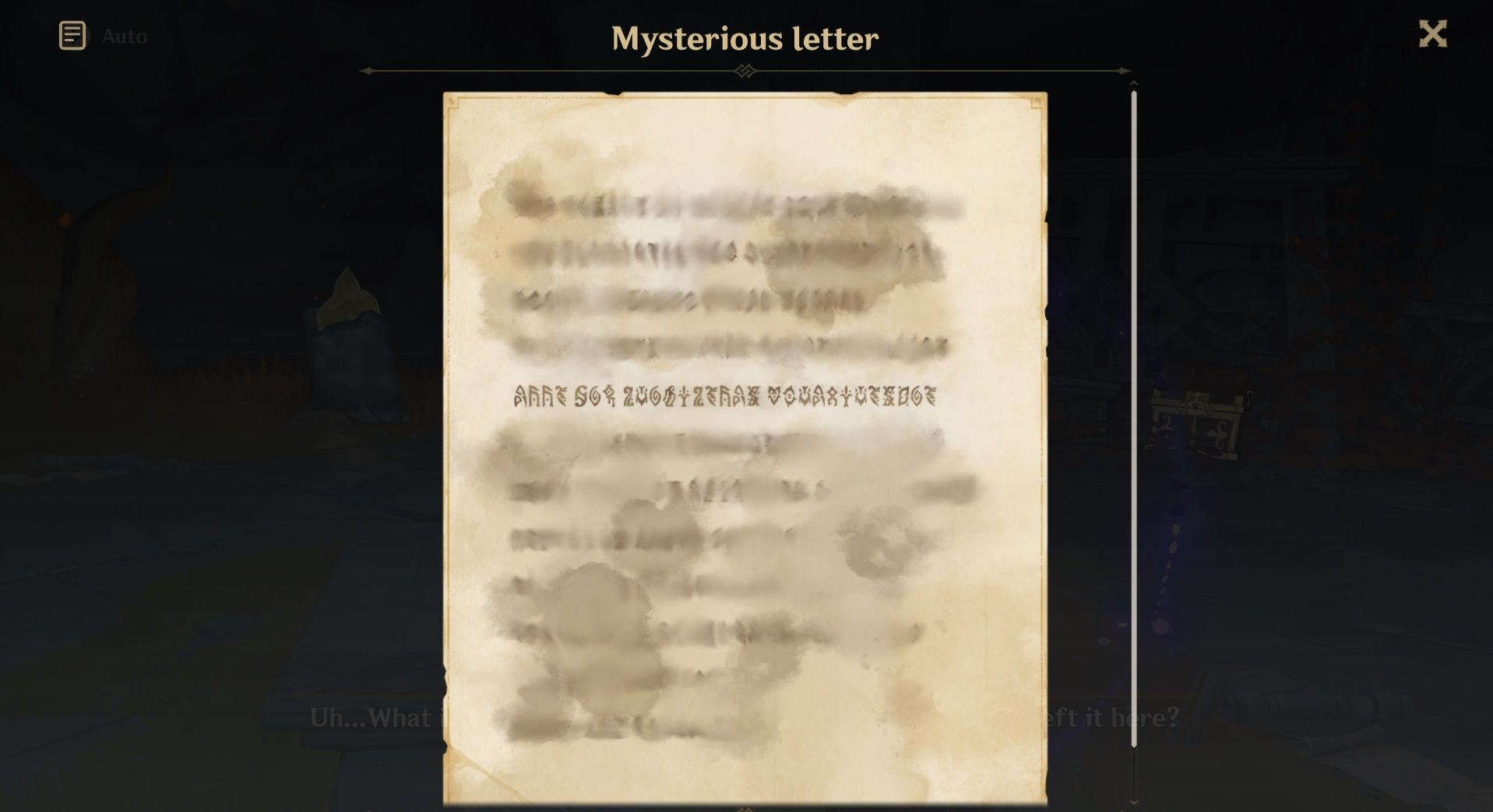 Inside the room, you'll be rewarded with an Exquisite Chest, a Precious Chest, a Luxurious Chest, the "Crede Tenebrae" Achievement, and a Mysterious Letter. The Mysterious Letter will only have one of its 12 lines revealed to you, and unfortunately even this line will be encrypted. SPOILER ALERT: For those curious, the full letter references an ancient Roman poem about searching for a lost friend, likely alluding to Dainsleif and Halfdan.

Once the letter is obtained and the chests are emptied, the "Locked Gate in the Nameless Ruins" Hidden Exploration Objective is complete. 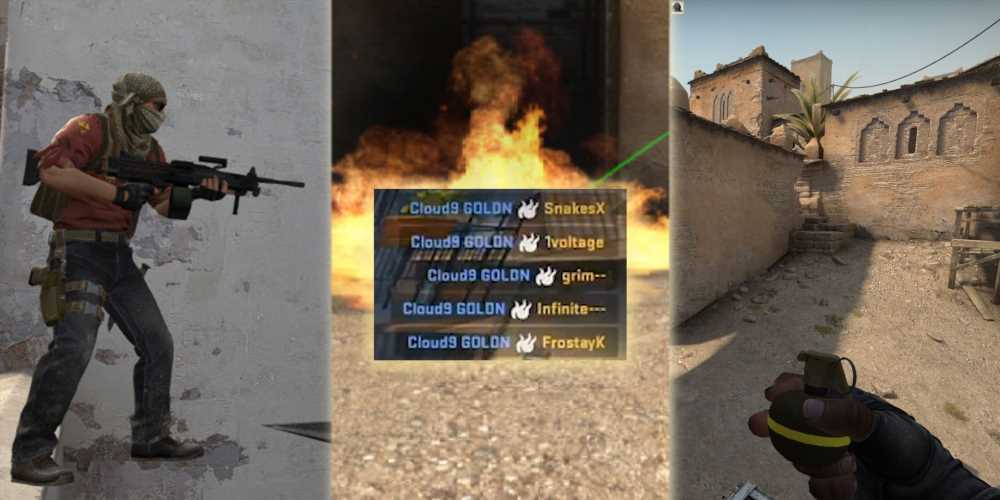