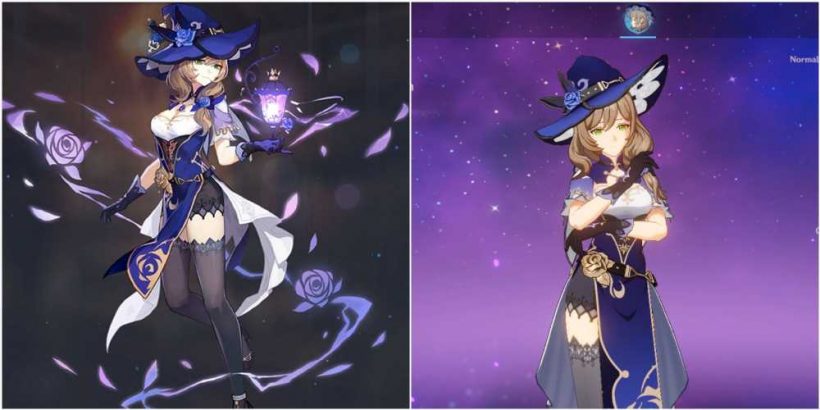 Lisa is one of the free characters that you receive when you start your Genshin Impact journey. She is a librarian for the Knights of Favonius and takes her duties quite seriously. You do not want to be on her bad side, and one way to ensure that is to return those books on time!

She is an Electro Catalyst user who deals AoE damage with her Elemental Skill and her Elemental Burst. She can create very powerful reaction-based team compositions since her Ascension Bonus stat is Elemental Mastery. She is great as an Electro applicator but does fall short in the late game and is overshadowed by other powerful Electro characters. 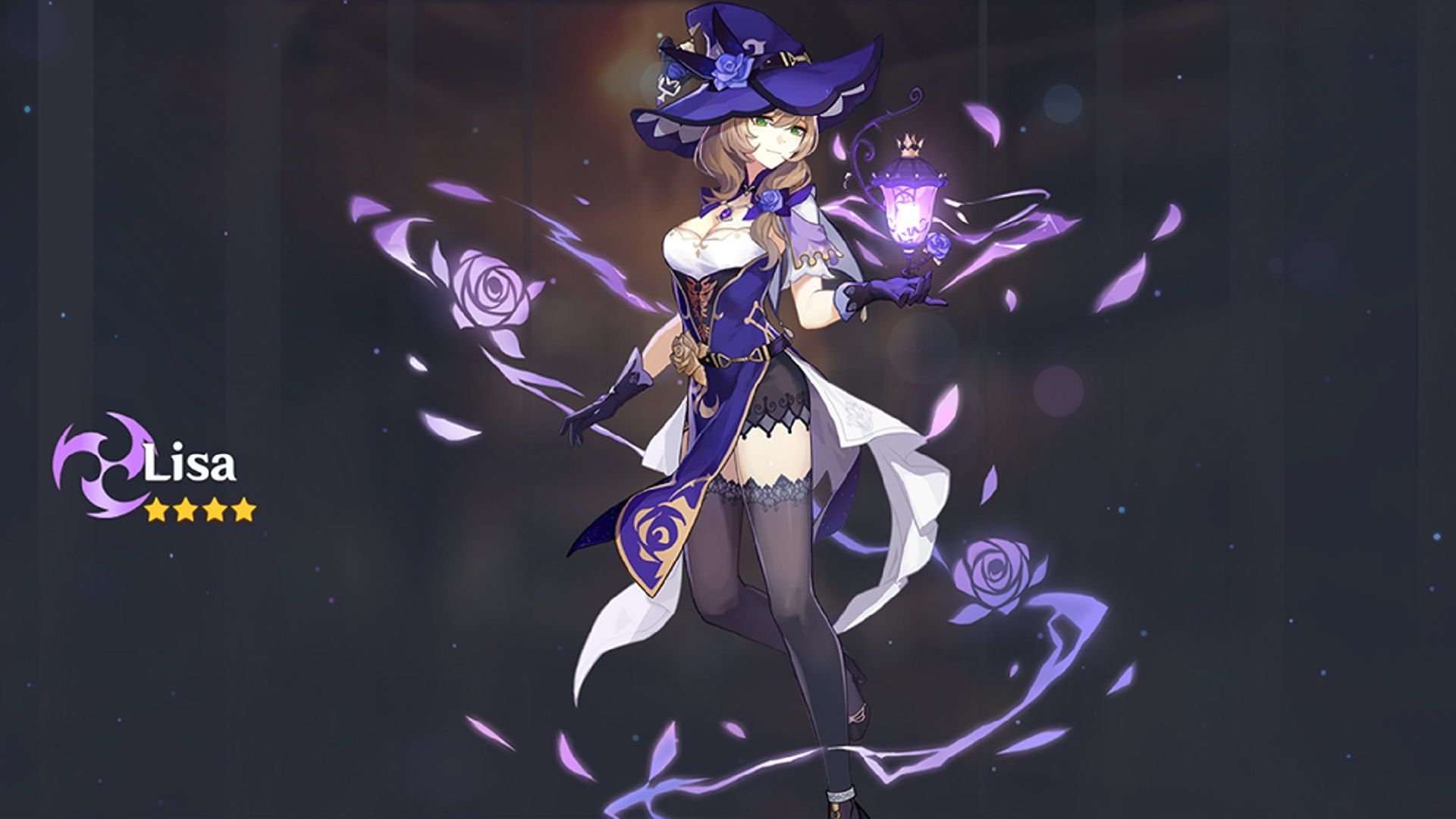 Lisa is an excellent early-game character to build, as she can use her Catalyst to create Electro-based Elemental Reactions, and she fits in with Kaeya and Amber. You can use Kaeya as the main-DPS and trigger Superconduct reactions while in her Elemental Burst.

But be careful while investing in her and only go ahead if you don’t get another Electro character. Since resources are very limited, you might want to save them for other characters. Level her up to level 40, and you can come back to her if you love her playstyle and character design. 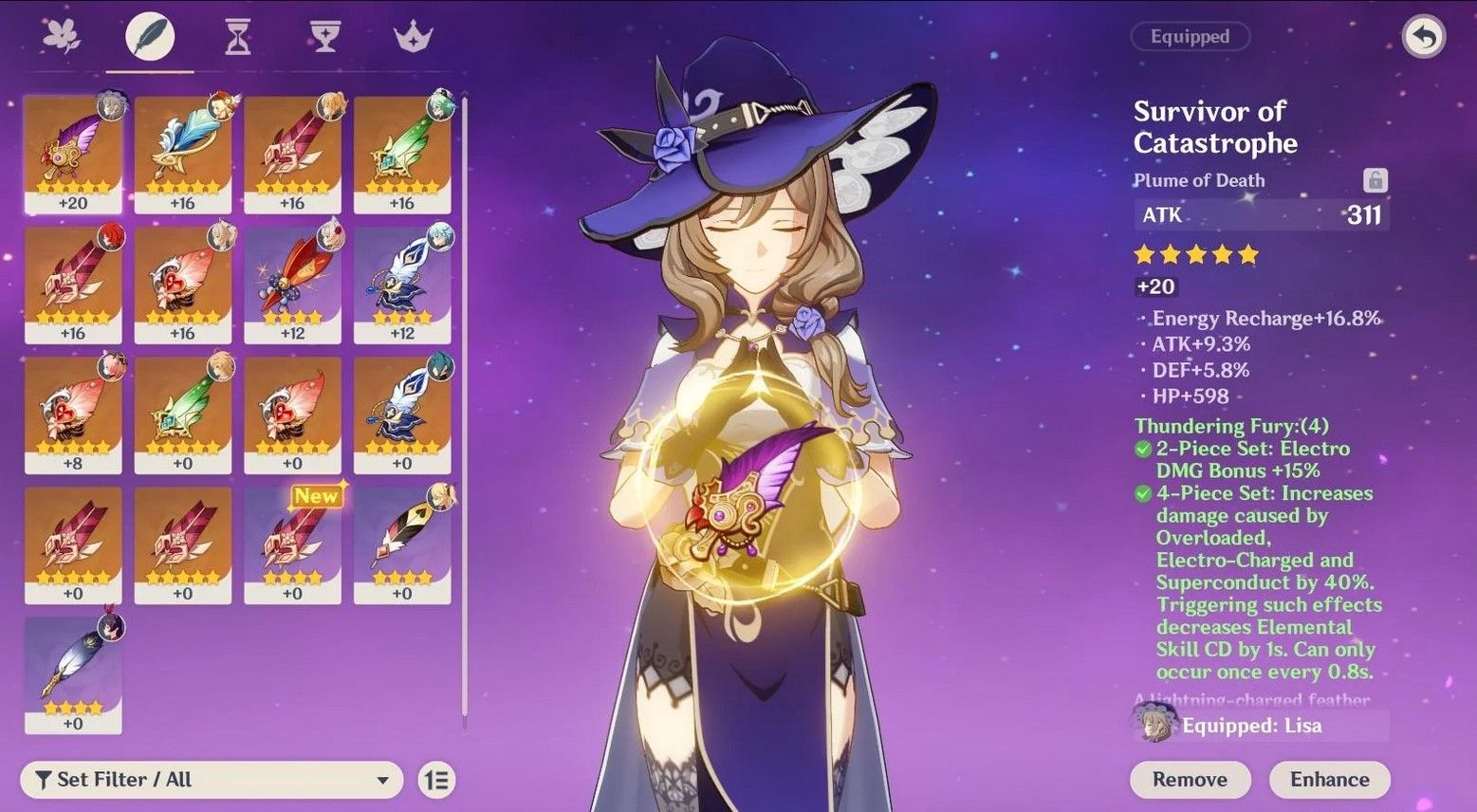 Since she is one of the starter characters, it is very easy to build her. Her attacks are based on her Attack stat, so you can opt for ATK% as the main stat on the Sands and Circlet. You can use an Electro DMG Goblet for some additional damage.

On the other hand, you can use the 2-piece Thundering Fury set for additional 15 percent Electro damage along with the 2-piece Noblesse Oblige set for 20 percent Elemental Burst damage. If you have trouble farming these artifacts, Gladiator’s Finale and The Exile are great substitutes. 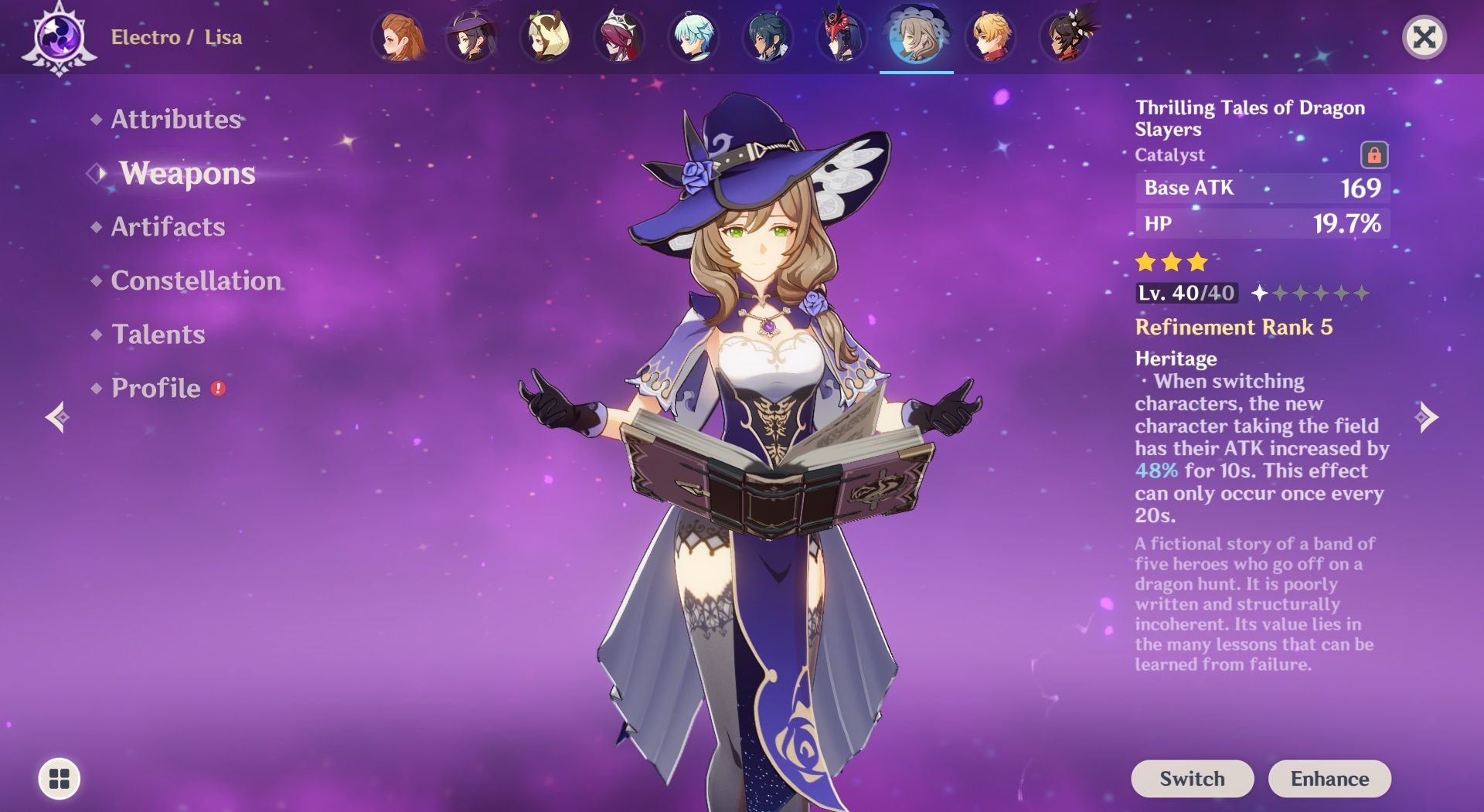 Every Genshin Impact player should have at least one R5 Thrilling Tales of Dragon Slayers. It is a 3-star gacha weapon that can be obtained very easily. It is the perfect weapon for sub-DPS characters like Lisa.

At R5, this weapon can buff the attack of the next character to take the field by a whopping 48 percent. Simply use Lisa’s Elemental Burst and switch to a main-DPS character like Kaeya to dish out a huge amount of damage. 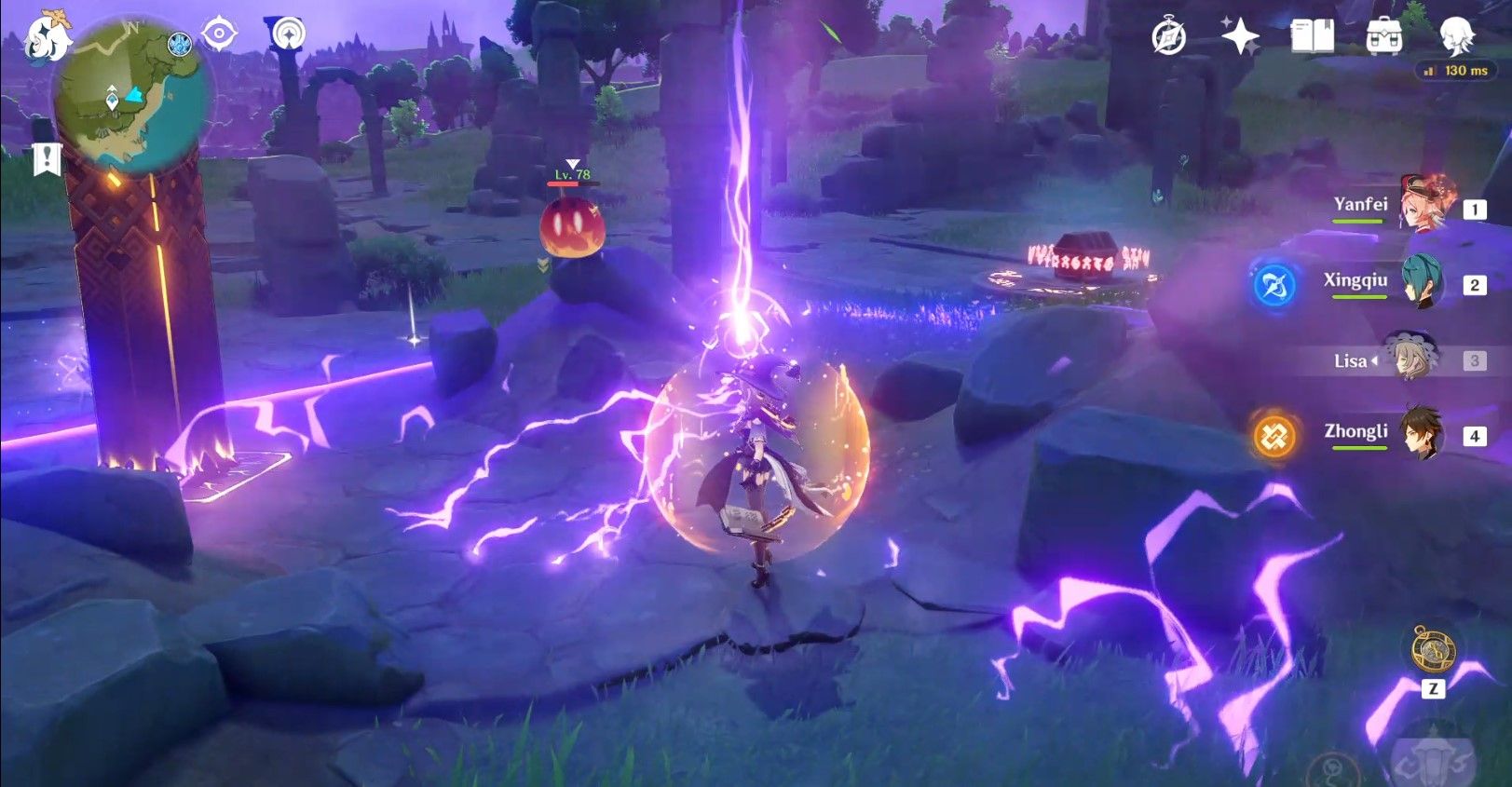 When you use the press version of Lisa’s Elemental Skill, it releases a lightning orb and deals massive AoE Electro damage. Plus, it creates a stack on enemies it hits and can be used in combination with her Charged Attack to deal more damage. When you're up against several enemies, you should prioritize accumulating stacks to boost your damage.

You need to be careful when you are using the hold version of her Elemental Skill as she is pretty vulnerable and any incoming attack can stagger her. The Hold version has similar mechanism but deals more Electro damage. Just make sure you have a shield. 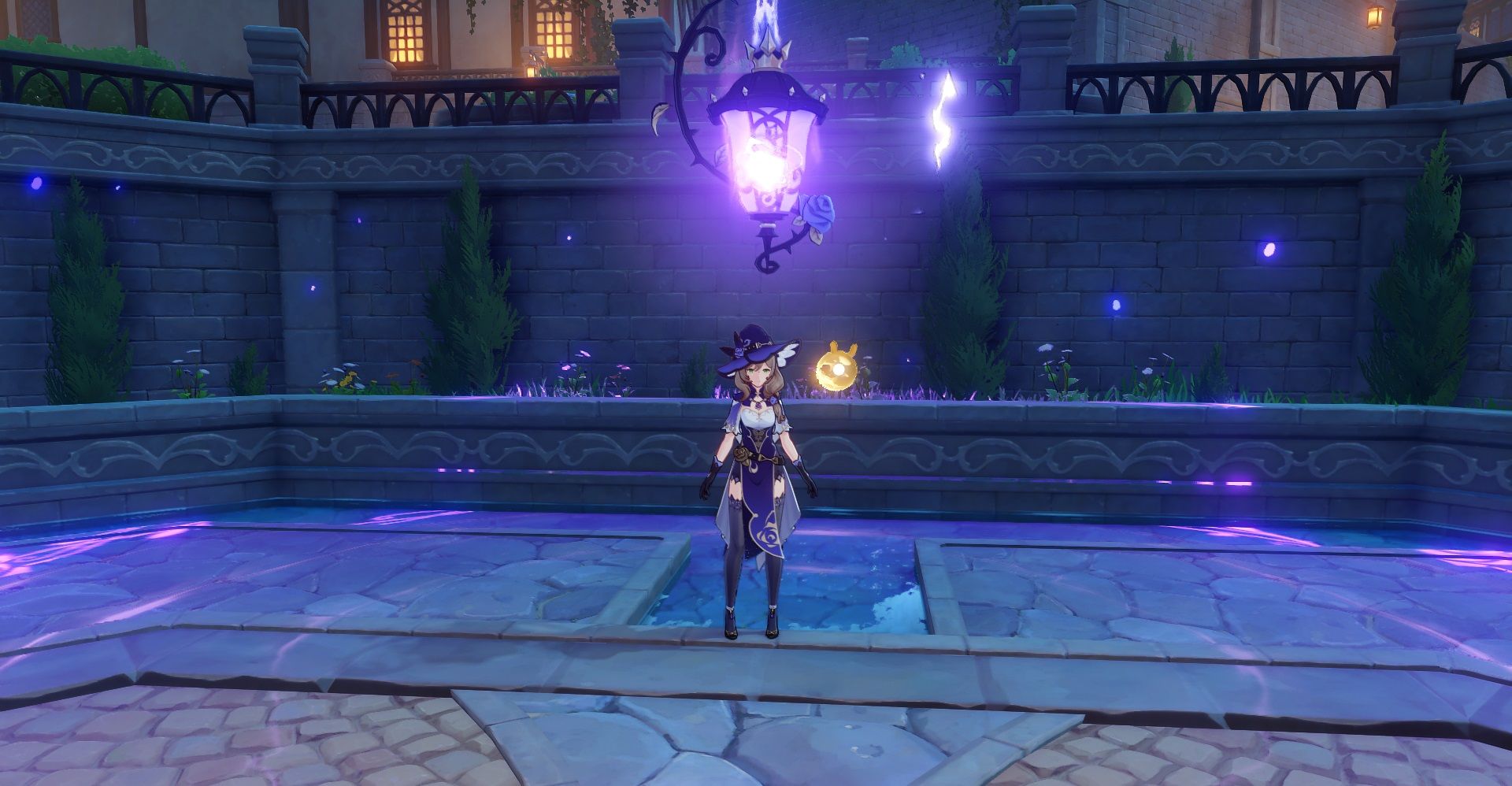 Lisa's Elemental Burst creates a Lightning Rose, which fires powerful lightning bolts at nearby enemies, causing Electro DMG. The Burst not only deals Electro damage, but it also pushes enemies back. You can use this to make space for yourself if you need some buffer time.

Lisa's Burst will zap an attacker to apply Electro to them as long as it is active. Because it is an on-field ability, you can get the most out of it by switching to a Hydro or Pyro character to trigger Elemental Reactions. 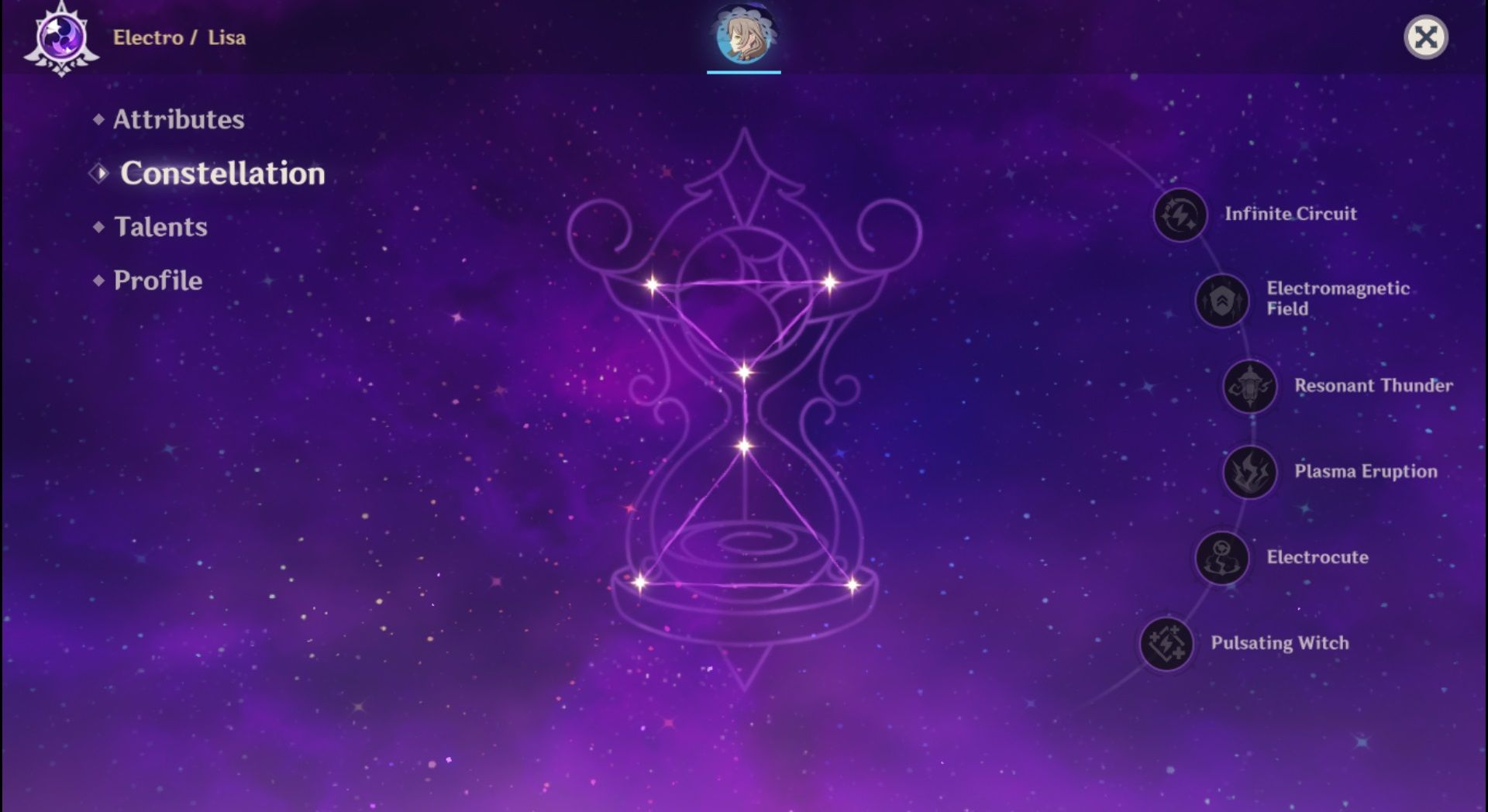 Getting constellations for Lisa is very difficult. She does not feature in any of the Event banners and doesn’t get an increased drop rate. The only way to get constellations is through the standard banner and through the shop using 34 Masterless Starglitter.

If you like Lisa’s design and playstyle, you can go for constellations to further improve her damage potential. C4 is considered to be a good stopping point as it increases the number of lightning bolts released by her Elemental Burst by 1-3. 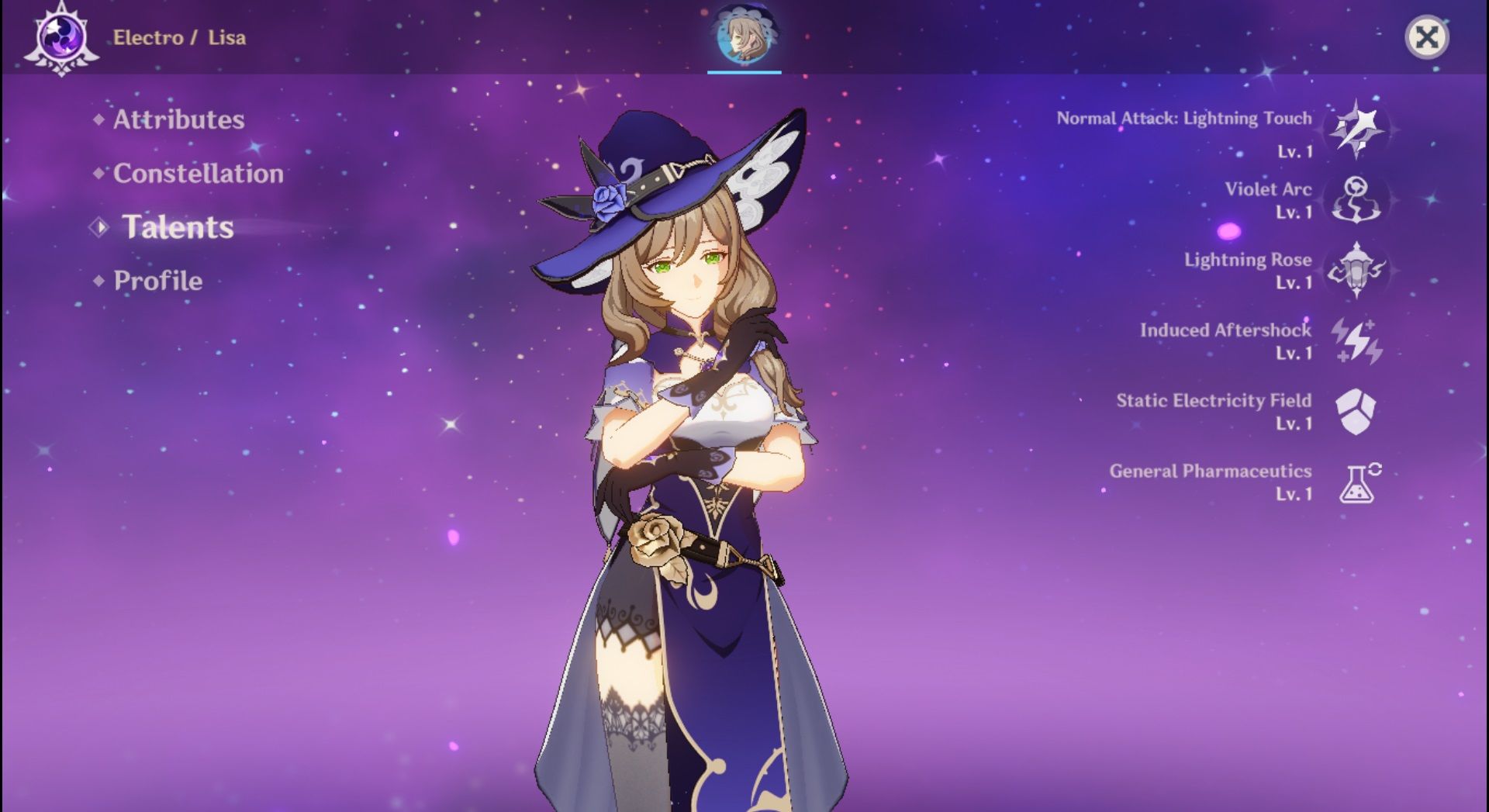 While her base stats are sub-par, she makes up for it with her Passive Talents. This clever witch knows her way around the crafting table and has a 20 percent chance to refund the materials used while crafting a potion. Potions are used to buff your Elemental damage and increase your resistance to certain Elements.

With her first Ascension passive unlocked, you will be able to apply Violet Arcs’s conductive status to enemies using her charged attack. This makes stacking damage a lot easier! And as an added bonus, her fourth Ascension passive decreases enemies’ defense by 15 percent when they are hit by Lightening Rose.

Lisa will be the sub-DPS and Kaeya will be the damage dealer. With the combination of their Elemental Bursts, they can trigger Superconduct reactions and deal huge amounts of physical damage.

Barbara will be the resident healer keeping your party healthy while Noelle can use her shields to protect the squishy characters. An Anemo character like Sucrose can be used to pull enemies together and benefit from the Viridescent Venerer set.