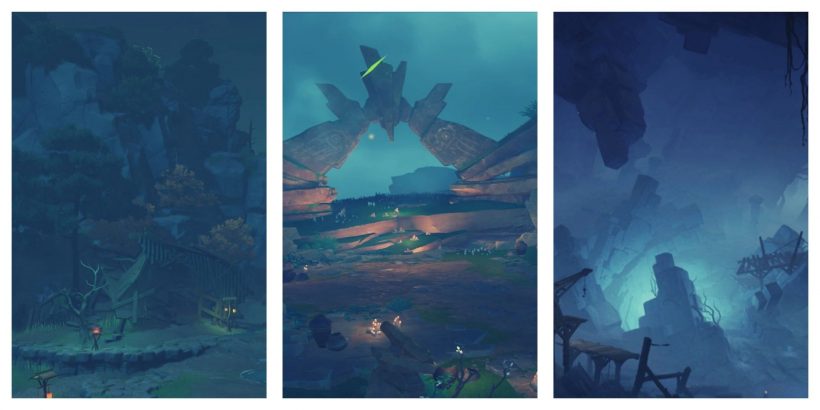 Genshin Impact isn't the first thing that comes to mind when you read the word "horror" (although losing the 50/50 is arguably a horror genre of its own), but Teyvat surprisingly has spooky places you should definitely visit on a Halloween night. Ranging from tragic to outright haunted, the lore behind these locations can easily send shivers down your spine.

Traveler beware: these places are not for the faint of heart. 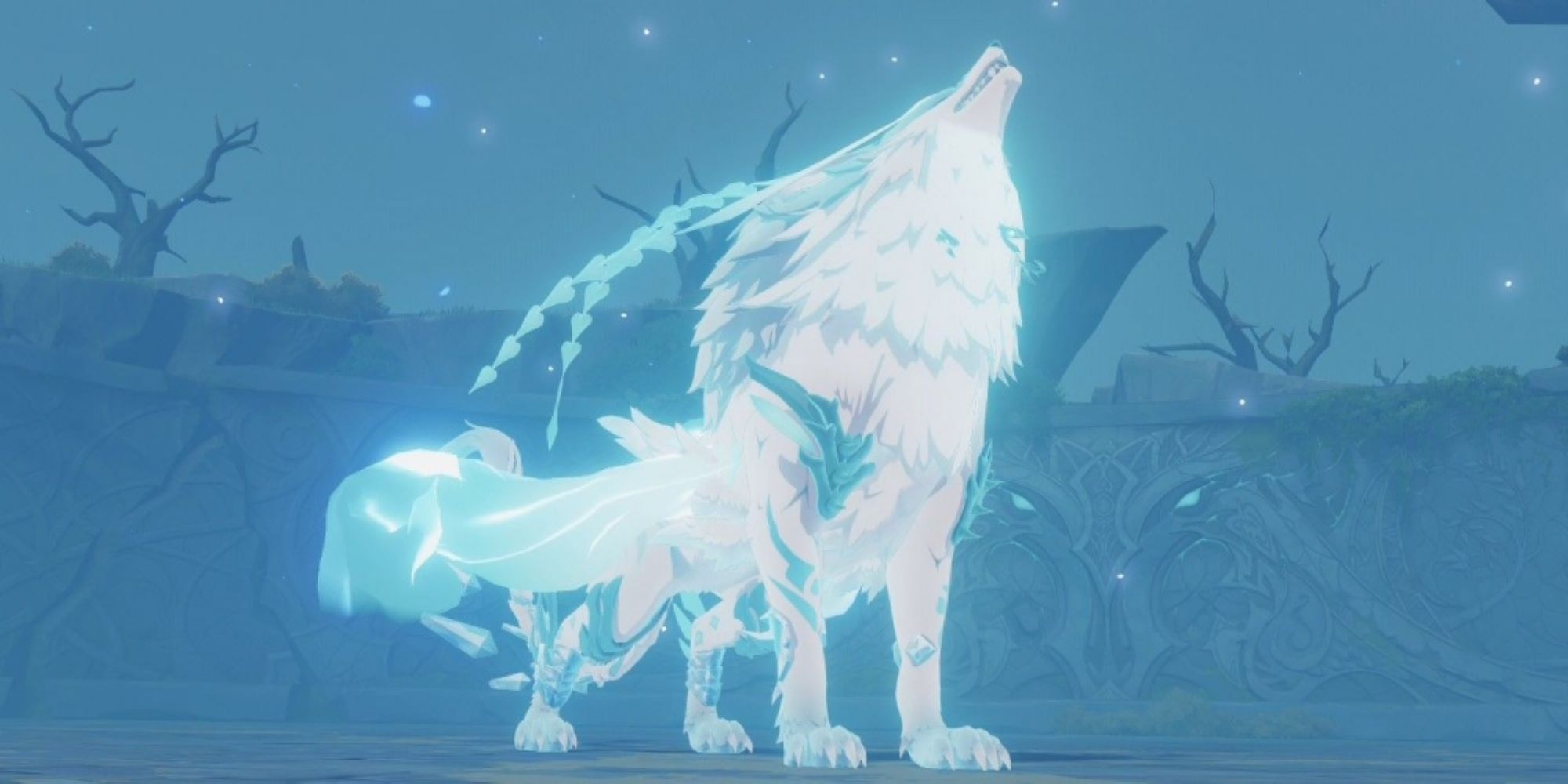 You might be thinking that this place isn't haunted and that you haven't seen any ghosts in this place at all. But right in the center of weekly boss fights in Wolvendom is Lupus Boreas, who is technically a ghost. Lupus Boreas, or better known as Andrius, let his physical body die during the archon war after realizing that his frost could not sustain life.

Contrary to the popular belief that ghosts have to be scary and vengeful, Andrius is actually dubbed as one of the Four Winds of Monstadt, making him a harmless and even benevolent spirit. For those of you who didn't know yet that you've been fighting a ghost this all time, now you do. 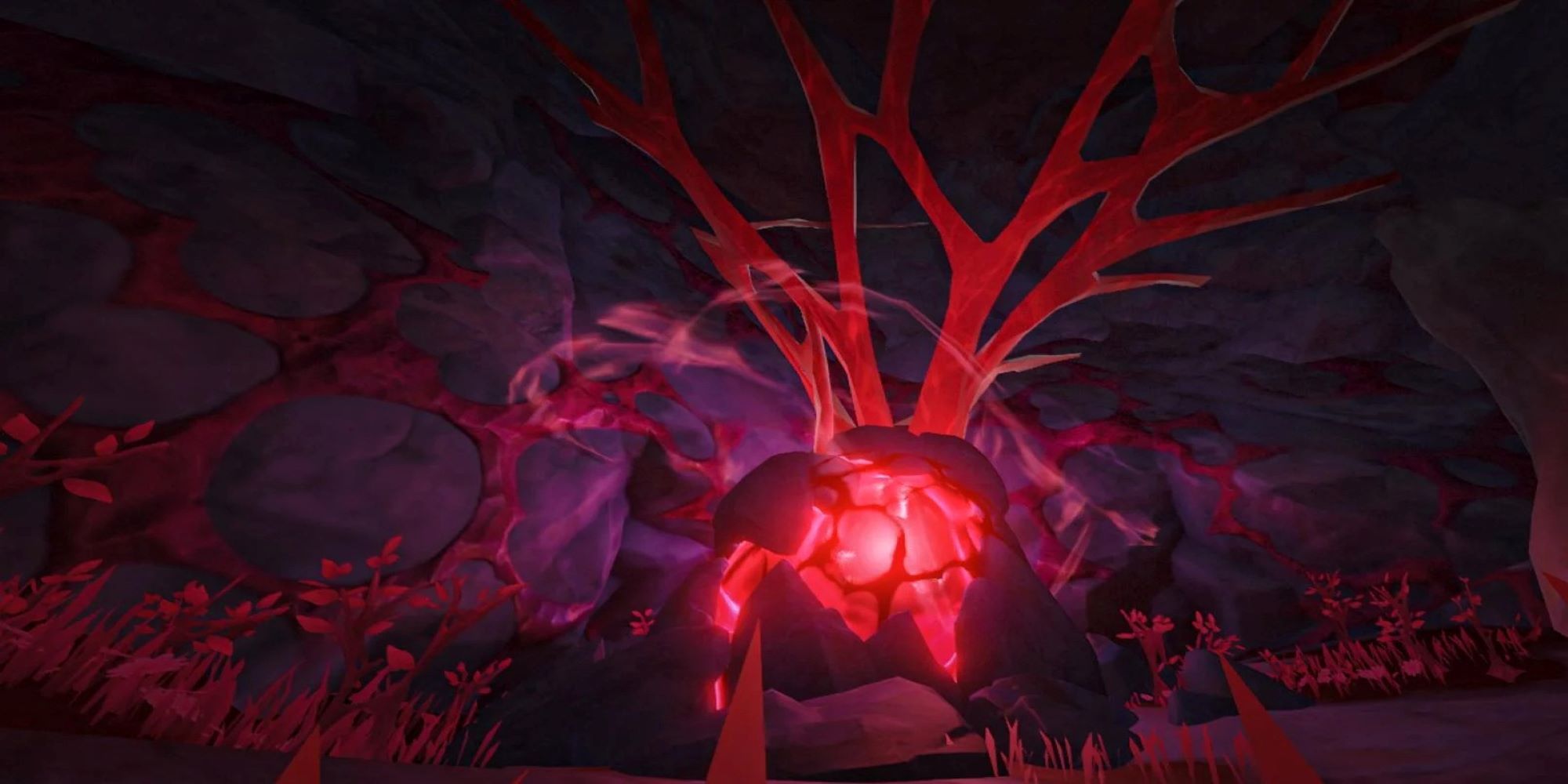 In the middle of the skeletal remains of what appears to be a dragon is a large, pulsing heart. Theory crafters believe it to be Durin's heart, the corrupted dragon that was slain by Dvalin. The site is littered with what appears to be dragon teeth, and above all of this is a ribcage.

When you come close to the heart, you will hear it beat louder and louder. It almost makes you think you're inside a living dragon. 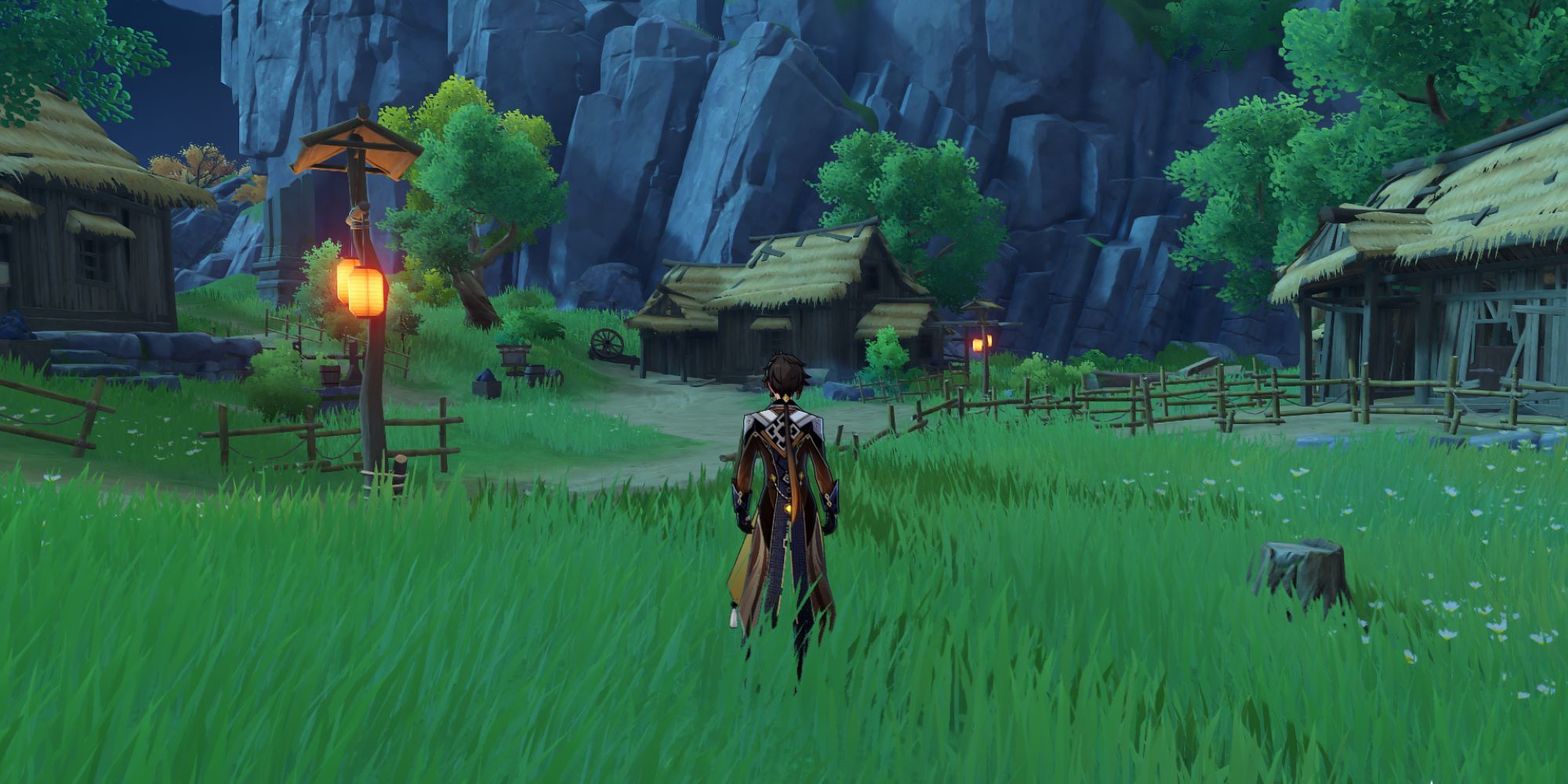 The Tree That Stands Alone world quest will make you look for a dead man's lost will. When you unlock the quest, you will discover that there are restless ghosts who are also looking for their father's lost will in order to keep the treasure to themselves. Finish this quest in order to help these ghosts cross over, and no good deed goes unrewarded. You get a precious chest just by completing this quest and shrine depth key.

Talk about a grave robbery, but hey, you're just doing your best to help. 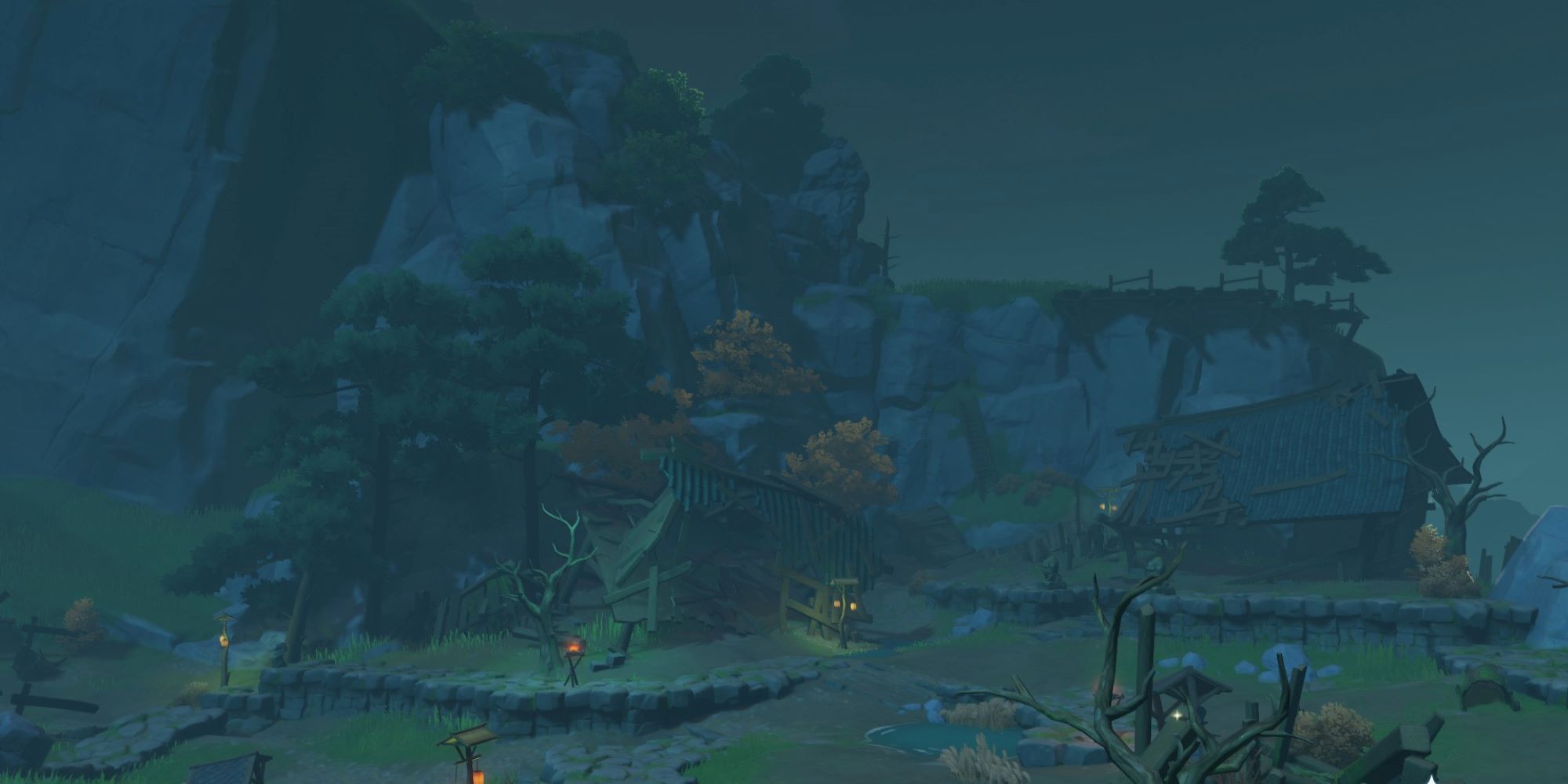 You don't need to complete HuTao's story quest in order for you to understand that this place is just downright creepy. The cherry on top would be HuTao singing "silly-churl, billy-churl, silly-billy hilichurl" in the background – Wuwang Hill also features blue shades floating around (almost like spirit orbs). Although you can't interact with these shades, it doesn't make the place any less creepy.

Once you do HuTao's story quest, you will discover that Wuwang Hill contains the border between life and death, where spirits with regrets reside. If that's not scary enough for your tastes, you will encounter a girl who commissions you to look for her lost book, only to disappear once you find the said book. 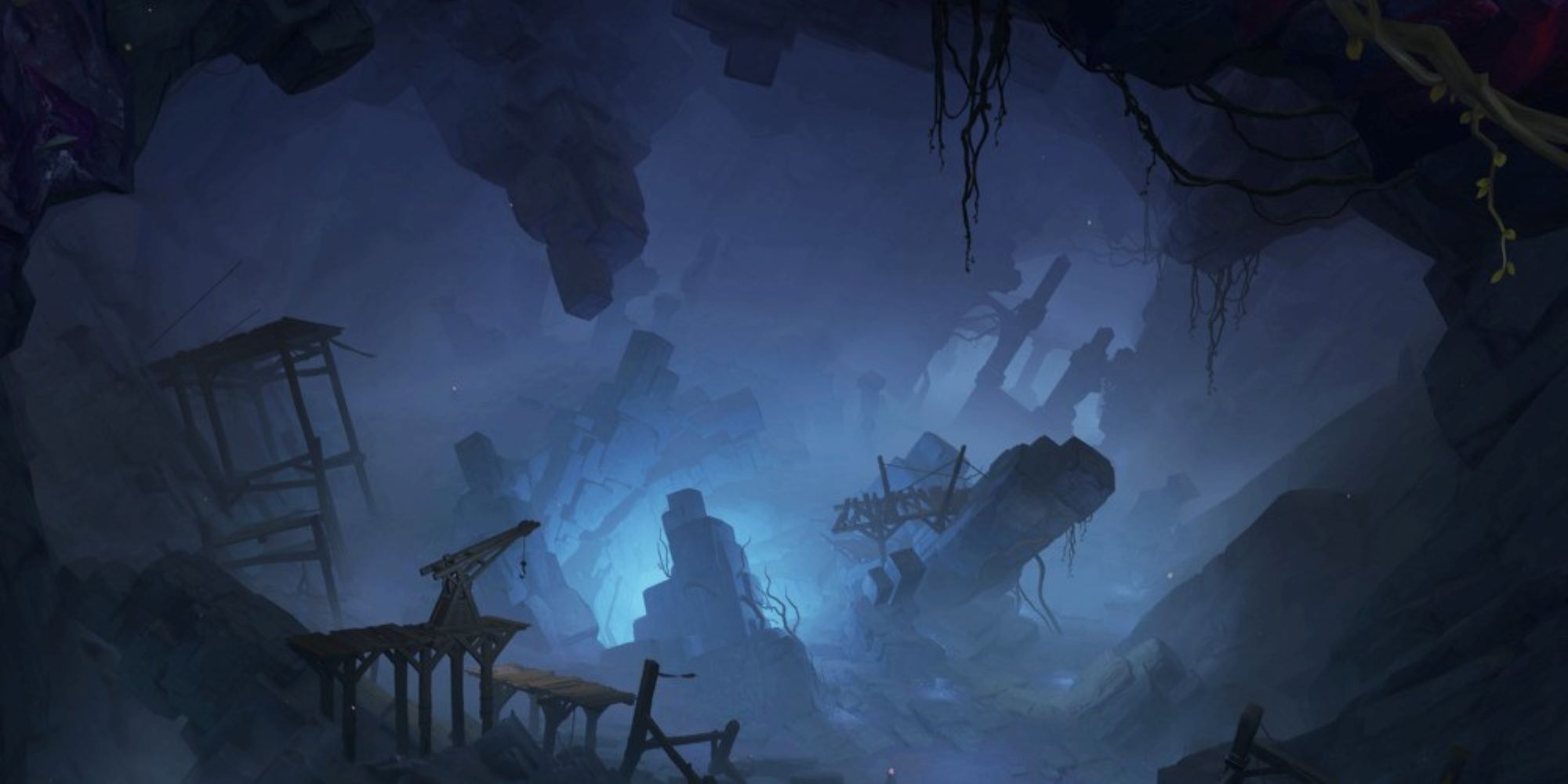 Are you scared of the dark? Do you have claustrophobia? Maybe you don't like high places? If your answer is all of the above, then The Chasm's design is sure to give you a fright. The Chasm features a dark and dingy atmosphere and long winding vertical tunnels that, with one misstep, can lead you to a death drop.

Liyue's haunted locations have a penchant for little girls who disappear without a trace. In The Chasm's Bounty world quest, a miner named Qi Ding will ask you to look for his daughter's lost doll. You will suspiciously find his young daughter in The Chasm as well. Or is it his daughter? 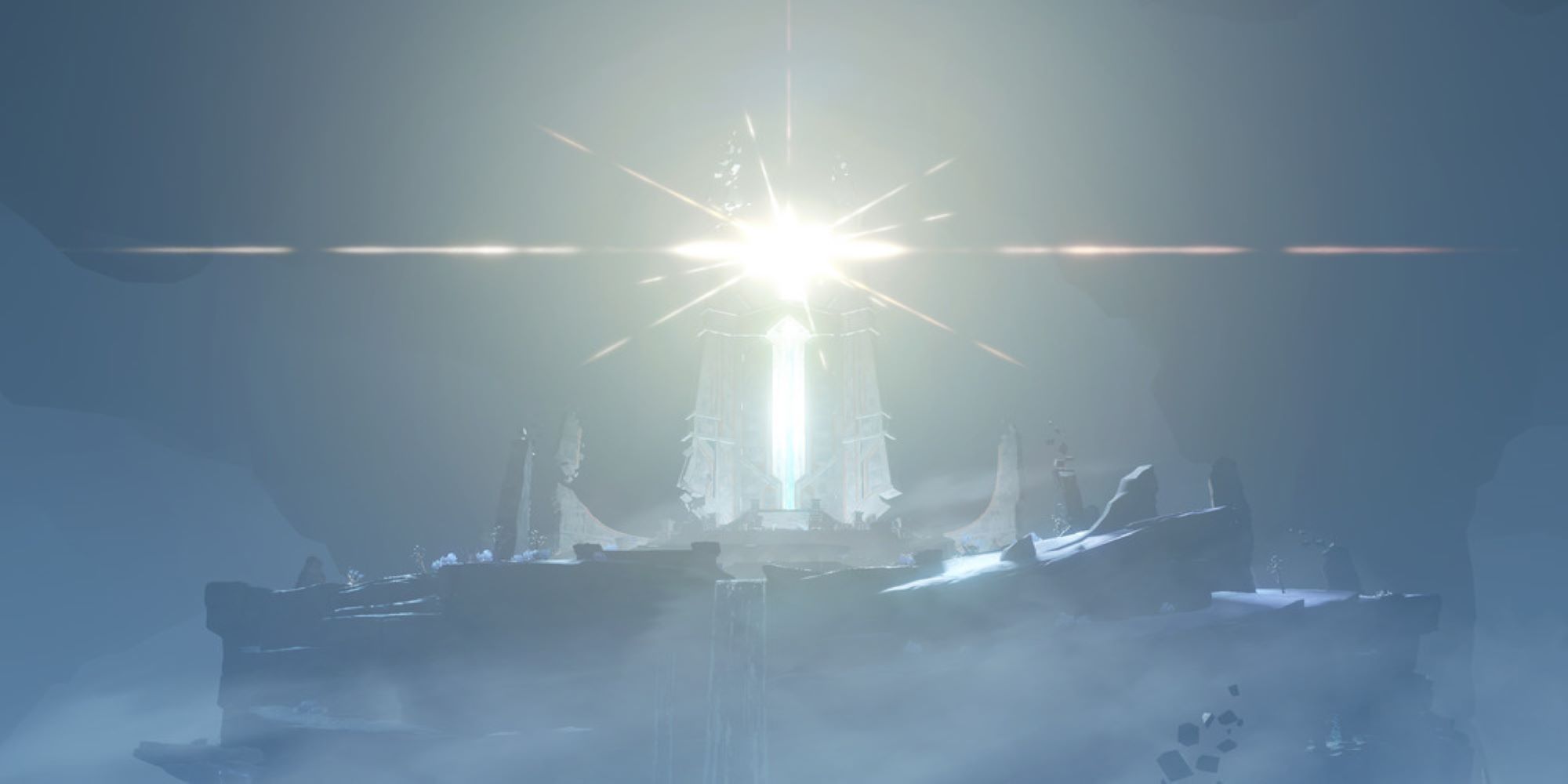 Enkanomiya is an enchanting sight to explore, but it's undeniably haunted. You should expect this place to be part of this list, as it is a civilization lost to time that co-existed with Khaenriah.

World quests within that area are activated by talking to "shades" or afterimages of people who perished in Enkanomiya. Many of them have not moved on and think that they're still very much alive. Needless to say, these shades are not malevolent, and doing quests for these shades is often rewarding. 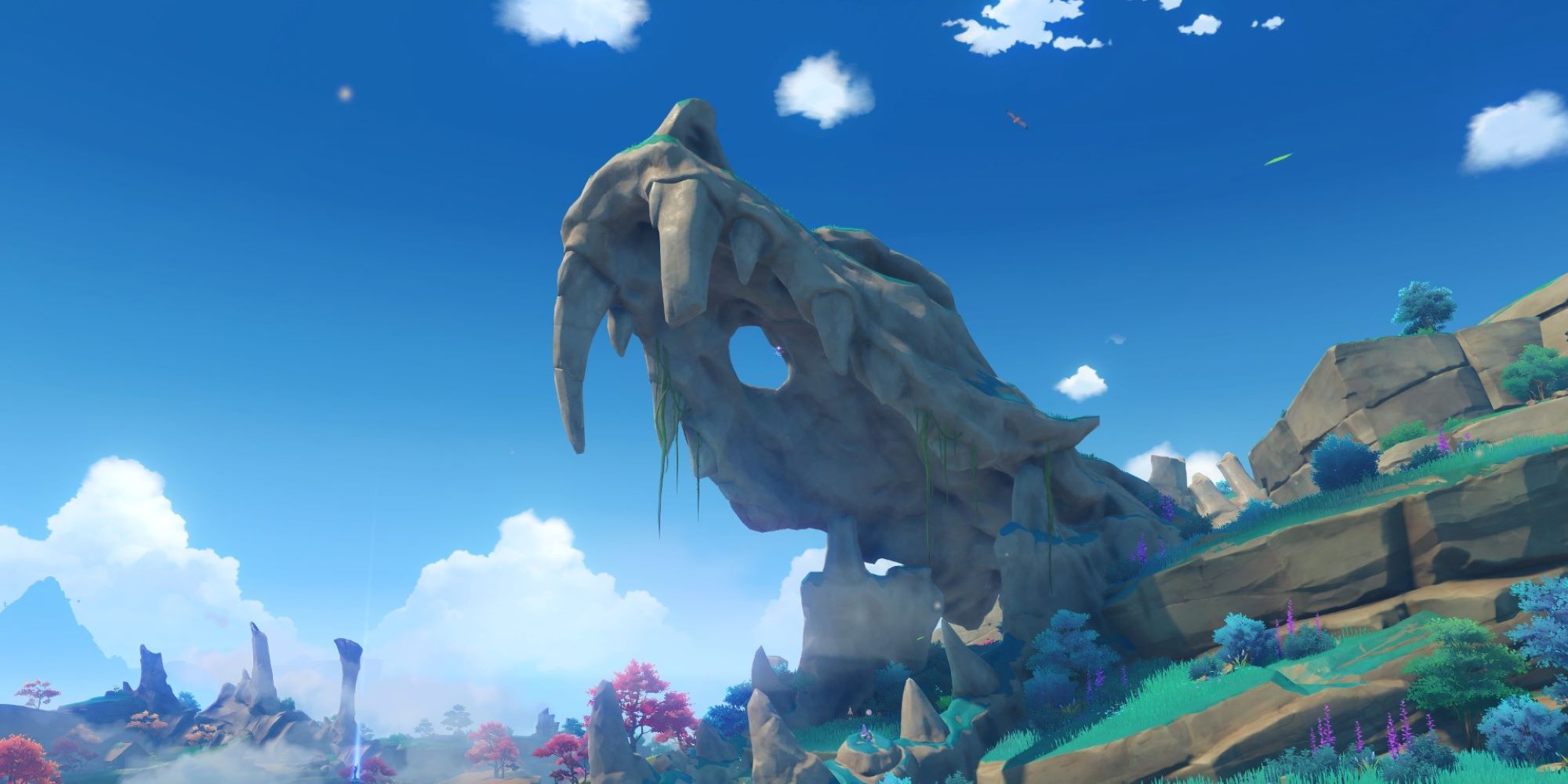 First of Ei's victims is Orobashi, the serpent god of Watatsumi Island. The people of Enkanomiya were starving, and Orobashi was left with no other choice but to seize Yashiori Island for its resources. Ei retaliated by taking Yashiori Island back and slaying Orobashi for the invasion with her signature Musou no Hitotachi.

Countless lives were taken during this war, and Orobashi's remains left the curse of the tatarigami behind. This curse is the reason for the perpetual storming in Yashiori Island, and it is also the cause of illness, insanity, and plagues that occur within the island. Yashiori Island might not have ghosts wandering around, but the residual wrath of an ancient god lying around makes this island deserve a higher spot in this list. 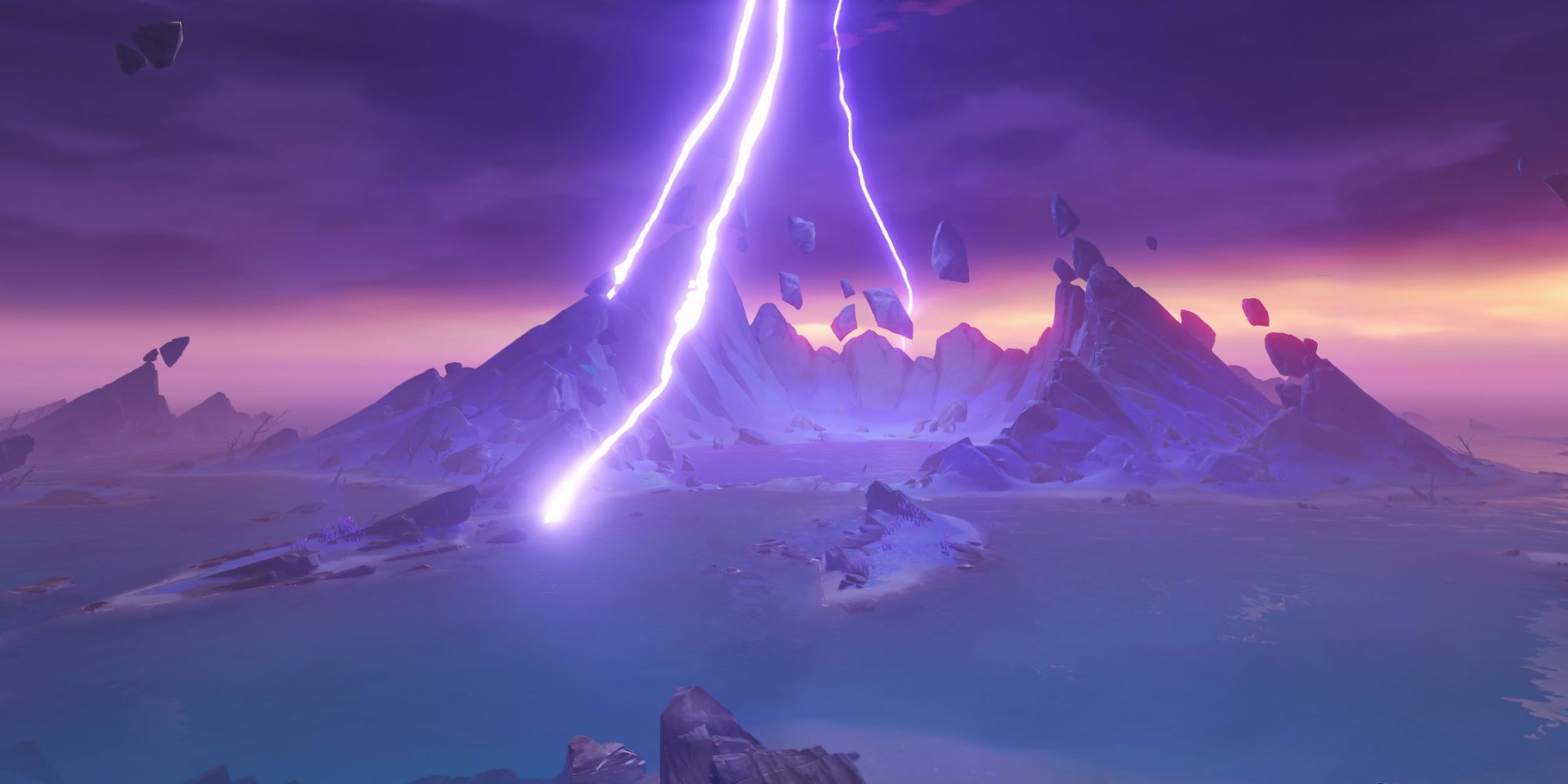 Another one of Ei's victims is Kapatcir (better known as the Thunderbird Manifestation you most likely fought to ascend Raiden Shogun herself). The Thunderbird's powerful remains were sealed on Seirai Island after it was slain by the Musou no Hitotachi.

A century later, the Thunderbird's residual powers were unsealed during the war between Orobashi and Ei, which formed the Thunderbird Manifestation, which swept fleets off to distant shores. Like Orobashi, the Thunderbird left devastating consequences on the island it was slain at. Present at Amakumo Peak is a never-ending Thunderstorm and electro-infused water. Lesson learned: never kill gods, or your island will be cursed. 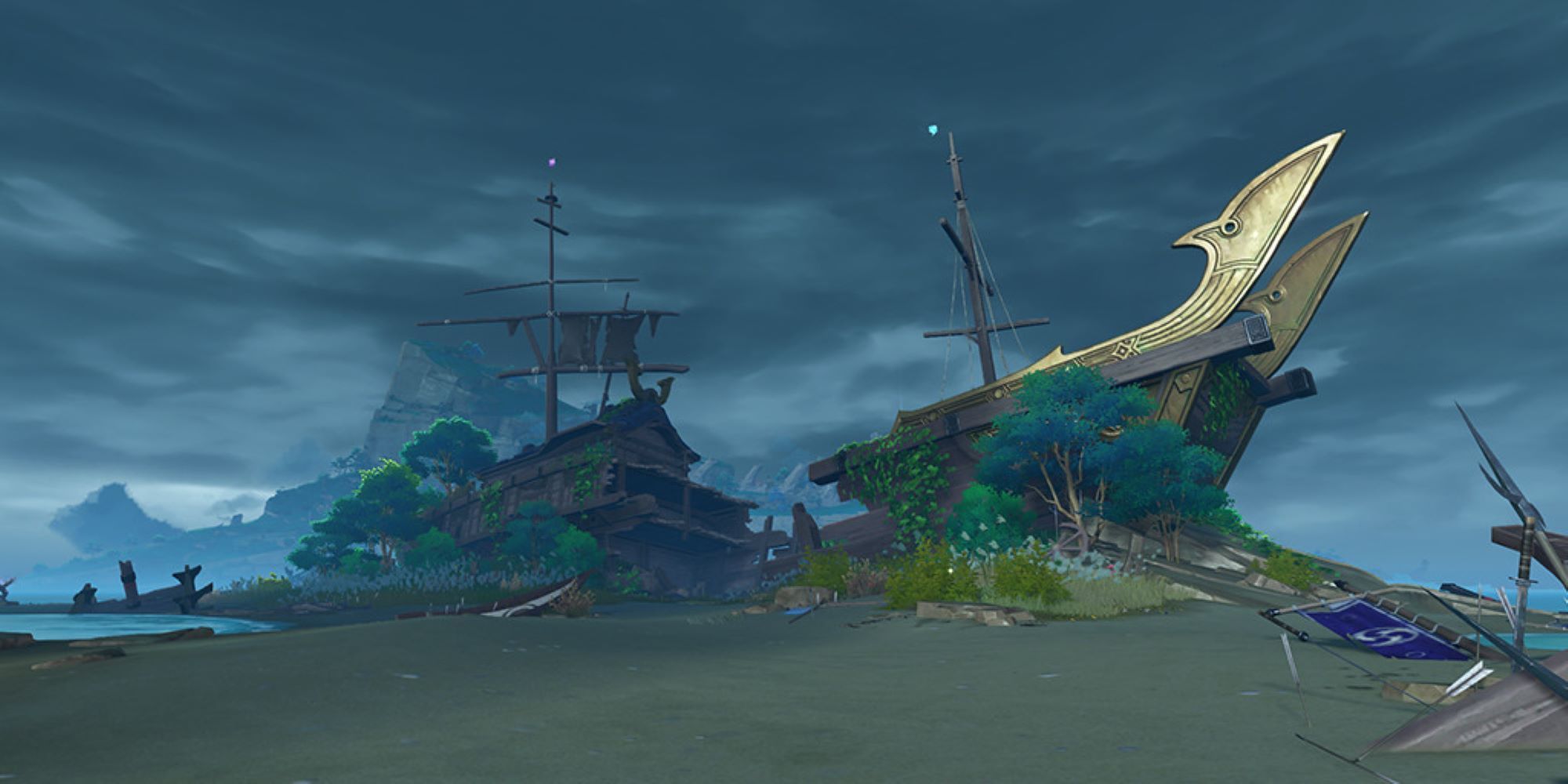 Though serene when explored compared to Seirai Island and Yashiori Island, where the chances of getting hit by lightning are higher than getting your next exclusive five-star character, Nazuchi Beach is historically a site for wars. It is where Watatsumi forces and the Tenryou troops recently clashed due to the Vision Hunt Decree.

But even further back, it was implied to be a place where conflicts occurred. The sight of Dendrobiums flourishing on this island are proof of these wars, because these flowers only grow where blood had been shed. 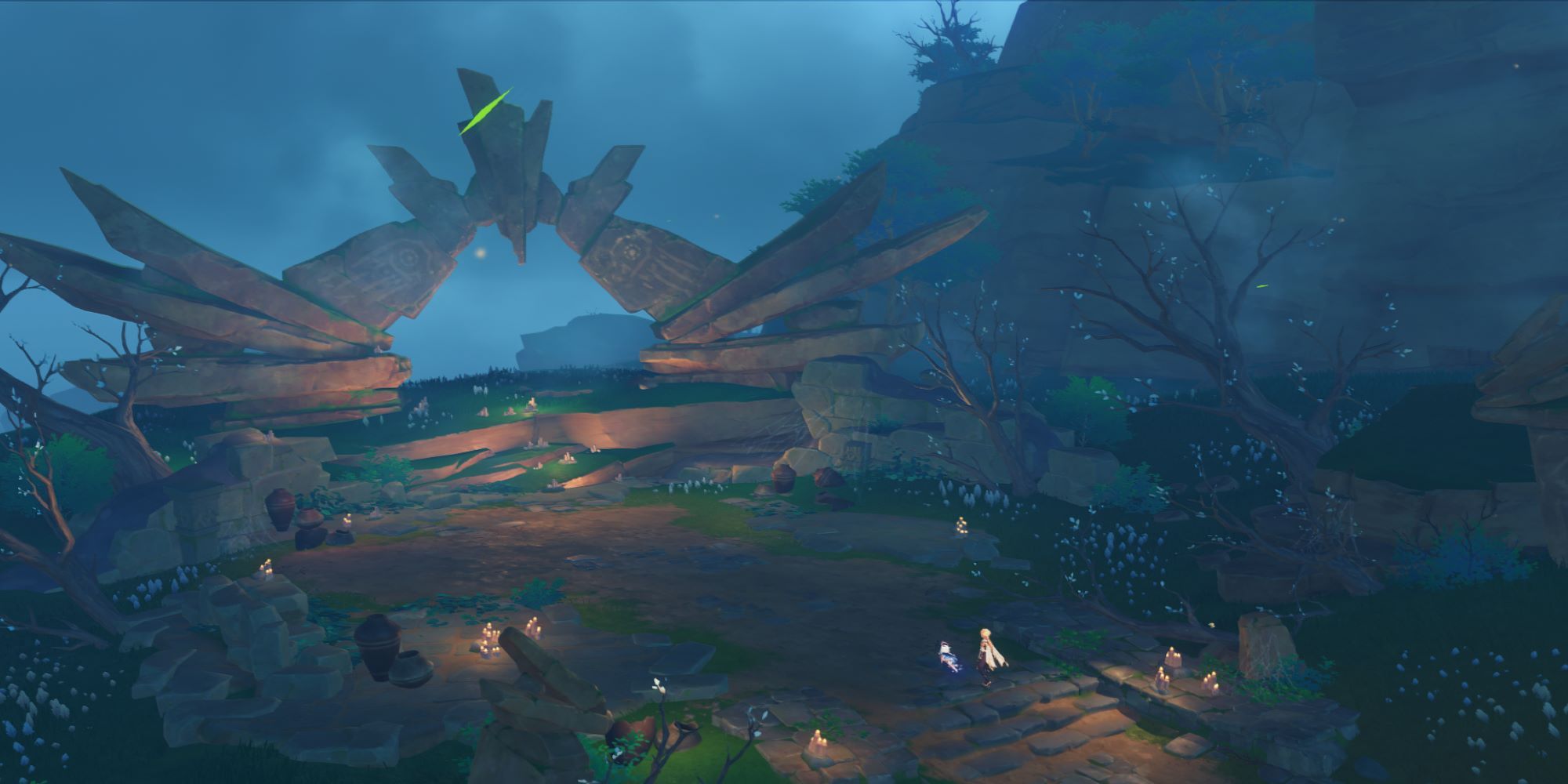 Tsurumi Island fits the bill of the most haunted island in Teyvat: it was cursed by a god, inhabited by ghosts, and was subject to repeat its destruction in a horrible time loop. Not to mention, the place is covered in thick fog the first time you set foot in it. If you think everything up to this point is horror material, it gets even worse. A child was sacrificed on this island, and his blood was found on a chalice. In rage, the Thunderbird wreaked havoc on Tsurumi Island for the killing of this innocent child.