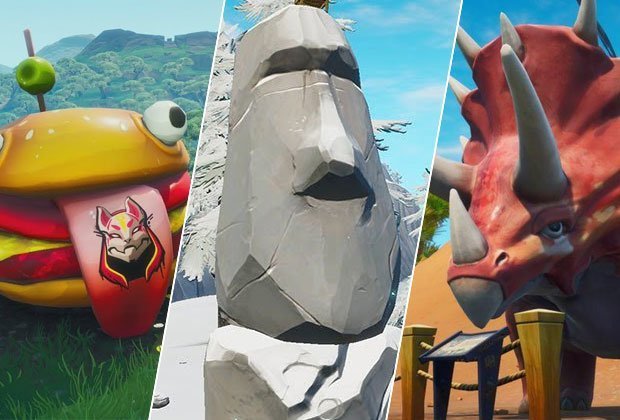 Fortnite Missions are new to Fortnite Season 10 and one of the many challenges in a massive list given to fans this morning is one you might require help with.

The challenge ‘visit drift painted Durr Burger head, a dinosaur, and a stone head statue‘ could have some players stumped as they look to get to grips with an entirely new Season 10 Map.

The general map might be the same, for the most part, but there’s new points of interest and subtle changes at every turn.

Including these particular POI’s that Epic Games want you to visit as part of the ‘Road Trip’ challenges.

Thankfully we’ve had a whole season of writing Fortbyte guides, so we’re well versed in telling people where to go if they want to complete new challenges.

So read on, we’ll explain where to find the Durr Burger head, dinosaur, and stone head statue.

First of all, let’s find that Durr Burger head, which is located near Pleasant Park.

More specifically you’ll find it just east of the location on a hill. Its also been spray-painted with the drift skin logo. The cheeky so and so.

Next up you’ll want to find the dinosaur, which is pretty easy, but, the opposite end of the map south of Paradise Palms. It’s just next to the road, so you can’t miss it. Also, it’s a big red dinosaur. So how can you miss it?

Finally, you need to find the Stone head statue. In Season 10,  you’ll find the dumb dumb near the frozen lake, which is where it’s always been, north of Polar Peak.

Visit all three and you’ll complete the challenge.

If you need some hand-holding to help find it, just take a look at the gameplay on the above video with Fortnite Content Creator, HarryNinetyFour.

When you finish visiting all locations make sure to finish the game for your progress to count.

And that is it! Check back for more guides as we complete them.

Season X – Battle Pass
New Season, new Battle Pass. 100 levels, over 100 new rewards. Find out more information on everything that’s new in Season X in the announce blog. In Season X, you’ll have the ability to gift the Battle Pass to a friend! Available on all platforms (timing may vary per regions) until August 15th. Your first purchase also includes a unique Gift Box for you to use when gifting items from the shop.

B.R.U.T.E.
Few suits make you feel as powerful as a mech suit does. In this two-person vehicle, players can control its movement while their partner controls its firepower. Those feeling extra adventurous can operate it solo by switching between moving and shooting!

Rift Zones
The Zero Point Explosion has made the island volatile! Locations once thought to be lost are beginning to appear, but they aren’t the same as they once were… Drop in and explore to discover what mysterious gameplay changes they have in store.