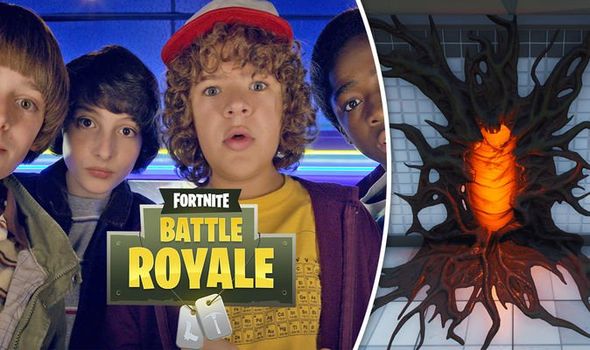 The Fortnite developer is yet to reveal any details about the event, other than a tweet featuring the Fortnite x Stranger Things logo.

You can check it out for yourself below…

ORIGINAL: Fortnite fans are counting down to the start of the Stranger Things Season 3 launch event on July 4.

As Netflix prepares to release the third season of the hit show, portals from Stranger Things have started to appear in Fortnite.

Hints of a Stranger Things crossover appeared at the start of Season 9, when Epic added the Scoops Ahoy Ice Cream Parlor to the Mega Mall.

And with the Fortnite season coming to an end soon, portals have also started to appear in the same location.

Fans of the TV show will recognise the portals as the entry points to the Upside Down.

With the new season hitting Netflix on July 4, fans can expect something to emerge from these portals as part of the Fortnite x Stranger Things crossover event.

It’s possible we’ll get some kind of player-vs-enemy-vs-player action, or perhaps even a twisted version of the Fortnite map.

New skins, items and outfits are also a possibility, especially if it’s anything like the Air Jordan crossover.

Indeed, files for new skins have been found within the latest Fortnite update.

This includes one costume based on the Demogorgan is a monster and another based on popular character Chief Hopper.

Expect the Fortnite x Stranger Things event to begin on July 4 in time for the new series.

In the meantime, Fortnite fans can check out the brand new weapon released as part of this week’s update.

The powerful Drum Shotgun is a new weapon capable of doing 50 damage with just one shot.

It launched alongside a selection of new prefabs and galleries for Creative mode.

Fortnite fans can also take part in the 14 Days of Summer event, which runs until next week.