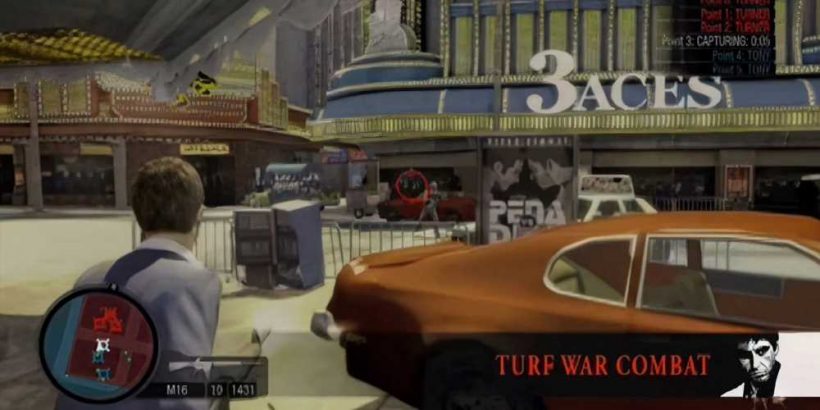 Scarface: Empire's early gameplay footage has emerged, showing Radical Entertainment's open-world crime project as of June 2008. The sequel to 2006's Scarface: The World is Yours was cancelled by Activision shortly after the publisher acquired the studio, following the idea to focus on the Prototype series.

Scarface 2 events would have been set in Las Vegas, with Al Pacino's Tony Montana returning as a protagonist. As revealed by the Mafia Game Videos YouTube channel, "the initial idea was Tony was forced out of Miami during the crackdown on drugs in that area or time period." After that, the mob boss had to decide to move his empire to Vegas. However, other crime lords didn't appreciate Montana's cocaine being sold in their territories, which eventually forced Montana to build his own casino.

From the sounds of this concept, Scarface's follow-up would have been very similar to Mafia 3's core gameplay loop. The players would have strengthened their own mob empire while forcing competitors out of the business, taking over their territory, and building their own trustful crew. Since there's a large desert surrounding Las Vegas, the developers were planning to utilize this area for gathering supplies and disposing of the bodies — pretty much like the Bayou in Mafia 3's New Bordeaux.

In the never-before-seen pre-production gameplay for Scarface: Empire above, Tony Montana can be seen calling the shots on his henchmen, but he's not the kind of boss who is afraid to get his hands dirty. In the following scene, Montana gets into a shootout with gang members on the bright streets of Las Vegas. There's also a dynamic day/night cycle, careless driving, and intense police chases featured in the video, leaving no doubt that Scarface 2 would make a pretty solid GTA clone if the game ever saw the light of day.

According to the source, the primary reason for Scarface: Empire getting axed in 2008 was too many other open-world games in development at Activision at that time. "It was pretty devastating to lose over two years of effort on what would have been a pretty cool game," a former Radical developer said.