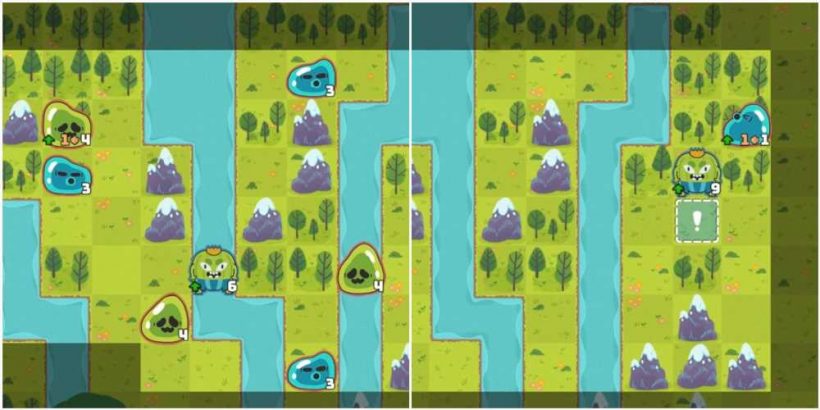 Floppy Knights’ Challenge Levels are a great way to get to grips with the game’s mechanics in a way that is not quite so forgiving as the main campaign. The mode tasks you with completing a specific goal, often under pressure, whilst also providing you with a premade deck. Not only is this mode fun, but it also forces you to understand your cards in a way you may have overlooked in standard play.

Barrel Roll is designed to introduce you to the concept of the ‘tank and spank’ method of play. It revolves around the tag-team duo of Barrel Cactus and a new Commander, Vera. Together, these two units must carve a path across the battlefield against a vastly superior force. This guide will help you achieve that goal. 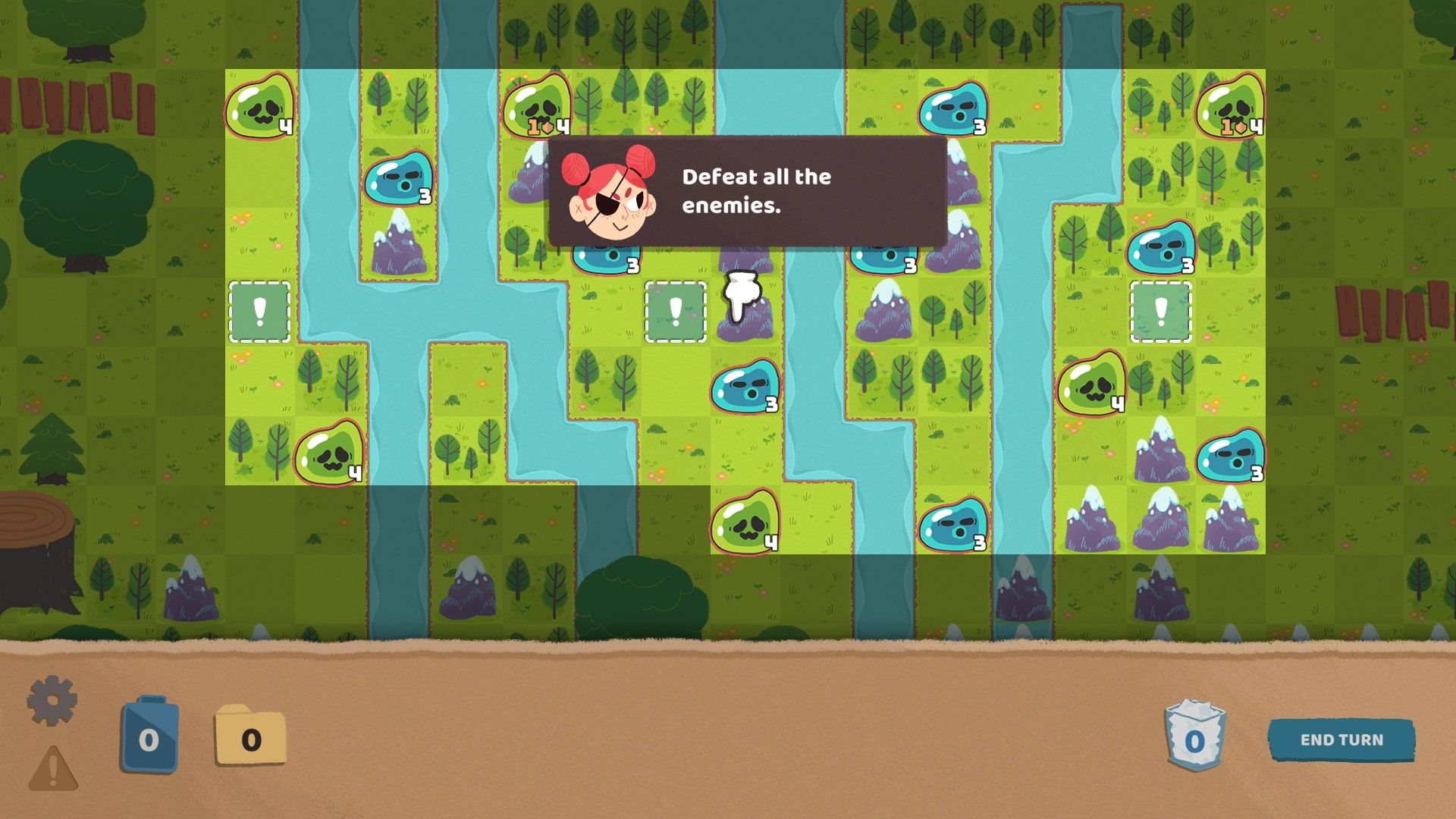 The goal of this Challenge is to destroy all of the enemies – in this case, Slimes – in 12 turns or less. This might seem like a tight requirement when you consider just how many enemies are on the map, how much water will slow you down, and how few units you have. It is, in reality, a very generous timer and you should be finished with plenty of time on the clock. 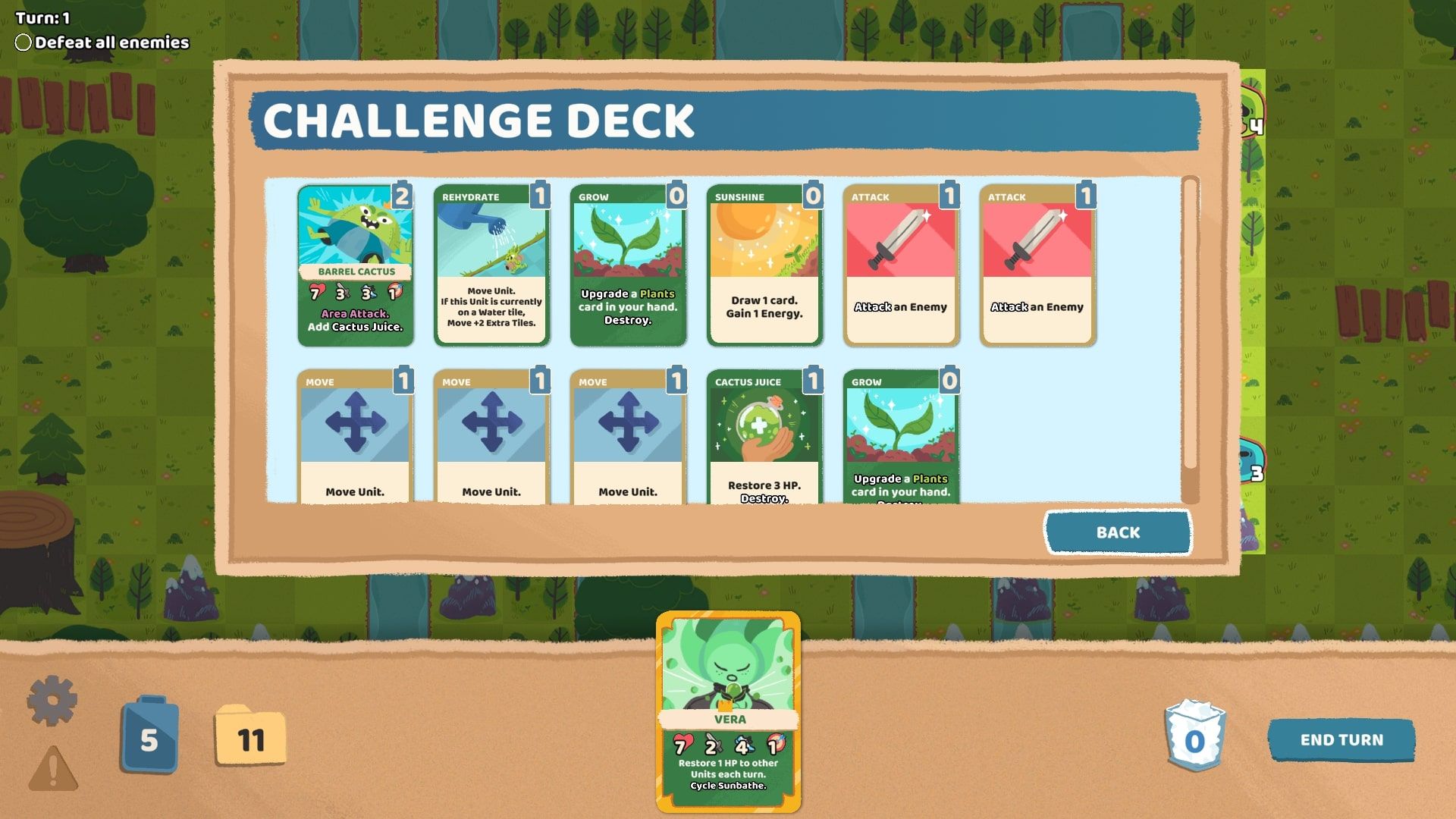 Before you get stuck in, you need to understand your deck. Your deck includes:

This deck is very simple but can be used to great effect. The general idea is to buff your Barrel Cactus and use powerful healing effects to steamroll through the opposition.

Barrel Cactus is a very powerful unit, it has a lot of HP, a decently powerful attack, and that attack has an AOE component. When upgraded with Grow, Barrel Cactus gets even better. He gains +2HP, making him very hard to kill when supported, and he also gains Payback, which inflicts 1DMG every time he is struck in melee. This is especially important to note, as it will allow Barrel Cactus to kill any melee Slime in a single hit, providing they hit him first.

Vera as a Commander is very weak on the offense, but a fairly potent threat when supporting. Her Passive restores 1HP to every other unit at the start of each turn. This alone will help Barrel Cactus “barrel” through the opposition, but there’s more. Vera also generates the incredibly powerful Sunbathe card every turn. This card allows a unit to move and heal 1HP at the same time. This functionally allows Vera to heal 2HP per turn on Barrel Cactus, which is very powerful.

Sunbathe will be your go-to movement ability at the start of each turn as it heals you, but Rehydrate can be used to gain cover vast amounts of ground quickly. Rehydrate allows you to move an additional two spaces providing the unit you are moving started in water. A common play will be to use Sunbathe to move into water, then use Rehydrate to zip around the battlefield.

Grow is an exceptionally powerful card. The ability to buff cards can lead to new ways of play. The downside? Grow is a one-use affair. Once you use it, it’s gone. Thankfully, you have two in your deck. Ideal targets for Grow are Barrel Cactus, Cactus Juice, and Sunshine. Barrel Cactus should be the priority, however, as the bonus stats are simply too good to pass up.

Sunshine is a phenomenal card. For the low, low cost of zero Energy, you can draw an additional card, and gain an additional Energy. This card does not destroy itself when used either, so you can use this constantly. Not only that, but because this deck is so small, and a large portion of it is one-use only, you may find yourself using this card every single turn.

How To Defeat Slimes Effectively 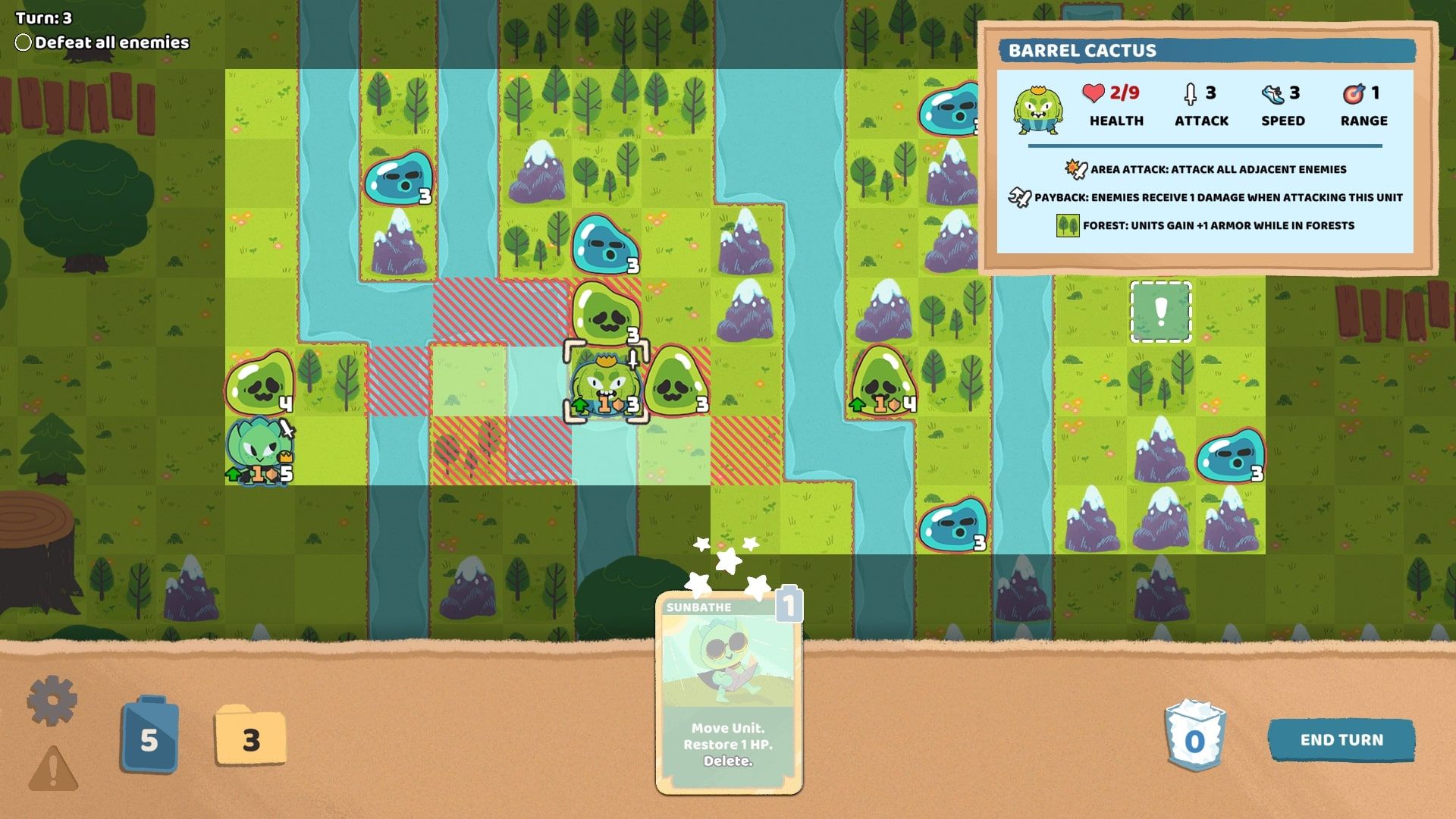 Because of the RNG involved in this mission, we can’t do a step-by-step walkthrough. What we can do, however, is provide the most optimal way to tackle the game’s threats. Namely, the two Slime variants.

Green Slimes are your biggest threat. They deal enough damage to be cut through your Barrel Cactus in larger numbers, and they have enough HP to survive an attack, making them somewhat awkward to deal with on the offense.

The best way to deal with them is to bait them into attacking you. Since you will use Grow on your Barrel Cactus, enemies will take 1DMG every time they attack. You want to move your Barrel Cactus in range of enemies and get them to surround you. They will then take damage. On your turn, a single attack will kill them all.

Be warned that your Barrel Cactus is not immortal. Be mindful of how much damage you are going to take by checking Threat Ranges. Your Barrel Cactus can survive, at most, two Green Slimes and one Blue Slime attacking at the same time. Because of how this mission is laid out, you should never be in a situation where you are being attacked by more than this.

Blue Slimes are more of an annoyance. They have less damage and less HP than Green Slimes, but they come with a ranged attack. You want to try and move your Cactus in range to attack these guys first. Attacking Green Slimes first has no benefit due to their HP. Attacking a Blue Slime, however, will kill that Slime. This damage reduction is very handy.

This deck contains Attack cards, but they are fairly limited. Even with a small deck, you might not get many options to attack multiple times. In the early game, any opportunity you have to attack multiple times is likely better spent on Vera. Due to this mission’s unique deployment (more on that in a bit), Vera will be isolated. Clearing out enemies with her is an absolute must. Aggressive use of Attack Cards will help with this.

Remember, Barrel Cactus is often better at tanking hits and then counter-attacking.

How To Position Your Units 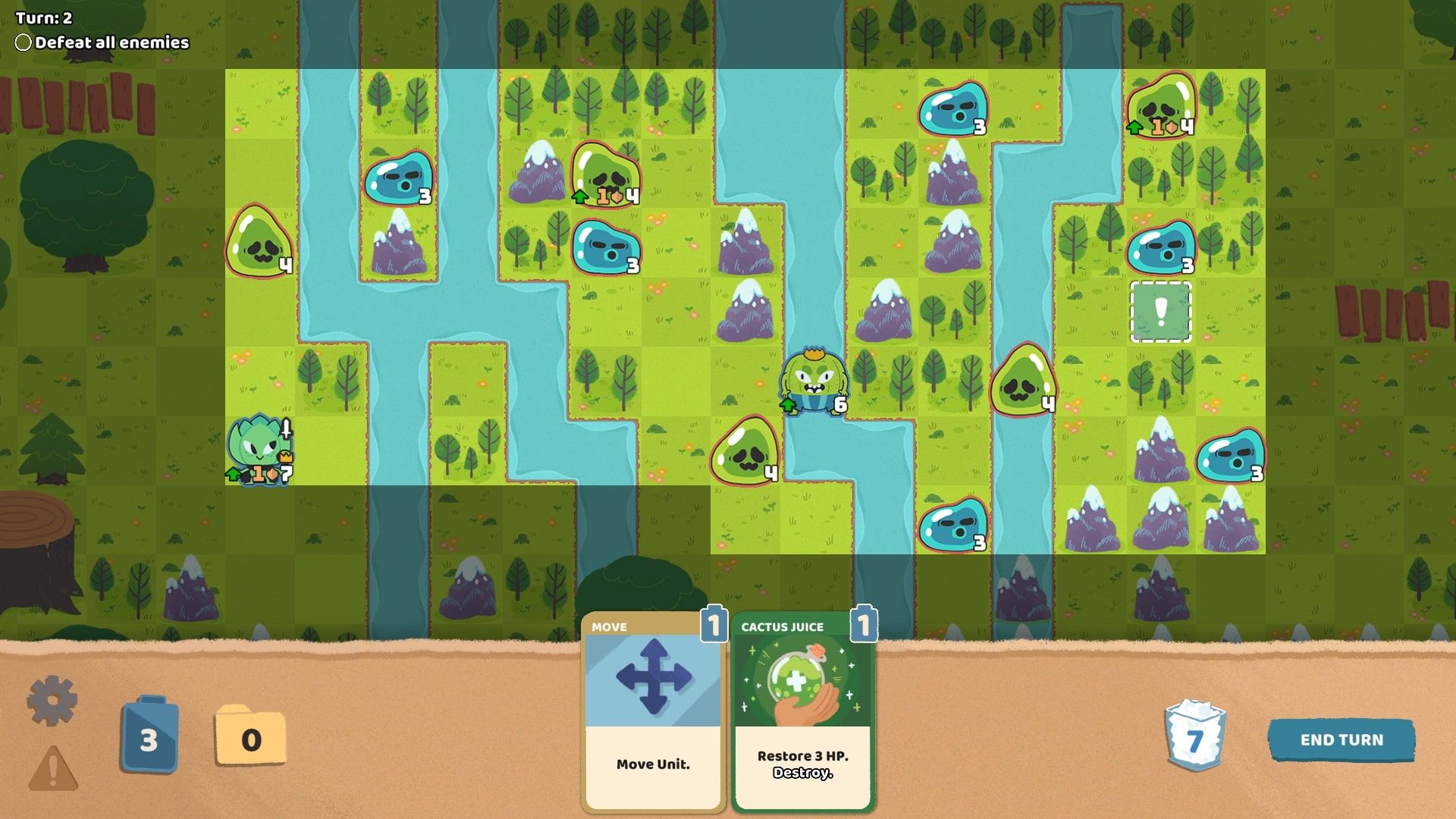 Unit positioning is key in this mission. You are on the clock, and you need to be efficient with your attacks if you want to make it through in one piece. Not only that, this mission has a unique style of deployment.

You have three Deployment Zones in this mission, each only able to hold a single unit. Not only that but once a Zone has been used, it will be destroyed. This means you can, at max, only ever summon three units, and your units will not be clumped together. This forces each unit to act somewhat independently. Thankfully, Vera’s abilities are global.

The best way to deploy in this mission is to put Vera on the left Deployment Zone, and Barrel Cactus in the middle. The reason for this is simple. Vera is fairly weak, and the resistance on the left is substantially less than in other areas on the map. The middle for Barrel Cactus is ideal because he is more than capable of dealing with the immediate threats and moving to the right to finish the mission.

Managing Threat Ranges is the name of the game here. Vera in particular is very vulnerable to being ganged up on and killed. This is an instant Game Over. Make sure that you are only being attacked/engaging groups that you know you can deal with. In this case, Vera can tackle one Green Slime and one Blue Slime at the same time. Barrel Cactus can tackle two Green Slimes and one Blue Slime.

Remember to use Sunbathe to heal your units and to end your movement in water if you want to make use of Rehydrate. The bonus movement is very nice, especially on Barrel Cactus as he is incredibly slow. Make water tiles work for you. 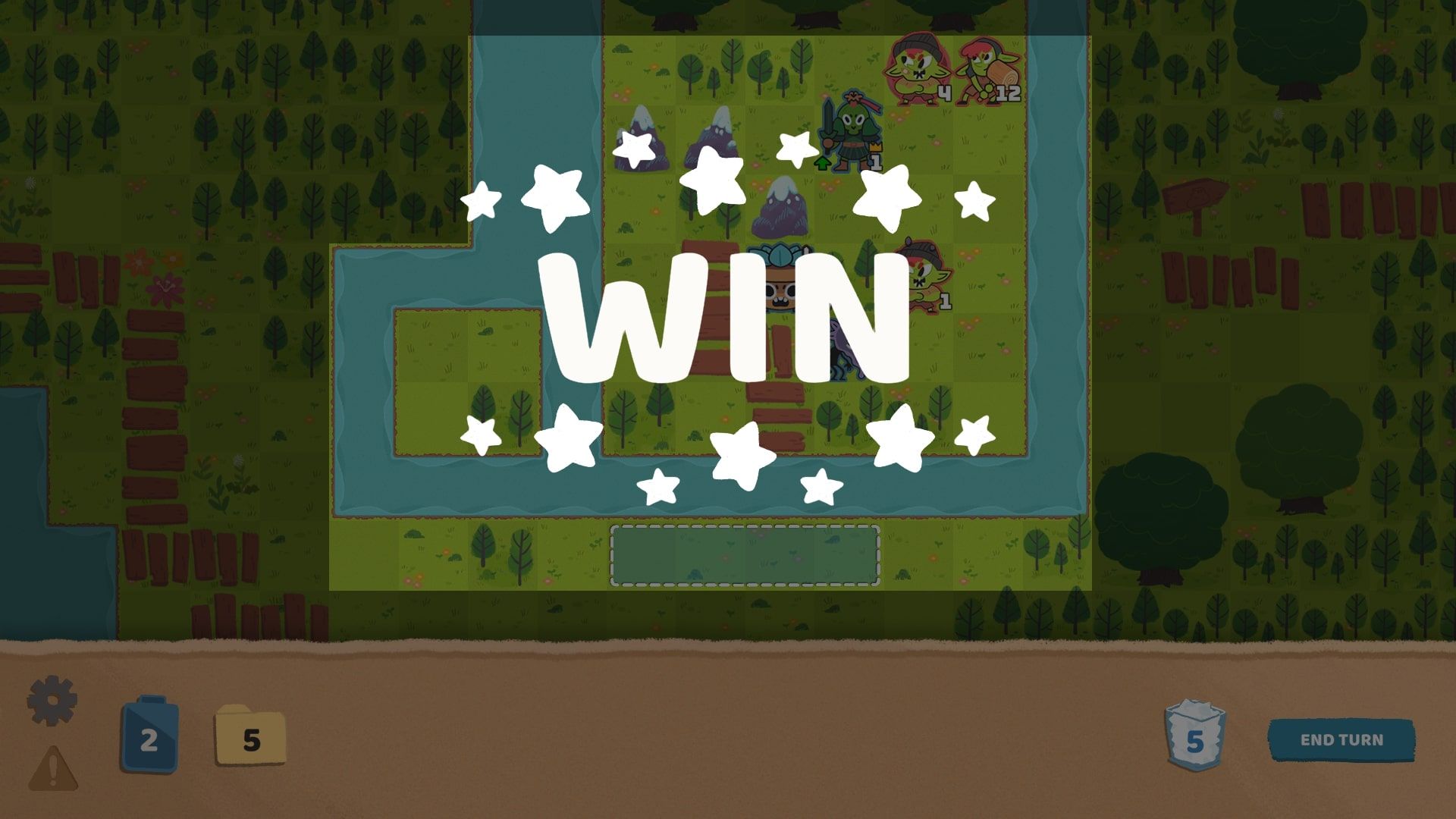 Your reward for completing this mission is 20 Coins. These can be spent on crafting new cards and improving your deck in the main campaign. This mission can also be repeated if you want to gain even more money.