Chapter 9 takes place beneath the bright lights of Wall Market and has 5 Side Quests in total. Unlike other chapters though, you’ll only be able to complete three of them in a single playthrough, meaning that you’ll need to replay the chapter multiple times if you’re aiming to unlock the Best in the Business trophy. That’s okay though, as multiple playthroughs are also required for those hoping to see all three of Cloud’s dresses. 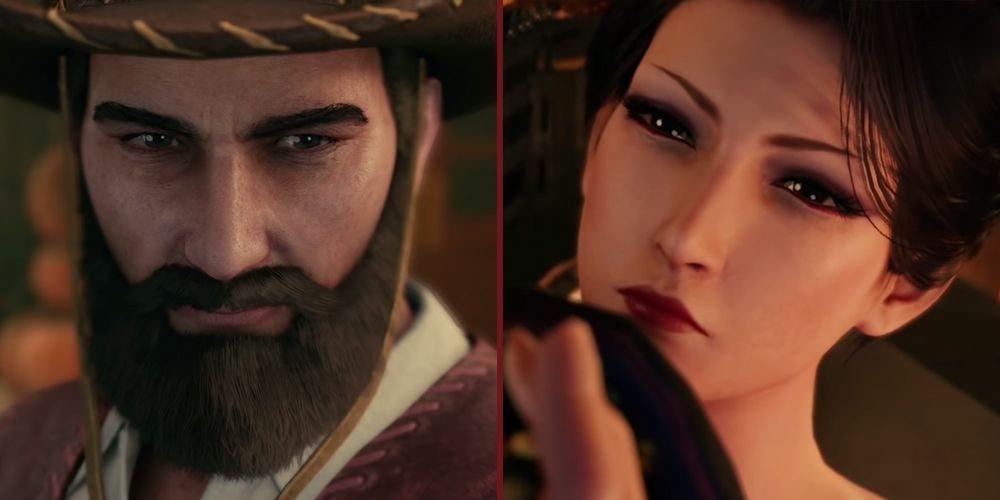 Which three side quests you have access to is tied to a handful of key decisions. You’ll either get the Chocobo Sam side quests The Party Never Stops and A Dynamite Body or the Madam M side quests The Price of Thievery and Shear’s Counterattack. The Burning Thighs side quest will be available regardless of which choices you make. 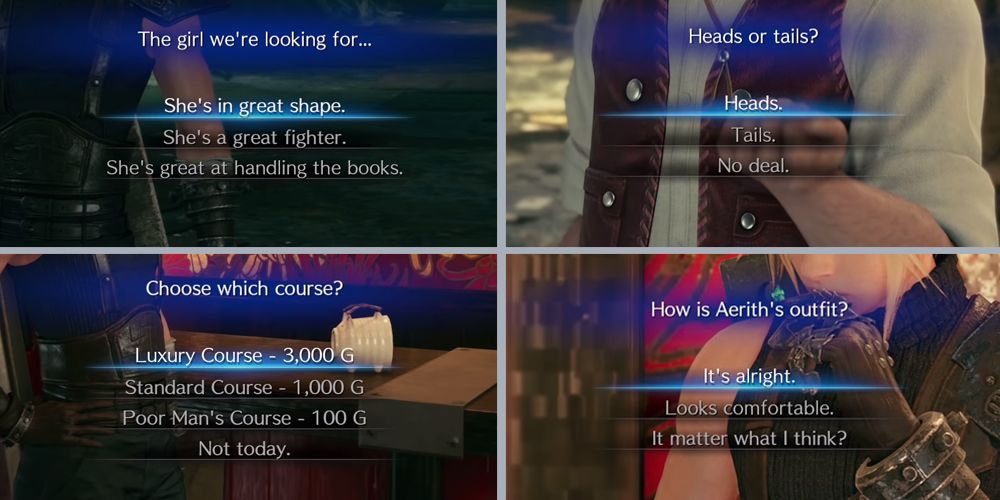 To unlock the Chocobo Sam side quests, you’ll need to say that Tifa is in great shape, pick either heads or tails when Sam proposes a coin toss, agree with Johnny, choose the Poor Man’s massage course and say that Aerith’s outfit is “alright.” To gain access to Madam M’s side quests, you’ll instead need to say that Tifa is good with the books, select the “No Deal” option when Sam proposes a coin toss, ignore or disagree with Johnny, splash out on the more expensive Luxury massage course and choose the “It matters what I think?” option when asked about Aerith’s outfit. 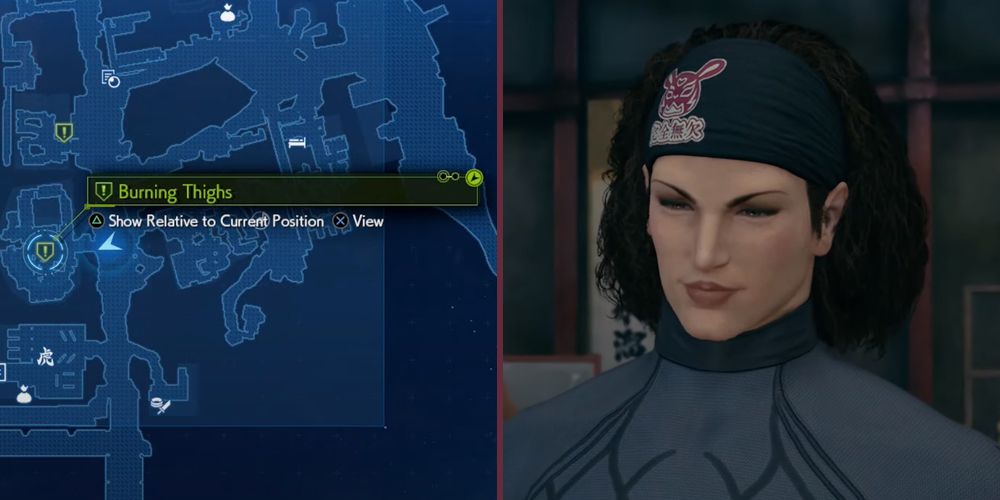 Head over to the gym near the Corneo Colosseum and speak with Jules, the long-haired trainer inside. If you played the original release of the game, you should be familiar with the squats challenge that he proposes already. If you’re new to the world of Final Fantasy VII though, it might take a little bit of getting used to. 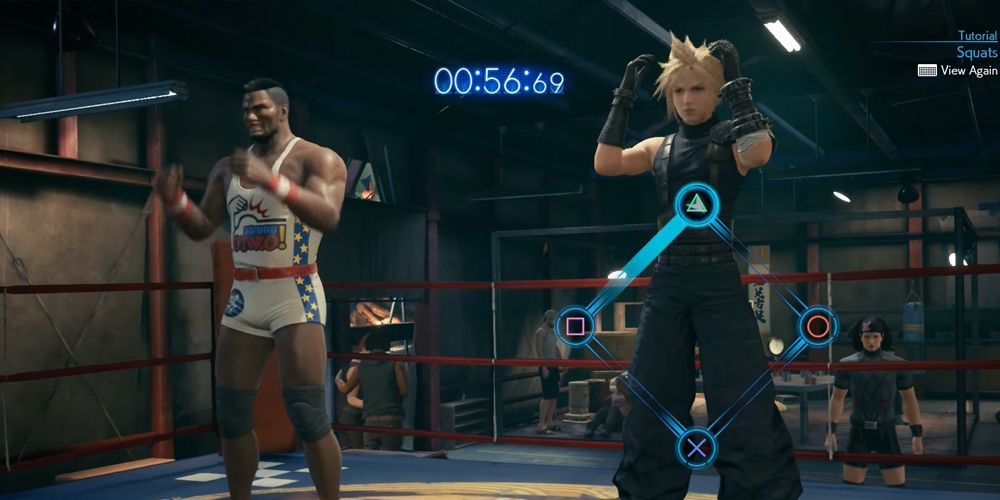 To complete the side quest, you’ll need to outperform Ronnie by pressing the face buttons on your controller to the correct rhythm. The more squats you complete, the faster you’ll need to push the buttons. Thankfully, Ronnie is pretty awful and so beating him isn’t the least bit challenging. 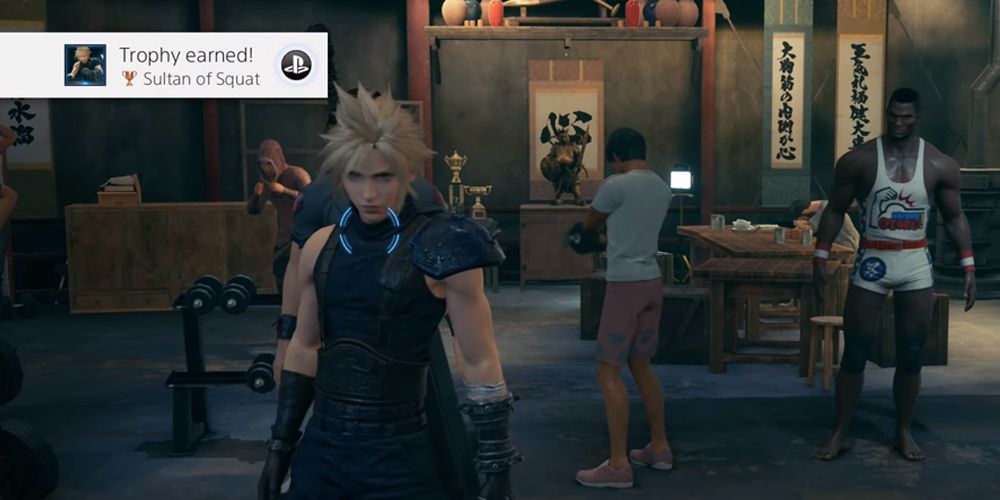 You’ll get three Mega Potions for completing the quest, but there are two additional difficulty levels for those looking for more of a challenge. Beating them will reward you with an orb of Luck Up Materia and a Champion Belt as well as unlocking the Sultan of Squat trophy. If you’re having trouble with some of the more difficult levels, be sure to check out our guide on how to master the squats challenge. 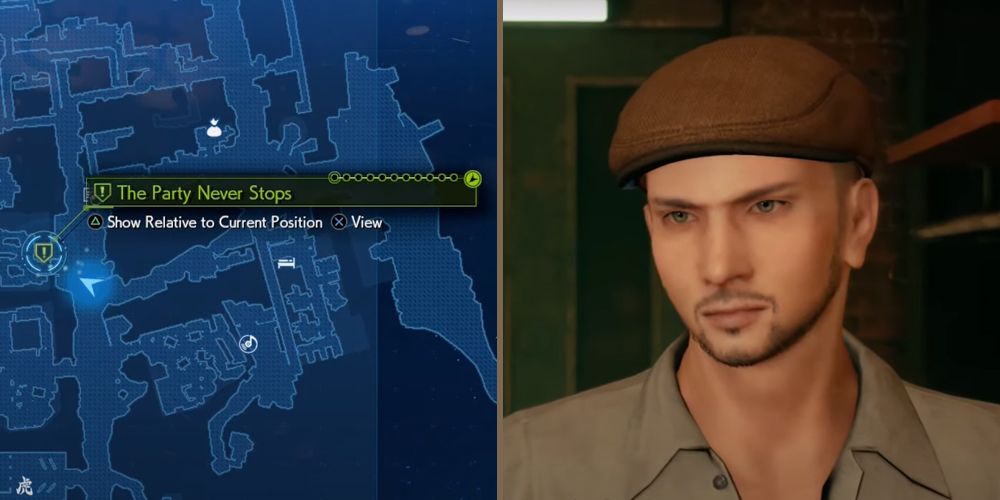 After completing the Burning Thighs side quest, head over to the nearby clothing store and speak with the owner’s son. Apparently, the owner hasn’t been having the best of times lately and is drowning his sorrows at one of Wall Market’s many bars. You’ll need to find him and convince him to come home, which ends up being a lot easier said than done. 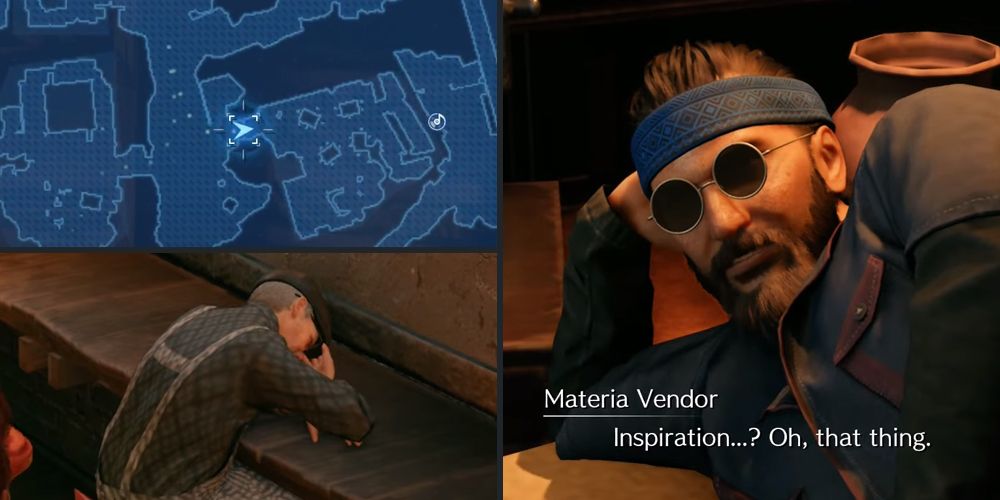 Johnny will show up and lead you over to the Yoidore bar and you’ll find the clothing store owner there lamenting the loss of his ‘inspiration.’ He’ll explain that he lost it in a bet with the Materia vendor, so head over to the Materia Store next to find it. Of course, the vendor’s not going to just hand it over to you and will ask that you acquire a special item from the vending machine at the inn for him before he does. 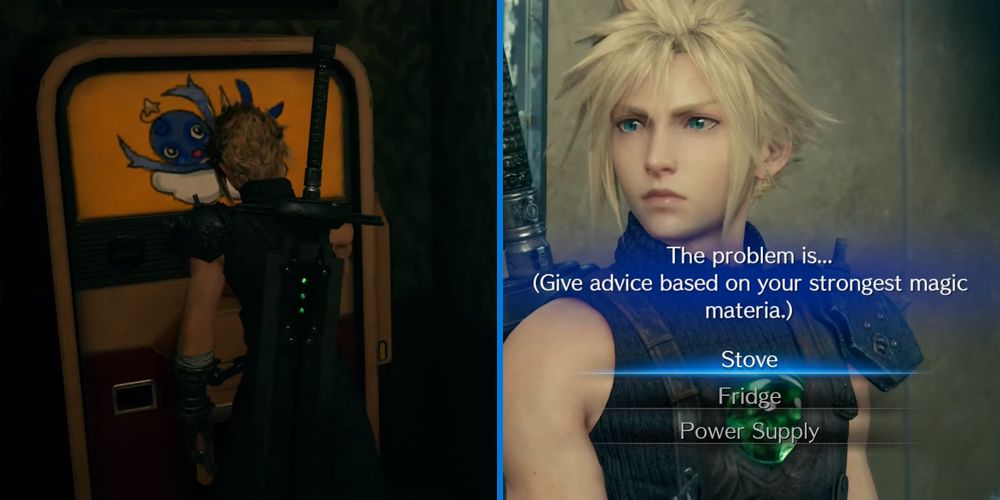 It will take three attempts, but the machine will eventually spit out ‘the sauce.’ Take it to the Materia vendor and he’ll tell you that he no longer has the ‘inspiration’ and suggests that the restaurant owner might have it. Upon arriving at the restaurant, you’ll need to use one of your elemental Materia on his appliances, so choose the appliance that corresponds with your highest level Materia (Fire = Stove, Ice = Fridge, and Lightning = Power Supply). After doing so, the restaurant owner will prepare a meal for Johnny who’ll then get incredibly sick. 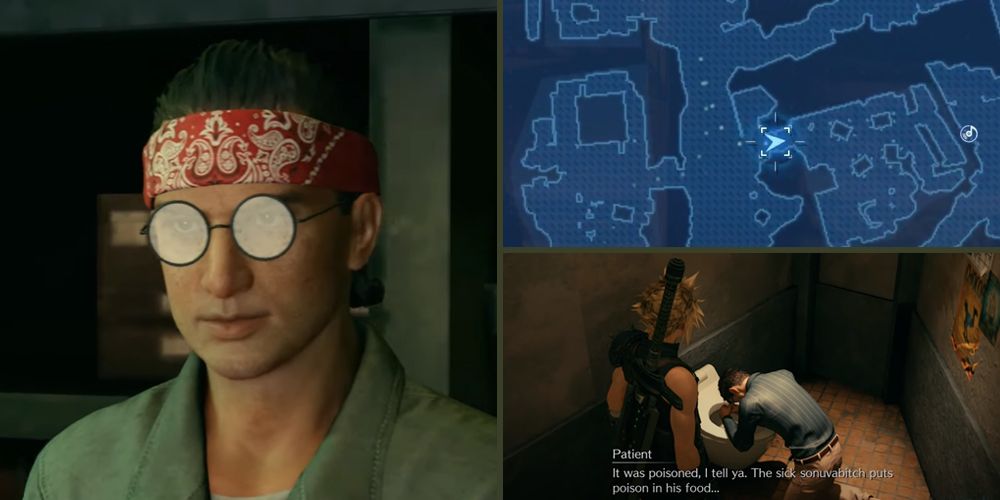 The restaurant owner will give you a medicine voucher, so run over to the pharmacist to redeem it. He’ll ask you to deliver some medicine for him while he tends to Johnny which requires another trip to the Yoidore bar. Find the sick person in the bathroom and give him the medicine and then return to the pharmacist. He’ll give you the ‘inspiration,’ which turns out to be a VIP pass for the Honeybee Inn. 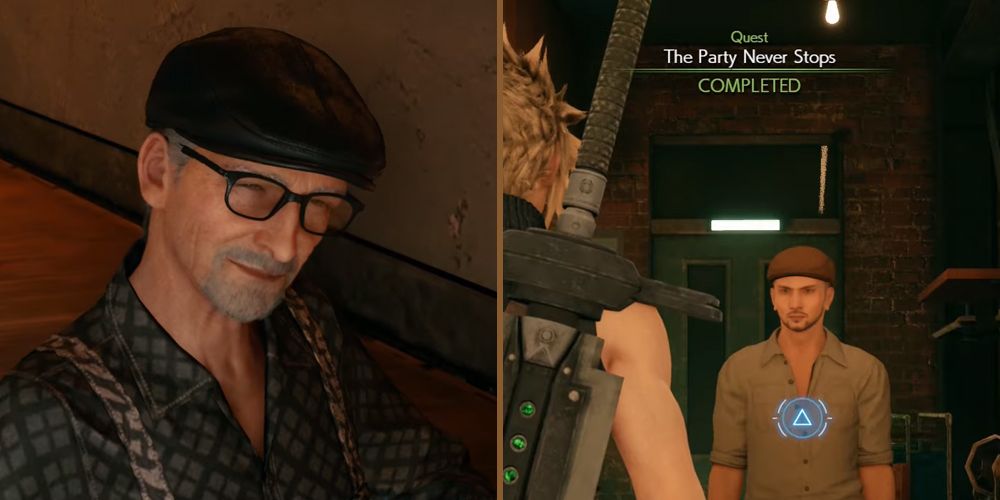 Return to the bar and reunite the Clothing Store owner with his prized possession and then make your way back to the Clothing Store to finally wrap up the quest. You’re probably expecting a pretty decent reward for all of that legwork, but alas. All you’ll get is a bottle of Turbo Ether. 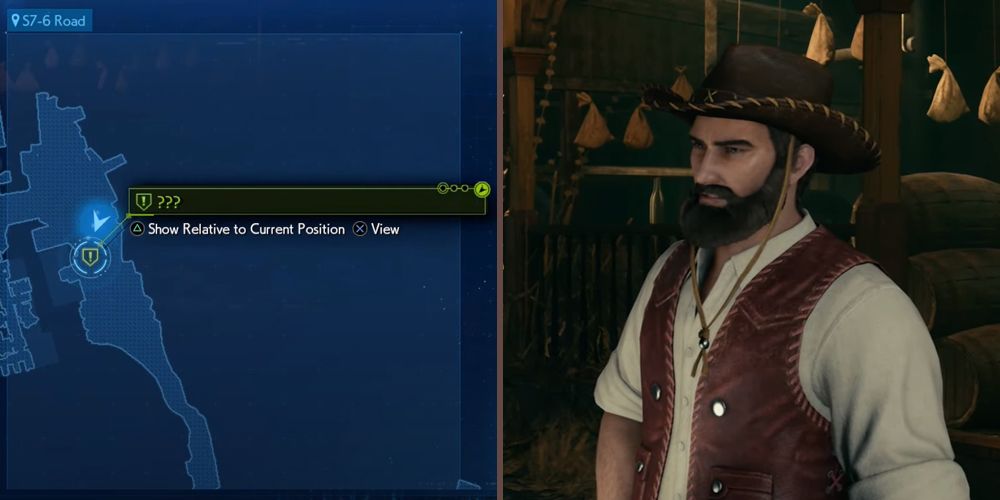 Sam’s second quest is a Corneo Colosseum battle against two Bombs. To get the ball rolling, you’ll first need to have completed the previous two side quests (Burning Thighs and The Party Never Stops). After doing so, head over to Chocobo Sam and then make your way to the coliseum. 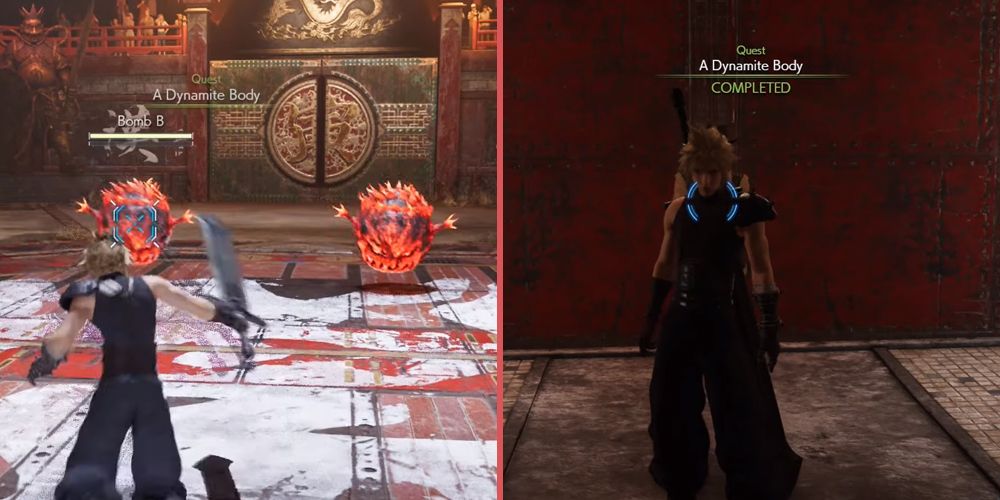 The Bombs have a lot of fire attacks, so if you picked up the Elemental Materia in Chapter 6, you can pair it with an orb of Fire Materia in your armor to nullify a lot of their attacks. It’s best to keep your distance while they’re using area attacks, so bide your time and only get in close when you’re confident you can land an attack without taking too much damage. It might take a while, but the Arcane Scepter you’ll get for defeating them is a more than fitting reward.

2 The Price of Thievery (Madame M) 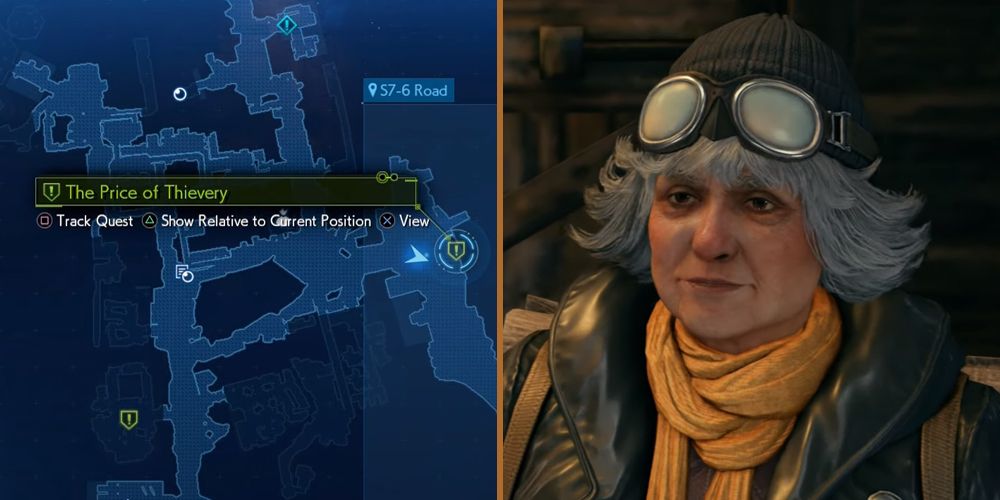 If you made all of the right choices to unlock Madame M’s side quests and have already completed Burning Thighs, you’ll find Mireille (the old lady from the Sector 5 Slums) arguing with one of Chocobo Sam’s stable hands. Interact with them and Mireille will ask you to track down three bandits who have been trying to blame their misdeeds on the Angel of the Slums. 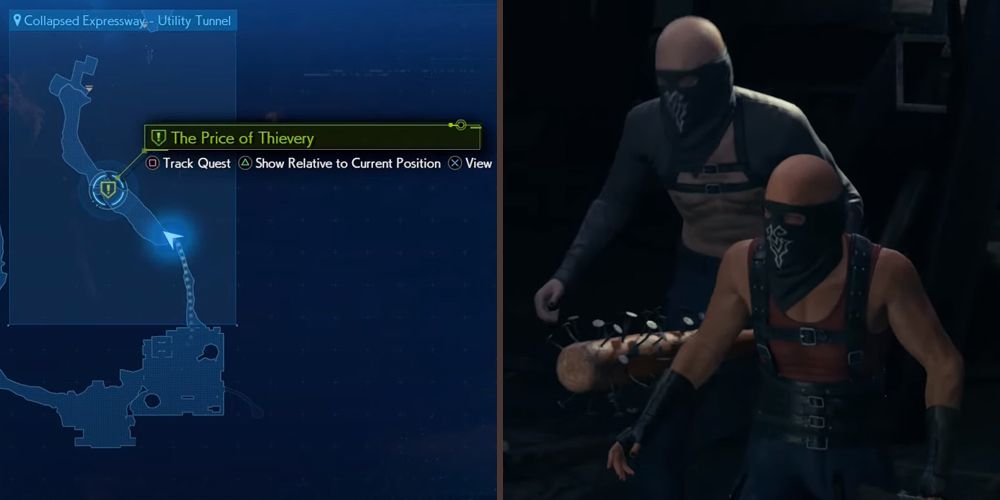 Head back to Evergreen Park and enter the utility tunnel that leads to the collapsed expressway and you’ll soon run into some old friends boasting about their latest crime. Thankfully, they’re all incredibly weak to fire attacks, so if you picked up the Elemental Materia in Chapter 6, pair it with an orb of Fire Materia in your weapon to maximize damage. 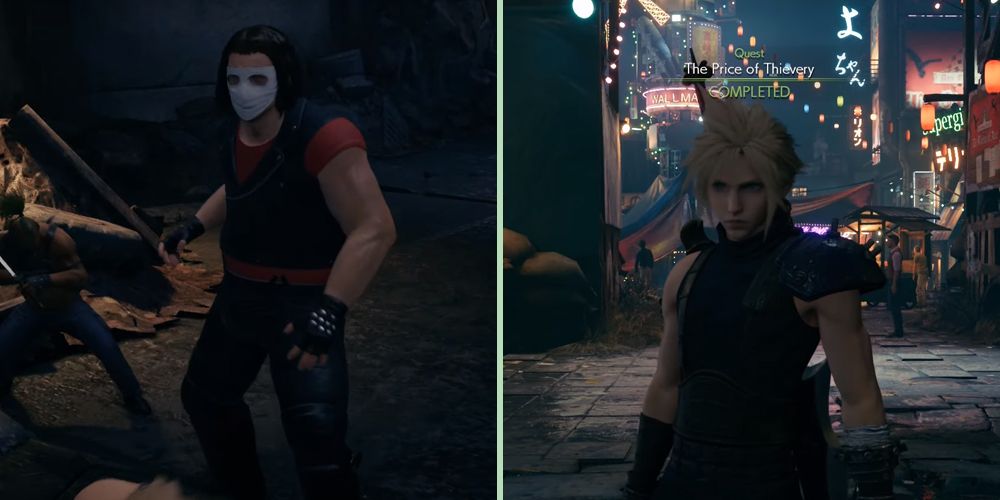 The Grungy Bandit is fairly tough compared to the other three, but providing you’re able to dodge his heavy-hitting attacks, you shouldn’t have too much trouble. Take out the weaker bandits first and be sure to steal a Champion Belt from the Grungy Bandit while you’re here. Once defeated, Cloud will drag them back to the stables and you’ll get a bottle of Turbo Ether for your troubles. 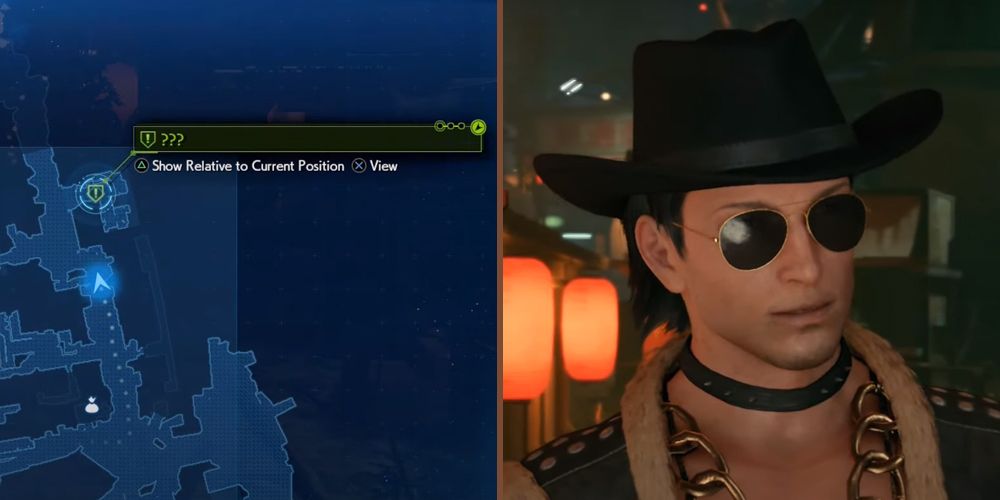 After completing The Price of Thievery, head over to Madam M’s place and the Gatekeeper from the coliseum will greet you outside and invite you to a special battle. Make your way over to the Corneo Colosseum and prepare yourself for a fairly simple battle. You’ll be up against the Jury-Rigged Cutter again, so if you have it, pair the Elemental Materia with an orb of Lightning Materia in Cloud’s weapon. 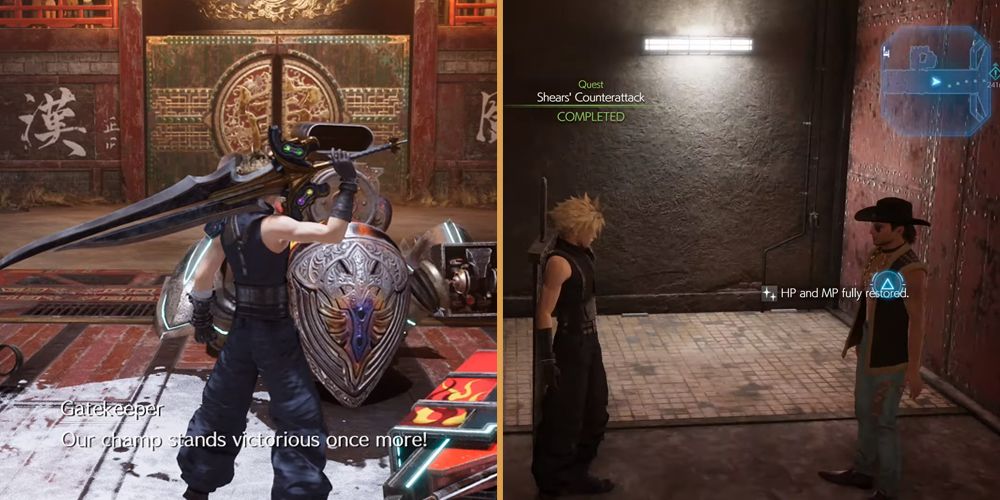 Try and get behind it whenever possible and be sure to get out of the way when it starts spitting fire. Be sure to use your abilities whenever you have ATB gauges to spare and hit it with a few casts of Thundaga from time to time to speed things up. Once the battle is over, Madam M will greet you at the gates and, if you don’t already have it, she’ll reward you with the Arcane Scepter, a weapon for Aerith. 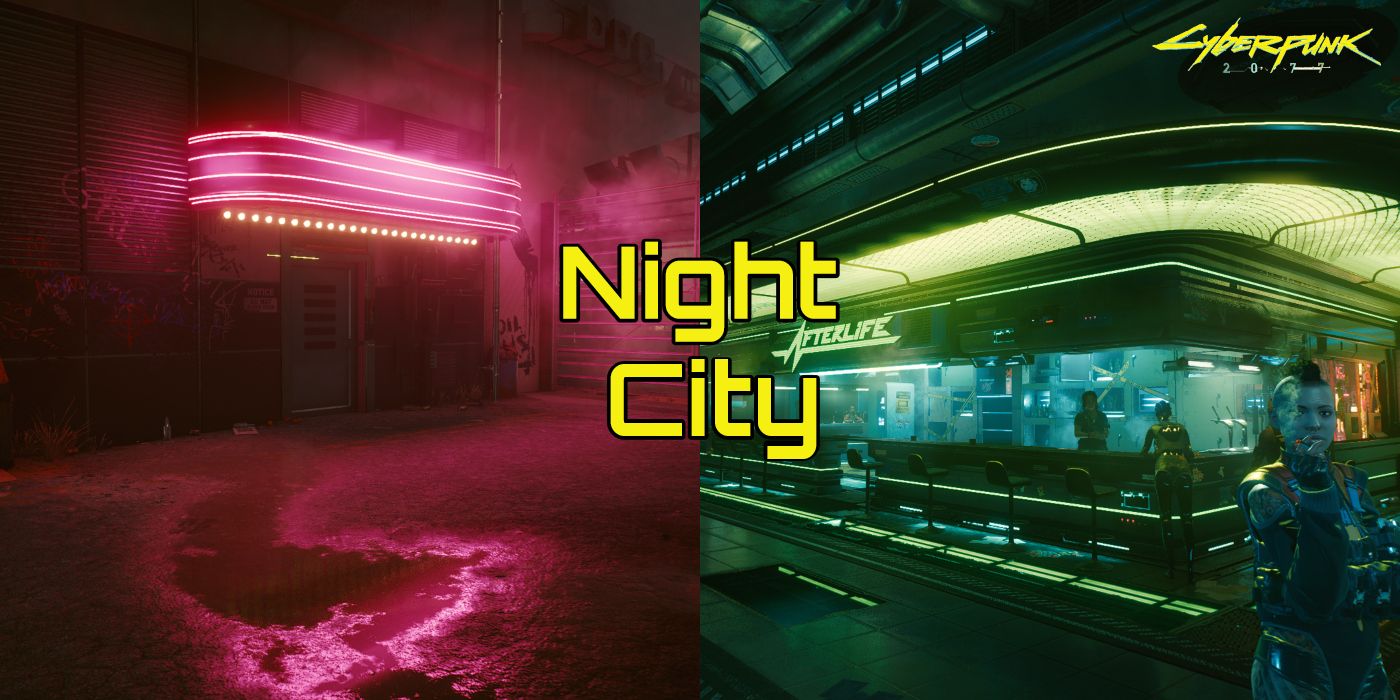