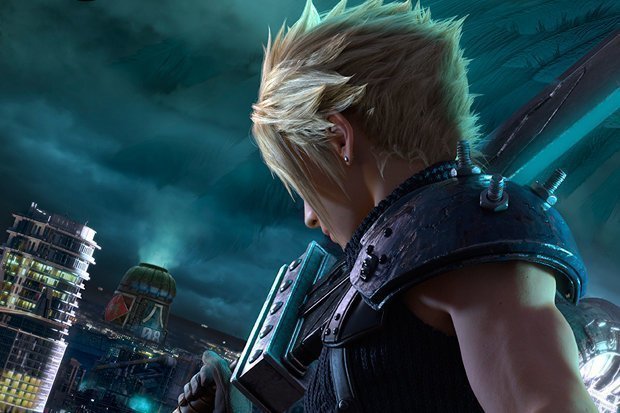 Introduced with an amazing-looking cutscene featuring Cloud and Aeris from the title’s intro sequence, Square Enix brought Yoshinori Kitase on stage to chat about the game and reiterate how happy Square Enix is with progress on the game, and the way the characters are looking.

The first disc will be a ‘standalone game in its own right’ and will be set in Midgar – the first city in the title.

Each hit of the Square button swings the Buster Sword – the game merges real-time action with strategic command-based combat.

Cloud attacks, dodges and blocks in realtime: you need to be tactical to win. ATB returns in the game, and charges with more combo attacks.

Once an ATB bar loads, the game enters slow-motion and you can choose special attacks and cast spells.

Each character has different abilities depending on their setup, and you can switch between characters with a single button tap in-game.

You can issue attacks to your allies which will use an ATB bar. You can bind abilities and spells to buttons to make it more streamlined.

Final Fantasy VII Remake is coming out sooner than many had thought. Before its big E3 conference tomorrow, Square Enix went ahead and announced a release date for the much-anticipated remake: March 3rd, 2019.

The announcement was made during a special Final Fantasy VII concert held earlier today at the Dolby Theatre in Los Angeles. The performance – titled “Final Fantasy VII: A Symphonic Reunion” – saw more than 100 musicians play through the beloved JRPG’s soundtrack.

Shortly after, Final Fantasy VII’s original director, Yoshinori Kitase, took to the stage, followed by legendary series composer, Nobuo Uematsu. Both were met with a rapturous applause that only ended when it was clear we’d be seeing more footage from the game.

Sure enough, we were treated to another look at this long awaited remake. Cloud, Barrett, Aeris, and the AVALANCHE gang were all present during this action-packed preview from the game’s early stages.

We saw interactions and dialogue between these characters, complete with english voice overs.

There were brief glimpses of the battle system, too. Final Fantasy VII remake won’t be using the same turn-based combat the original did some twenty years ago.

The title screen was followed by a date: 03/03/2020. Kitase-san confirmed that more information will be available for Final Fantasy VII Remake during the Square Enix E3 2019 press conference tomorrow, June 10th, at 7.00pm.

It was not confirmed whether this is in fact just one chunk of the overall Final Fantasy VII package. It has been speculated for a long time that the remake is being split into three parts (perhaps one episode per disc of the original game).

It’s likely Square will show the same gameplay again tomorrow at its conference with a proper look and explanation of what’s being changed for the remake.

After skipping a press conference in 2017, Square Enix returned with a thud in 2018 with a wholly uneven showing which was missing some key things.

A strangely remixed version of a Kingdom Hearts trailer that had been shown on Microsoft’s stage, some solid footage of Shadow of the Tomb Raider and Just Cause 4 were about the only highlights.

The Quiet Man’s live-action trailer was an odd choice (with the game launching late last year to a poor critical response), and a certain pair of heavy hitting titles (namely a long-awaited remake and an Avengers game) remained entirely absent – leading many to question whether the company needed a conference at all.

Thankfully, those absentees look to be a key focus at Square Enix’s E3 2019 conference alongside new IP like the mysterious Outriders.

Who knows, maybe we’ll get a glimpse at Final Fantasy 16 or some Kingdom Hearts DLC as well.

One of the bigger titles to be confirmed is Dying Light 2, which had a strong showing last year on the Xbox stage. Here’s hoping we’ll get a release date.

Will Square make any next-gen announcements? Last year’s conference was highly focused on the PlayStation 4 and PC platforms, leaving Xbox owners out in the cold for many announcements.

You can catch the stream at 2 am BST on 11th June – so set your alarms folks! While last year’s conference ran for half an hour, expect more this year given the more exciting titles on offer.

Final Fantasy 7 Remake – What We Know So Far

Since its announcement on Sony’s stage at E3 2015, Final Fantasy 7 had only been seen one other time prior to last month’s State of Play video. While some gameplay had been seen at PSX in 2015, we finally got to see more of the game in May of this year – and it looks to have been worth the wait.

While the game is going to be split into two episodes, a leak allegedly from within Square Enix has suggested that the first episode will end after our characters leave the city of Midgar.

We also know from this leak that many of the characters will maintain their original design but with smaller tweaks, while iconic villain Sephiroth won’t be shown in the flesh for quite some time – building up the mystique around the character.

We don’t know if the game will be at E3 2019, but with news promised soon in the State Of Play video – we’d expect to hear something.

Oh, and while the game is coming to PlayStation and Xbox consoles, it is due to have a timed exclusivity window to PlayStation 4 – that is, unless it’ll be launching on next-gen systems.

While the game has no release window, we did get something very interesting from the aforementioned leaker.

We’re told that the game will be playable on the E3 show floor, while PlayStation Plus users will be able to download a demo shortly afterwards. Of course, this could be false info, but it’s about all we have to go on at this point.

If true, it could mean the first episode will land this year – which would be quite incredible.

Pop these times into your diary and make sure you return to read all the big gaming news as it’s revealed on the day: