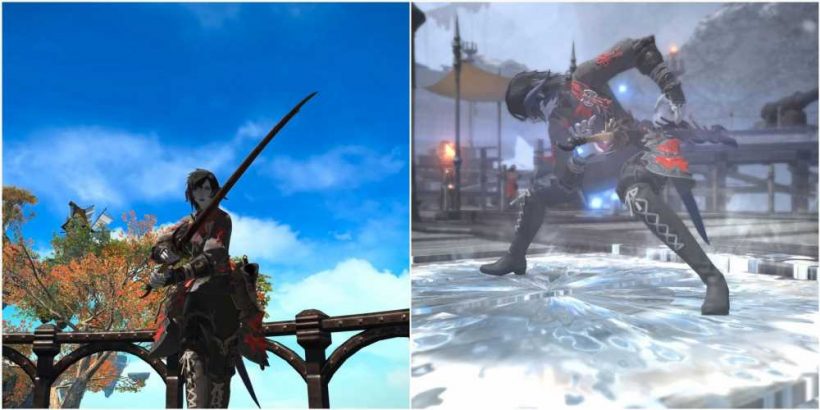 Samurai is one of Final Fantasy 14’s most popular DPS jobs, known for its lengthy, flashy sword combos that deal high damage in short bursts. In the game’s PvE content, they’re a force to be reckoned with, a reputation that as of Patch 6.1, is now matched by their PvP counterpart.

Despite the sometimes confusing skill names, the PvP version of Samurai represents one of the more accessible classes that can be played in the game’s PvP content. With a simple but effective core rotation, excellent movement, unique defensive abilities and a devastating limit break, Samurai’s got a dynamic toolkit. Follow this guide to learn how to use it best, and you’ll be winning matches effortlessly with your newfound samurai skills. 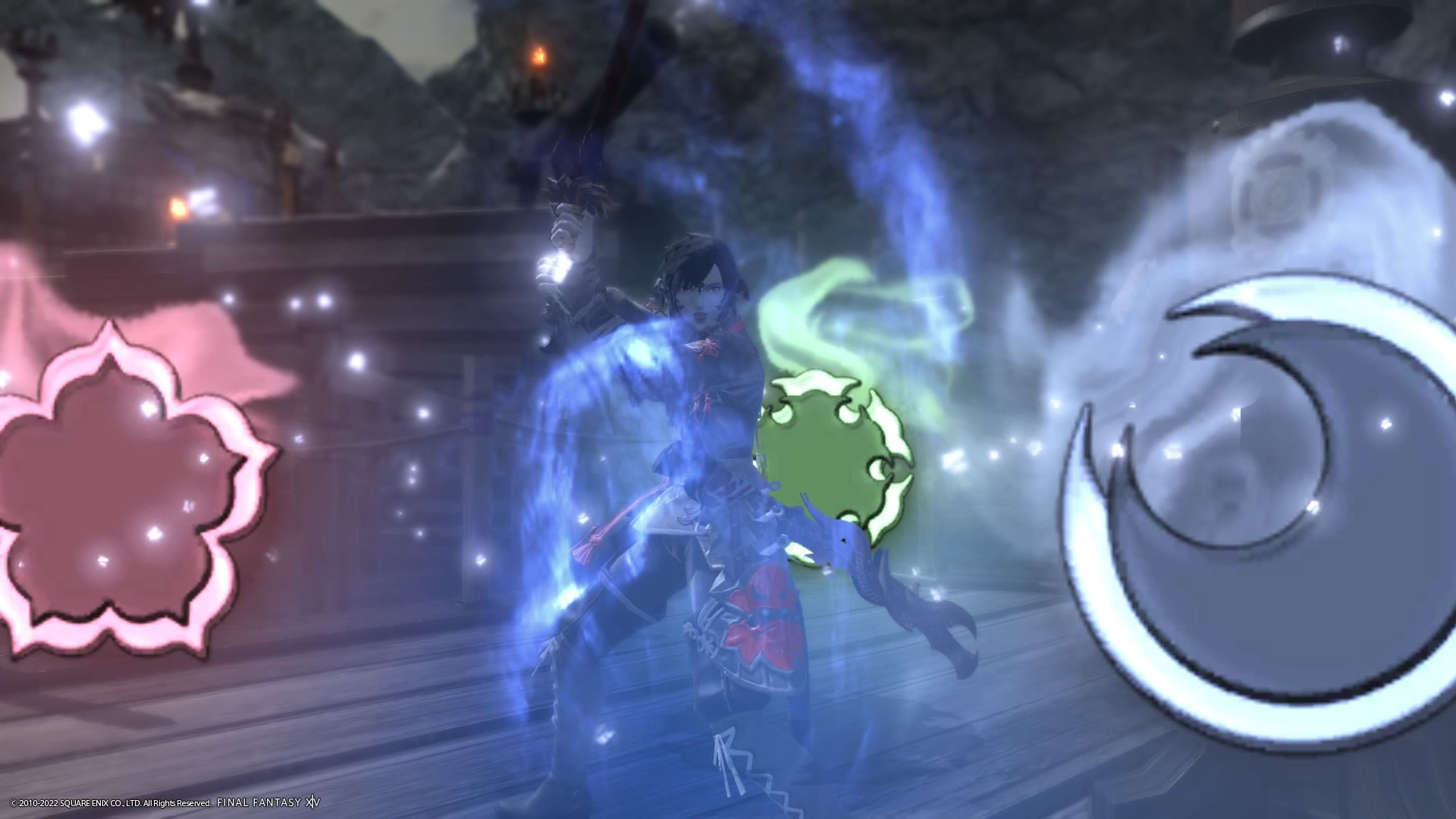 Samurai’s PvP Job actions are relatively simple to grasp if you have experience with playing the job in PvE content. As with the job’s default PvE form, you’ll move through a variety of sword-based attacks, which over time will buff your attack power. You’ll also have access to a few essential high-potency attacks with long recast timers.

In addition to your standard damage-dealing combo, you also have access to Hissatsu abilities, which can increase both your offensive and defensive capabilities in equal measure. Using the two Hissatsu abilities within the right windows to maximize your damage is an essential part of playing this job.

As highlighted in the below section on rotations, the key to playing Samurai in PvP effectively is knowing when to engage each of their varied abilities in a responsive manner. Combos need to be strung together with the correct timing to get the highest possible levels of damage output. 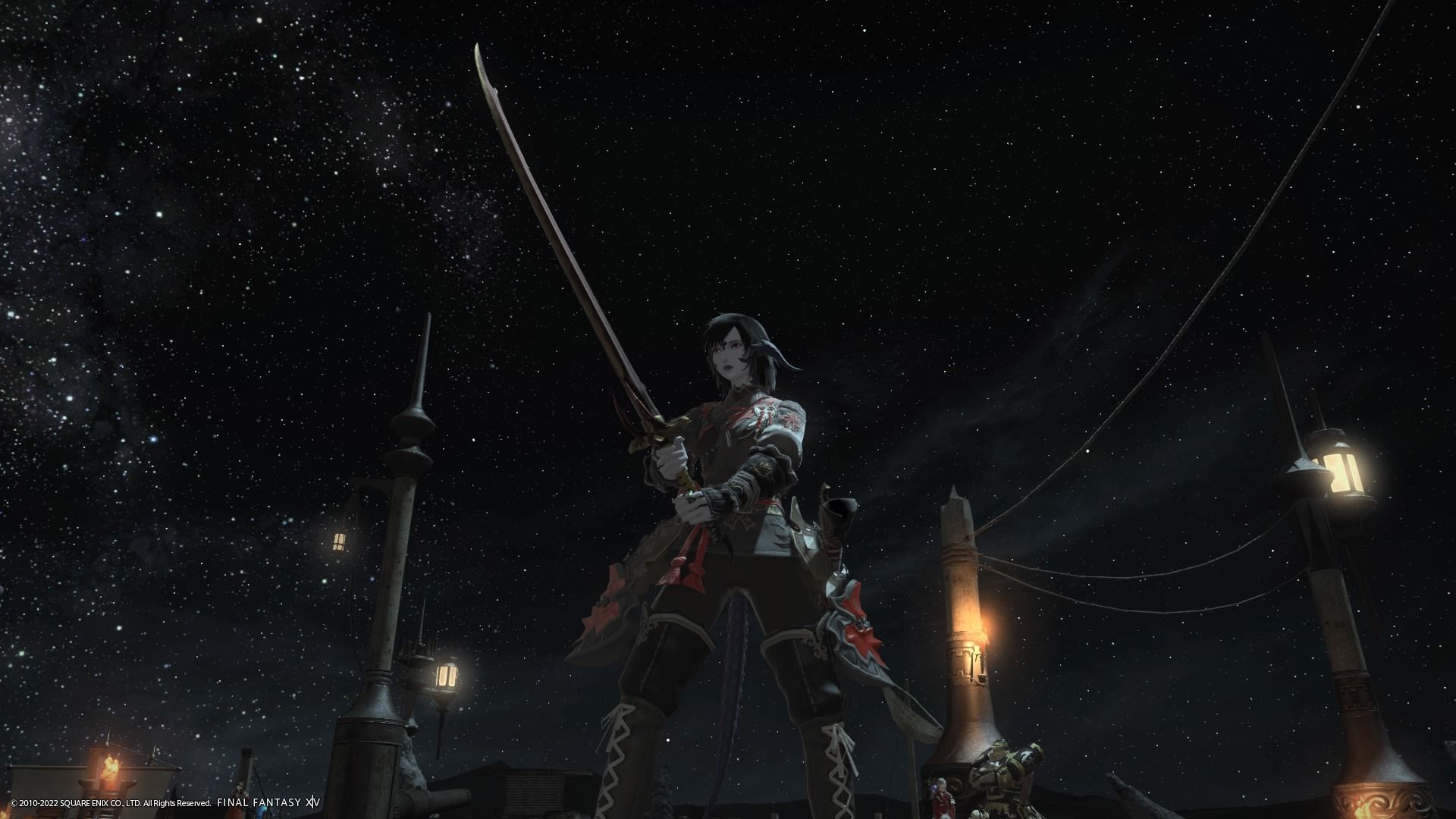 Samurai’s basic single-target combo appears at first to be very similar to their basic attacks in PvE. The ‘Kasha Combo’ will move from the 3,000 potency Yukikaze to the 4,000 potency Gekko and finally the 5,000 potency Kasha.

This sequence of attacks may seem like something you should default to using often, but if you’ve read their descriptions you may realize that the transformed AoE versions of each of these skills provide a lot more utility for the average PvP session, especially in Crystalline Conflict, where players are frequently grouped together.

Whilst this standard Kasha combo can be useful for picking off single players on low health, activating the ability Hissatsu: Soten will not only launch you forward and do damage in a straight line, but also transform the skills of the Kasha combo into more potent AoE weapon skills.

Once you get a feeling for the range, speed, and application of Hissastu: Soten, it becomes a little easier to begin constructing a rotation for Samurai. You’ll soon realise that Hissatsu: Soten is a great way to start off an assault on the enemy team, doing damage and then swiftly following up with one of the three possible AoE skills that it creates: Hyosetsu, Mangetsu, and Oka, all of which can deal consistent damage across multiple enemies.

In addition to being AoE skills, Hyosetsu and Oka both grant useful additional effects. Hyosetsu has a bind effect which can be useful for extending your combo, whilst Oka offers a HP gaining effect.

When moving around, it should become second nature to use Hissatsu: Soten to make this movement both faster and more punishing for the enemy team. It’s also a great way to launch into those aforementioned AoE attacks.

With three charges available from the beginning, there’s no reason not to use this regularly as both an opening attack and a method of escape. In terms of defense after an escape, you can also use the skill Hissatsu: Chiten, which reduces damage taken but also applies the incredibly useful effect.

One of your primary damage-dealing tools, however, is the 20-second re-cast weaponskill Ogi Namikiri, which deals a massive 8,000 potency to all enemies in a cone. This excellent skill has uses in both single target and AoE scenarios, as attacking a single target with this attack will deal an extra 50 percent damage, whilst attacking two or more enemies will create a barrier that absorbs damage equivalent to a heal of 8,000 potency.

The best part about Ogi Namikiri, however, is that it quickly transforms into Kaeshi: Namikiri after executing the attack. As long as you don’t prevent this by casting another skill, Kaeshi: Namikiri allows you to do a quick follow-up attack. When used correctly, both Namakiri skills together will do a combined 16,000 potency, which can often be enough to finish off low-health enemies or weaken them considerably.

Another useful elimination tool is the skill Midare Setsugekka, which you may recognise as the attack that Samurai usually build to in PvE gameplay. In PvP, it’s a lot easier to get to Midare Setsugekka – you merely need to use the skill Meikyo Shisui first.

Meikyo Shisui also grants an additional buff which nullifies status afflictions that can be removed with Purify.

Although Midare Setsugekka still takes some time to cast, it’s a skill worth using, dealing a massive 16,000 potency.

One of the most diverse and useful tools for optimizing the usage of both the Namakiri skills and Midare Setsugekka to eliminate enemies is by using the skill Mineuchi beforehand. This skill does damage equal to ten percent of the HP of the enemy you are attacking, but more crucially, provides a stun that lasts for two seconds. This may not seem long but can give you enough time to successfully cast the aforementioned Midare Setsugekka and lock in that crucial 16,000 potency attack early on in the rotation.

With all the above information in mind, a complete Samurai rotation focused on a single target may look something like this:

Meikyo Shisui is activated before attacking so that you can activate Midare Setsugekka soon after. We then launch into the combo with Hissatsu: Soten, which deals some damage and propels our character towards the enemy, and then stun with Mineuchi.

The stun from Mineuchi gives you enough time to cast Midari Setsugekka, after which you can use Hissatsu: Chiten for its Kuzushi debuff (which adds additional damage to your attacks) and then Hyosetsu for its bind debuff, which should give you enough time to cast the two Namikiri skills. From here, you’ll already have done a lot of damage and you can then finish them off with your Kasha combo skills.

Of course, this is not a universally applicable rotation, especially if your target is able to escape or remove the effects of stun or bind. It’s important to remain flexible, and keep charges of Hissatsu: Soten in order to pursue the enemy at crucial moments. This particular attack can also be used to dash in and out and utilise the AoE forms of the Kasha Combo, as its own more rudimentary form of the aforementioned rotation.

In addition to their rotation, Samurai will need to manage the use of their most powerful skill: Zantetsuken. This limit break is incredibly useful, as when combined with the debuff Kuzushi (from the skill Hissatsu: Chiten), can instantly kill any target by removing 100 percent of their HP!

Because of this effect, it’s difficult to place Zantetsuken within Samurai’s overall rotation, as you don’t want to waste damage-dealing skills with long cooldowns if you have your limit break available.

Even if the target isn’t affected by the Kuzushi debuff, it still does a massive 24,000 potency attack. With this in mind, players should use Zantetsuken selectively: try not to waste it on an enemy that already has a low amount of HP. It is, however, somewhat effective as a ‘panic button’ for making your way out of tough situations even without the Kuzushi buff applied. 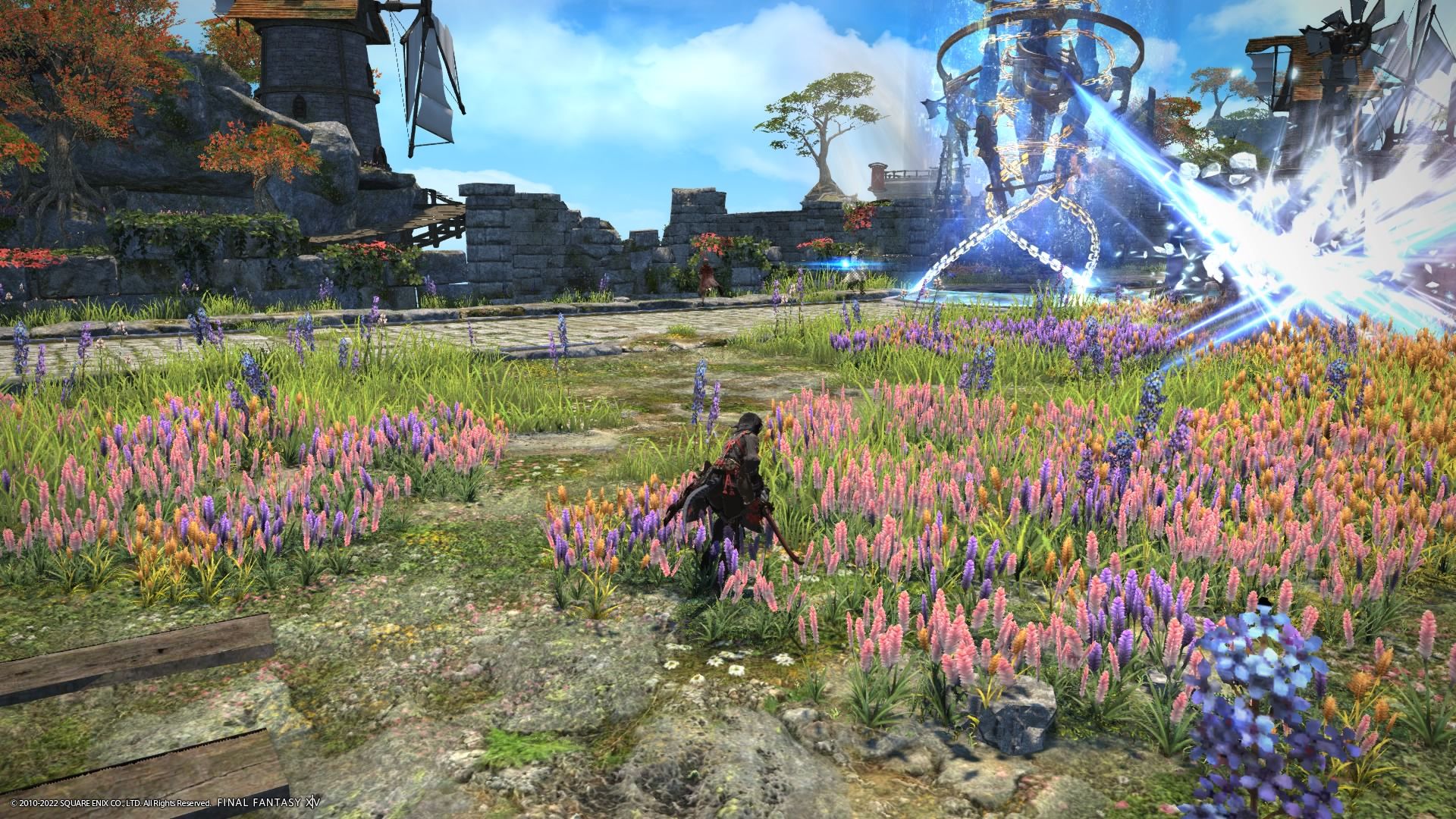 In addition to their array of useful damage-dealing job actions, Samurai also has access to the Common Actions available to all classes in PvP. These are mostly used for recovering health and defending after being attacked. 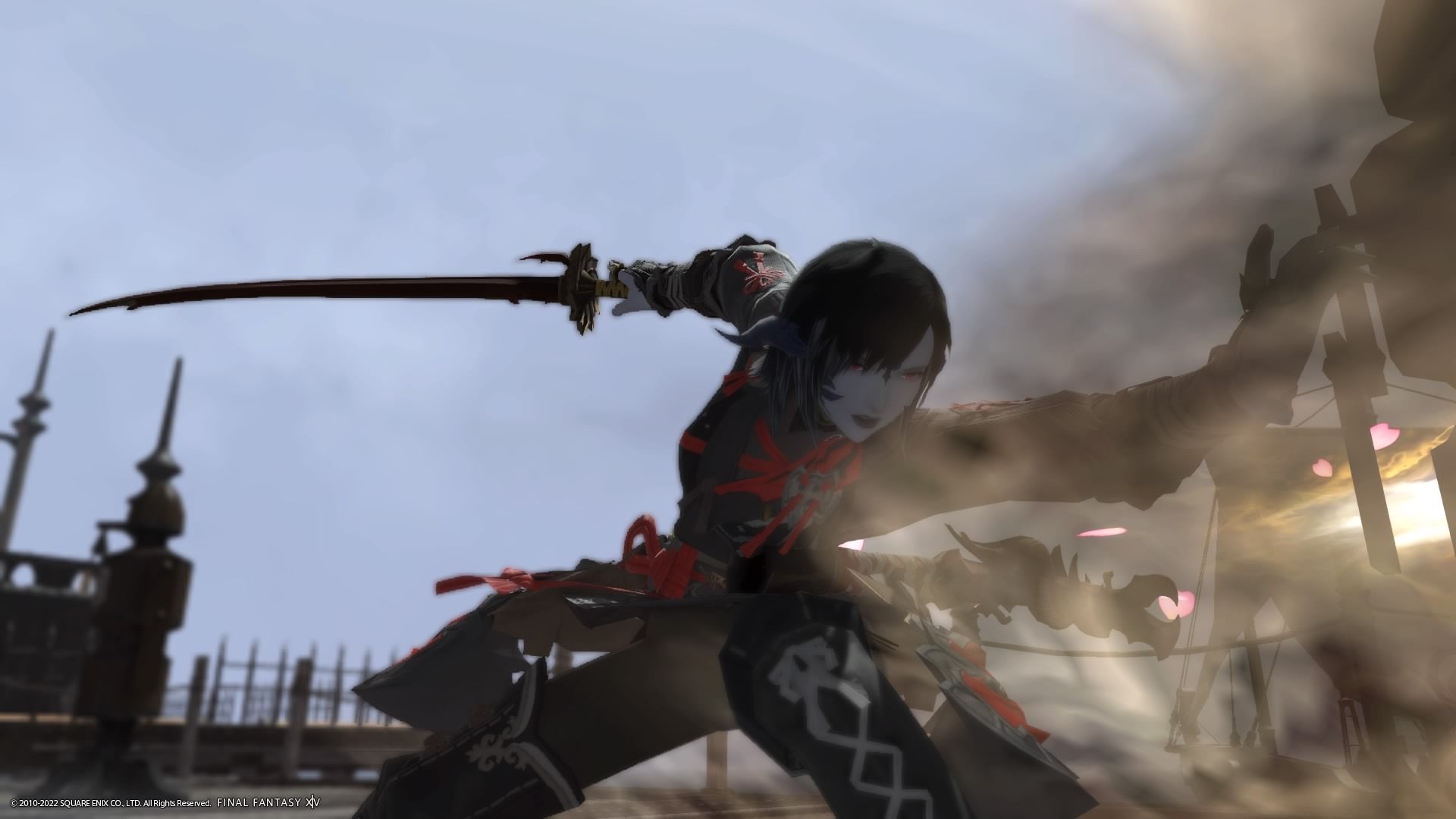 Much like other DPS classes in PvP, the Samurai should aim to not stay too still unless you’re certain you’re going to overpower the enemy you’re in front of. Certain parts of the Samurai’s moveset will require you to be more stationary than you might like, leaving you briefly vulnerable, such as the cast windows for Midare Setsugekka and Oni Namikiri.

If you want to make yourself harder to target as a Samurai, you’ll need to make appropriate use of the skill Hissatsu: Soten, in addition to the sprint and guard skills to make sure you’re keeping yourself safe. Don’t forget your common actions for healing yourself should you get caught – pop out using Hissatsu: Soten then heal or purify accordingly before engaging again.

Samurai – not unlike Monk – are particularly useful when following the rest of the group and waiting opportunistically for members of the enemy team to fall out of formation. You can use the rotation we’ve suggested to quickly take down these lone members to a low amount of health very quickly, which will either ensure your own successful kill or an assist.

In situations where you don’t feel confident that you can pull off your full combo or even just a couple of AoE skills in a row, you can also use Samurai’s skills that stun or bind to assist a teammate. Even though they don’t last long, these debuffs can be essential in hindering the enemy team’s progress towards the objective and allowing your teammates to develop kills on particularly menacing enemies.

The true value of Samurai, however, may be within their Limit Break, which can allow them to take on the role of a one-shot assassin. When you consider that all you need to do to successfully get a kill is apply Kuzushi with Hissatsu: Chiten and then use the Limit Break, suddenly, Samurai becomes a whole different game.

Getting this two-hit kill can be harder than it seems, however, thanks to the wide range of abilities in PvP that can prevent you from casting the skills consecutively enough for it to work. Kuzushi only lasts for three seconds, so you need to be far quicker than your opponent's ability to respond when applying the Limit Break. Sometimes, this isn’t possible.

For this reason, even if you’re focusing on getting kills using your Limit Break, you should still rely on a solid foundation of damage from skills such as Oni Namikiri, Midare Setsugekka.

Remember to use your skill Mineuchi for a vital stun in order to cast Midare Setsugekka without interruption.

The basic Kasha combo in either form should mainly be used in service of chipping away at an enemy's health or tacked on to the end of the long rotation highlighted in the previous section. If you're only using these attacks without engaging your higher potency abilities, things could end very quickly. In Crystalline Conflict and Frontline, this kind of play will quickly put your team at a disadvantage.