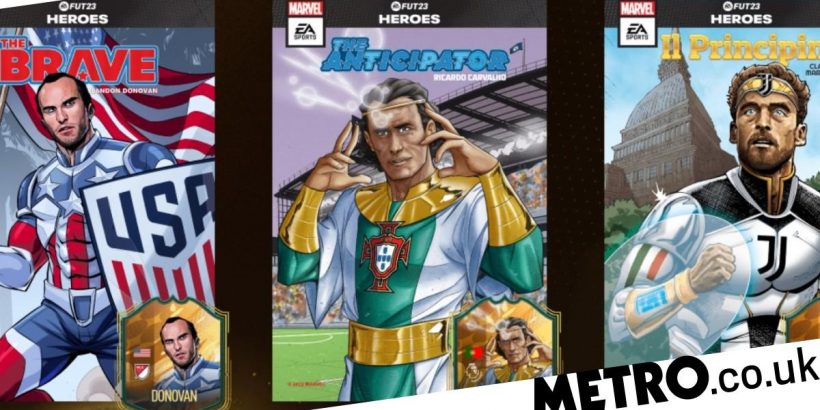 Marvel has made special new superhero designs for FIFA 23’s FUT Heroes cards rather than dress the players up as its own characters.

Remember those rumours of a FIFA 23 and Marvel Comics crossover? Well, EA has now announced what it is and it’s nothing as bizarre as adding Spider-Man and Iron Man as playable footballers.

Instead, it’s less of a crossover and more of a partnership, with Marvel contributing original artwork for FIFA 23’s FUT Heroes cards, for the game’s Ultimate Team mode.

As a reminder, FIFA 22 first introduced FUT Heroes, which are essentially alternate cards for players with artwork meant to evoke superhero comic covers.

FIFA 22’s cards were presumably handled internally at EA, so it enlisting Marvel to do the artwork for FIFA 23 is perhaps meant to add a bit more prestige and authenticity to the whole thing.

‘EA Sports and Marvel are uniting to bring more of football’s fan favourites back to the pitch in FIFA 23, transforming FUT Heroes into Marvel Super Heroes,’ reads the official website, where you can see all five designs.

That statement suggests that the players are meant to resemble specific Marvel heroes but, as far as we can tell, they’re essentially original designs. Donovan’s design clearly evokes Captain America, but he’s not wearing the mask or even holding the traditional circular shield.

Ji-sung’s look may be Iron Man inspired, considering he’s wearing power armour, but the name is closer to the character Ironheart, who will be making her movie debut in the Black Panther sequel Wakanda Forever.

We have no idea who the other three are meant to be. In fact, the orange and green colour scheme for Touré’s outfit reminds us more of DC superhero Aquaman’s classic attire.

The plan is to have these superhero designs replace the actual player photos in-game for FIFA 23’s World Cup mode, which will arrive after launch at an undisclosed date.

This may not be the only collaboration between the two companies either. It’s been rumoured that EA is working on both an Iron Man game and a Black Panther game. Which are certainly more exciting prospects than whatever this FIFA collab’s meant to be.