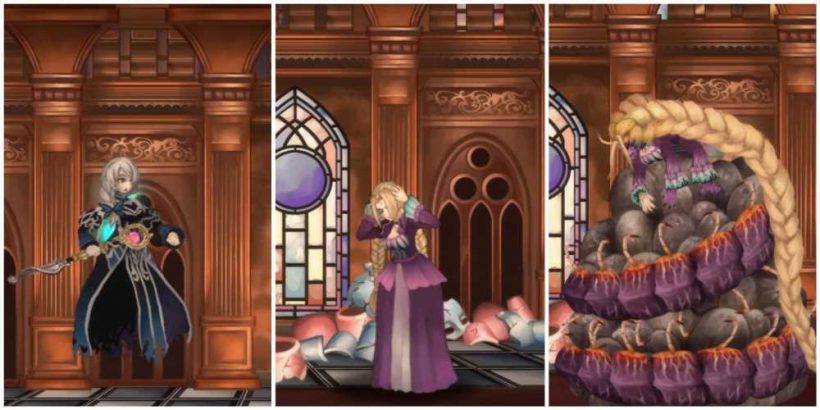 The second major encounter you will have in Fallen Legion Revenants is the lady whose name has been thrown around a fair bit. Whether that be in the narrative weavings of Welkin, the enemy design of the Miasmic hordes, or even just the name of a boss's special move. Of course, we are talking about the long-awaited Cathering Ashdown.

The “Mother Of The Harvest” is quite the formidable foe bringing attacks that are well and truly unique to her. She is large, menacing, and frankly, absolutely bonkers. She is the culmination of unchecked ambition, wealth, power, and mystical mind-warping death-mist. We’d even go as far as saying this fight is rather disturbing. 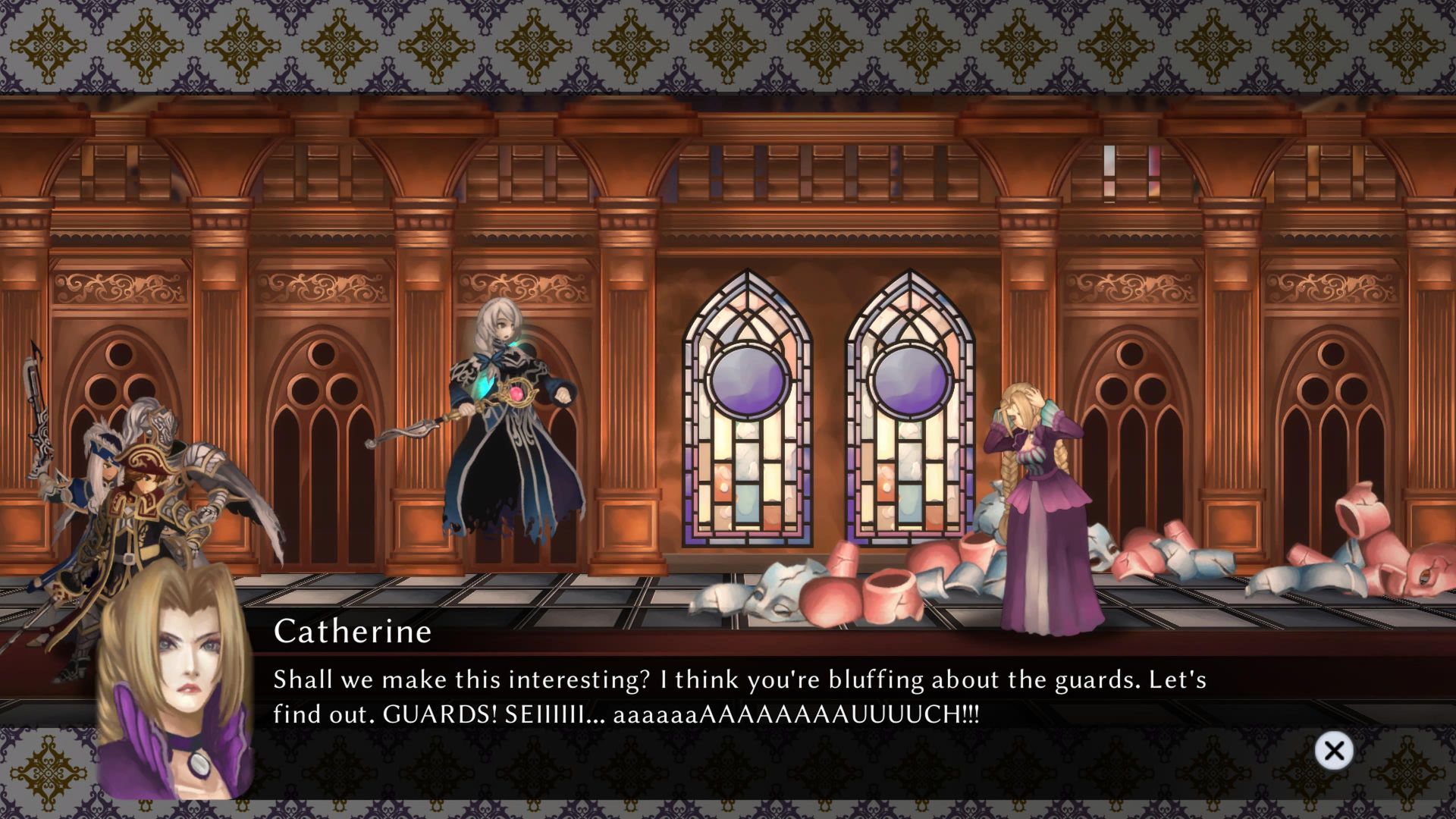 Catherine is one of the many nobles who did not flee to Welkin. Despite this, she retained her grip on power and uses said power to ship supplies to the last healthy remnants of humanity. This has led to her people rotting and dying to the Miasma, and inevitably, her collapse into late-stage affliction.

Of course, Catherine’s power was all just an illusion. She was being manipulated by Ivor and in fact, helped solidify a tyrant's grasp on the last vestiges of the human race. In exchange, he damned her with a false promise of fertility. Upon seeing Rowena, her madness finally overwhelms her and a monster is born in her place. 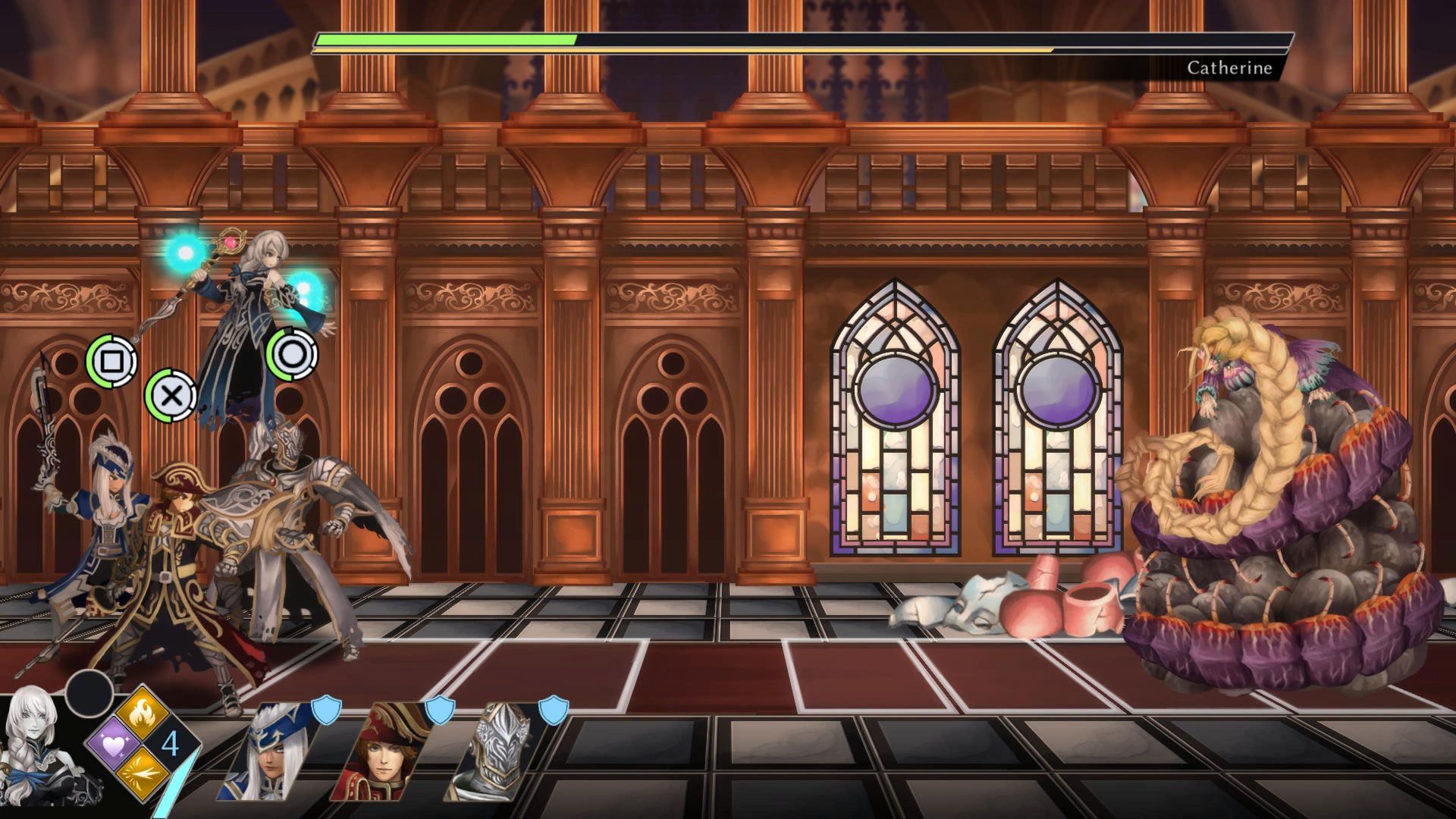 Catherine is an interesting boss. She has attacks, and these attacks are fairly dangerous – heck they are downright awkward – but the crux of her offensive comes from the puppet children she spawns. These are her greatest strength and her inevitable downfall.

Catherine, being a major Chapter-ending boss has three phases, with each phase increasing her aggressiveness, and health, and slightly altering her moveset. 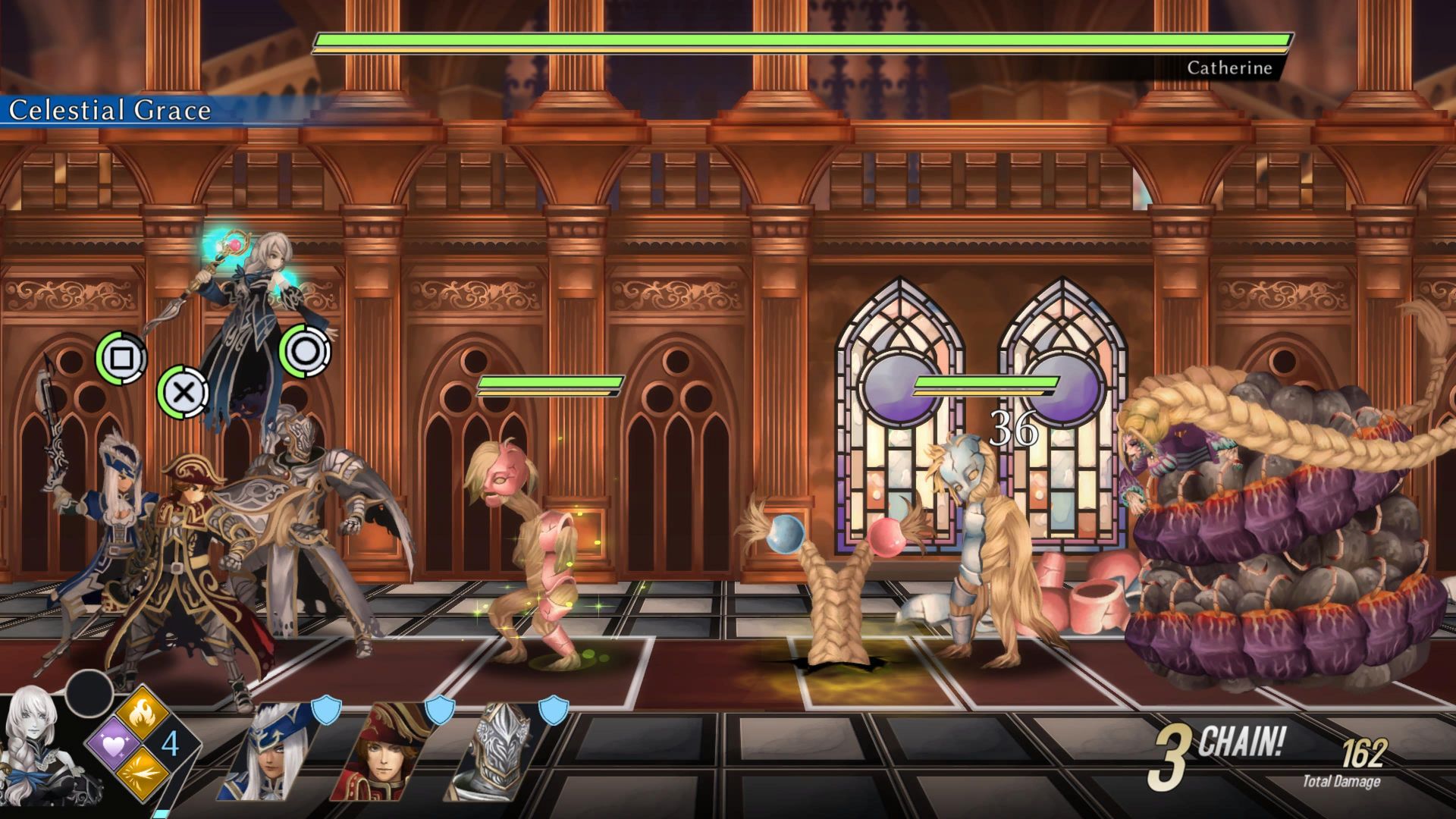 How To Deal With Catherine’s Children

You have three ways to deal with Catherine’s Children, with each being viable. That doesn’t mean they are equal in effectiveness or ease of use, of course. The first is the most obvious – Perfect Parry their attacks, and counterattack. Depending on your party, it should take two Perfect Parries per child to kill them.

Another way you can deal with them is by exploiting their weakness. Both Catherine and her kids are weak to electricity. You should have access to several Electric Deathblows, with Zulifqar being the most obvious with his Lucent gear. A single blast from this will stagger the Children, and leave them wide open for a quick kill.

The best way to kill them, in our experience, is to use Push and Pull Deathblows and Magic to move the Children into the strange beaded totem that spawns with them. This will instantly kill the Children. Not only that, but Rowena’s magic will pass through Catherine whilst her Children are alive, allowing you to easily manipulate their positioning without relying on specific Exemplars and Deathblows.

How To Break Catherine

In Phase One, Catherine will Break like any other enemy. She doesn’t have much BP, her regeneration is not fantastic, and her HP is shockingly low. Attack her until she breaks, then ends the Phase.

Phase Two onwards is a bit trickier as Catherine has very high BP regeneration and her HP is much higher to boot. To Break Catherine, you need to kill both of her Children. This will instantly Break her, allowing you to unleash a devastating flurry of attacks.

Which Exemplar’s To Use

Any group of Exemplars can work in this fight, but we would recommend that you take Zulifqar at the very least, and one Melee DPS. Aleister, Solomon or Kali are excellent for this. Your last slot is great for a ranged attacker – ideally with a Deathblow that can reposition units.

The reason we want Zulifqar is because of his access to Electric attacks. Catherine and her kids are weak to this element, allowing you to deal massive damage with ease by bringing Zulifiqar’s Lucent gear. Kali is also good for this as she has access to an Electric Deathblow too – however she is locked behind story progression. 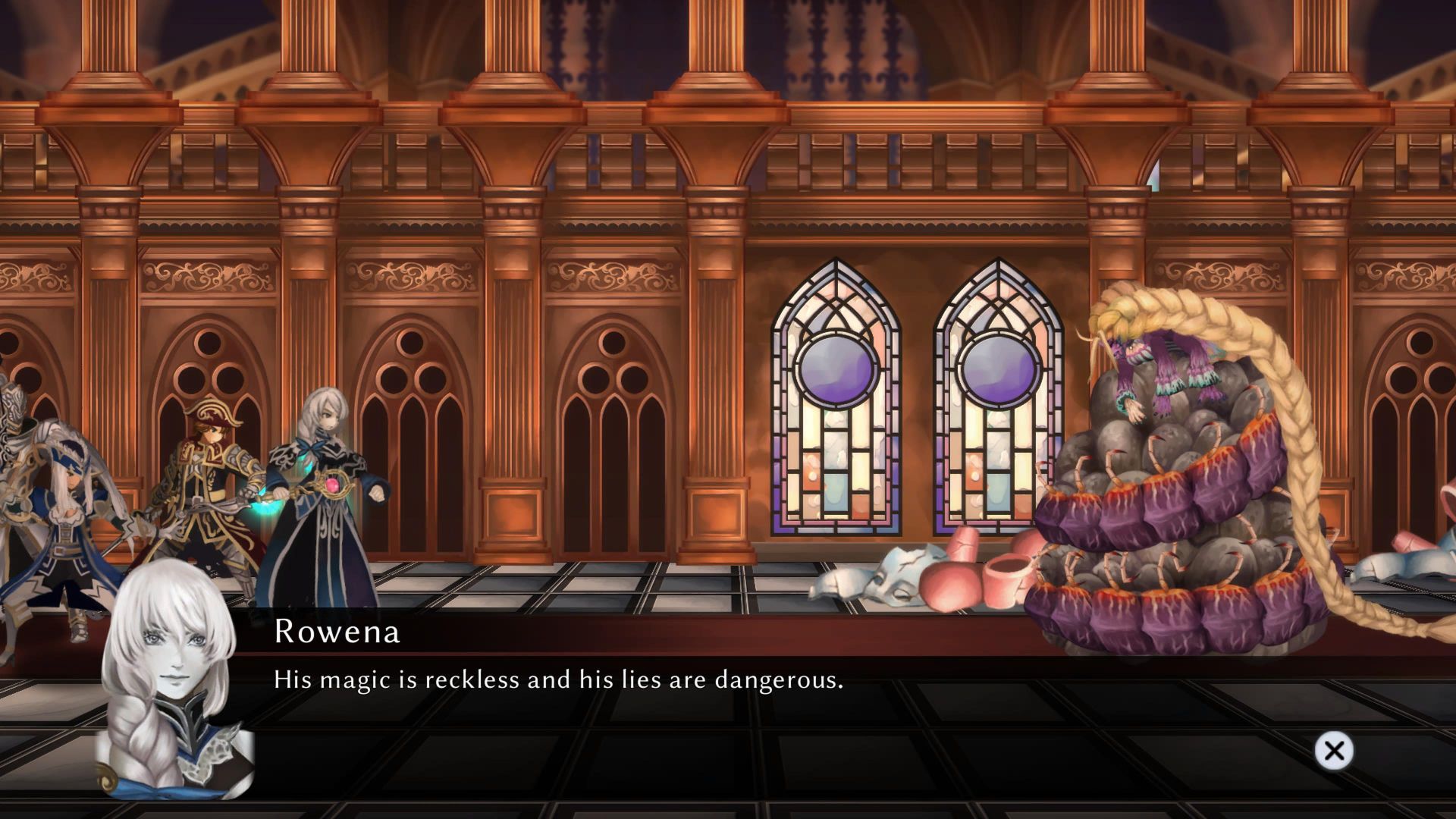 Catherine is all about knowledge, so we won’t repeat everything we have already covered in as much detail. Phase one, attack her until she Breaks, then ends the Phase. In Phase Two, use magic to Push/Pull her children into their Totem to instantly kill them, and then lay into Catherine with everything you have. Remember she will always use her Piercing Wind to recover from a Stagger, so be prepared to Block. Phase Three, watch out for her Breath Attack, but other than that, continue doing what you did in Phase Two.

An awful lot is going on in this fight, but going in with pre-existing knowledge on how to kill her and overcome her gimmicks makes a massive difference here. It is less about reflexes and performance, and more about using mechanics to bypass the challenge in interesting ways.

With Catherine down, you can move on to Chapter Three.