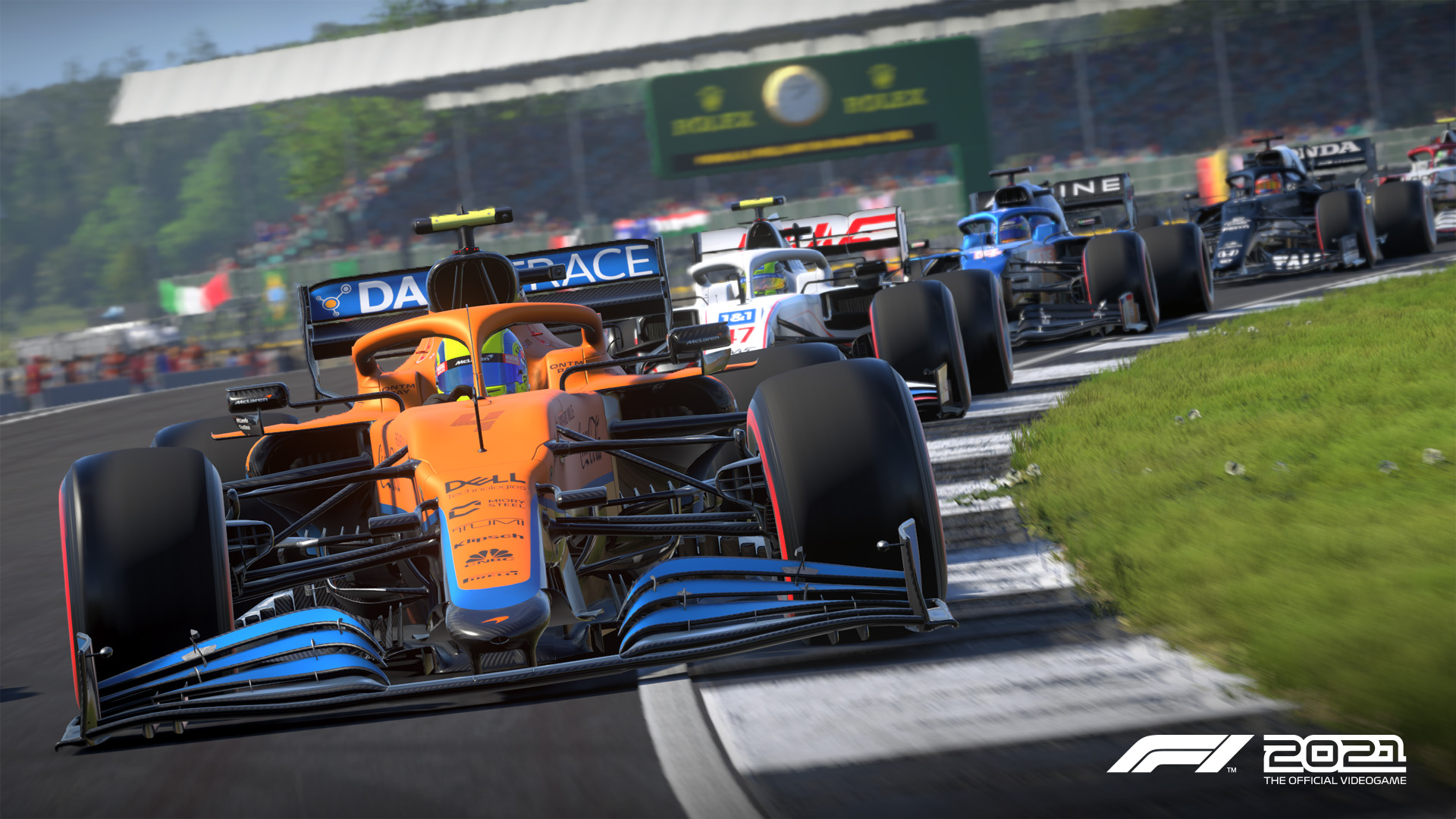 Codemasters’ Formula One boss gives an in-depth look at this year’s new F1 game, including cross-gen multiplayer and a two-player career mode.

Formula One is the undisputed pinnacle of motorsport, which means that no racing game is more hotly anticipated than the annual, officially licensed, F1 game, especially since for the past 10 years those games have been developed by revered driving game specialist Codemasters.

However, when COVID struck Codemasters’ yearly task became a lot harder. Previously, each year’s F1 game simply involved making something that resembled the real-life Formula One season as closely as possible. But the ravages of the pandemic have meant that Formula One’s once set-in-stone calendar has chopped and changed, with scheduled races cancelled and others added – even now, after six races of the 2021 season, there is uncertainty regarding the venues of scheduled races in October.

In advance of F1 2021’s July 16 release, we interviewed Lee Mather, franchise game director of F1 at Codemasters. Among other things, he talked us through a raft of new features Codemasters is adding to the game, including a story mode entitled Braking Point, the ability for two players to co-operatively negotiate the game’s career mode, and cross-generational multiplayer.

Mather kicked off by picking out what he sees as F1 2021’s key new features: ‘The big feature changes for F1 2021 are obviously the story mode, Braking Point: that’s something new for us. We dipped our toe into the water in 2019, if you remember, with the F2 feeder series. That was our first attempt at something narrative, with a bit of character and drive to it. Braking Point is a full narrative, with strong characters and visuals. That is probably the biggest headline for 2021.

‘Then, also, the two-player career is a big one for us. We know how players don’t necessarily always want to go online, because it’s a very competitive space. But to play co-operatively with a friend against the game, I think, is something that is very compelling. And then we’ve continued to refine the likes of My Team, by bringing in department events. We’ve got expanded customisation, we’ve worked on platform support – so now you can play on previous-gen and next-gen consoles as well.’

So, how exactly will the two-player career mode work? Mather explained: ‘You are essentially in a two-player multiplayer lobby with a friend. You will set somebody up as the host. Then there’s a choice that the host will make: do you want to play with contracts? If you’re playing with contracts, you could both go into the same team, or you could both go into separate teams, but the contract system is in play. So you might find yourself moving to another team, or you could start in separate teams and at some point come together, if that’s what works out best through the contract system.

‘If you’re playing together, obviously one player is going to handle the R&D and the press questions and things like that, but it’s all done live, so while one player is interacting, the other player just waits for a while as that’s happening. If you choose to play without contracts, this is where you essentially just team up as a pairing: you’ll pick your team, you’ll compete as a pairing and you won’t deviate into other teams. But in both cases, you’ll get the rivalry, you’ll get the R&D, you’ll get the Meet The Press: all those things that are part of the single-player career will be experienced by both players.’

For those who enjoy the multiplayer side of F1 games, F1 2021 will be the first game to support a level of cross-generational play between PlayStation 4 and 5 owners, and between Xbox One and Series X/S owners. Mather provided further details: ‘We’ve got cross-gen multiplayer in the game this year. That was one of our main goals, to allow a PlayStation 4 player to play with a PlayStation 5 player, and an Xbox Series player to play with an Xbox One player. You can’t play PlayStation-Xbox, but you can play within the infrastructure that you’re playing in. I think, as we’ve seen with the limitations on the amount of consoles available, that’s definitely been the right decision. So, for example, if my friend still can’t get hold of an Xbox Series X like mine, but has an Xbox One, we can still take part in the two-player career quite comfortably.’

Tweaks to R&D and practice sessions

Existing F1 game enthusiasts will find a number of aspects of this year’s instalment that have been tweaked or rethought. Mather discussed, for example, changes that have been made to F1 2021’s role-playing style R&D tree: ‘Previously, we had this sort of RPG skills tree-based system, but the functionality remains the same, while the presentation is different. We wanted to change it to more of a strong visual style, so you could see what you’re unlocking – you can see a wing coming in, or a turbo component.

‘But it was done for another reason as well: we’ve mixed up how our practice programmes work. Now, not only have we reduced the number of practice programmes, but we’ve tied in what we term performance boosts to them. So now, in a practice programme, if you achieve certain other goals that the team have set for you, you’ll get a booster which will drive down the cost of some of those items, and it just ties those two systems together better, with a better visual presentation.’

Mather also revealed that Codemasters has addressed one aspect of F1 2021 which had previously divided fans; in the career mode, gamers were rewarded with points to spend on R&D for taking part in practice sessions, but often preferred to skip practice sessions at circuits they knew. Mather said: ‘We’ve now added a Quick Practice, where players can simulate a practice session. But instead of it just being a case of, ‘Simulate practice: I don’t particularly want to do this session’ you actually get to specify what the team are going to do with a little time-based mini-game.

‘So it’s a case of, ‘I want the team to focus on this’ but there’s obviously a risk involved, if you try and give them too many tasks things might not get delivered. So, for players who don’t necessarily want to race during a practice session, they can still benefit from the development boosts and the development of the car by using the mini-game to set the session structure.’

At launch, F1 2021 will contain 20 tracks, with a further three – Imola, Jeddah, and Portimao – to be added via DLC at an unspecified time post-launch. Mather explained Codemasters’ policy towards the shifting sands of the Formula One season’s calendar: ‘We did what we’ve done in previous years, which is that we have to have a cut-off point where we commit to what we’re going to build. And obviously we spoke closely with Formula One, but they don’t control what’s going on in the world at the moment.

‘Thankfully, one of the new features in the game this year really does help us as well. So, if there are any other changes in the calendar now – which obviously we won’t be able to accommodate if we don’t have that circuit available to us – then if you play with the Real Season Start, you can start your season and play through from any point during the live season, where the points in the championship will be your starting point.’

Next gen versus current gen

Obviously, any game which allows current gen gamers to play online with next gen gamers is very much going to straddle console generations, rather than being designed for the Xbox Series X and PlayStation 5, then crunched down for the previous generation. Mather talked us through how the experience of playing F1 2021 will differ on the two console generations: ‘We’ve made sure that players on any platform will get parity in terms of the features that are in the game. But we have been able to push the visuals a little more on the new platforms.

‘The biggest difference would probably be that, for the Xbox Series X and PS5 players, they will have a performance versus graphics mode, so they can choose to run at 120fps or they can run at 60fps with improved visuals. And the visual impact of damage on vehicles – while the physics will be the same and what you see on the multifunctional display will be the same, so it’s got parity – you will get improvements in the visuals. Things like the grass around the circuits, you’ll see the density of that change. You’ll see more visual fidelity in things like the way the track surface looks.

On the next gen consoles, Mather added, ‘We use ray-tracing in the front-end and in replays – in any of the shots that are literally not the actual live on-track experience when you’re racing: that’s where we haven’t yet pushed into ray-tracing. When you’re looking at the intro sequences and things like that, and when you’re in the front-end of the game and you’re looking at cars, when you get the intro to My Team, for example, it really showcases it there. If you’re watching a replay, you’ll get to experience it there as well.’

This February, Electronic Arts completed its purchase of Codemasters. We asked Mather about what has changed now that Codemasters is part of the EA empire: ‘It’s all gone really smoothly, it’s been really nice. The obvious implication is that there are a lot of people to meet and a few extra meetings on the calendar. But obviously F1 2021 was significantly into its development. The plans for the future have always been in place, we haven’t just suddenly thrown out of the window what we had planned for the series when we were Codemasters.

‘But what has really happened is that we’ve been presented with all of the toys that EA have got. It’s pretty amazing when you see a company of that scale. They’re there to support the game teams with really strong services. That’s something we’ve been presented with by multiple departments, and we can then pick and choose which ones we think benefit Formula One and which ones we think can help us to build a bigger, better F1 game. That’s been really exciting.’