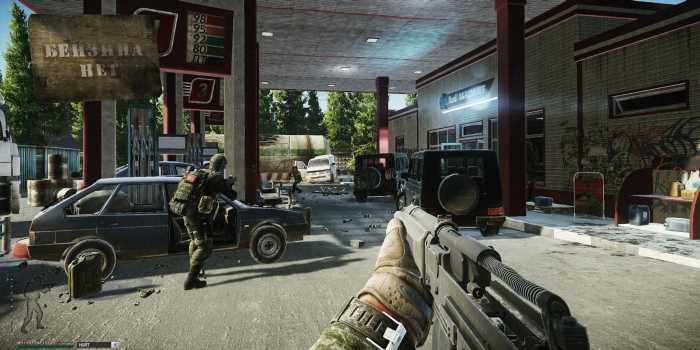 BattleState Games has been banned from Twitch. As of January 1, the Escape from Tarkov developer’s channel now advises Twitch users that it is "temporarily unavailable due to a violation of Twitch's Community Guidelines or Terms of Service." As is typical for Twitch, no reason for the ban was provided, but fans believe it has something to do with one of the BattleState devs brandishing an Airsoft gun at another dev’s head.

As noted by ComicBook.com, this isn’t the first time BattleState has been banned from Twitch. Several years ago, BattleState received a similar ban for playing out a fake suicide. It was a bit for a livestream, but Twitch didn’t take too kindly to the amateur acting, and the Escape from Tarkov devs had to take a timeout from the streaming platform.

Tarkov fans have taken to posting the hashtag #FreeBSG on Twitter in an attempt to get Twitch to rescind BattleState’s ban. However, BattleState seems to have at least gotten around the ban by rebroadcasting what would have gone on its main channel in the "sherpahub" channel. Affiliated Twitch streamers are also still broadcasting and qualify for Twitch drops.

In even more bizarre Twitch news, streamer Asmongold went on a rant comparing the Andrew Tate arrest in Romania to the persecution of Martin Luther King by the US government. He said that there was at least a "50 percent" chance that Tate was being "fucked with," citing the FBI and CIA's attempts to discredit and eliminate MLK during the civil rights movement of the 1960s. Tate has been arrested on human trafficking charges.