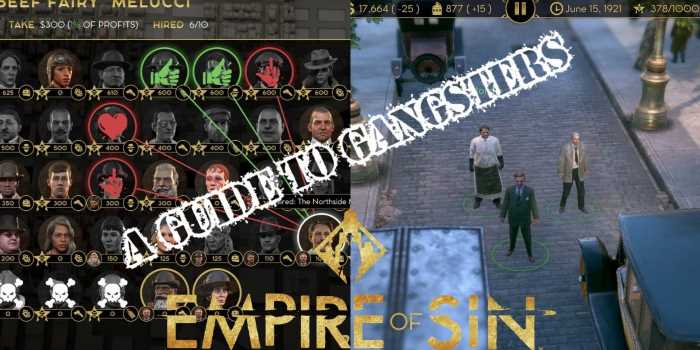 When taking over Chicago in Empire of Sin, you need to have a crew of gangsters by your side who are ready to do anything for you. This aspect can be confusing, as there is so much that goes into it. You have to not only understand how to hire and promote them, but you also have to know how they will benefit you in the long run.

Luckily, there are a few tips and tricks that will take your gameplay to the next level as you end up with the best crew around. You will be taking over neighborhoods with your gangsters in no time in Empire of Sin as you band together with the best that Chicago has to offer. 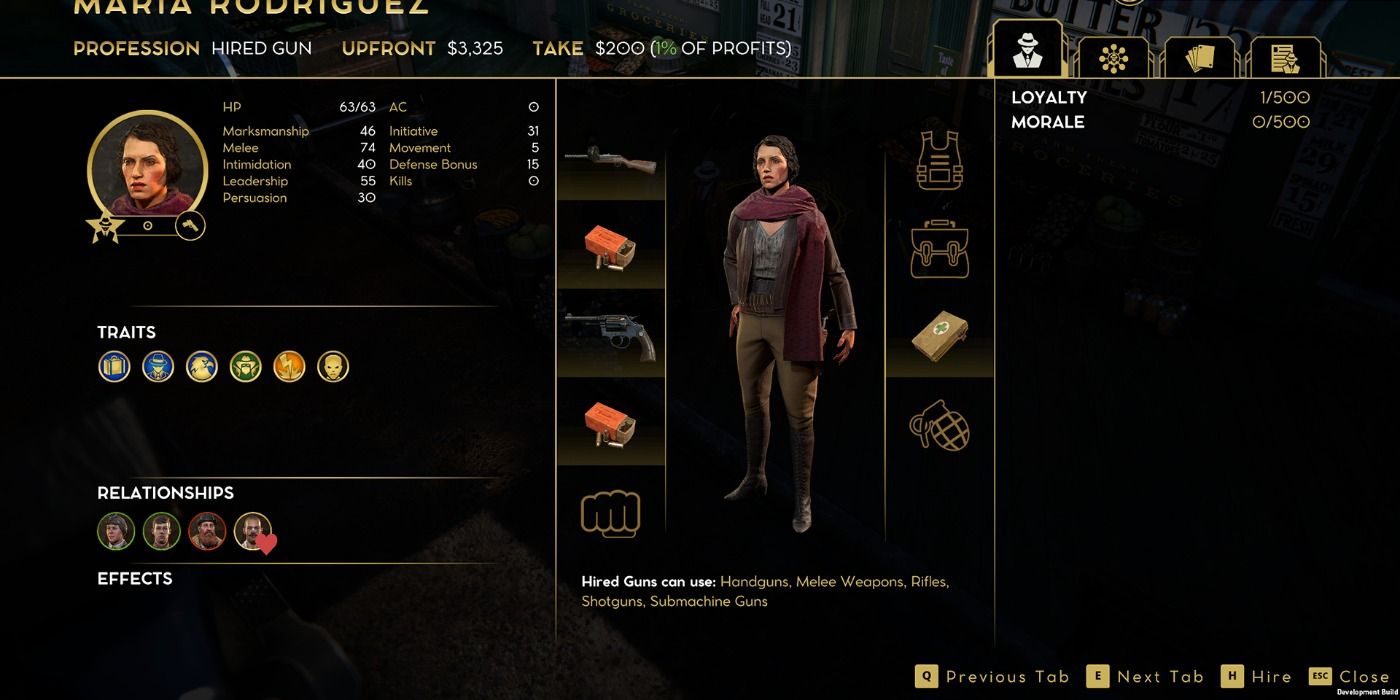 Gangsters are those who will join you in your venture to become the biggest mob boss in Chicago as you take part in turn-based combat. You can assign them different roles and they aid you in fights against other mob bosses and when you take over buildings. Some are better than others, and there are all different types to choose from, but you can only have ten in your crew at a time.

How Do You Hire Them? 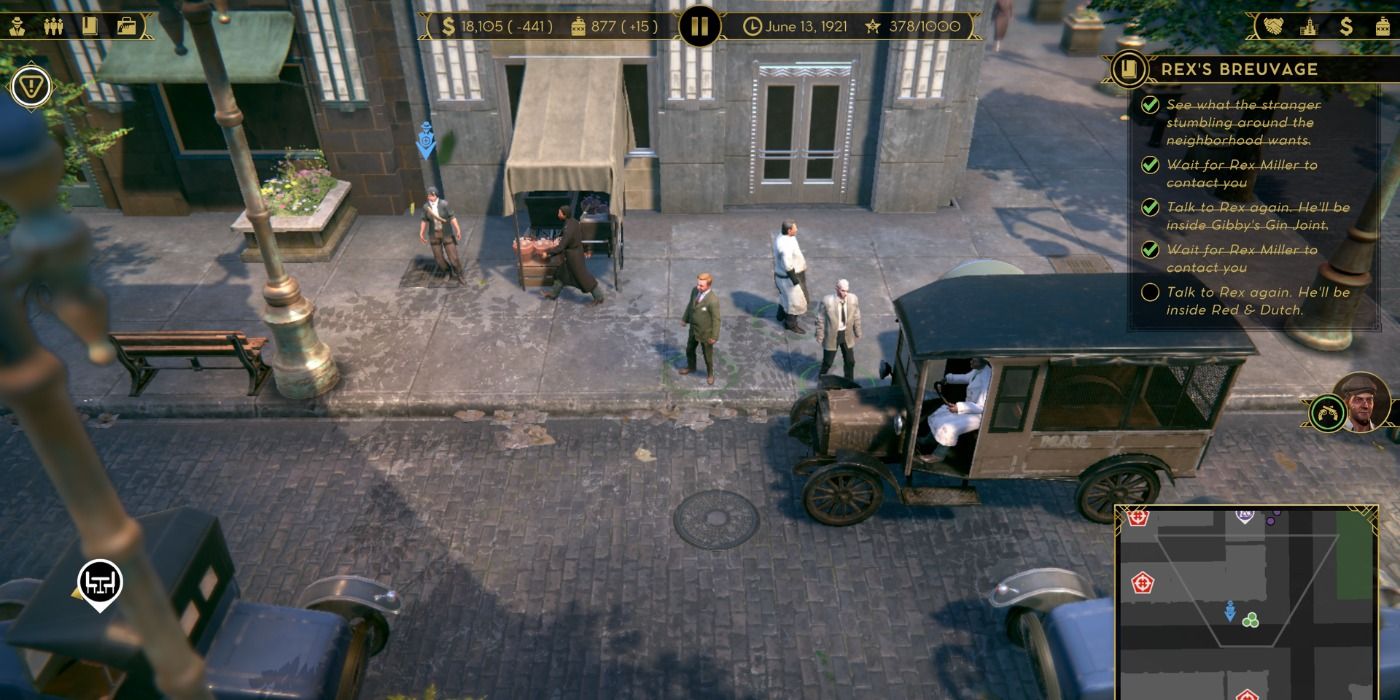 It is quite easy to hire a new gangster as all you have to do is go to the Black Book Tab in your radial menu. You will then see a list of over 50 gangsters who you can hire, but some require a certain degree of notoriety.

You can click on those whose pictures are not in black and white and then click the button to hire them, which is indicated in the bottom right-hand corner of your screen. There is also a method of finding the blue markers on your map and talking with the gangsters personally in order to hire them, but this is the more difficult way to go about doing this. 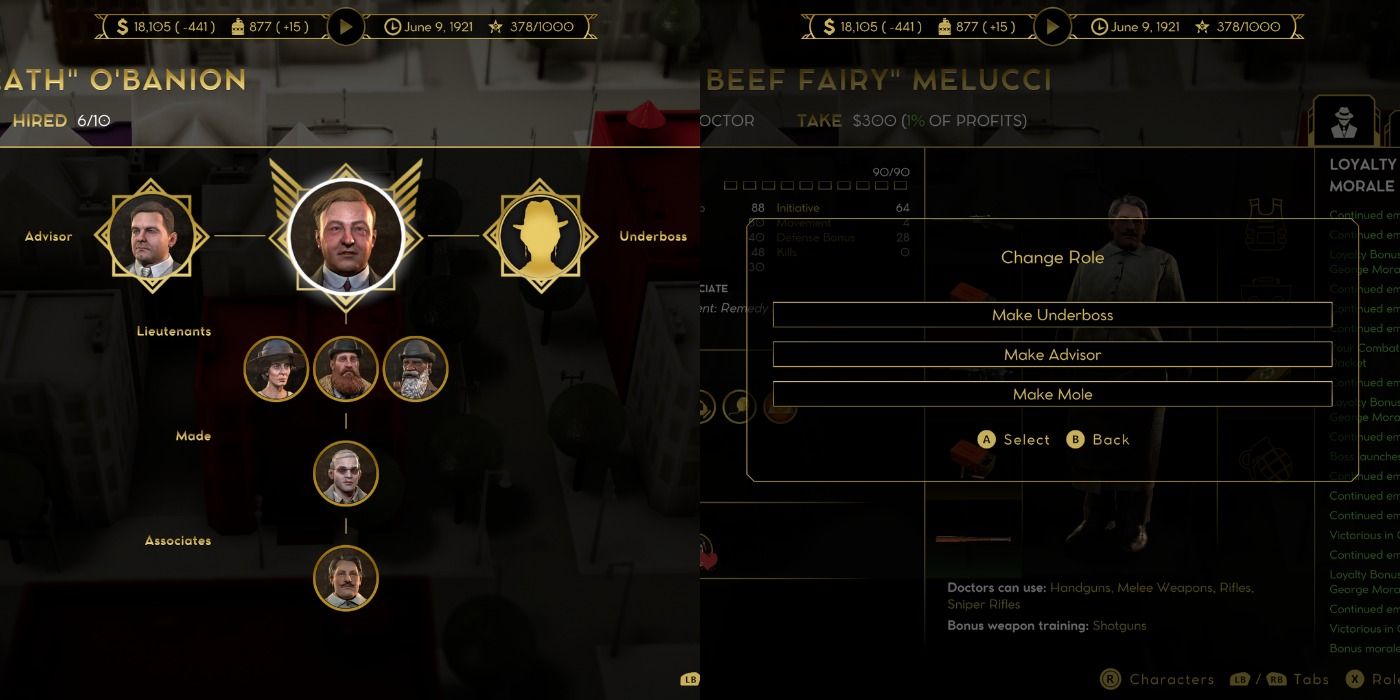 When choosing a gangster to hire you should consider what role they are going to play in your mob. If you place a certain gangster in a position then they will grant you a specific bonus depending upon their own attributes.

The roles you can assign your gangsters are as follows:

One thing to keep in mind is that moles will perform different tasks depending upon the type of gangster in the position in this strategy RPG. They will infiltrate a rival faction, but they have an agenda to follow while on the inside.

Here are what the different types of gangsters will do when selected to be a mole: 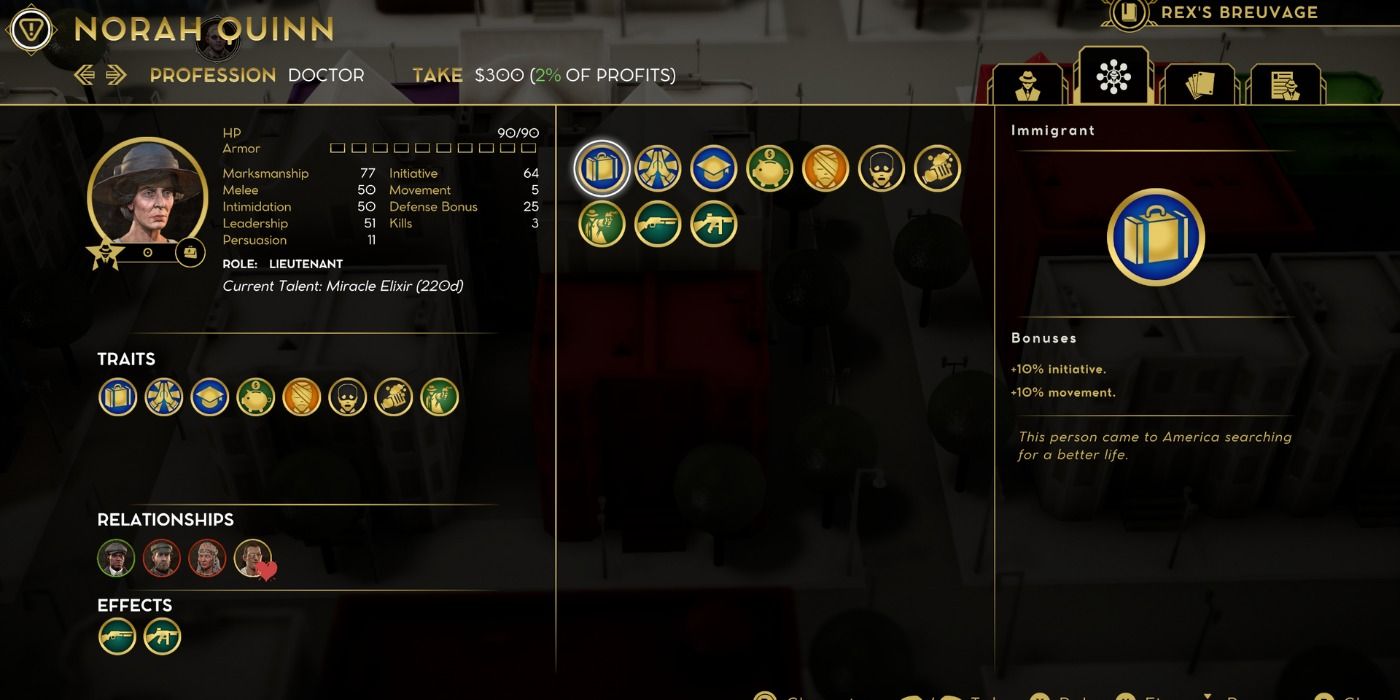 The gangsters each have a set of traits whose values can increase or decrease depending on what happens to them while they are in your gang. These are on the left-hand side of their profile and identify things like how they will perform in a fight and their ability if put in a leadership position.

The different traits your gangster has are as follows: 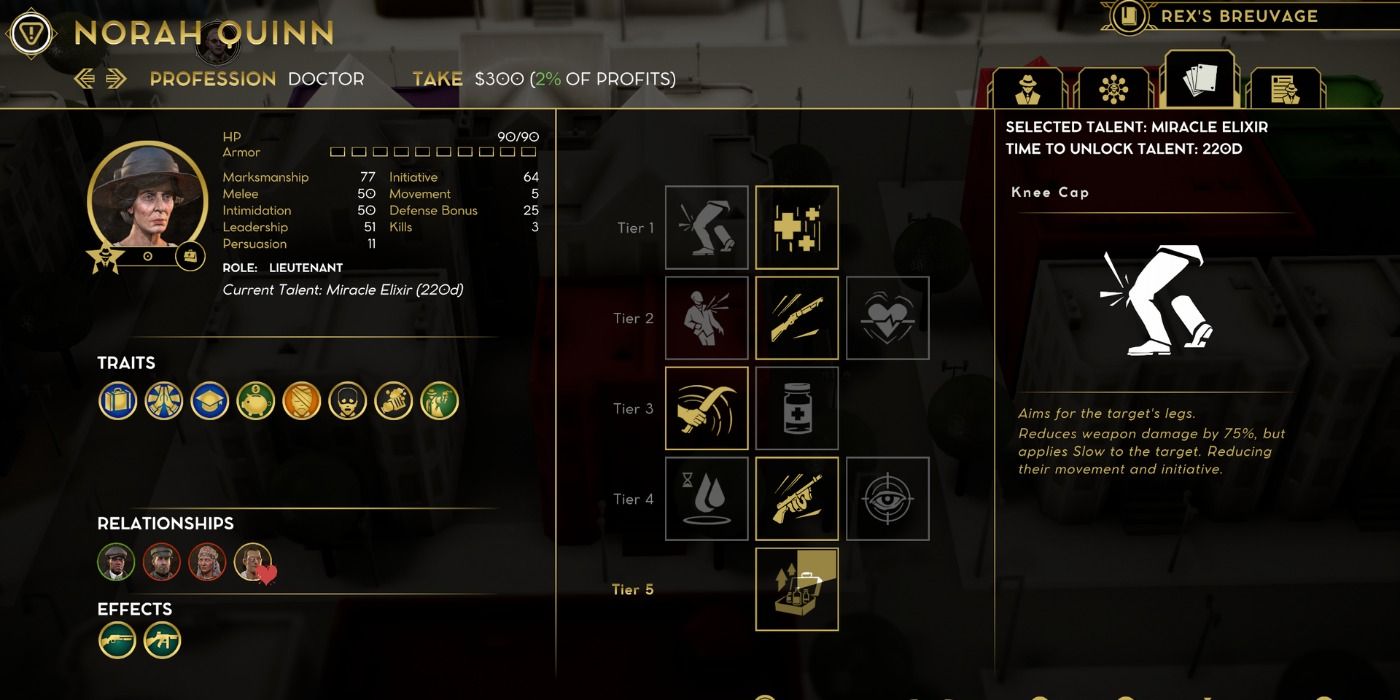 Each gangster also has choosable talents that you must pick for them as they level up, and each talent takes so many days to complete. They are things that can aid them in battle, and they can span health, defense, offense, and the use of different types of weapons.

You want your crew to have a wide range of talents so they can support you in fights in various ways. 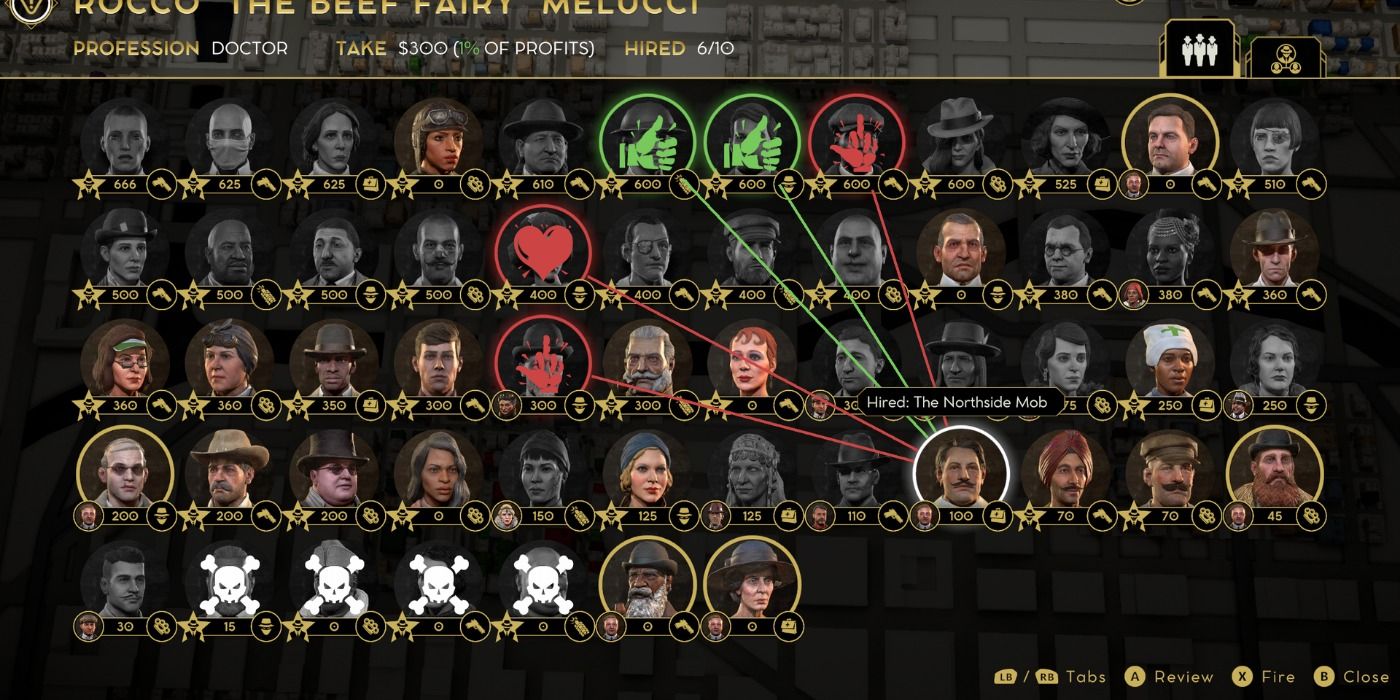 When deciding on who you want to hire for your crew, you also have to consider their relationships with other gangsters. When you go to the page where you can hire new gangsters, you will notice a few symbols pop up when you scroll over a gangster’s name.

The symbols you will see include:

It should also be noted that relationships can form between gangsters who work closely with one another. It can lead to violence, but you can ask your crew members to break it off which is always better than seeing them end up dead. 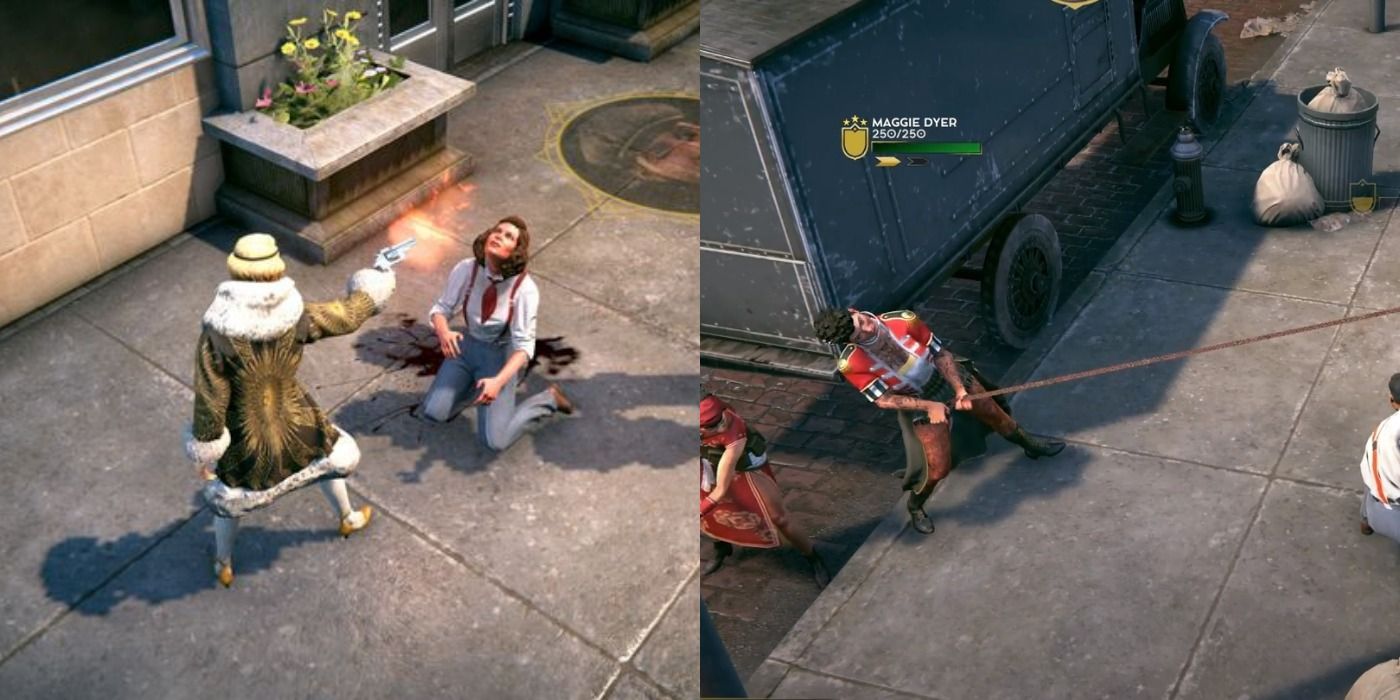 There are five types of gangsters who you can hire, and each one has a different profession that makes them special. It is best to have a good mix on your crew, but some gangster’s professions are better than others.

Here are the five professions of gangsters you can hire: 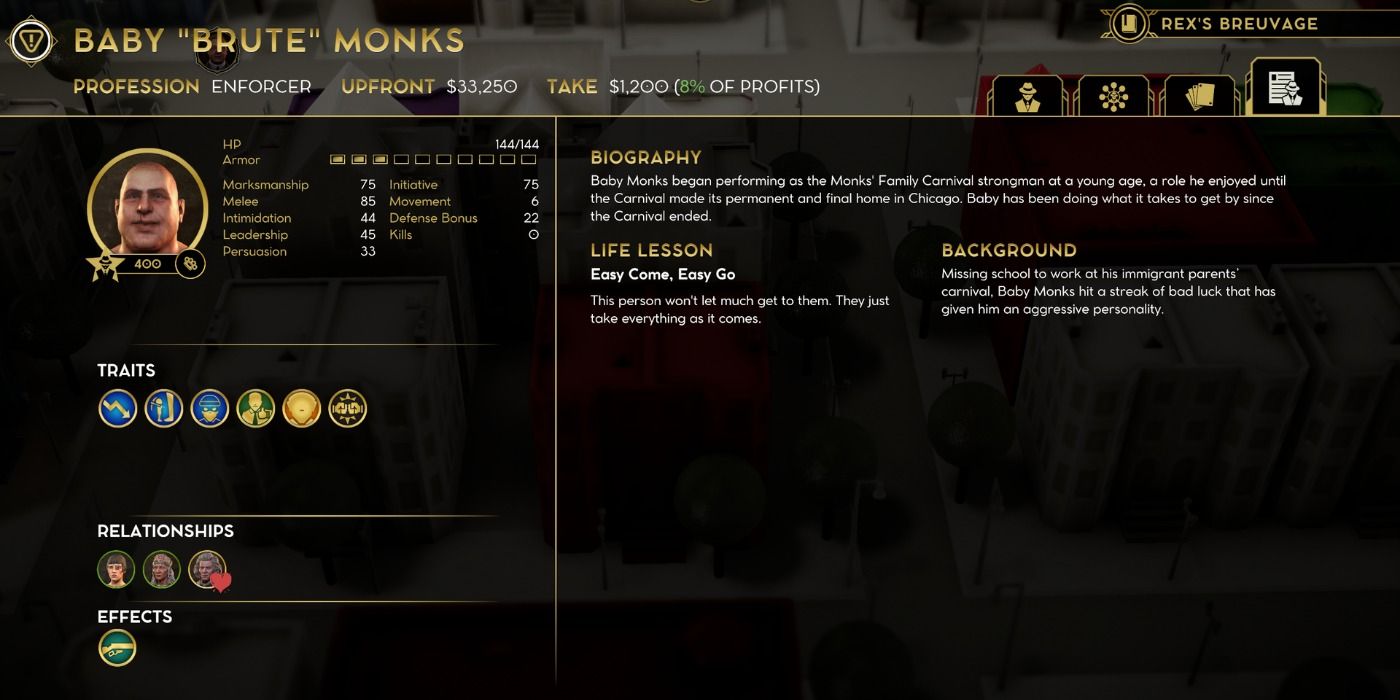 Enforcers work best with melee weapons and love to beat up their opponents during turn-based combat. They can use handguns, melee weapons, shotguns, and machine guns. 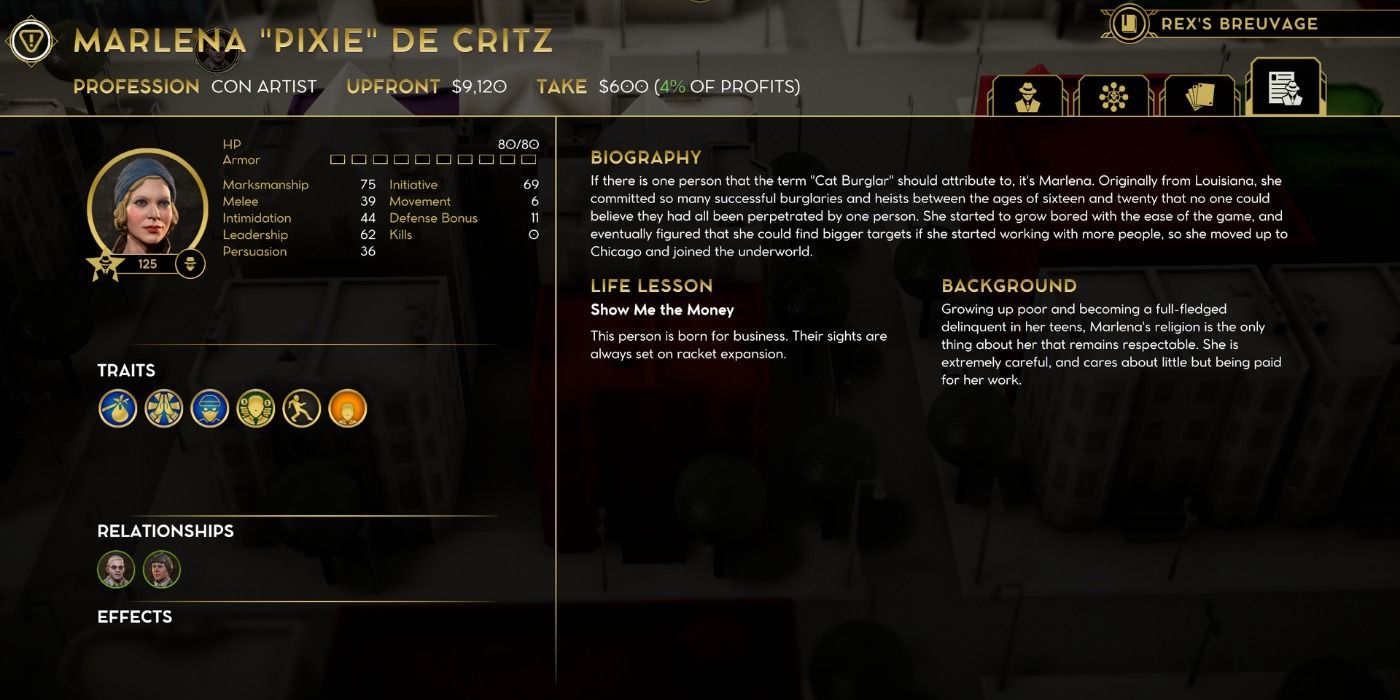 Con-Artists have enhanced movement and can move further than their comrades in a fight. This profession can use handguns, melee weapons, sniper rifles, and shotguns. 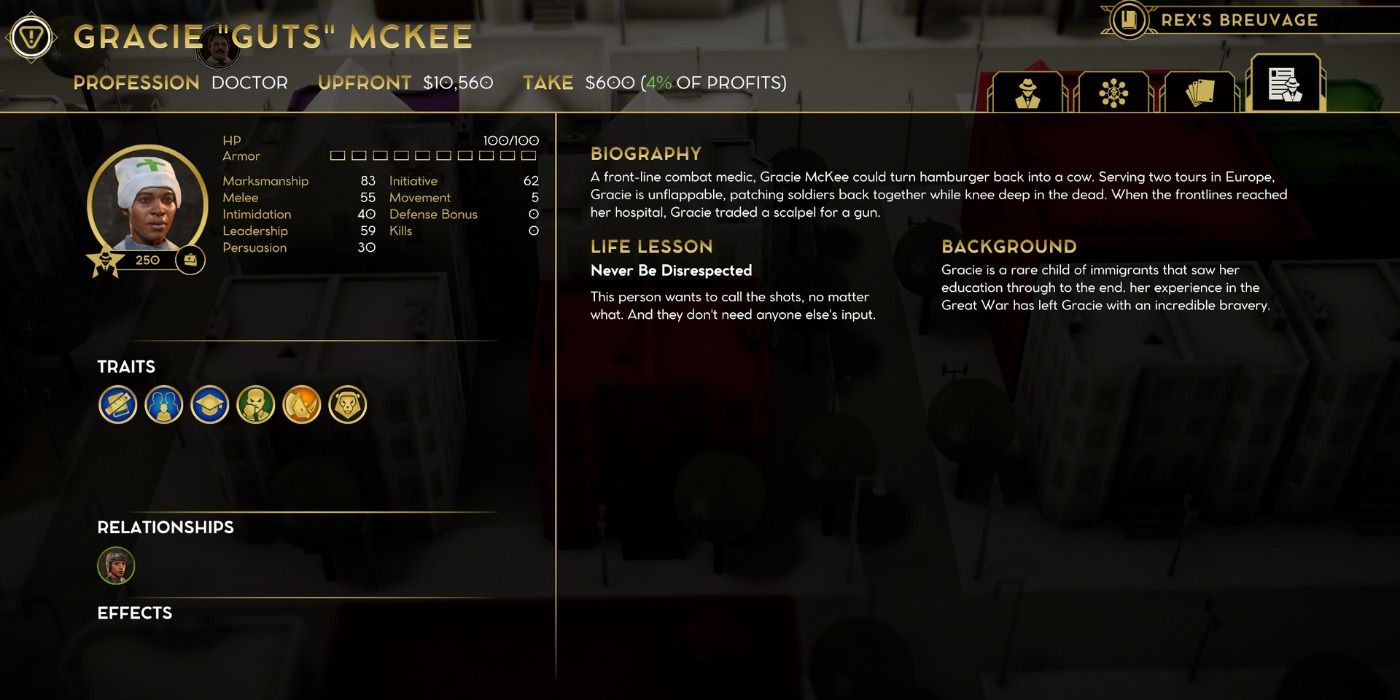 Doctor is the best of all the professions as they have exceptional healing powers and can save any gangster who is on the verge of death. They not only patch up the crew during battle, but they reduce the amount of time that their comrades spend in the hospital and the chances of catching an STD.

The weapons that this gangster is trained to use include rifles, handguns, melee weapons, and sniper rifles. 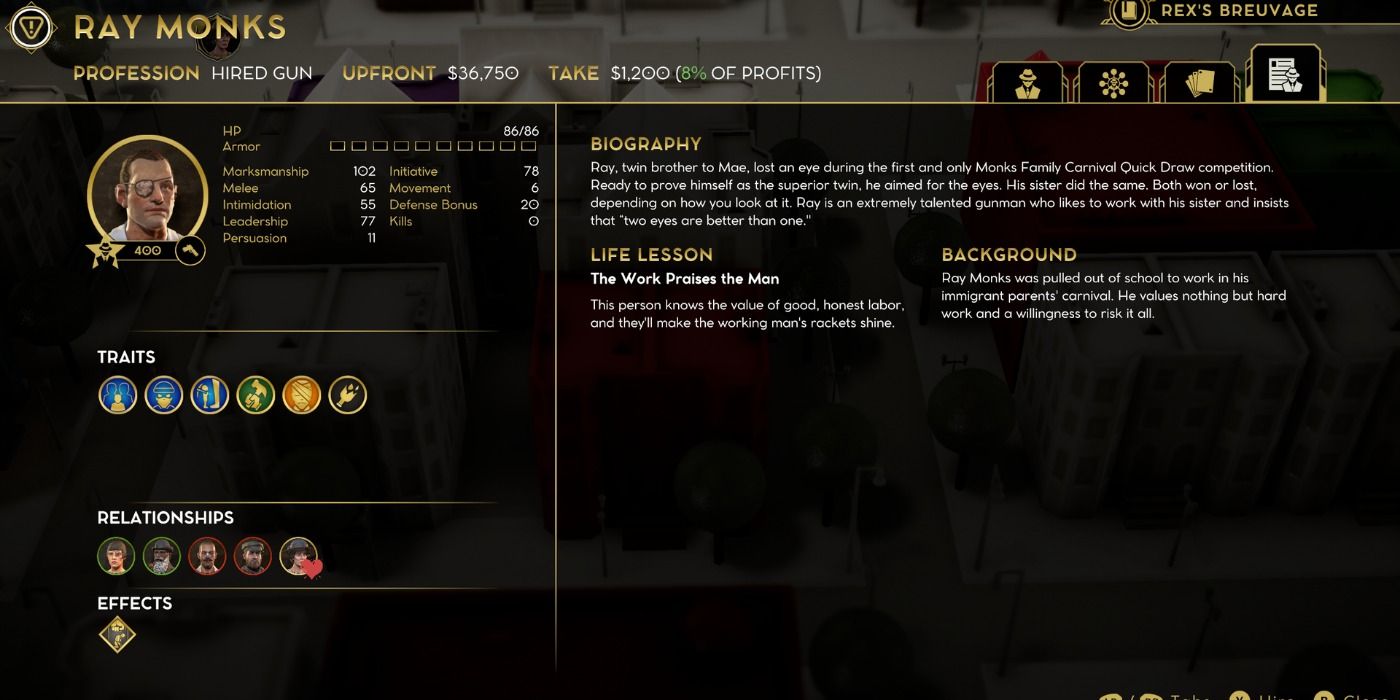 A Hired Gun is the best at using a sniper rifle due to their incredible marksmanship abilities. They also have a greater chance of obtaining critical hits as they are privy to using weapons such as submachine guns, melee weapons, rifles, handguns, and shotguns. 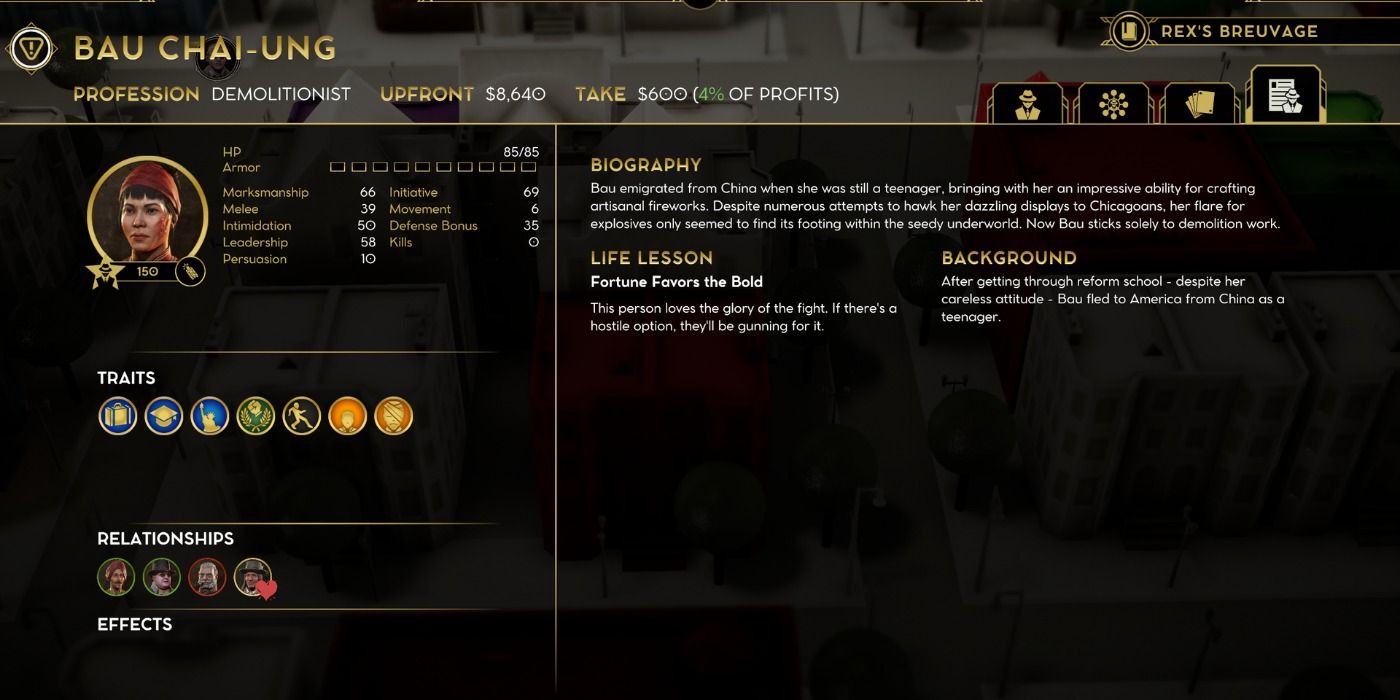 The Demolitionist is a fan of grenades and they always come prepared with one in their arsenal. The weapons they can use include handguns, machine guns, submachine guns, and melee weapons. 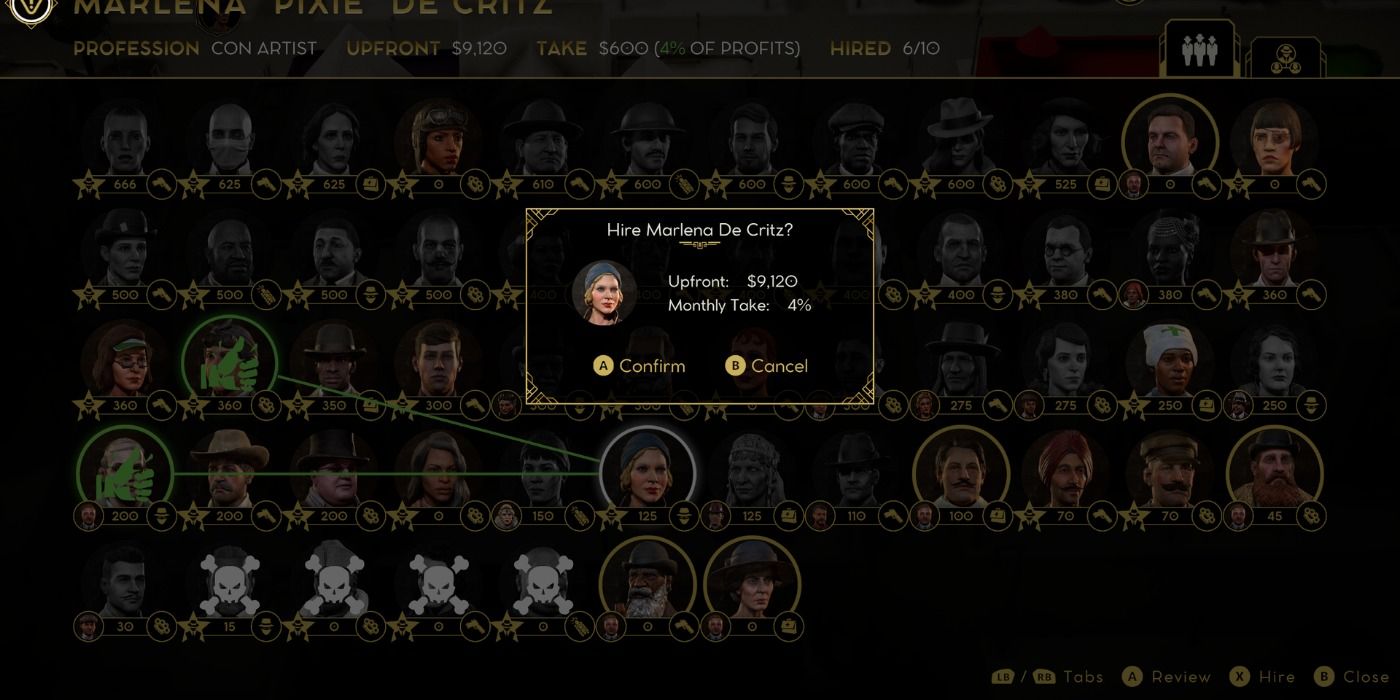 One thing to keep in mind when hiring a gangster in this historically accurate video game is how much they are going to cost you. They will require an upfront fee, which can run you as much as $73,500 to start.

The gangsters will also need payment as well for their services and each one will take a percentage of the profits. This can range from 2% to 10% of the profits which can grow quite costly, especially as your business and notoriety continue to grow.