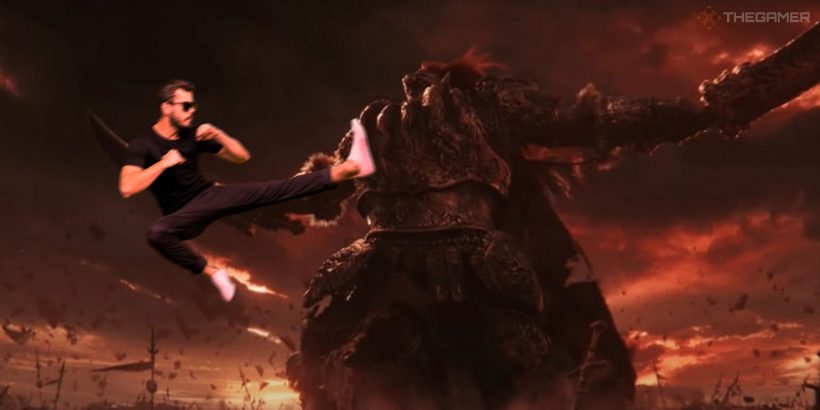 As Elden Ring players wait for the Game of the Year to get a significant dose of DLC, they continue to perform increasingly incredible feats with what they already have at their disposal. You can now add kicking Malenia to death to the already long list of weird and wonderful things achieved by members of the Elden Ring community.

Ainrun is the streamer responsible for the feat, sharing the entire thing on Twitch as it happened (thanks, GameRant). The word entire is very appropriate here as the kick-only showdown lasted almost four hours. Three hours and 43 minutes to be exact, and that's because as those of you who have played plenty of Elden Ring will know, kicks don't deal much damage at all.

With the Kick Ash Of War equipped, each successful strike with a foot would have dealt somewhere between 70 and 80 damage to Malenia. In a perfect world, that means Ainrun would have needed to land around 400 of them during their arduous Elden Ring battle. As if that wasn't bad enough, every time Malenia lands a blow, she gets back some health, undoing so many of the streamer's hard work each time.

The most impressive part of Ainrun's kick-only victory over Malenia was the reveal it was the streamer's first attempt. They're actually trying to play through Elden Ring in its entirety by using just kicks to beat every single enemy. If they can beat Malenia with only their feet, then that probably means they can beat just about anyone or anything in The Lands Between.

Elden Ring streamers really are having to get creative when it comes to finding new ways to beat the game. MissMikkaa is currently trying to beat two copies of it at the same time. As if that wasn't difficult enough, the streamer is playing one copy on a controller and another on a dance mat. She has already beaten various bosses with just a dance mat, so adding a second copy of the game into the mix was a natural next step, right?