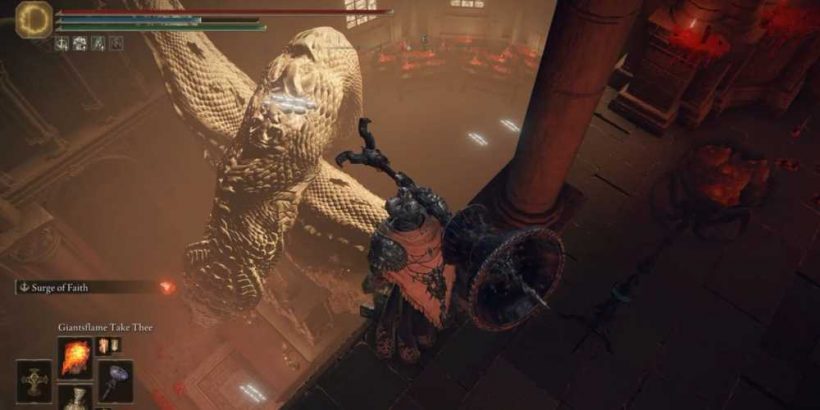 People find small details in FromSoftware games for years after they come out, and the Elden Ring discoveries show no signs of slowing down. One eagle-eyed Redditor has spotted what they believe to be the shed skin of Rykard, Lord of Blasphemy.

The shed skin can be found in the church where you fight the Godskin Noble in the Prison Town located within the Volcano Manor crater. The thing that separates this from just any old gigantic snake skin is the face on top of the head – it's located in the same spot as Rykard's face on the God-Devouring Serpent.

The skin adorns the top of a throne within the church, likely where Rykard used to sit before he moved into the basement. The Godskins are enemies who set out to kill all Gods and demi-gods in the Lands Between. Imagine how happy the one in that church would have felt just stumbling upon that mass of skin like that. Or, perhaps he bested Rykard but only skinned him, rather than successfully killing him.

Rykard was revered by his followers for his desire to bring down the Golden Order, but his fusion with the God-Devouring Serpent made some a little less willing to serve him. Unsurprising really, hard to commit to a boss who is now a writing mass of faces and scales.

The skin is a lot smaller than Rykard is now, implying he had to move due to becoming too large for the church. Devouring all those people well certainly pack on the pounds.

In other Elden Ring news, fans of the game have been getting very creative recently. One remade the game's launch trailer using nothing but Bionicle, and another has made a colossal Walking Mausoleum out of Lego bricks. The latter is comprised of 5000-6000 bricks and weighs 30 pounds. That's some serious heft.