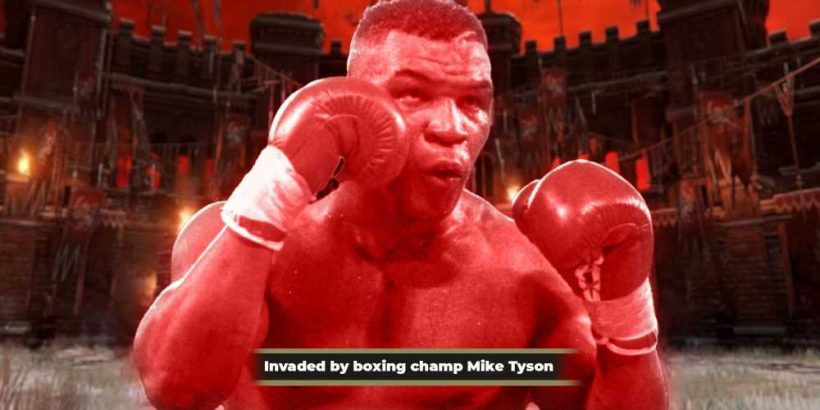 Elden Ring's colosseum DLC was surprise launched December 7, and players have been quick to make new characters for the PvP modes. Elden Ring's community is a creative one, with a recreation of Bloodborne's Father Gascoigne and, somehow, a mech suit build already made and shared. The latest wacky build comes courtesy of heavy_tempest1 – a Mike Tyson brawler, complete with copyrighted face tattoo.

The Tarnished version of the heavyweight boxing champ looks a little worse for the wear, but that's what happens when you're abandoned by Grace I suppose. Mike Tyson is known for fighting dirty, once biting off an opponent's ear, and his Tarnished counterpart is the same. Only instead of biting off ears, he's wearing illegal gloves, the Caestus, a leather weapon that sits over the fist and is inlaid with iron barbs.

Shared alongside a screenshot of the finished character is an action shot of Tarnished Tyson knocking a poor opponent square in the face, sending his head flying back. The reticule is locked right on their chest, and Tarnished Tyson's stance shows they're about to launch a devastating follow-up attack. For the opponent's sake, I hope he doesn't have as much stamina as the real boxer does.

Players have been sharing some hilarious comments under the post. The best comes from HarryPlopperOMG, "Put thy foolith ambithionth to reth." The build has made quite the impression, as commentors beg the OP, "Bro give me the slides…" They want to see the sliders that will show them how to recreate the legend themselves.

It seems this Tarnished Tyson has some bite to back up their bark (pun very much intended). One commenter wrote, "If you are the Mike Tyson that rocked me and my mate's shit on Xbox then you put your money where your mouth is no doubt lol." If you find yourself facing off against them in the colosseum you'd better keep your arms up and protect your ears at all costs.