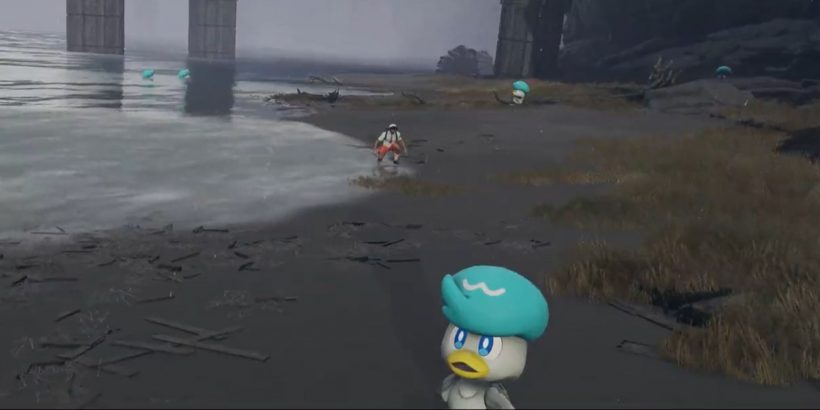 The same modder who added Bill Clinton to Elden Ring following The Game Awards' stage invader moment has given The Lands Between a Pokemon Scarlet overhaul, swapping Torrent out for Koraidon, changing boars into Lechonks, and transforming giant fire-breathing enemies into Reapadrilo (Fuecoco's final evolution).

It doesn't make Elden Ring any easier, but it does make it look a little less bleak, as it swaps out plenty of the characters, enemies, bosses, and passive mobs for Pokemon equivalents. You, the Tarnished, and Melania, even get trainer outfits so you're not just two out-of-place warriors mercilessy slaughtering Lechonks for some animal bones – hey, they do the same in Scarlet for ingredients.

Arestame shared a trailer for the mod on Twitter, where you can see wild Quaxlies and giant walking mausoleums now housing Poke Centers. It takes a lot more to reach them than in the actual Scarlet & Violet games, given that you have to bring a titan to its knees before climbing atop, but you don't need those to heal in Elden Ring, so it should be fine.

In the trailer, we also get a glimpse at the new summons Arestame mentions. When ringing the bell, they don't pull out ghostly jellyfish or clones of themselves, but rather Scarlet 'mons. One looks to be Meowscarada, who we also see as an enemy sneaking up on the Tarnished from the shadows, sticking a knife in their back. Still wanna kiss 'em? I see you.

To top it all off, invaders also have trainer outfits, so rather than two Pokemon fanatics locking eyes before throwing out their 'mons for a friendly battle, we now have untamed trainers charging at each other with bloodlust in their eyes, itching to kill the other. It's still not exactly a kid-friendly way to play Elden Ring.

Arestame hasn't shared the mod to their Nexus just yet, but hopefully, we'll get the chance to be stabbed by humanoid cat-people soon enough.