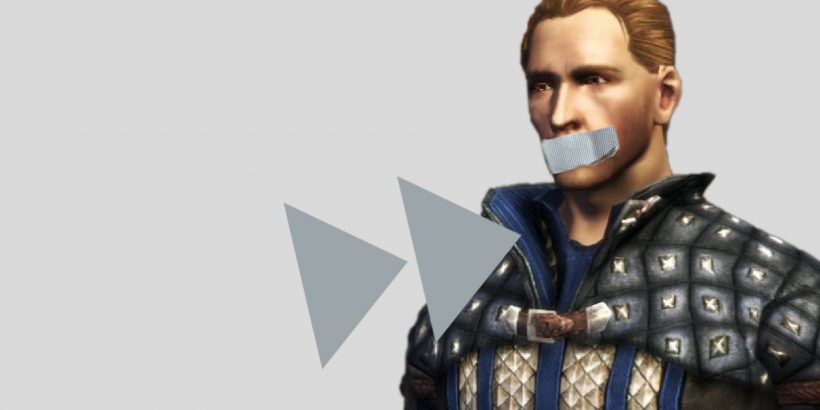 I’ve just finished Dragon Age 2 for the first time. If you’re a regular TheGamer reader and/or general Ben Sledge enjoyer (I’m sure someone out there is), you’ll know that before this year, I’d never played a BioWare game. So, I leapt into Dragon Age: Origins and gave it my best shot. It had everything from forgotten deadly sins, to betraying best friends, to an incredible Sloth Demon dungeon in the warped realities of the Fade. I loved it, so naturally I moved onto the sequel when I was done.

I don’t think I liked Dragon Age 2 as much as I did Origins, but that’s not to say it was bad. I think the combat is an improvement – I prefer the action slashing to the intensely methodical and tactical approach, which felt tired by Origins’ finale as I faced wave after wave of Darkspawn. However, I don’t think the dialogue is anywhere near Origins’ level in the sequel, and your response options boiling down to ‘good’, ‘bad’, or ‘funny’ feels limiting. Being confined pretty much to Kirkwall, a city I, a Ferelden refugee, didn’t care much for, also felt limiting and a poor use of the original’s thorough worldbuilding.

Things came together in the final act, though. Suddenly I felt that my decisions mattered as the Mages and Templars fought for supremacy. My Hawke, a Mage, sided perhaps predictably with my magical kin, taking down Meredith once and for all to end her tyrannical rule of the city. However, that’s not before Anders had his say.

Spoiler warning for a game released over a decade ago, but Anders is a terrorist. He blows up the Kirkwall Chantry with what appears to be a lyrium-infused fertiliser bomb. And you helped him do it. Despite the fact it was likely a Qunari recipe, you collected the materials, and you distracted the Grand Cleric while Anders planted his improvised explosive. However, I missed the catastrophic explosion because I got too eager with my reading.

Let’s take it back a little. Like I mentioned earlier, I don’t think the dialogue in Dragon Age 2 is as good as its predecessor. As such, I skip a lot of dialogue. I play with subtitles on, so often, once I’ve read the line, I skip. These are long RPGs, you can’t blame me for speeding things up a little. I ran into a few problems here and there – the camera skipping to a close-up in an unnatural manner or missing the second half of a character’s line due to either a late click or a glitch – but nothing major. Until the end.

“There can be no turning back.” It was at this point I pressed my final, fatal skip.

This skip didn’t just skip the “turning back” of Anders’ line though. It also skipped the shots inside the Chatry. It skipped the terror on the Grand Cleric’s face. It skipped the red beam of light destroying everything in its path, and it skipped the devastating explosion that followed. As far as I knew, everything was suddenly on fire for no apparent reason. It was Orsino asking Anders why he would do such a thing that finally made me realise I’d missed something major.

I found the scene on YouTube and watched it there and then, but it had lost a lot of its power. I wasn’t watching it on my big telly, I wasn’t watching it in order. It was an epic climax to the factional fractures of Dragon Age 2, but I spoiled it for myself to skip a line of dialogue. I’ve vowed never to skip another line of dialogue again, but I can’t promise it won’t creep in if things don’t improve in Inquisition. I’ve just got to keep my fingers crossed that I don’t miss anything as important this time around.