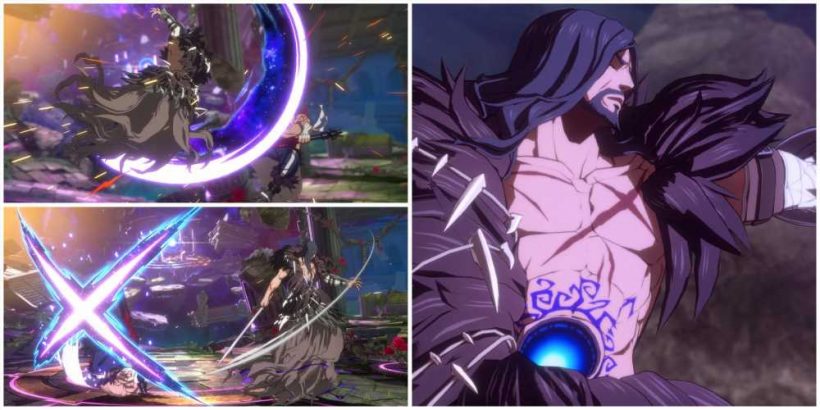 DNF Duel has an archetype for just about every playstyle out there, with your Rushdown, Zoners, All-Rounders, Grapplers, and even Puppeteers having excellent characters representing them. Then, for good measure, you have Lost Warrior, the definition of a Gimmick Fighter with bizarre mechanics that makes him feel and play much differently than the rest of the cast.

Making matters stranger, Lost Warrior is the only unlockable character in the game and is unlocked through the story mode. And, as far as tournaments provided by Neople are concerned, he's banned from the events, placing him in an odd spot for competitive players wanting to main him.

Want to do some homework on this timeshifting, blade-wielding warrior before you take the plunge into this lengthy guide? Please give his Command List a glance to see everything he's capable of in DNF Duel! 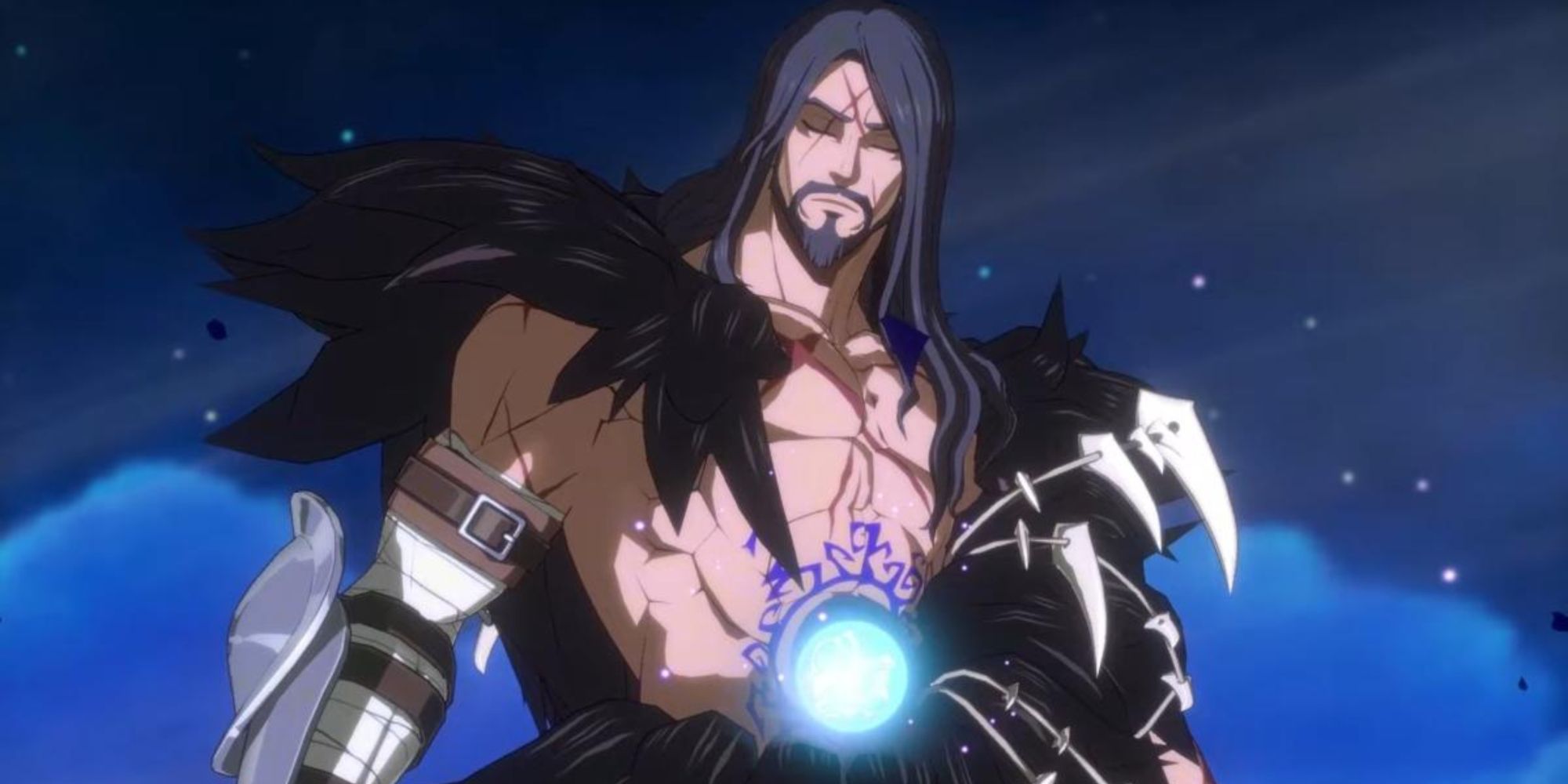 If you're looking for an incredibly bizarre character to play with no discernable or comparable playstyle, then Lost Warrior is your man. He is the textbook definition of a Gimmick Character that is remarkably strong at range and has a staggeringly high damage output, allowing him to rapidly drain his opponent's health with only a handful of attacks. However, his gimmicks and raw power come with a heavy counterbalance, making him hard to recommend for newcomers.

As strong as Lost Warrior's ranged game is, he struggles at mid and close-range encounters, failing to keep the pressure up against opponents who can successfully close the gap on him. Furthermore, DNF Duel's 'Guard' button is Lost Warrior's Achilles' Heel, as his opponents can hold it in to block his built-in left/right mixups instead of holding back to block and manually switching sides to become safe. However, even with all his downsides, Lost Warrior is still an absolute blast to play, even if the odds are almost always stacked against him.

And, like always, we'd like to nudge newcomers to the game or genre to check out the table below before moving past this point, as it contains the essential notations and terms found in DNF Duel, which will be handy to know as we use them in the guide to explain Skills, combo routes, and more! 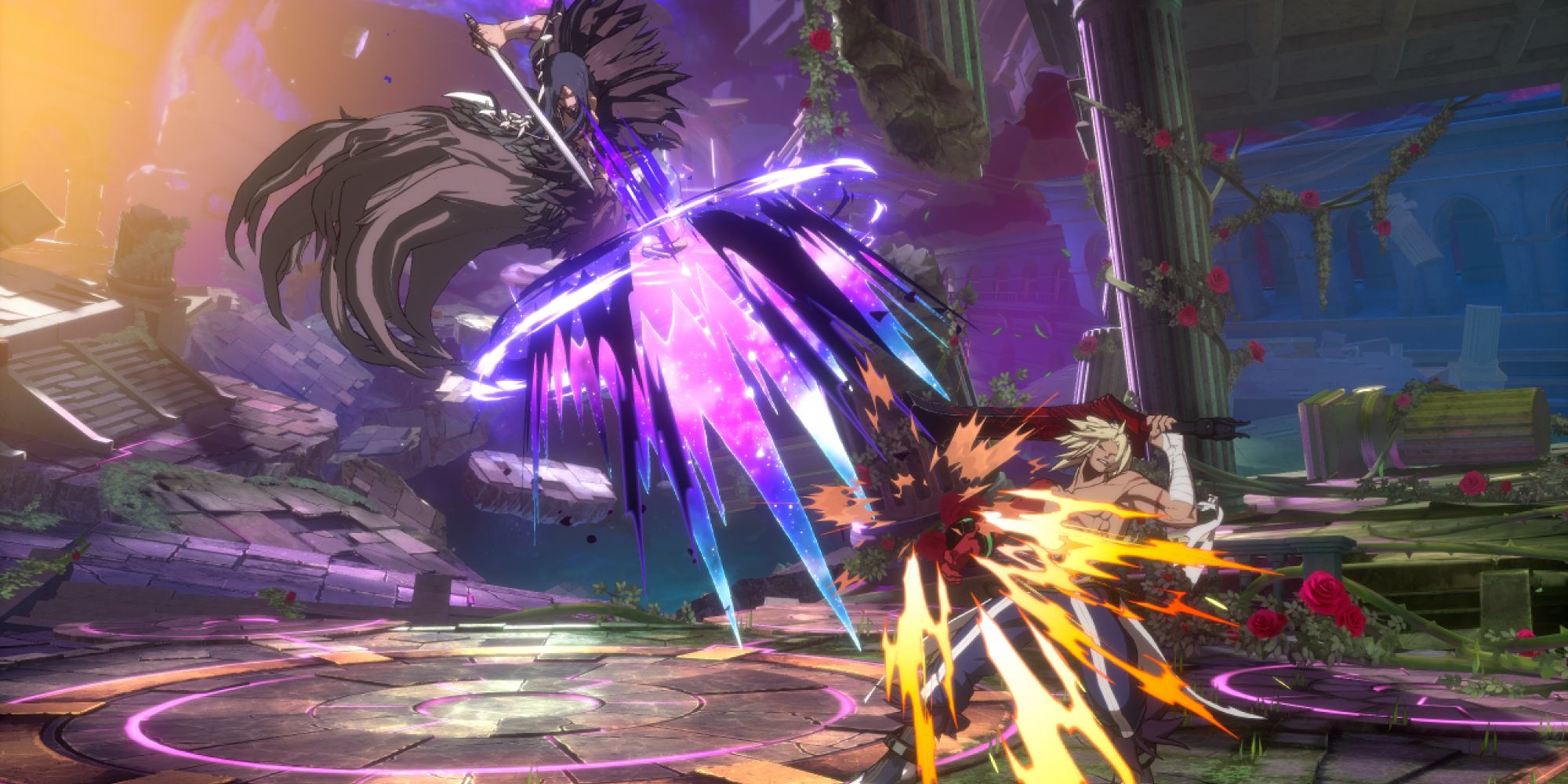 The vast majority of Lost Warrior's Special Moves (Skills) involve him teleporting to a new location before releasing a devastating slash with hopes of catching his opponent off guard to flow directly into combos. The problem with this sort of gameplay in DNF Duel is that the game's 'Guard' button completely nullifies the possibility of creating pressure or cross-ups as it will automatically switch sides for you.

However, there is still some hope and potential in Lost Warrior's playstyle, even though it can be quite challenging to get rolling and relies heavily on his Mana Skills more than anything else. Due to his excessive damage output, Lost Warrior can erase large chunks of his opponent's health bar with only a few actions, making each Skill and Mana Skill crucial to learn how to use and chain together correctly. 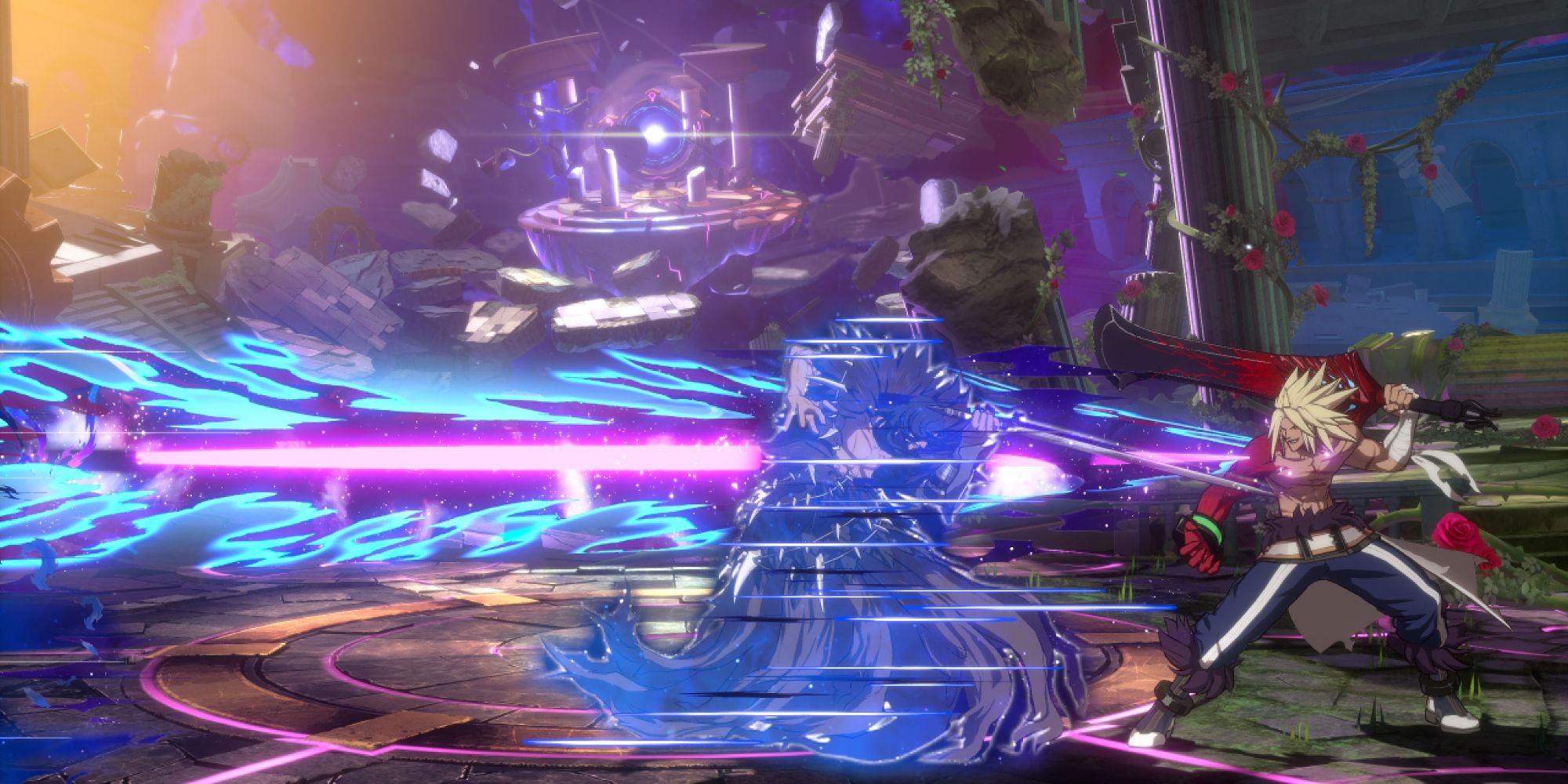 Mysterious Slash is Lost Warrior's 5S, which has him teleport forward with a vicious slash that can place him on the opposite side of his target, depending on the distance. While this Skill can make for an excellent cross-up option, it can automatically be blocked if players use the Guard button instead of manually blocking by holding back. Lost Warrior can cancel directly into Vanish or Phase Shift on hit or even when blocked. 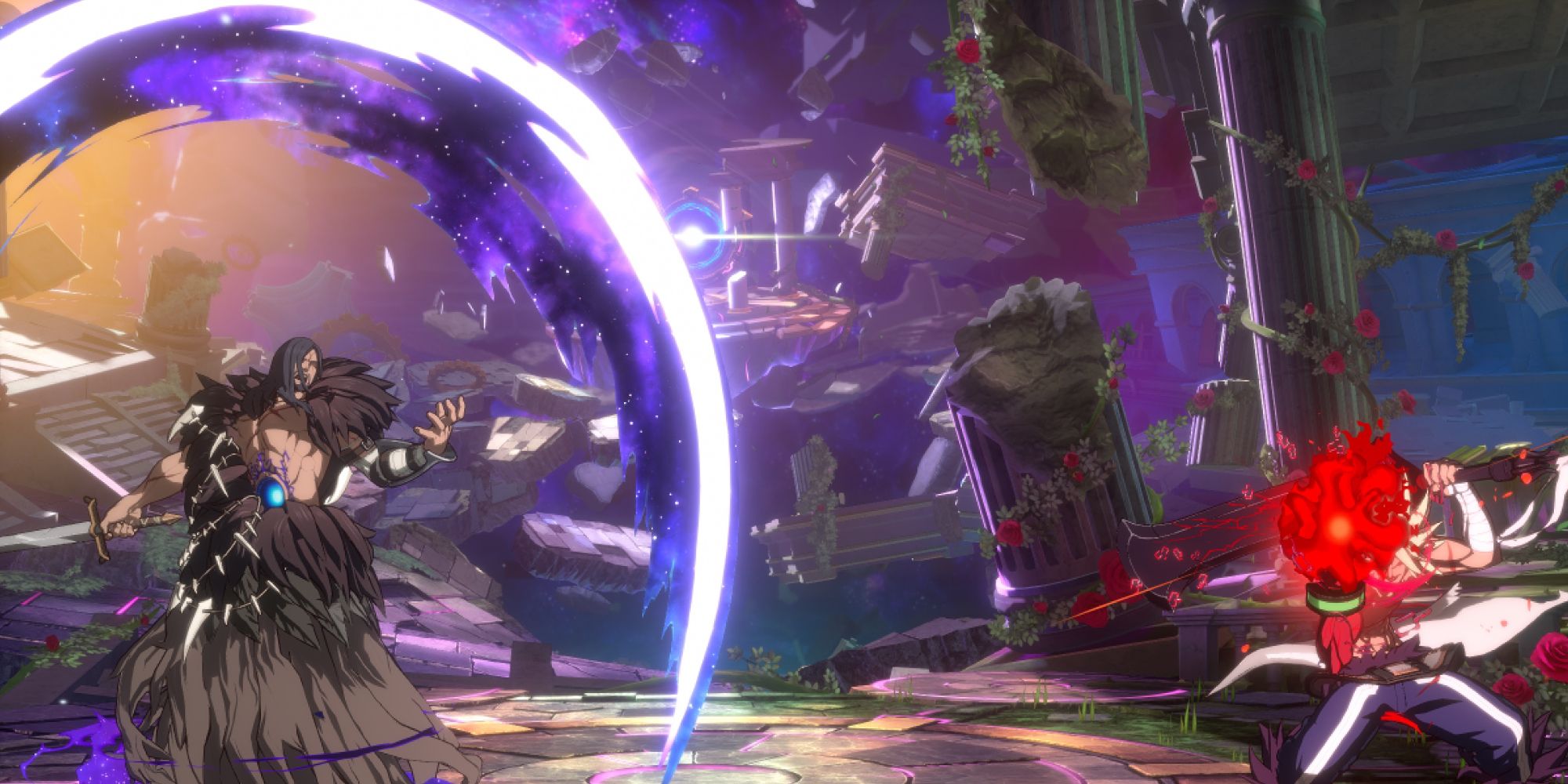 Lost Warrior swings his long sword in a wide arc that begins on the ground in front of himself, travels high above his head, and ends behind his back, creating nearly a complete circle around himself of cosmic energy. While Resolute Cut covers a significant area around himself, the move's slow start-up and execution make it one of the worst anti-air options at his disposal, limiting its use to a combo extension tool. This is also Lost Warrior's 2S action. 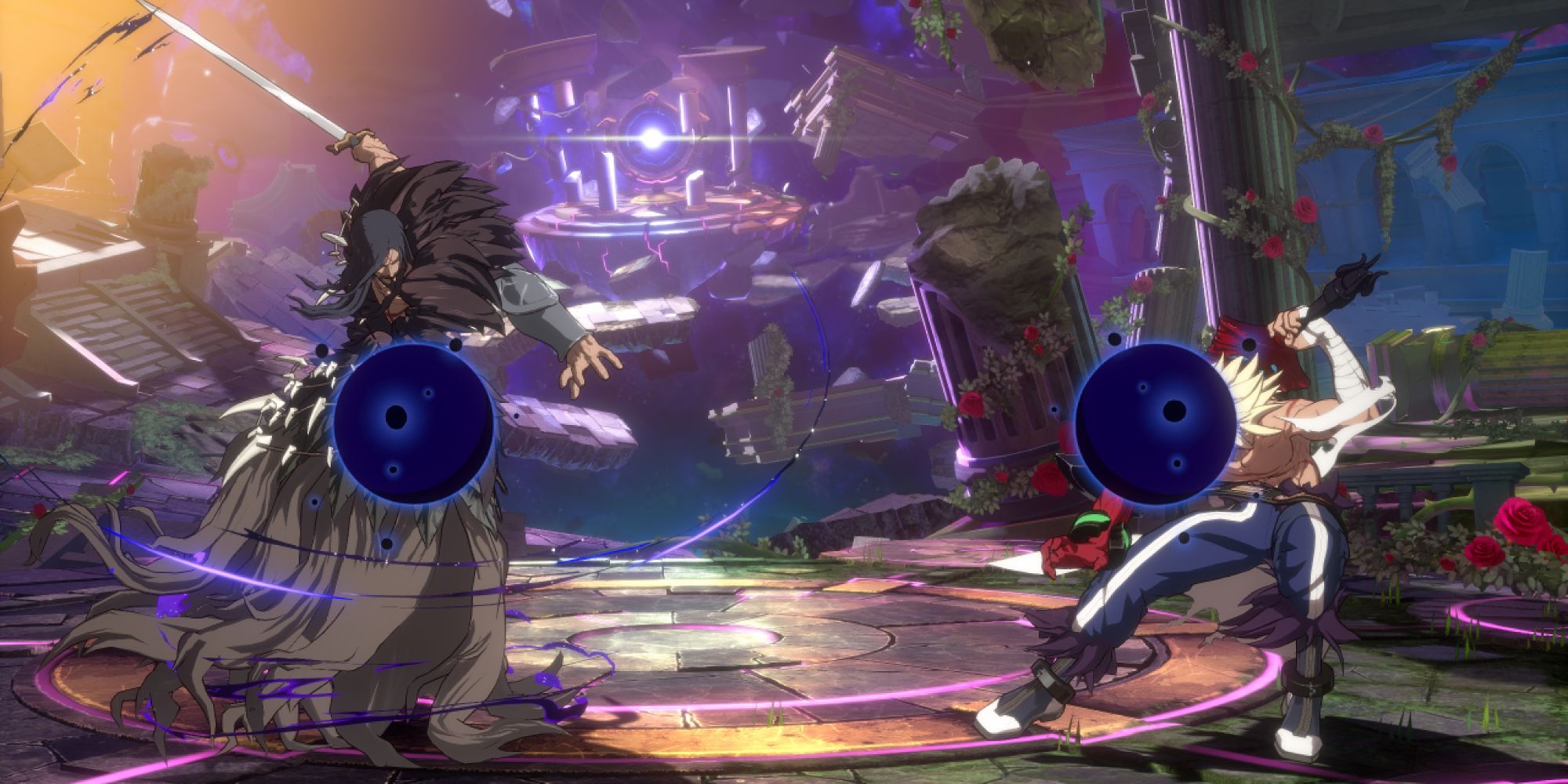 Phase Shift has Lost Warrior place a mysterious blue-ish purple orb at his target's current location, switching places with them on contact and finishing with a brutal slash from his straight sword. While the orb counts as a projectile, the move becomes a hitgrab on hit and places the enemy in a hard knockdown state, allowing him to follow up with OTG actions such as Mysterious Pierce, Vanish Cutter, and Vanish Strike. While this 6S Skill is a powerful tool, it cannot be used on airborne opponents due to its tracking properties. 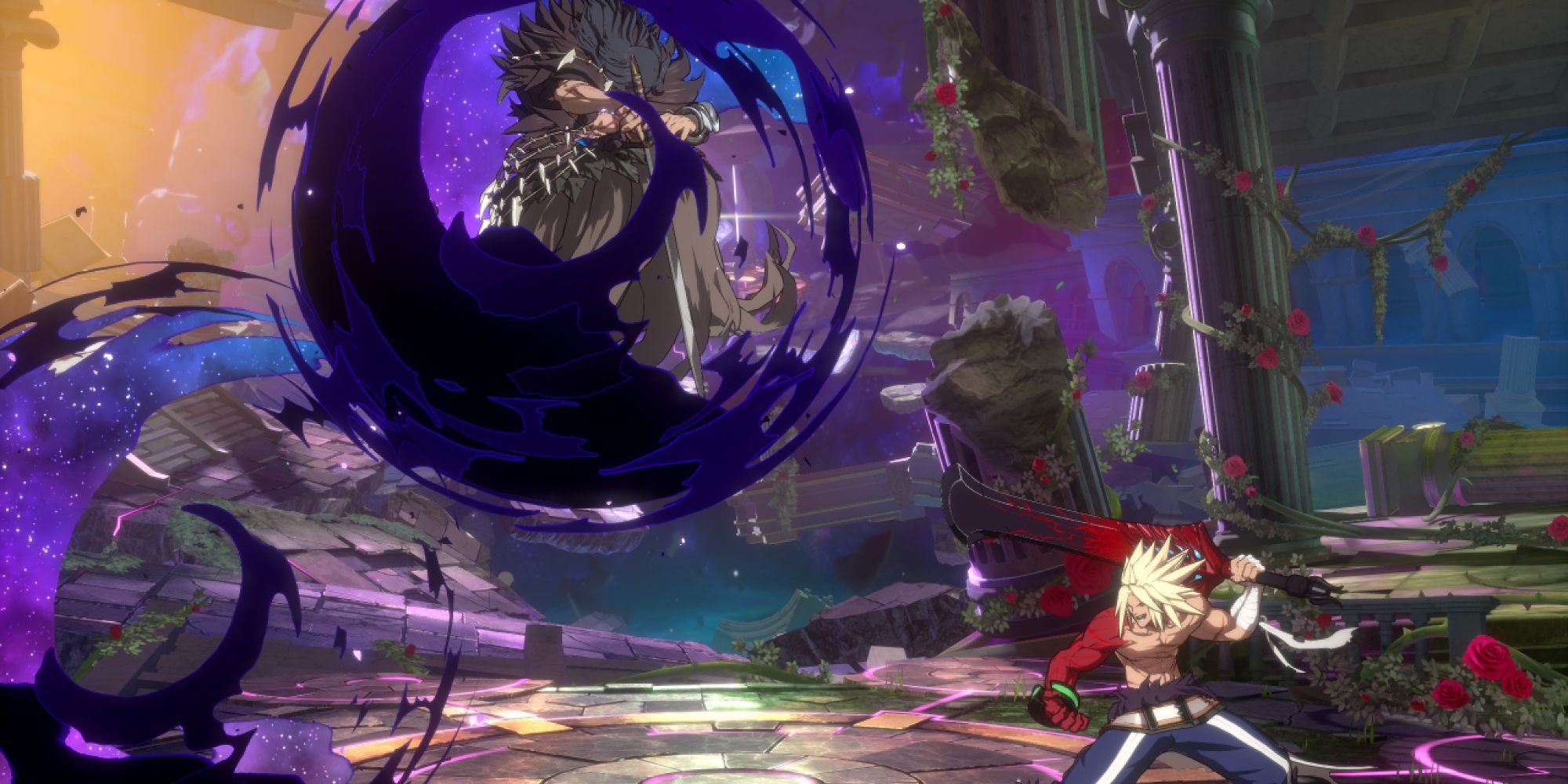 Vanish is Lost Warrior's 4S command and has him swiftly teleport a few feet forward and high into the air, having him recover mid-air, allowing him to use Mysterious Sphere or Dominate before landing. This is an excellent overhead and mixup option for Lost Warrior and is also a great way to extend combos on airborne enemies. 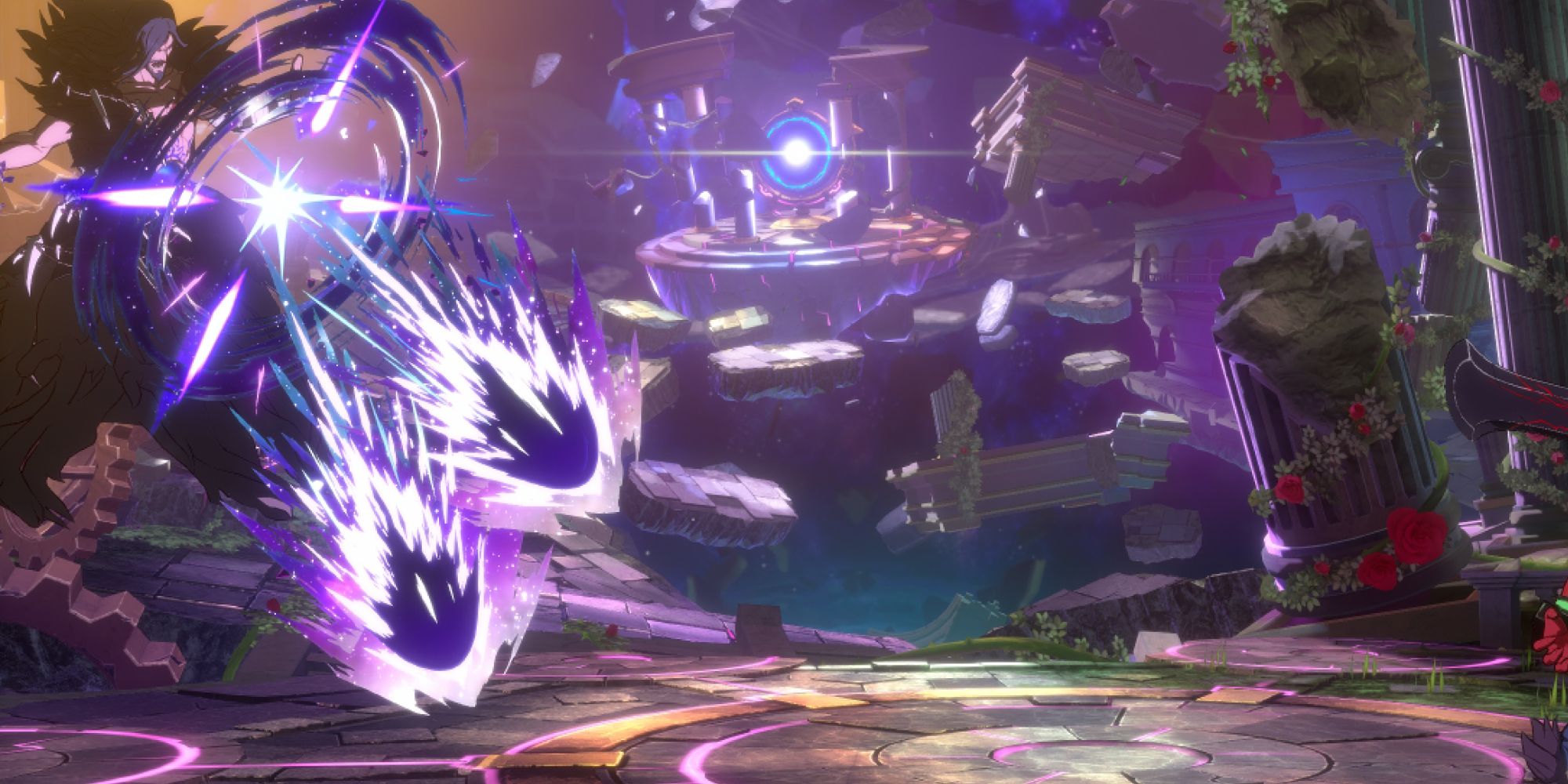 Lost Warrior launches two cosmic meteors from a portal at varying angles towards the ground before recovering mid-air. This can be followed up with another air action such as Dominate. Additionally, if the cosmic meteors cover enough ground before hitting your target, you can swiftly follow up with Phase Shift or Vanish Cutter, which leads to a full combo. 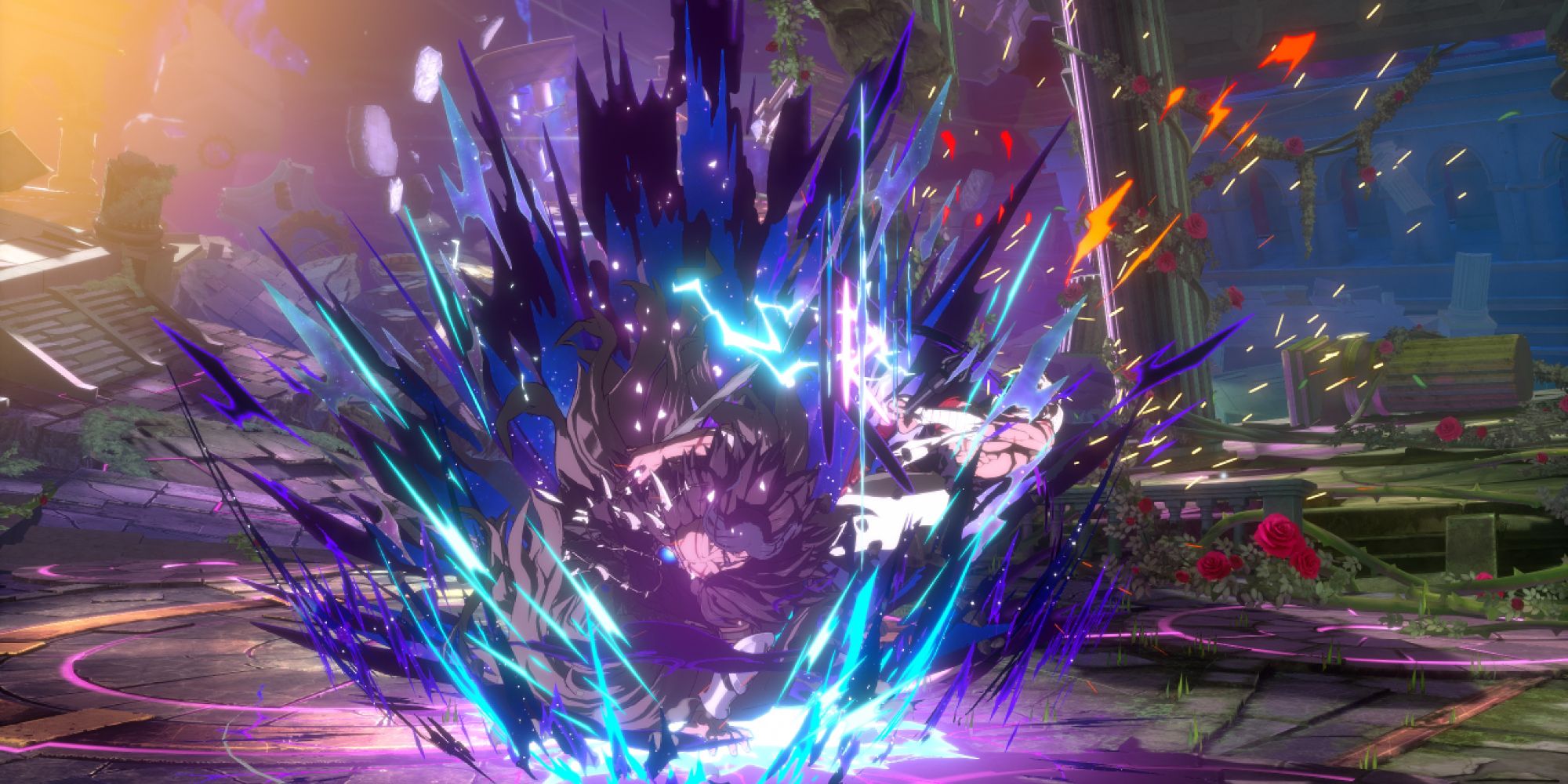 While every character relies heavily on MP Special Moves (Mana Skills) to extend combos or deal lots of damage, Lost Warrior needs them more than anyone else as they are his only source of pressure in the game. Not only does Lost Warrior's Mana Skills allow him to dish out even more damage than he already does, but they can also let him freeze his opponent in place, giving him the opportunity to land several uncontested hits.

We will touch more on Lost Warrior's unique Time Stop mechanic below, but we need to cover the importance of his Mana Skills first, as they are what makes him able to compete with the other fighters. Like every other character, Lost Warrior has a Mana Gauge with an ever-expanding pool of Mana that increases the more you take damage, allowing you to use more Mana Skills as the round drags on.

Since Lost Warrior's entire gameplan revolves around his Mana Skills and goal to stop time, it's incredibly easy to use more Mana than you have readily available, placing you into a state of 'Exhaustion.' If you reach this state as Lost Warrior, you are more or less done for, as you can no longer use Mana Skill for an extended period of time and lose access to what makes him a capable fighter in the first place. You must manage your Mana Gauge with extra caution when playing as Lost Warrior if you want any chance of taking the round. 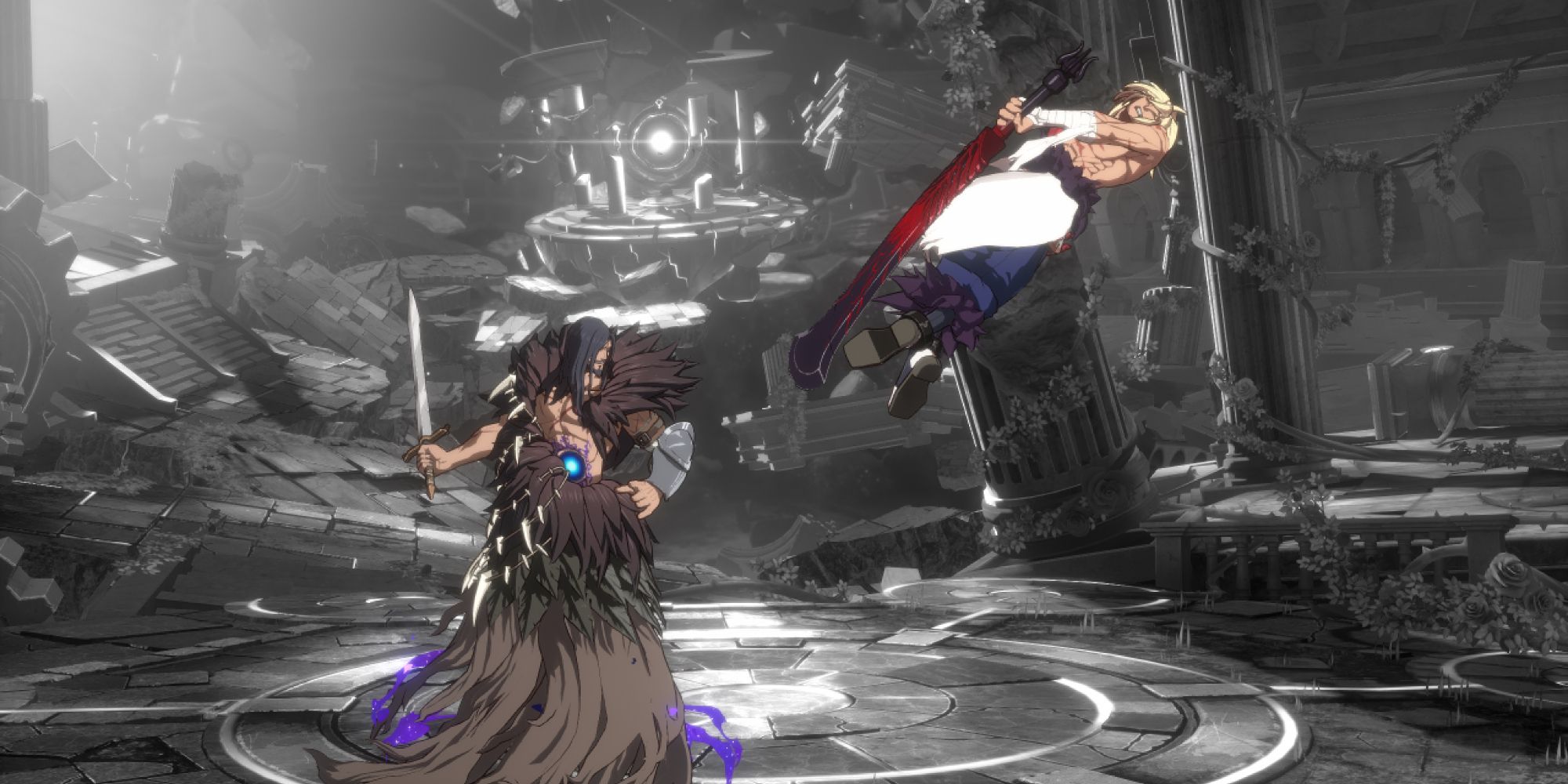 As mentioned earlier, Lost Warrior's Time Stop mechanic is his ace in the hole, allowing him to apply pressure passively throughout the course of the round. Essentially, whenever one of his Mana Skills connects with his opponent, a stack of Engraved Time will be rewarded to Lost Warrior. If he gets five stacks of Engraved Time, he will freeze time around him, locking his opponent in place for a brief period. Additionally, the Time Stop mechanic is further improved with his Awakening Effect 'Logic of the Dimensions,' which we will cover in greater detail later in the guide. 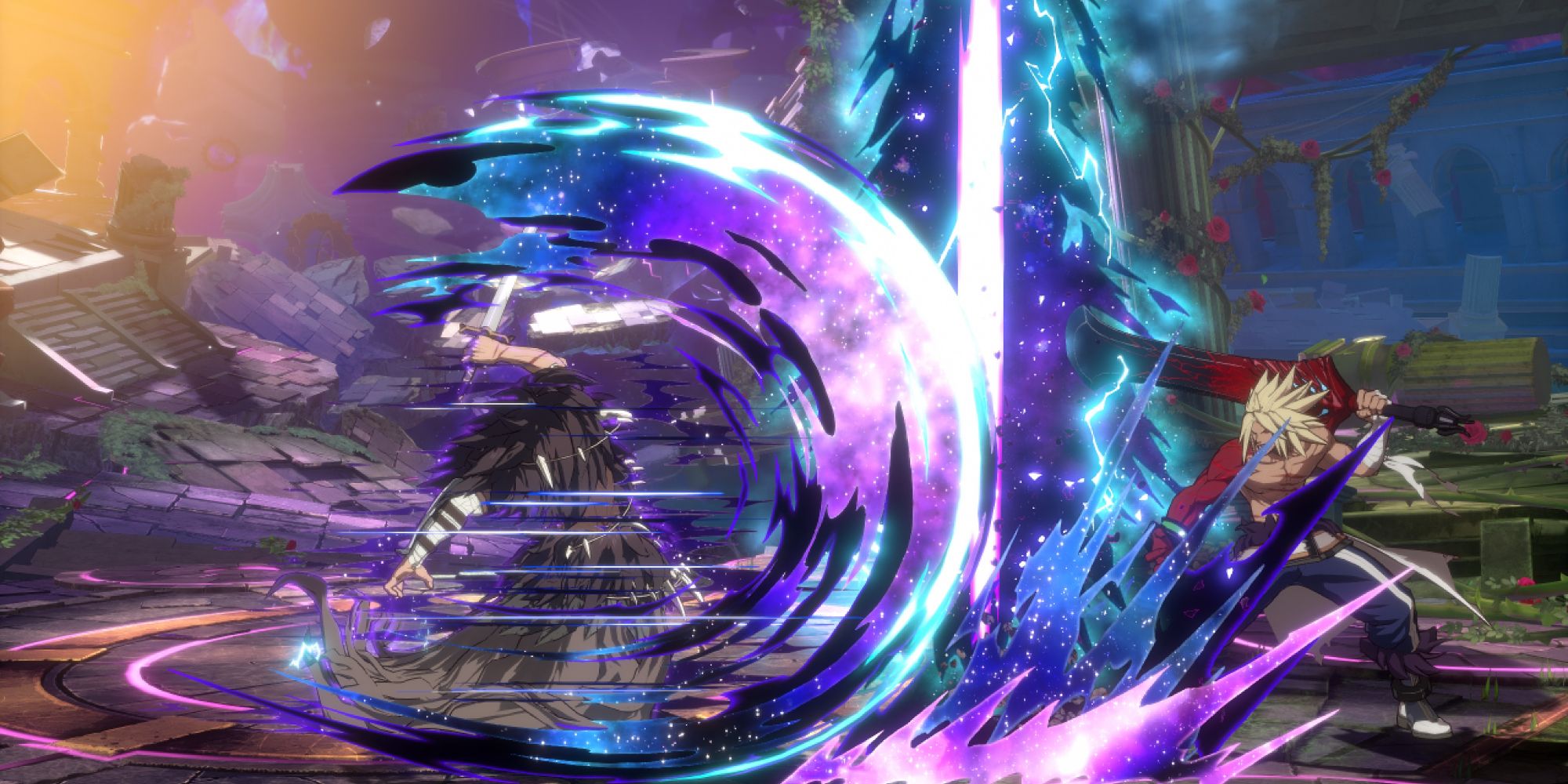 Vanish Cutter is Lost Warrior's 5MS that has him teleport forward to deliver a devastating cosmic slash with his straight sword, launching his opponent on contact. If Lost Warrior is close enough to his target, he will cross over them, giving him a free cross-up if the opponent isn't Guarding. While not its primary use, Vanish Cutter is an excellent anti-air tool and is his best option. Vanish Cutter also hits OTG, allowing you to extend combos after placing your opponent in a hard knockdown state from moves such as Phase Shift, Absolute Guard, or Dominate. Lastly, Vanish Cutter requires 50 MP to cast. 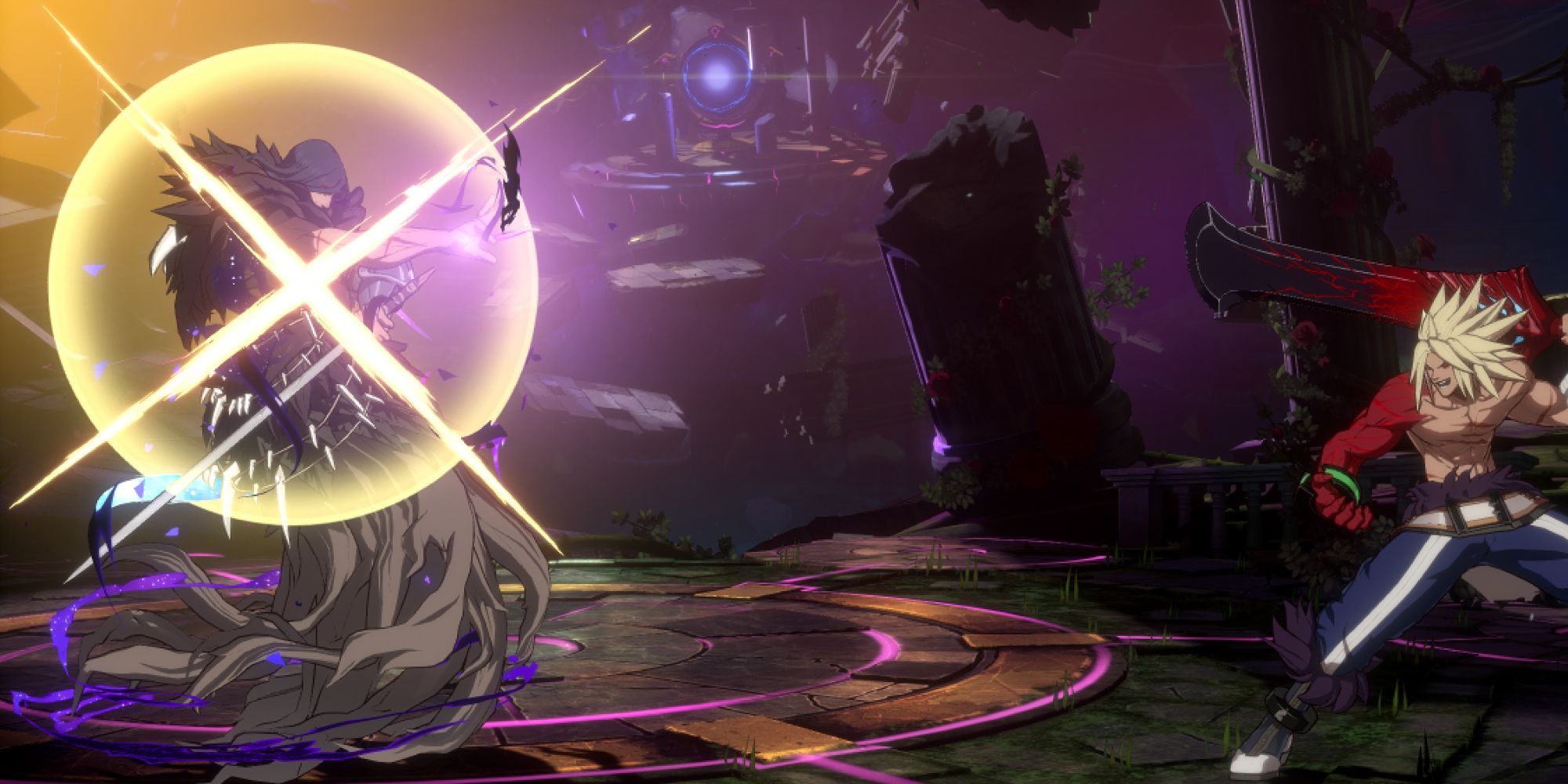 Absolute Guard is Lost Warrior's invincible reversal and counter that procs whenever he's hit during the animation, making it a poor anti-air option but valuable for overly aggressive or predictable opponents. Unfortunately, Absolute Guard pales in comparison to other reversals as it can be countered by throws, low strikes, and even projectiles. However, landing this Mana Skill will place your opponent in a hard knockdown state, allowing you to follow up with Mysterious Pierce, Vanish Cutter, and Vanish Strike. Absolute Guard costs 50 MP to use.

Like every other character in the game, Lost Warrior has specific Mana Skills that share a Motion Input alongside the 'Simple' one, which will have your Mana begin regenerating immediately after use. Absolute Guard is such Mana Skill and has the following inputs: 2MS or 623MS (⭢⭣⭨MS). 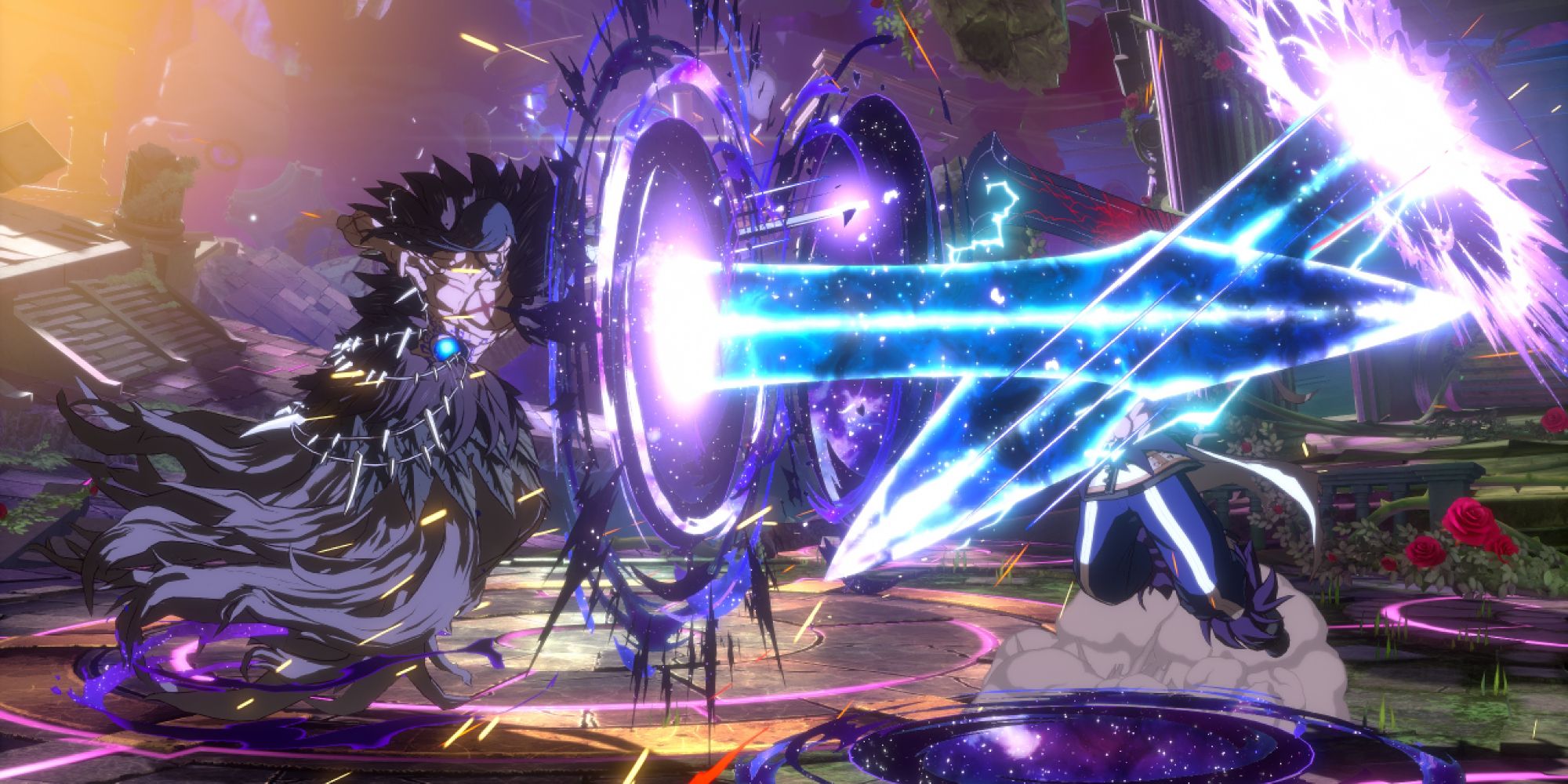 Mysterious Pierce has Lost Warrior open three portals around his enemy and summons a large cosmic sword through each of them, piercing his target for substantial damage. The cosmic swords are classified as projectiles, with the third sword counting as an OTG action, making it an excellent option for hitting opponents placed in a hard knockdown state by Phase Shift, Absolute Guard, or Dominate. If your target is airborne, you can combo into Dominate on hit. This Mana Skill requires 60 MP to use and is one of Lost Warrior's best combo extenders.

Like every other character in the game, Lost Warrior has specific Mana Skills that share a Motion Input alongside the 'Simple' one, which will have your Mana begin regenerating immediately after use. Mysterious Pierce is such Mana Skill and has the following inputs: 6MS or 236MS (⭣⭨⭢MS). 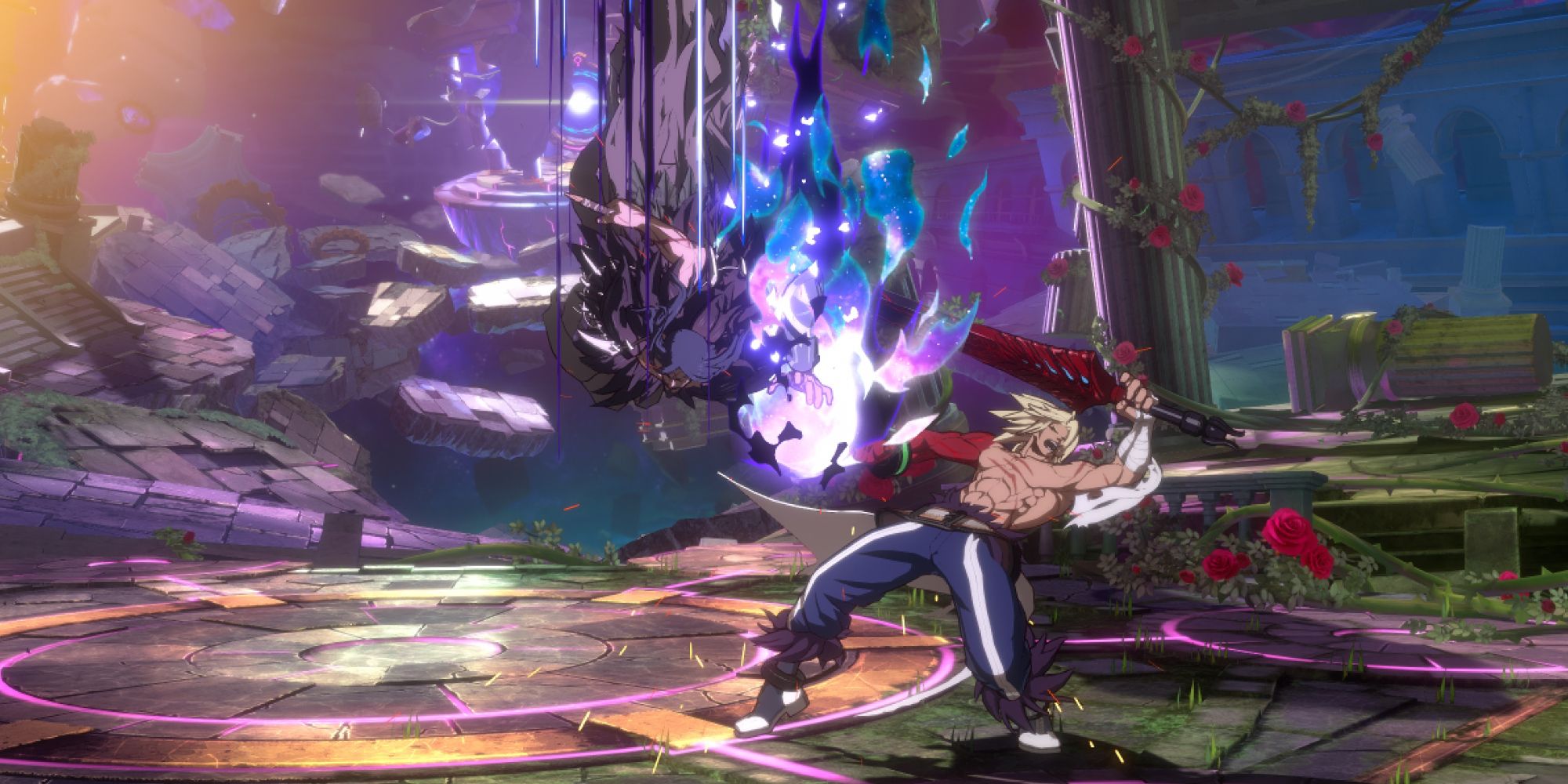 Vanish Strike has Lost Warrior disappear before swiftly reappearing directly above his target's head, where he nosedives towards the ground with a ball of cosmic energy in the palm of his left hand. The force of the blast causes his opponent to bounce off the ground on hit, allowing him to follow up other Mana Skills. Vanish Strike also hits OTG, making it an excellent way to extend combos that use Phase Shift, Absolute Guard, or Dominate. To use Vanish Strike, you will need 70 MP.

Like every other character in the game, Lost Warrior has specific Mana Skills that share a Motion Input alongside the 'Simple' one, which will have your Mana begin regenerating immediately after use. Vanish Strike is such Mana Skill and has the following inputs: 4MS or 214MS (⭣⭩⭠MS). 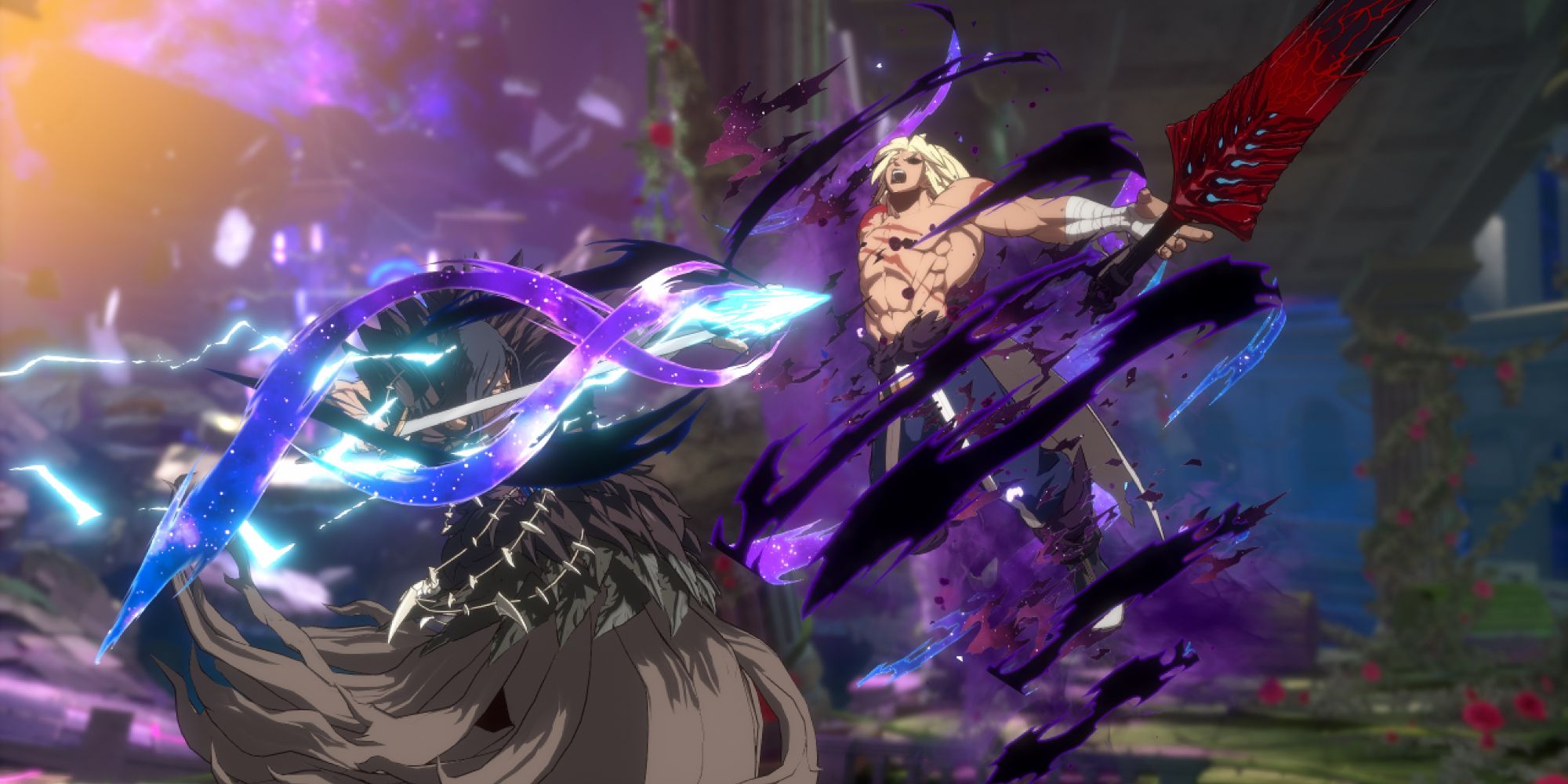 Dominate is Lost Warrior's j.MS that requires 70 MP to use and is a hitgrab performed in mid-air and places your target in a hard knockdown state on hit, allowing you to extend into a combo with Mysterious Pierce, Vanish Cutter, and Vanish Strike. 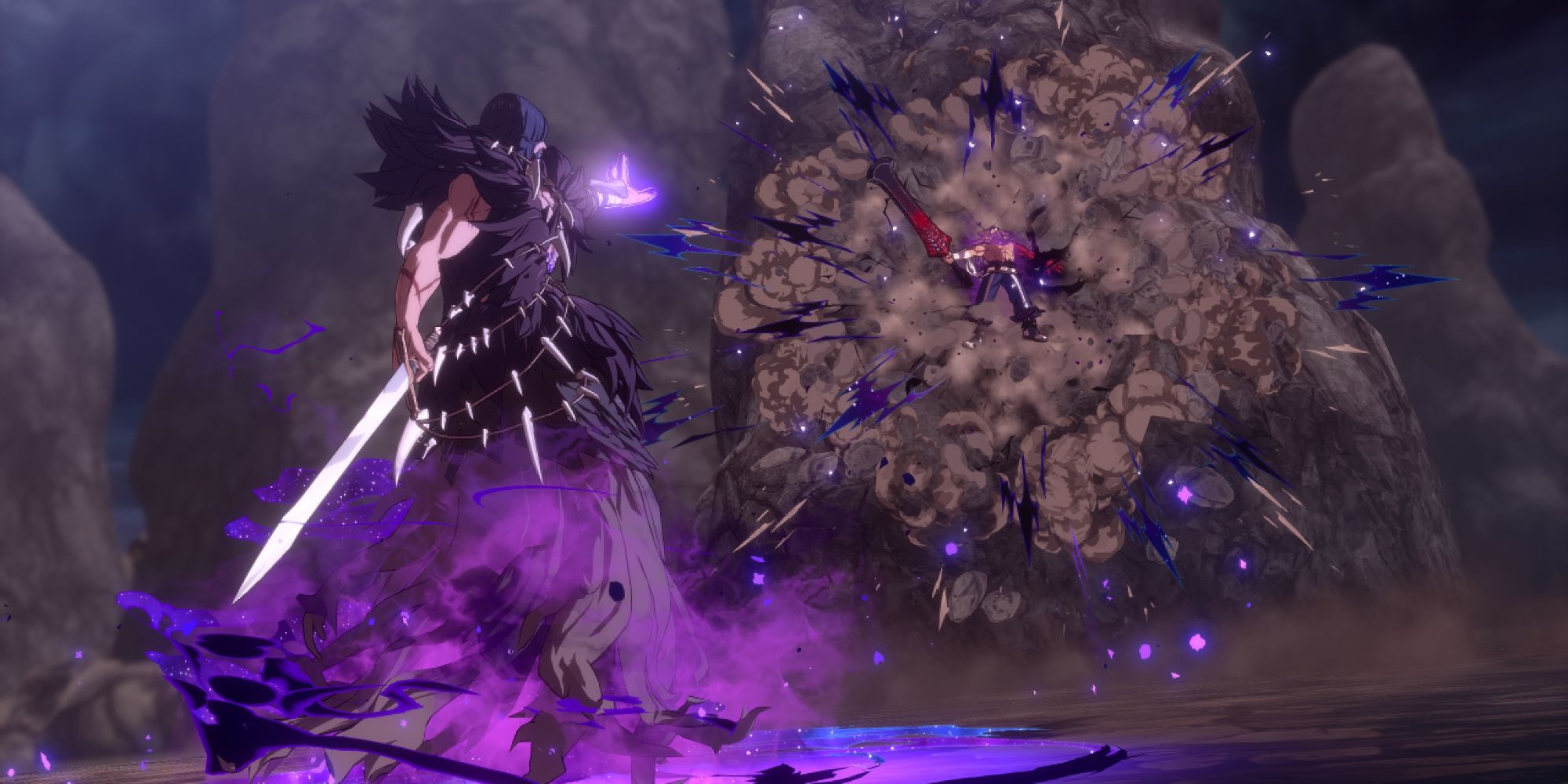 As expected, Lost Warrior also has access to an Awakening Skill and Effect whenever his health pool reaches 30 percent or less during a round. To catch those unaware up, Awakening Skills are DNF Duel's version of Ultimates or Supers you undoubtedly saw in any other fighting game before. And the Awakening Effect is an often passive buff or enhancement that can help you come back from a rather dire situation. In Lost Warrior's case, his Awakening Effect is a passive buff for another passive buff. He's seriously a bizarre character.

Logic of the Dimensions is Lost Warrior's Awakening Effect, which slightly increases the duration of Time Stop, allowing Lost Warrior to get an extra hit or two in before it ends. Additionally, any time Lost Warrior gains a stack of Engraved Time, his opponent will be frozen in place briefly, giving him extra follow-up options.