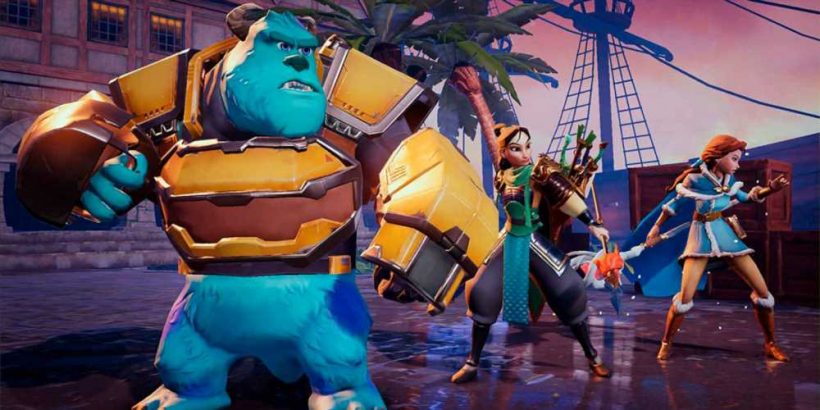 Only Disney adults are going to understand what I’m talking about here, so if that isn’t you, I’m sorry. Disney Mirrorverse is way too cool for mobile, right? You can’t show me a dark fantasy setting starring Baymax and Sully from Monsters Inc. and then tell me it also has ten different currencies, energy refills, and autoplay. The way our favorite Disney characters have been reimagined for this game is filling my Kingdom Heart with joy, but it all feels so wasted on a pay-to-play mobile game that’s going to be expensive and exploitative.

I’ve had my eye on Disney Mirrorverse since it was announced back in January 2020. It’s been available for over a year in regional beta throughout the Philippines, Indonesia, Singapore, New Zealand, and a handful of countries in Europe, but I was starting to think it was never going to come stateside. McFarlane already has an entire toy line based on the game too, which you can buy on Amazon… which I did. Until today, there was never any indication that Mirrorverse would ever leave beta, and most people completely forgot about it already.

It’s finally launching worldwide on June 23, and if you haven’t heard of it before, you can check out the trailer. Disney Mirrorverse is an action game that reimagines Disney and Pixar characters as classic RPG heroes. The trailer shows Belle as an arcane mage, Sully as a mech-suited tank, and Maleficent as a draconic mage that wields fire and lightning. In the game, you build teams of three guardians in the traditional holy trinity style – support, tank, and DPS – to fight legions of baddies and protect the Mirrorverse from destruction.

The game already has nearly 50 playable characters, and each one is better than the one before. Gaston fires a crossbow made out of stag antlers and wears an entire wolf around his shoulders. Oogie Boogie wears a leather jacket and wields a spiked shield and glowing flail. Snow White has a double-sided pickaxe that she uses to cave in her enemies' heads. Baloo spins a plane propeller to chop dudes up. I don’t know how else to explain how incredibly cool and different Mirrorverse is. Kingdom Hearts didn’t even have the balls to give Mike Wazowski double shotguns. The Rock is in this game as his character from Jungle Cruise and he has a demon arm, presumably for strangling.

I get so excited looking at the character designs for Mirrorverse, but then I remember it’s a mobile game, and I deflate. Don’t get me wrong, I’m a huge advocate for mobile as a platform for games and I’ve gotten a lot of use out of Game Pass, Google Play Pass, and Stadia on my phone. There’s plenty of high-quality, non-exploitative mobile games out there, but unfortunately, Disney Mirrorverse is not one of them. You can look at Kabam Games’ other titles for evidence, like Marvel Contest of Champions or Shop Titans: Craft & Build, or you can look at the countless hours of game footage that are already on Youtube from the beta period. Mirrorverse has an energy timer that restricts how much you can play, unless you’re willing to buy more energy. It has a complicated currency system designed to obfuscate the actual cost of things and distract you from understanding how much you’re spending. It has blind pulls. It has autoplay. Maybe it will be fun, but it looks like the worst kind of mobile game.

Most cash-grab mobile games are also creatively bankrupt, but Mirrorverse isn’t. It’s hard to see such a great concept wasted on such a predatory genre. Worse, its existence precludes a real game from doing the same thing, but better. This could have been a Pokemon Unite-style MOBA, or Diablo-like dungeon crawler. Heck, it could have been a Disney Infinity reboot and I would have been onboard. Instead, we got a money pit disguised as a game. It’s tragic, really. Dwayne “The Demon Arm” Johnson deserved better than this.