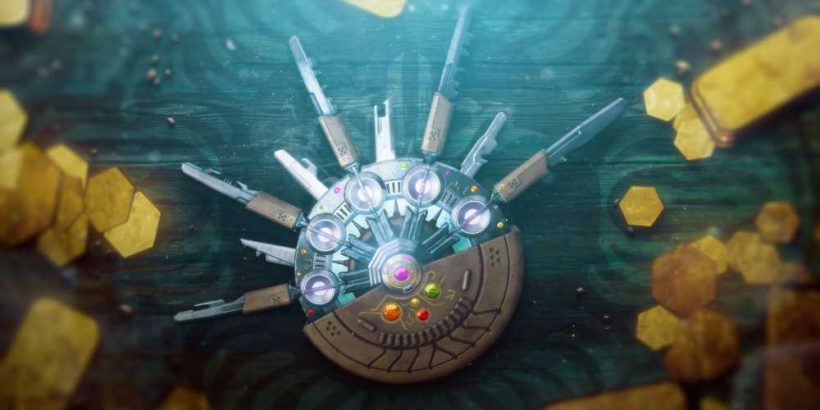 A new Destiny 2 season means there's a new Artifact to upgrade. Season of the Plunder's Artifact is the Skeleton Key, not to be confused with the original Destiny's Skeleton Key system. With 25 mods to unlock and tons of powerful options, this season's buildcrafting potential looks promising.

Some fan-favorite mods like Sundering Glare have returned, and Bungie has thrown in a few new surprises like Lightning Strikes Twice. Overall, this Artifact biases Arc builds, Machine Guns, and long-range weapons. Let's go over all 25 mods tied to this season and explain how they work. 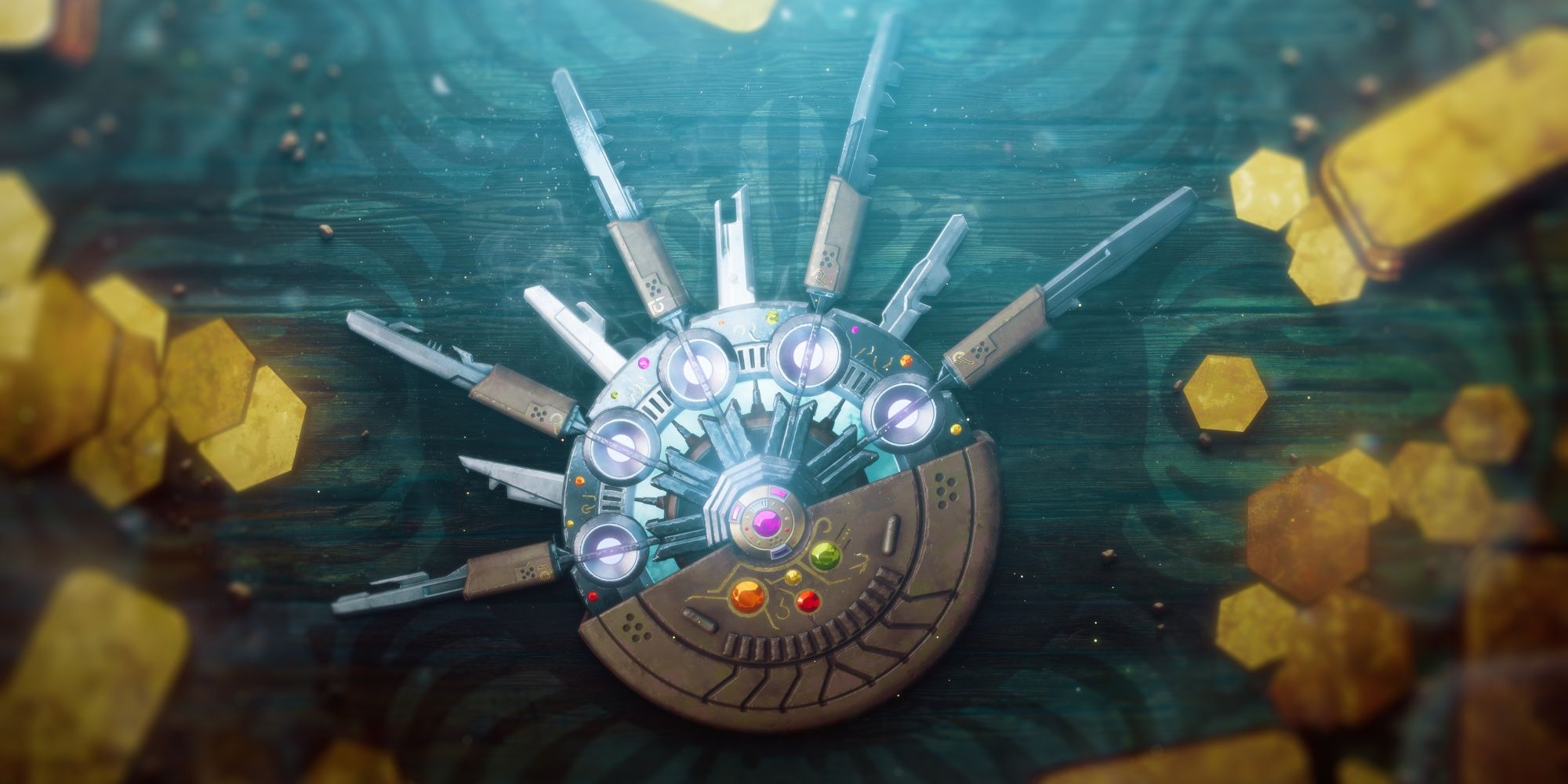 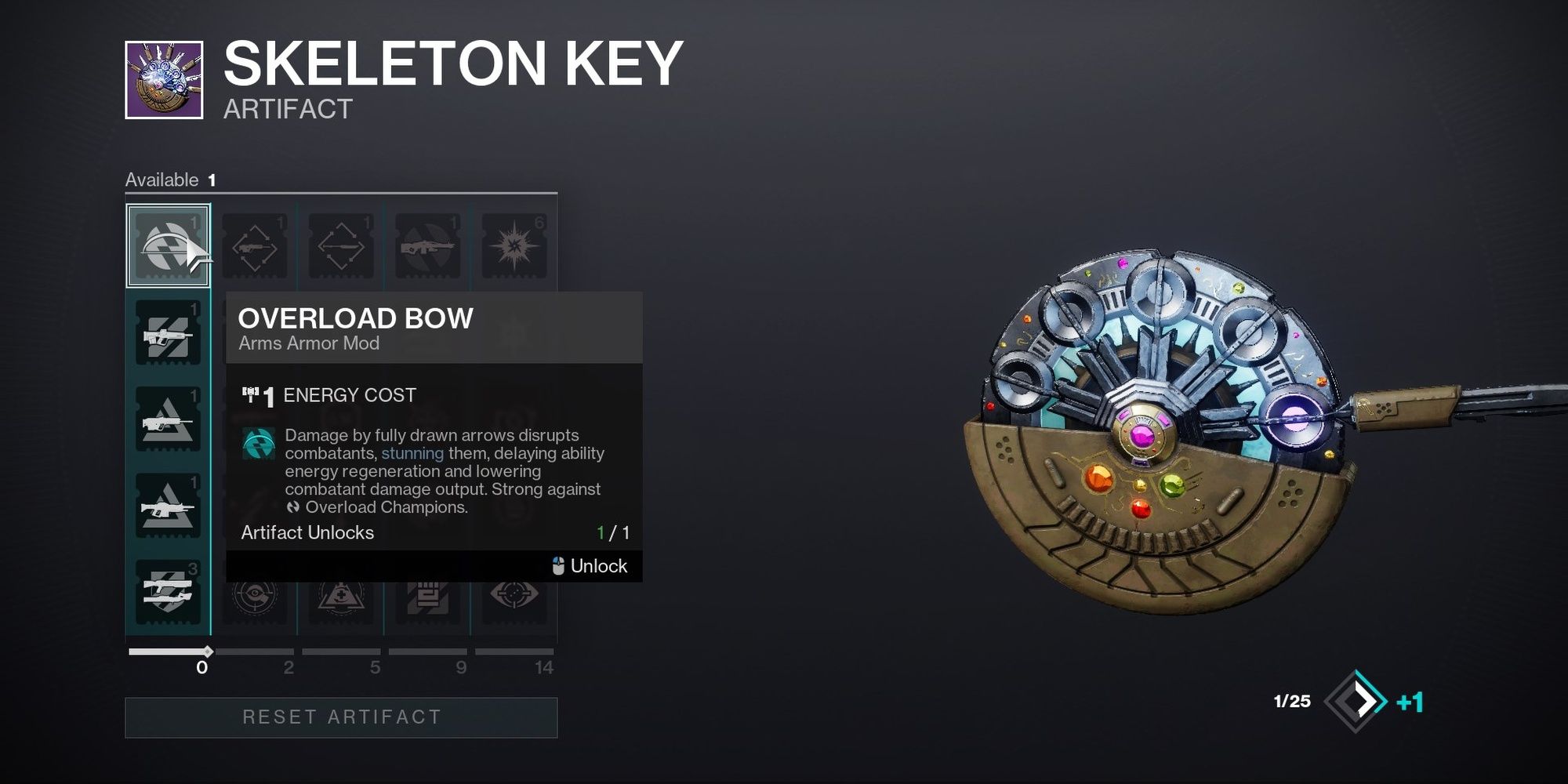 Overload Bow is going to be your best source of Overload stun this season if you aren't running Arc 3.0. Fully drawn arrows are guaranteed to stun a Champion. Precision Frames and Bows with high Stability have a larger perfect draw window, making it easier to stun a Champion. Leviathan's Breath does not gain Overload arrows with this mod equipped.

Unstoppable Pulse Rifle gives your next burst the Unstoppable property when you ADS for a short time. A single bullet from this supercharged burst can stun an Unstoppable Champion.

Unstoppable Shotgun causes all Shotgun shells to inflict a stagger, capable of stunlocking majors with a high enough fire rate. Unlike other Unstoppable effects, Unstoppable Shotgun is always active while the mod is equipped; no aiming is required. This mod works with Legend of Acrius and Tractor Cannon. 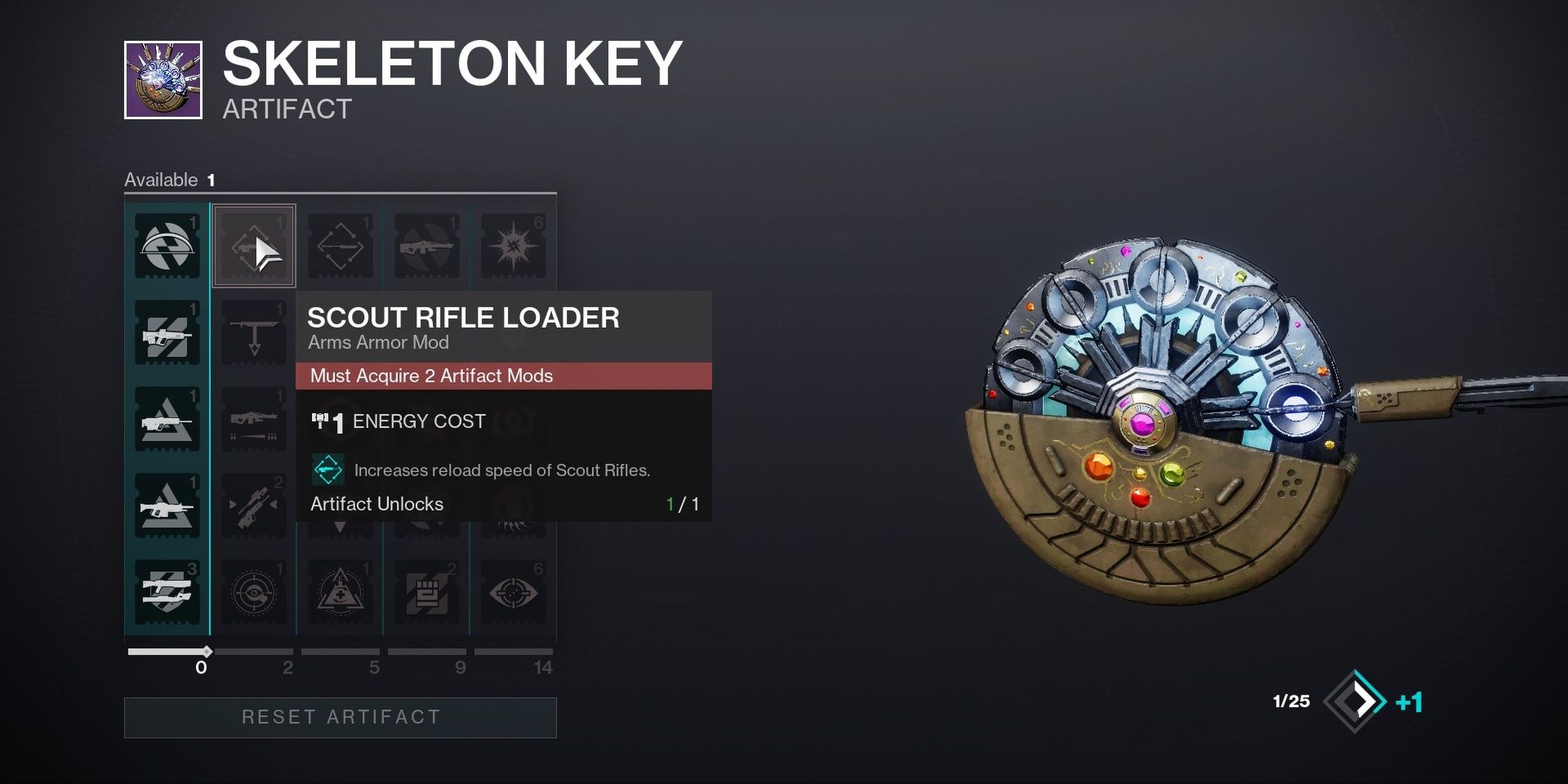 Sword Ammo Scavenger costs one energy instead of its usual four, allowing you to equip mroe expensive mods on your leg armor with ease.

Machine Gun Holster passively reloads a portion of your Machine Gun while stowed for a small energy fee.

Scout and Sniper Targeting grant the effects of their respective targeting mods but only cost one energy and use one mod slot. You can stack both mods on your helmet—three times with an Artifice helmet—with diminishing returns.

Bottomless Bounty buffs the strength of Right Hook and Runneth Over, two Origin traits that were added this season. Right Hook is tied to the new Plunder weapons. Runneth Over is Origin Trait for King's Fall raid weapons. 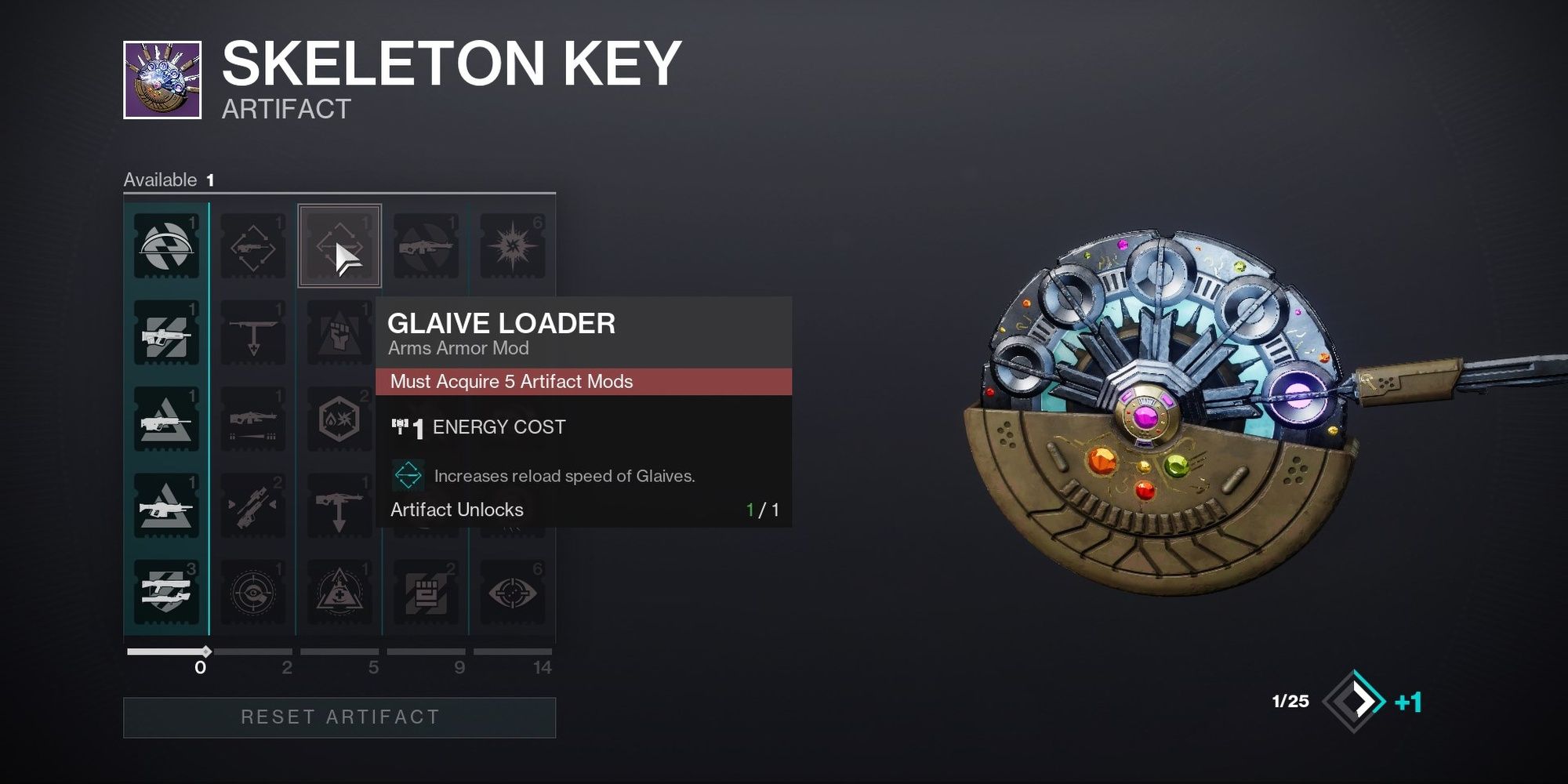 Glaive Loader is a cheaper version of the standard Glaive Loader mod. Its effects are the same as its non-Artifact counterpart.

Focusing Strike grants a small chunk of class ability energy when you deal melee damage. You can stack this mod to increase its effect, although it's not recommended since it takes the same mod space as Champion mods.

Arc + Solar Resist grant 15% damage resistance against both damage types, stacking multiplicatively with other DR sources. Stacking this mod with itself has diminishing returns.

Machine Gun Ammo Scavenger is a much cheaper version of Machine Gun Scavenger for your legs, making it easier to socket stat mods or more expensive Combat Style mods. 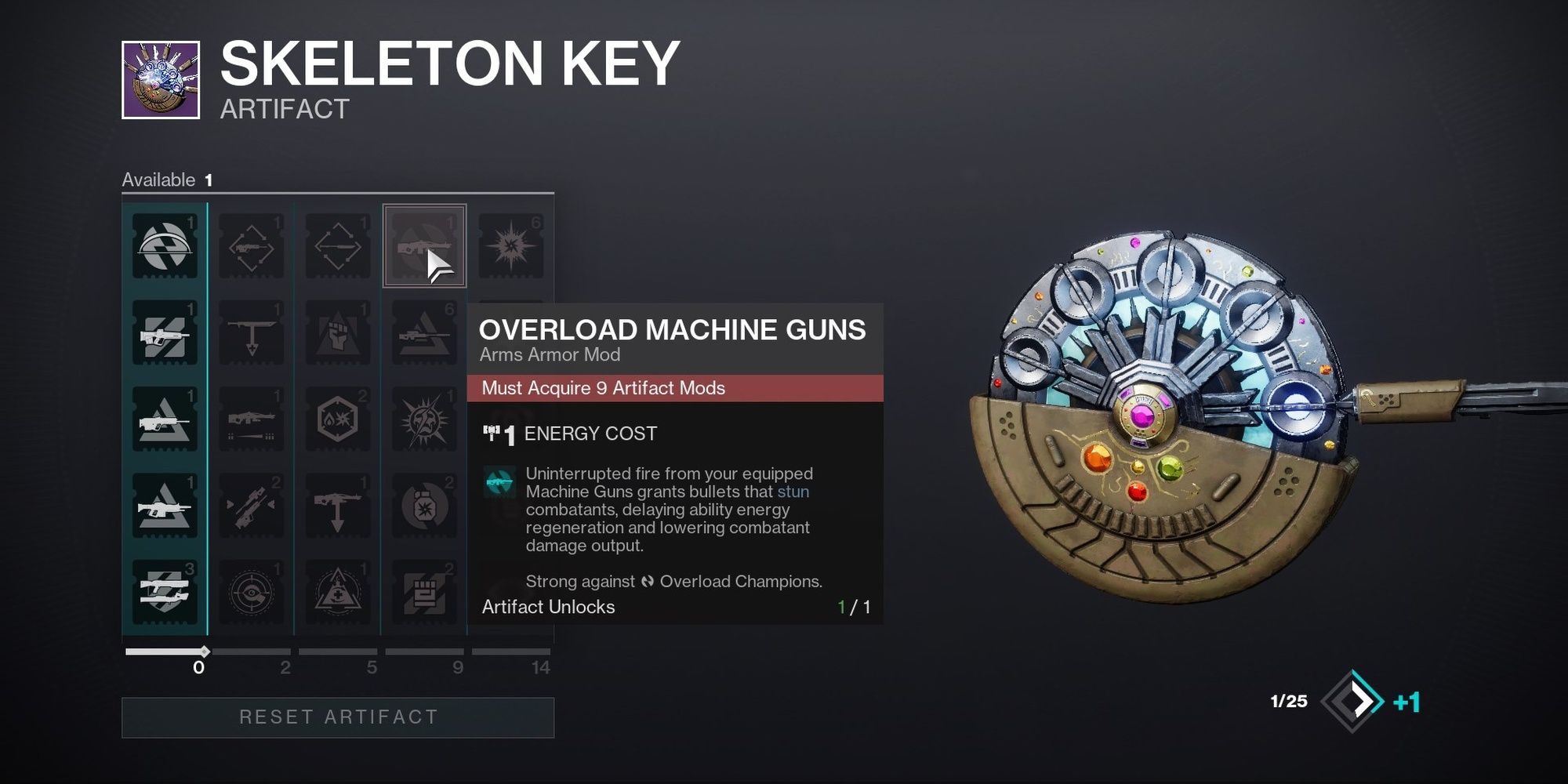 Overload LMG is a one-point arms mod that works for all LMGs that don't already have an Anti-Champion property—so everything except Thunderlord. Only a quarter of your magazine needs to be expended before the Overload property kicks in.

Anti-Barrier Snipers is back from Season of the Chosen, granting all Sniper Rifles the ability to pierce Barrier Champions shields and immunity shields/phases on certain Vex and Cabal units.

Bad Amplitude allows you to inflict Jolt on any Champion simply by damaging them with an Arc ability. Grenades, melee abilities, Supers, and even class abilities that deal damage can trigger this mod.

Surge Detonators gives your Arc grenades the Overload property, allowing them to stun Overload Champions with a single hit. This works with all grenades that deal damage.

Inferno Whip is a helmet mod this season instead of the usual class item mod. This allows all Solar melee abilities to stun Unstoppable Champions, including Titan's Throwing Hammer and Hunter knives. You only need to hit the Champion once to stun them. 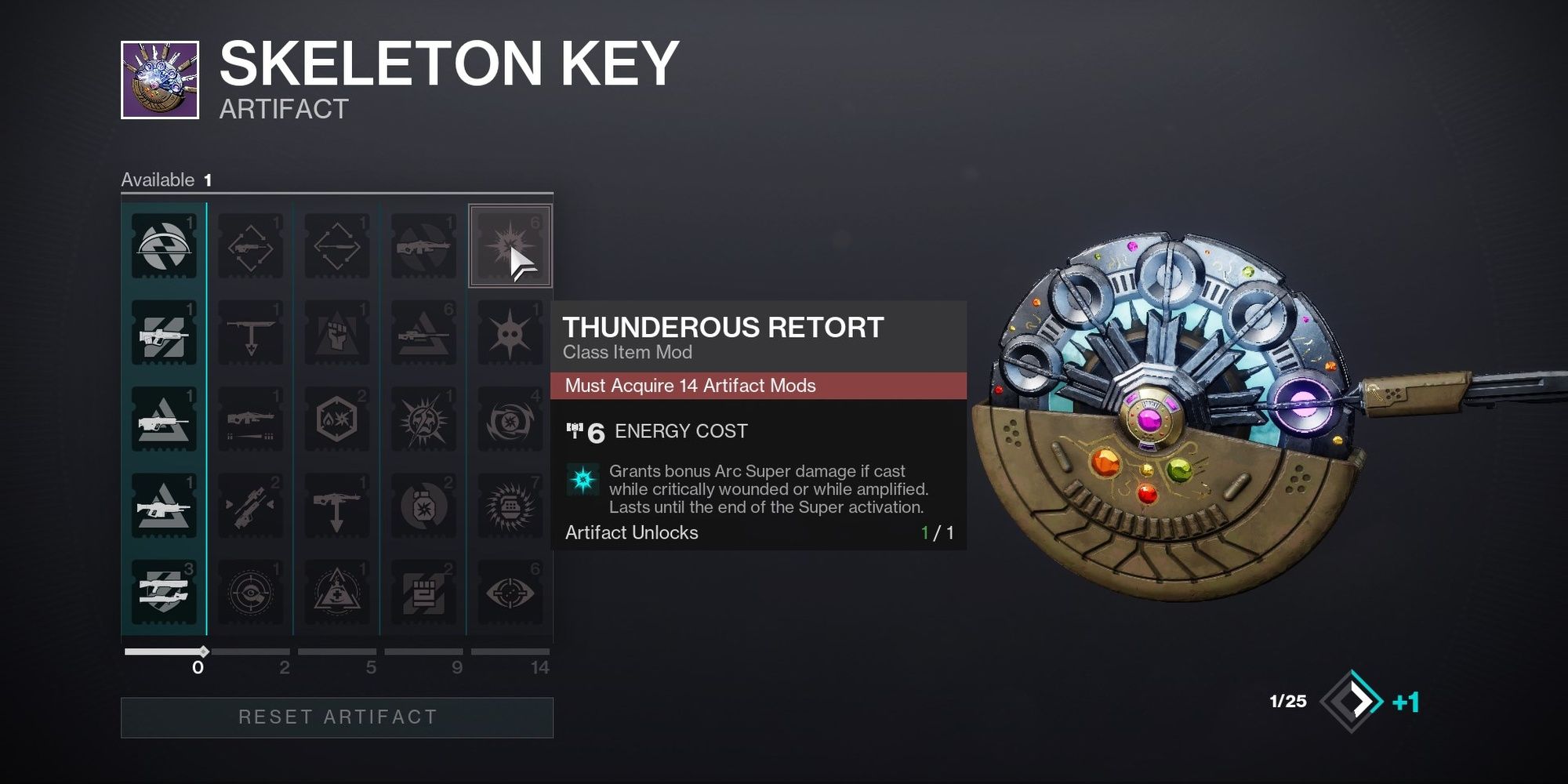 Thunderous Retort provides a 30% damage boost to your Super while you're Amplified or have your shields depleted. This bonus stacks with Super-boosting Exotics like Cuirass of the Falling Star, making the likes of Thundercrash hit significantly harder.

Trace Evidence will spawn an Ionic Trace whenever you slay a target affected by Blind or Jolt. Most Arc abilities debuff your enemy in some fashion, making this a great choice if you want more ability uptime.

Lightning Strikes Twice grants a massive regeneration buff to your grenades for four seconds upon throwing an Arc grenade. Killing an enemy extends the duration of this buff by an additional three seconds, up to a duration cap of 20 seconds.

Sundering Glare is a debuff effect that requires four precision hits on the target from 40+ meters away—Sniper Rifles requiring fewer hits. The target takes 20% more damage for ten seconds while debuffed, and Sundering Glare stacks with other Weaken effects.