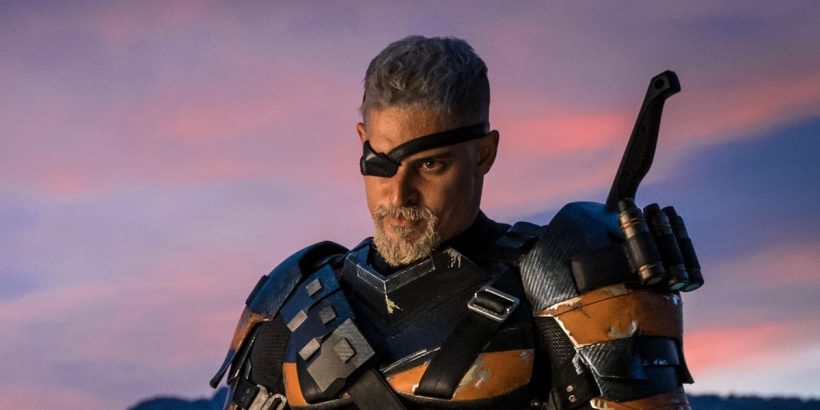 If you’ve seen the original, non-Zack-Snyder-endorsed release of Justice League, you know that DC supervillain Deathstroke, portrayed by actor Joe Manganiello, makes an after-credits cameo with Jesse Eisenberg’s Lex Luthor. What’s not evident from that footage is that the assassin is a hardcore Halo multiplayer fan.

But Deathstroke’s love of the Halo video game series was revealed publicly this week, thanks to an exhibition that shows off the character’s costume as featured in Zack Snyder’s Justice League. The extended, four-hour cut of the DC superhero film further explores the “Knightmare” dreamscape originally hinted at in Batman v Superman: Dawn of Justice. In Zack Snyder’s Justice League it’s where Jared Leto’s Joker resurfaces. And at AT&T’s Discovery Park in Dallas, Texas, fans of Zack Snyder’s DC cinematic universe can see the original Knightmare world costumes used in the director’s superhero saga.

That’s where one fan spotted an emblem on Deathstroke’s sword, which was presumed to be a reference to Batman villain Ra’s al Ghul and his League of Shadows (aka League of Assassins). Deathstroke is a member of that league, alongside characters like Bane and Talia al Ghul.

One fan, Geoff Reeves, posted his discovery on Twitter:

However, another Batman fan, @TheBatstan, challenged that finding, pointing out that the icon on Deathstroke’s hilt is actually an emblem from Bungie’s Halo games.

So how did a Halo multiplayer icon wind up in Zack Snyder’s Justice League (even if it may not appear visibly on screen)? One prevailing theory is that someone involved in the costume or weapon’s design did a Google image search for “Ra’s al Ghul logo.” The first result is that image, after all.

But that runic icon is originally from Halo, just very slightly modified. Here’s the icon’s creator, veteran Bungie artist Christopher Barrett pointing out that he designed that emblem (with the original Adobe Illustrator file to prove it) decades ago:

But how did that emblem be come to be associated with Ra’s al Ghul at all? A fan-fiction creator may be responsible. An author on the fandom-crossover wiki Comic Crossroads used that slightly modified version of the Halo runes icon to represent the League of Shadows in their creation, an alternative comics universe named Earth-5991. In that universe, a fusion of Marvel’s Daredevil and DC’s Batman, Matt Murdock (not Bruce Wayne) becomes the Dark Knight. Here’s the synopsis of that fan creation:

When the young Matt Murdock witnesses his parents being killed in front of him by a mugger, he vows to never allow such thing to happen with the innocent. Departing from his home of Gotham City, Murdock masters both his body and mind across the world, returning to avenge his parents and his city by waging a one-man war against crime as Batman, the Man Without Fear.

The creator of Earth-5991, who goes by Draft227 on Comic Crossroads, has been contributing DC crossover fan fiction work since at least 2014 — well before the 2017 release of Justice League. Draft227 is also the name of a frequent contributor to Halopedia, a contributor-run wiki about the Halo franchise, which would explain how they came across the icon in the first place. Draft227 has also written a series of Halo canon fan expansion stories, dubbed the New Timeline. Now, it appears, their influence has made it into Zack Snyder’s Justice League in a small, bizarre way.

You can try to make out what’s on Deathstroke’s sword in Zack Snyder’s Justice League, where the supervillian will get a bit more screen time, when it premieres on HBO Max on March 18.