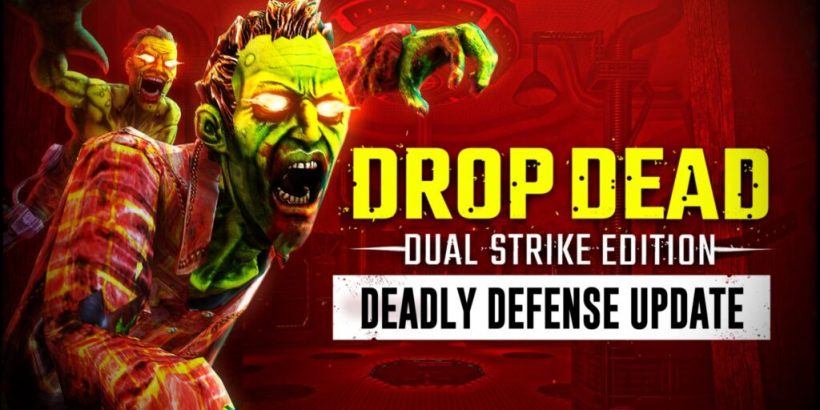 Zombie videogames and horde modes seem to go hand in hand with each other, which Pixel Toy’s series Drop Dead knows all too well. Today, the studio has announced an expansion to Drop Dead: Dual Strike‘s horde mode offerings with Deadly Defense, challenging players with more undead delights.

In Deadly Defense all players have to do is defend a deployed repeater from all those zombie hordes. Just like any horde mode, you need to survive as long as possible with the added bonus should you reach round 30, the repeater will successfully locate the infamous Dr Monday’s secret lair and thus complete their mission.

Becoming a popular zombie shooter for Oculus Quest since its release in 2019, Drop Dead: Dual Strike Edition offers a more colourful, comic-style take on zombie-slaying but is no less intense for it. Just like the other horde modes, Deadly Defense supports co-op multiplayer and of course, the dual-wielding Dual Strike is known for.

Pixel Toys actually began the VR Drop Dead series in 2016 with a far more basic Gear VR edition, followed by an Oculus Rift version in 2017. It wasn’t until the launch of Drop Dead: Dual Strike Edition that the series got its major interactive makeover, allowing players to pick and choose their arsenal; whether they fancied a classic two shotgun combination or throwing in a melee weapon for fun.

While Pixel Toys is still supporting its comedic zombie shooter, most recently the studio is better known for affiliation with the Warhammer franchise. Warhammer 40,000: Battle Sister arrived in 2020 for Oculus Quest putting players in the shoes of Sister Ophelia, part of the Sisters of Battle. And just like Drop Dead: Dual Strike Edition, Pixel Toys added a horde mode to Battle Sister, fighting waves of demons, cultists, Chaos Space Marines and more.

VRFocus will continue its coverage of Pixel Toys, reporting back with further updates.