As threatening and robust as the challenges of Dark Souls 3 are, the trials you face in the DLC are some of the most intimidating and spectacular of the series. Both the Ashes of Ariandel and Ringed City expansions have contributed greatly to the game’s intense difficulty, but their greatest additions are undoubtedly the new bosses you encounter.

These bosses are all quite difficult, as they’re intended for most players to first explore after beating the main game and leveling up quite a bit. Nonetheless, some of them are undoubtedly more powerful and frustrating than others, while many are significantly more forgettable.

7 Halflight, Spear of the Church 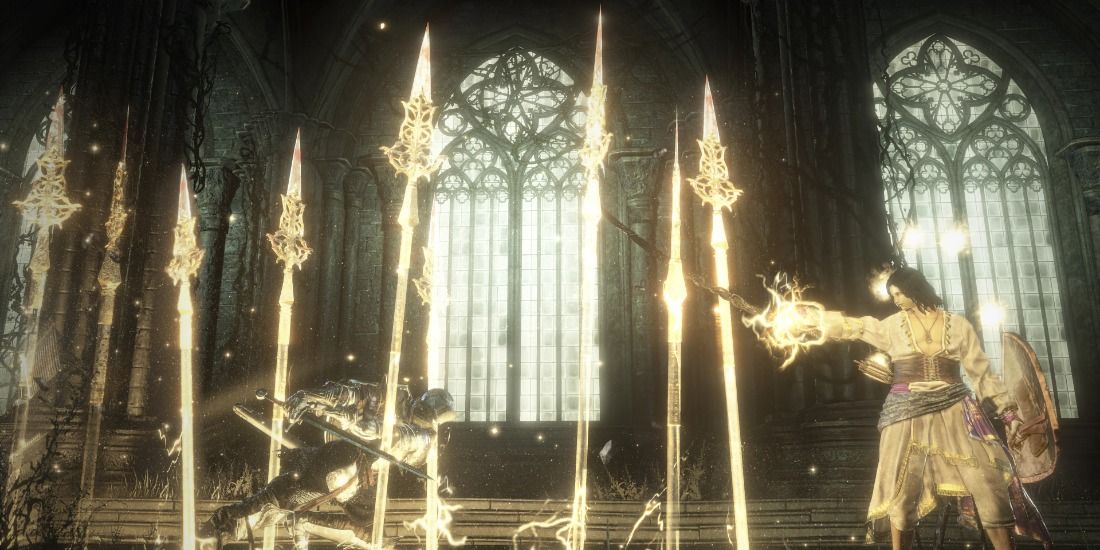 While Halflight might be on the easier side, it’s more because this boss’s strength is extremely varied compared to other opponents throughout the Dark Souls series. This is because, alongside the titanic Judicator Argo who you can quite quickly defeat, Halflight will take the form of a human opponent belonging to Ringed City’s new covenant, the Spears of the Church.

Since this is a typical PVP fight, it can range from shockingly easy to nearly impossible. Sometimes the challenge comes in the form of opponents having a latency delay on their actions, and many skilled players can sometimes remain for long periods, but one accident will usually lead to their immediate death. If you aren’t online, you’ll also face an NPC that’s significantly less challenging than most human players. 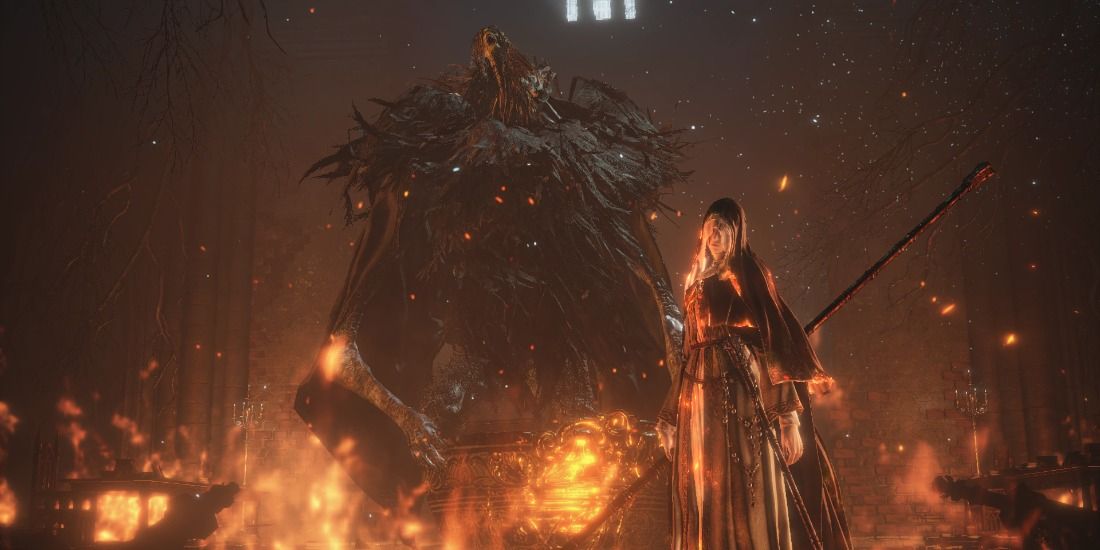 Despite being the final boss of the Ashes of Ariandel DLC, Sister Friede’s fight is surprisingly straightforward. The largest challenge is its length, as the battle goes through three stages that additionally feature the giant Father Ariandel before the two combine forces into one powerful scythe master.

That said, none of the stages are particularly challenging, as both have fairly predictable and slow attacks that are surprisingly easy to dodge. This fight is even easier with the Slave Knight Gale summon sign, which arrives during the second stage to split up the two opponents. 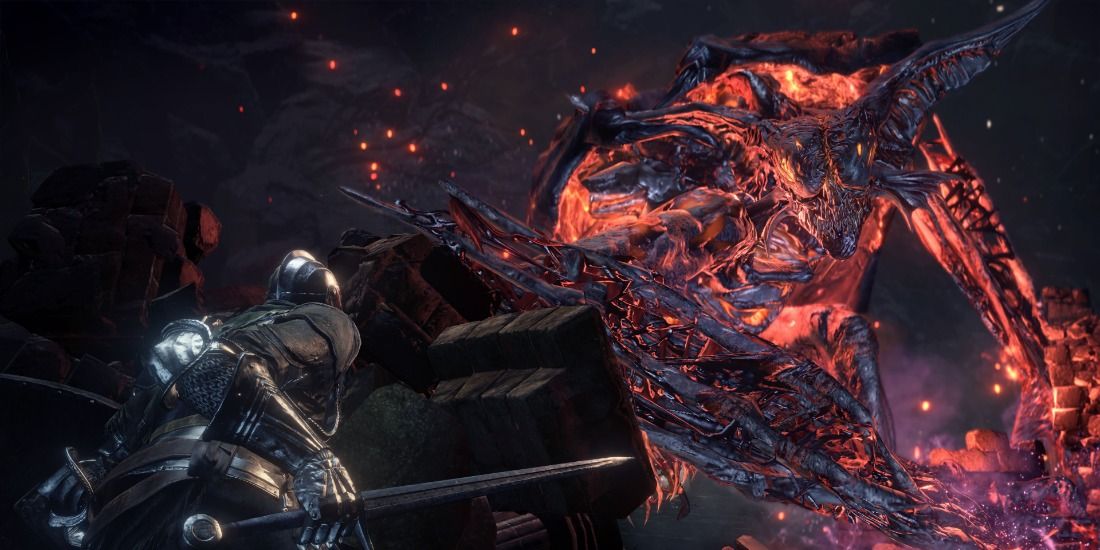 Broadly speaking, having two opponents will always be more challenging than one, and this is what makes the Demon Prince slightly less fascinating than its first form, the Demon in Pain and the Demon Below. This massive demon is certainly faster and has some powerful ranged attacks, particularly a meteor shower that destroys terrain, but it’s far less intimidating as a single foe.

Much like Sister Friede, many of its attacks are also quite slow, and it can be easy to avoid hits by rolling into its body, just like Vordt of the Boreal Valley early on. It’s certainly more difficult than most foes, but there are plenty of options in taking it down that make it much less stressful to deal with. 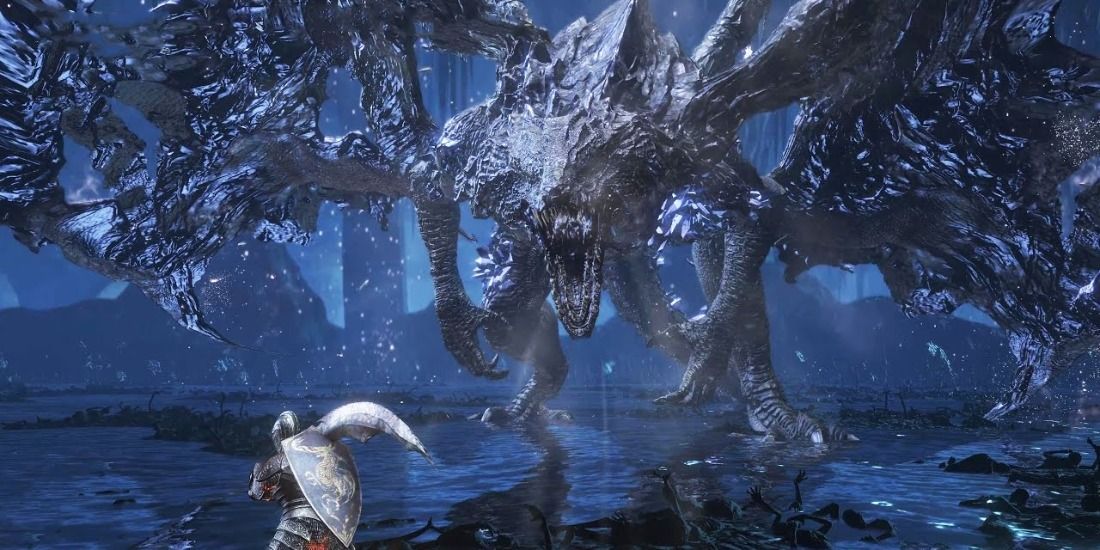 It’s very possible for many players to not encounter Darkeater Midir, being an optional boss in the Ringed City who doesn’t resemble many of the other bosses you face. Unlike the knights and demons, Midir is an incredibly traditional dragon, who simply fights faster than most other dragons throughout the series.

This isn’t to say Midir is easy, however, as its attacks are some of the widest and speediest of nearly any monstrous opponent of the game. Many players are used to running behind dragons to exploit hitboxes or chop off their tail, but Midir will immediately swipe at anyone who gets behind it while covering the environment in fire up front, making for a fight that involves far more moving and sprinting than usual.

3 Demon in Pain & Demon From Below 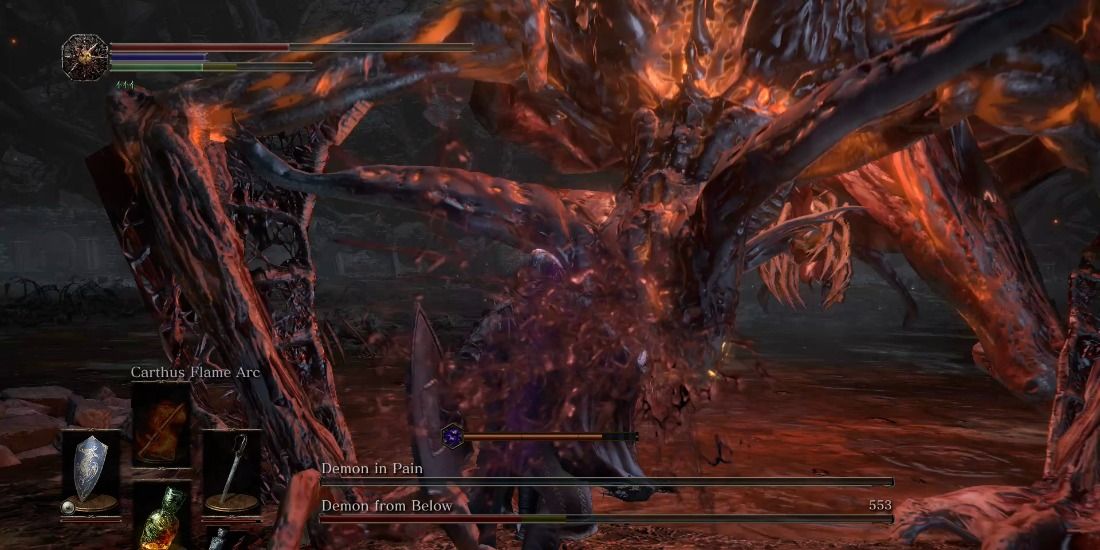 When reaching the bosses with multiple fast opponents, the DLC of Dark Souls 3 greatly lives up to its reputation of difficulty and frustration. As a result, the Demon Prince is hardly as powerful as its earlier forms, a pair of demons that shift between fire and poison attacks alongside their massive physical strikes, with their only distinct weakness being a special stab to the head if you can stagger them with enough damage quickly.

Even if you have an ally who can split things up, these two demons have some attacks that have an incredibly long range, including a breath attack that can badly poison you. Between these traits, and their massive health meters, these two can leave you damaged enough to make the Demon Prince feel far more threatening than he really is. 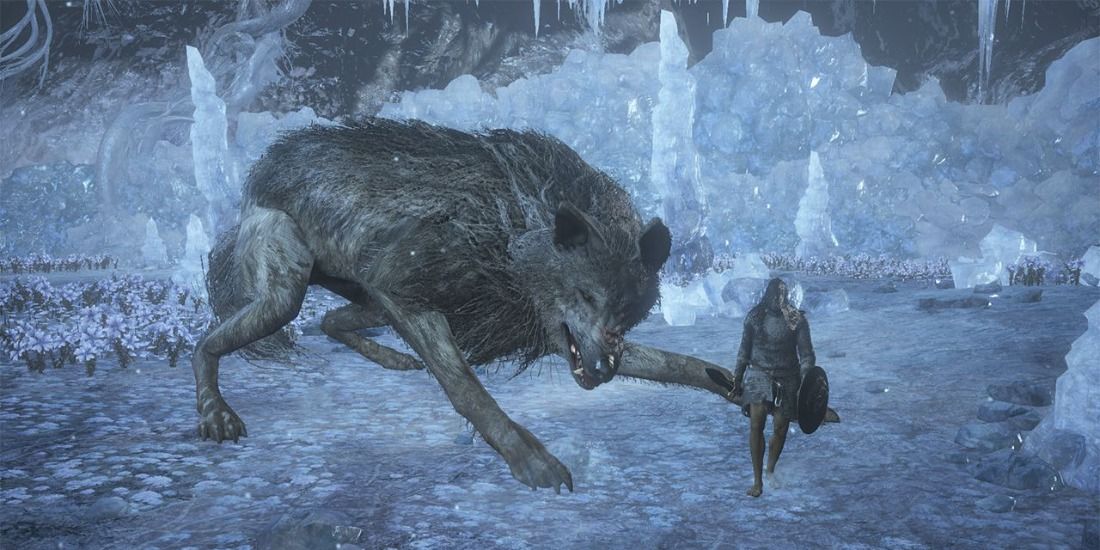 While lacking the later forms of the Demon Prince, the earlier boss of the Ashes of Ariandel content is an immense pain that requires even more juggling. The Champion’s Gravetender & Gravetender Greatwolf don’t just fight you together, but also alongside some weaker winter wolves right at the start that have to be defeated quickly first.

Since the Champion’s Gravetender can block and parry, dealing with it at the same time as the sprinting Greatwolf, this battle can be quickly lost if they both attack you at once. Unlike the demon pair, these two also are significantly harder to juggle and move at different speeds, so fighting them without an ally makes this fight especially more challenging to get a grip on. 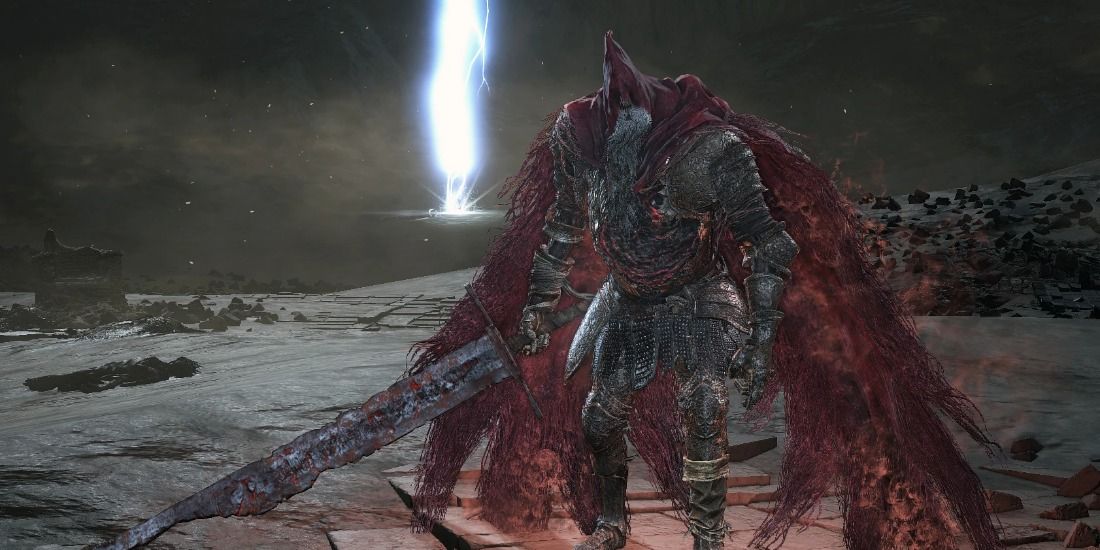 The final boss within the Ringed City, and essentially the final boss of the Dark Souls series, is Slave Knight Gael, who appears early as the warrior who lets you into Ariandel in the first DLC and can be summoned to face Sister Friede. In this form, the knight has been corrupted and grown rabid, and hits with multiple fast strikes with highly unusual rhythms.

The first stage is relatively straightforward, with him dashing towards you lots and giving you more opportunities to hit back, but his second more knight-like stage involves many more attacks that strike in unpredictable amounts, meaning you can often be caught off guard by changing patterns. Taking distance from his furious attacks can’t even save you due to his oddly powerful crossbow and lightning attacks, making Slave Knight Gael the true ultimate foe to prove your skills against. 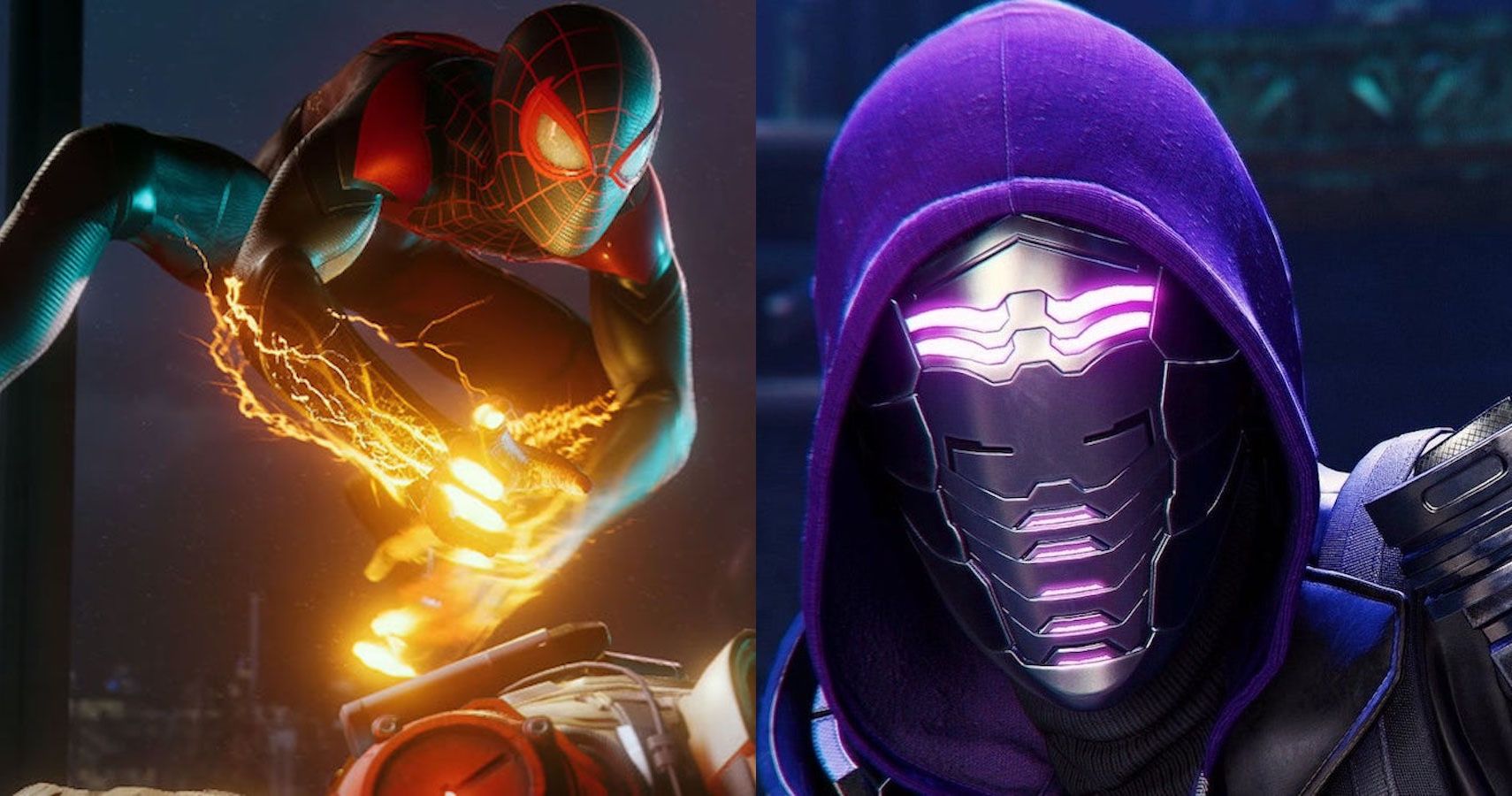 Gene Cole is a Canadian freelance writer with a B.A. in psychology and criminology. He works hard to keep an open mind towards a huge variety of games, and loves learning about how different people make and play them. In his free time he loves wandering aimlessly in Slime Rancher, fiddling with competitive games like Poker and Magic: The Gathering, and (amateurishly) attempting to speedrun Super Mario Odyssey.