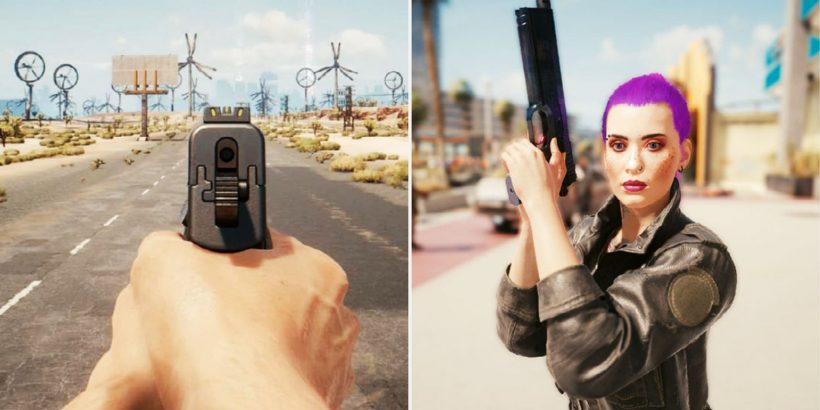 In Cyberpunk 2077 there’s almost a natural push towards a handgun build. After all, with so many amazing unique handguns found in the game, it’s hard to resist turning every single customized V into a Johnny Silverhand-inspired gunslinger. Not to mention, handguns are extremely powerful in the game and the perk tree for handguns is full of highly useful boosts to turn you into a cowboy of the dark future.

However, even with such favoritism towards handguns, it’s pretty overwhelming to sift through every perk and figure out what’s actually worth investing into. Luckily, choosing handguns as your primary skill makes it easy to level up, and so you’ll soon be able to unlock most of the perk tree without much punishment for choosing a “wrong” perk. Still, there are a few perks that do have a slight edge over the rest. 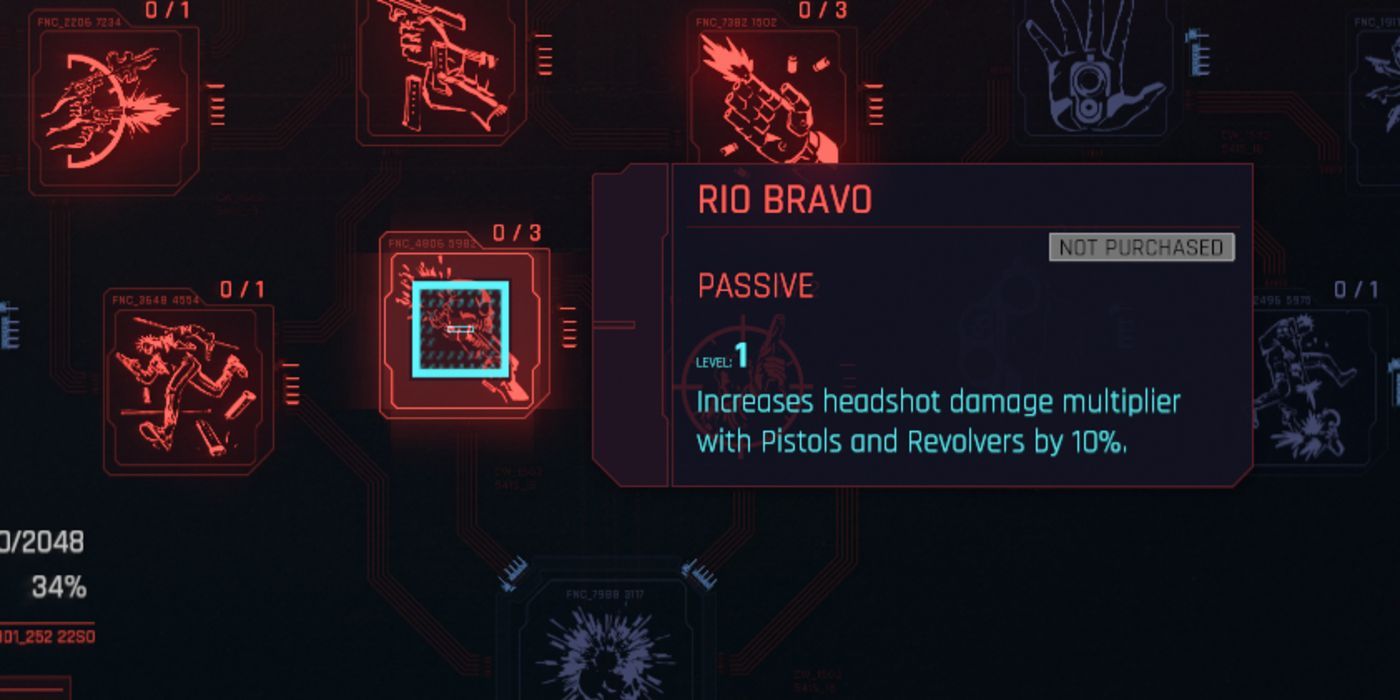 Rio Bravo is an amazing perk which becomes available very early on. In fact, you only need a level 3 in Reflexes for it to become available. The whole idea with handguns is to try and score those cheeky headshots on enemies peaking out of cover, so this perk, a headshot multiplier increase, will come in handy instantly.

The perk has three levels, each of which increases the headshot damage multiplier by 10%, starting at 10% at level 1, 20% at level 2 and 30% at level 3. This should be among the first perks to max out. 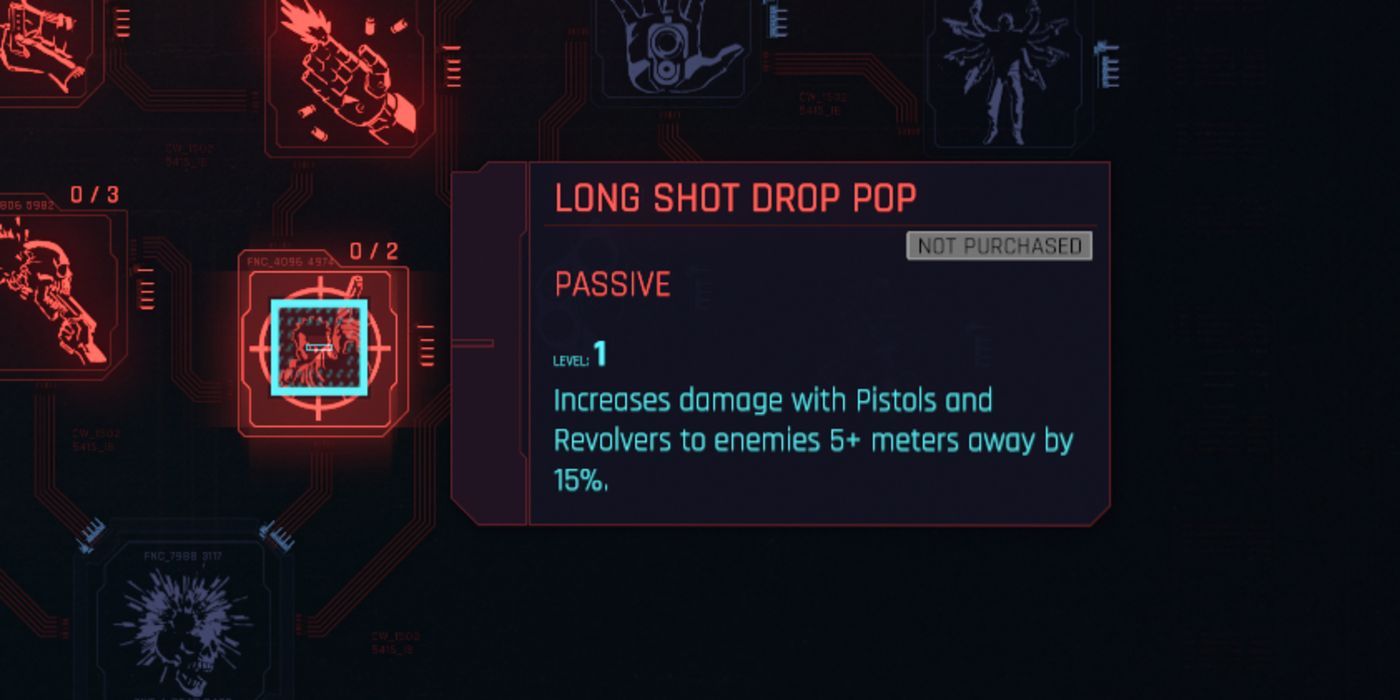 The problem with pistols is that they have limited range. In some missions, you’ll have to move forward quite a bit to engage with your enemies, which can put you into serious danger. That’s why this perk, Long Shot Drop Pop, is a savior for any gunslingers.

Available at level 7 of Reflexes, the perk has two levels and basically increases your damage with handguns to opponents who are more than five meters away, at first by 15% and then by 25%. This will make long-range combat a bit more bearable to handgun specialists, without having to invest in rifles. 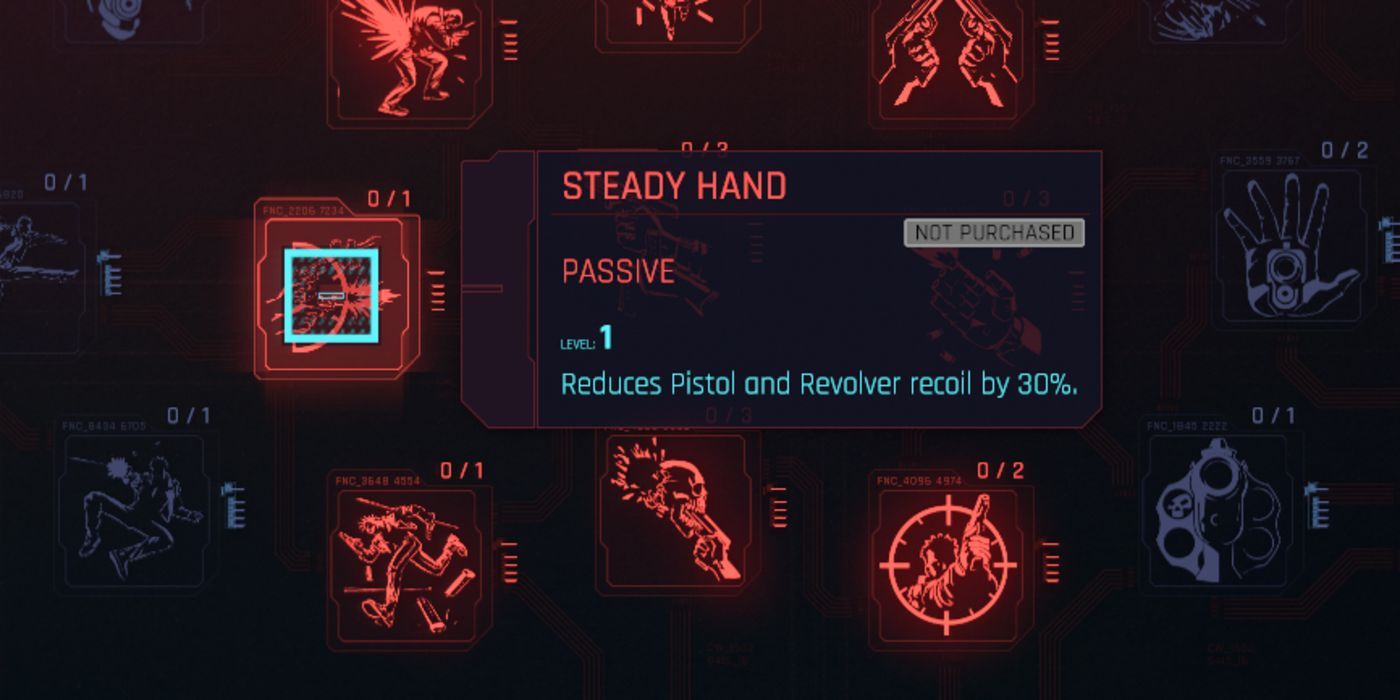 With some pistols, recoil can be a real annoyance to deal with, especially if you find it hard to aim in the first place. To increase your accuracy, investing in a perk like Steady Hand is a good idea, even for decent and seasoned FPS players, as it removes the need for aim compensation.

Steady Hand is an easy perk to pick up since it comes in one level and becomes available at level 9 of Reflexes. It reduces recoil for all handguns by 30%, which is a nice quality of life improvement. 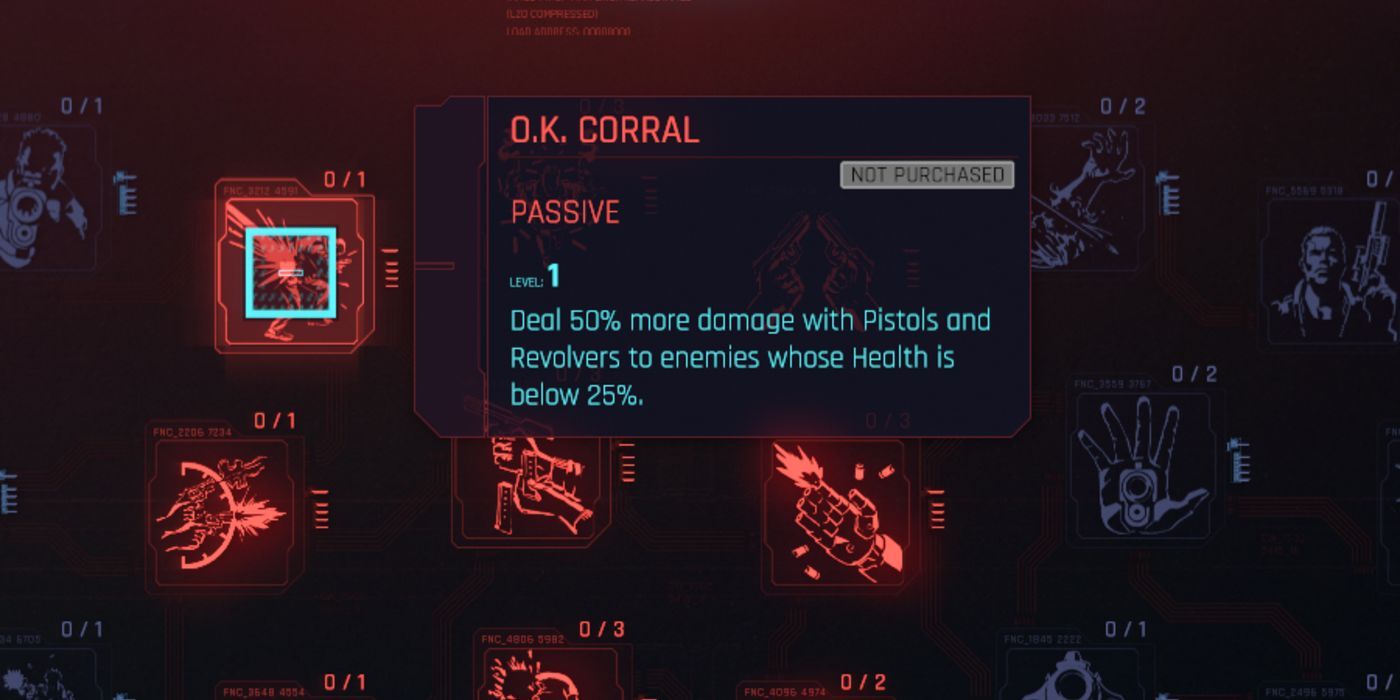 The perk only comes in one level, so it’s easy to unlock. Any enemies who are below 25% of their health will take 50% more damage from your handguns, which is a staggering increase, especially at such an early level as 9 for Reflexes. 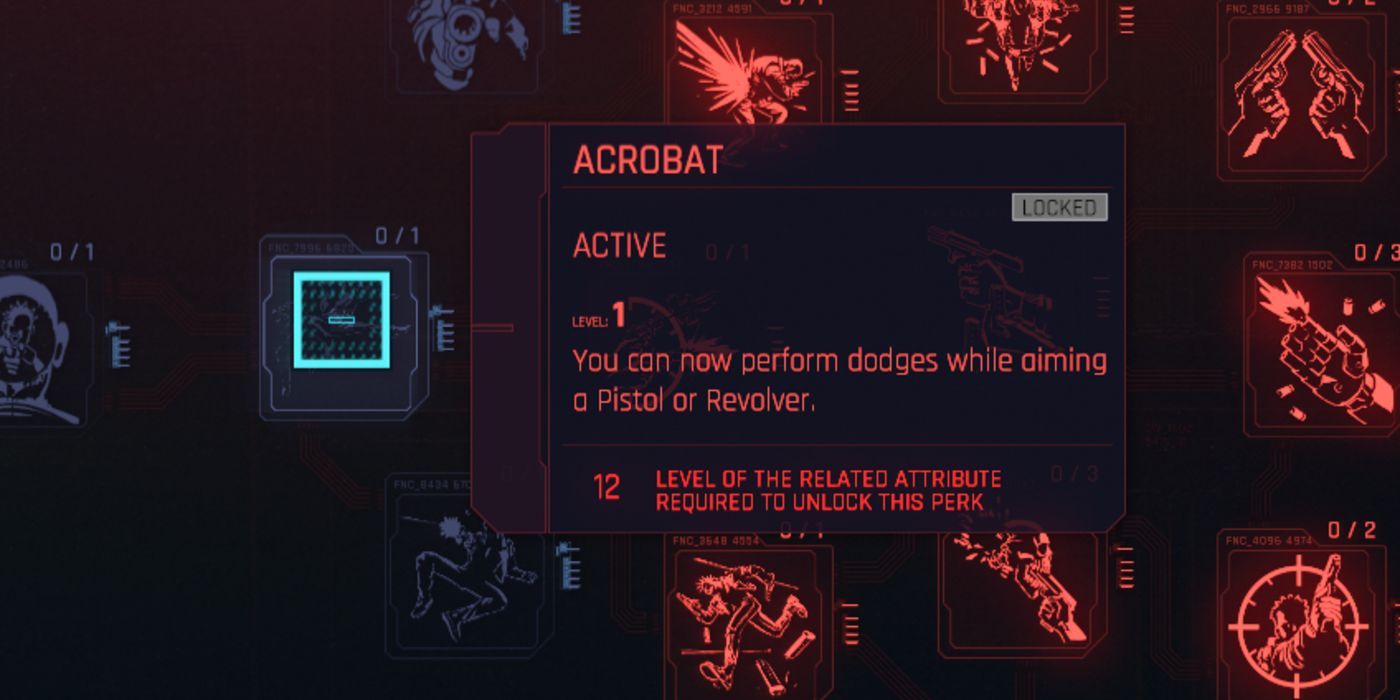 The problem with firearms is that they give you very poor mobility and you move significantly slower when aiming down sights. Handguns are no different from rifles and shotguns in that regard, which is why the Acrobat perk is another must-pick at level 12 of Reflexes.

Once this perk is unlocked, you can actually dodge while you’re locked in aiming down sights animation. It really does change your mobility quite a bit, although it can at times feel a bit buggy if you unintentionally press the keys to dodge. 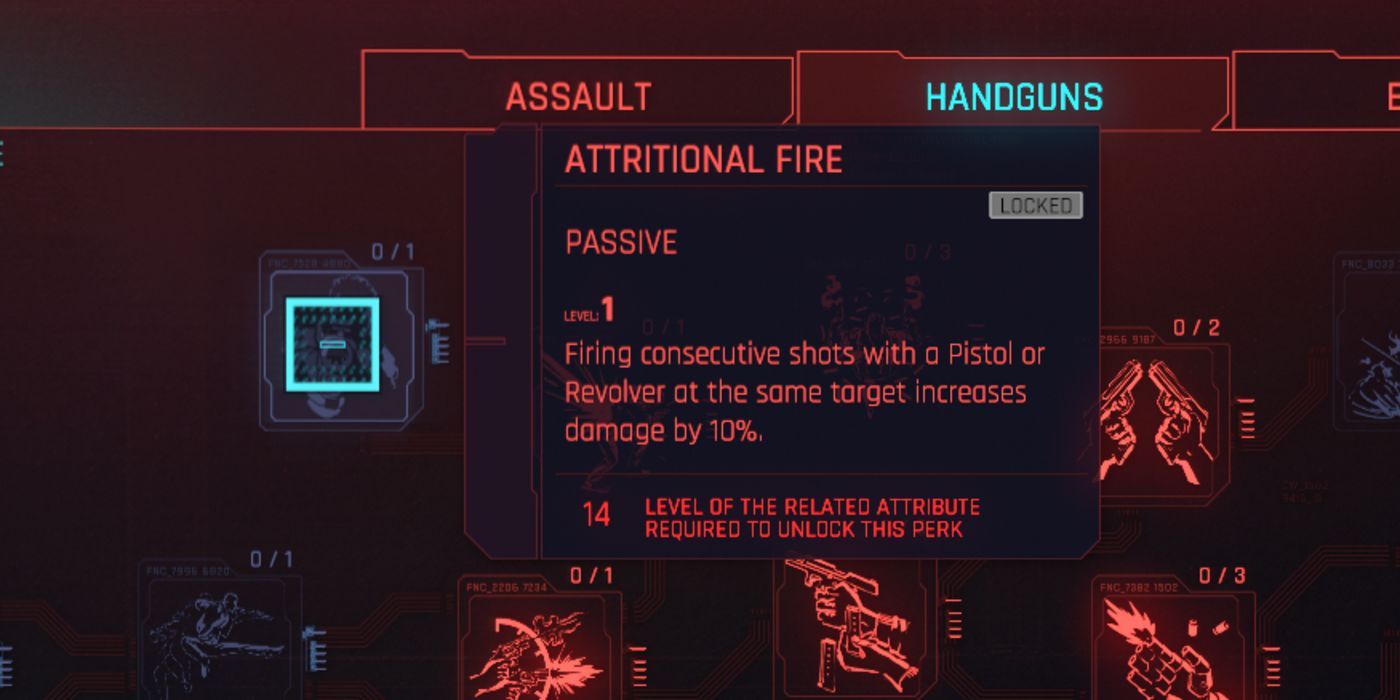 One of the strongest perks towards the mid to late game at level 14 of Reflexes is Attritional Fire. The advantage this perk brings along is absolutely staggering, since it only requires you to unlock it once and it does so much for you.

Firing consecutive shots on the same target with a handgun will basically increase your damage by 10% every time. This might not seem like a lot, but at this point in the game you probably have a decent aim and can secure kills in several shots. It’s a fantastic damage boost and a great for finishing pesky kills. 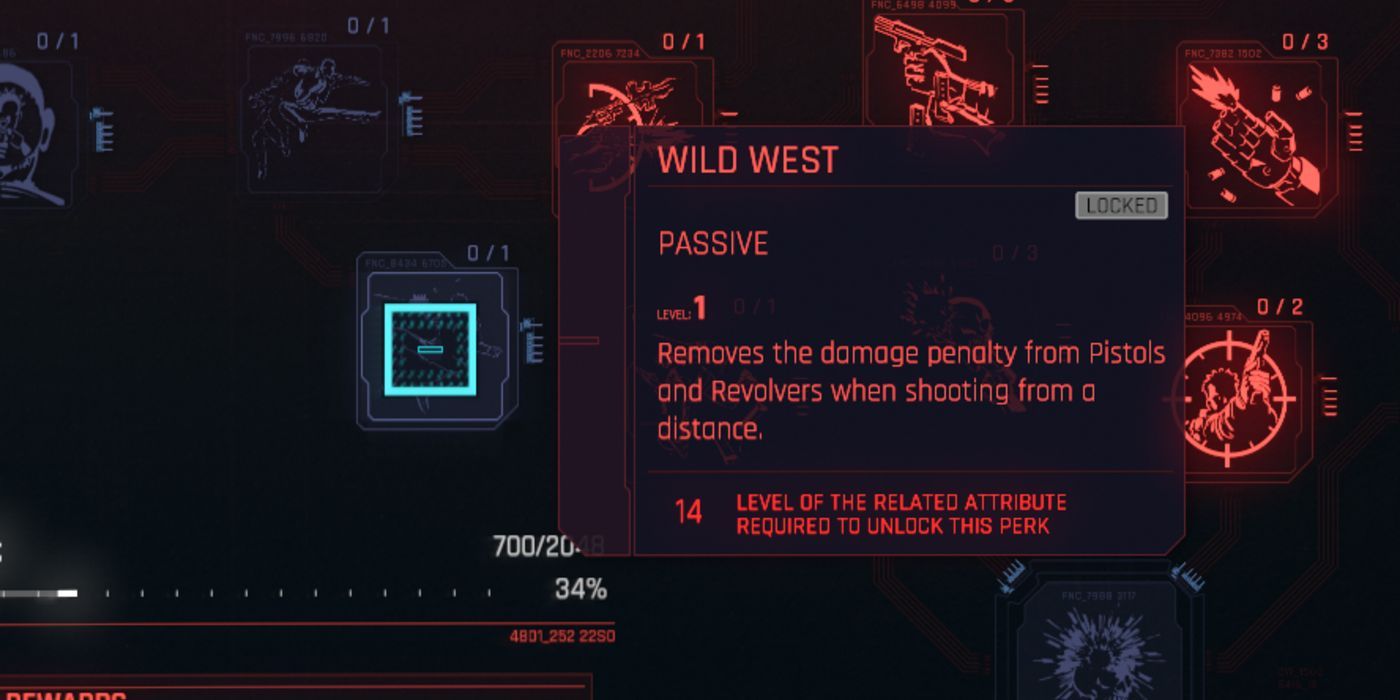 Following Long Shot Drop Pop, this is definitely the next perk to look forward to if you want to make your long-range combat even more bearable. Wild West is a perk that becomes available at level 14 of Reflexes and only requires you to unlock it once.

This perk is insanely powerful, given that it’s granted to you at only level 14 of your primary combat skill. It entirely removes damage penalty from handguns when shooting from a distance, making it ten times easier to engage snipers or enemies you would simply rather keep away from. 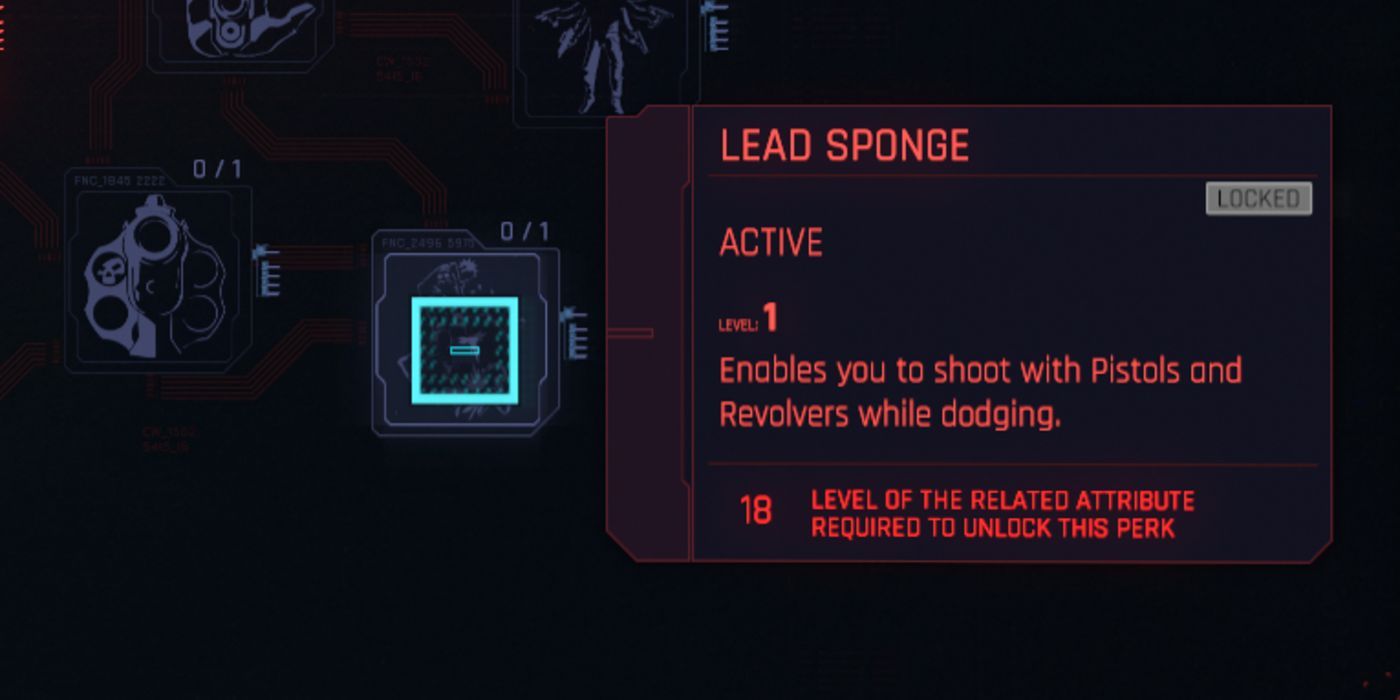 This perk is also related to a previous perk mentioned on this guide, the Acrobat perk. Combine that with this one, Lead Sponge, and you won’t ever have to worry about being a sitting duck as a gunslinger. Your mobility will be that of a cyberninja, or at least somewhat on par.

Lead Sponge is definitely an end game perk with 18 Reflexes required, but it changes pistol play completely. You can finally shoot while dodging, and not just aim down sights while dodging. Combine it with Acrobat, and you’re good to go.

2 The Good, The Bad And The Ugly 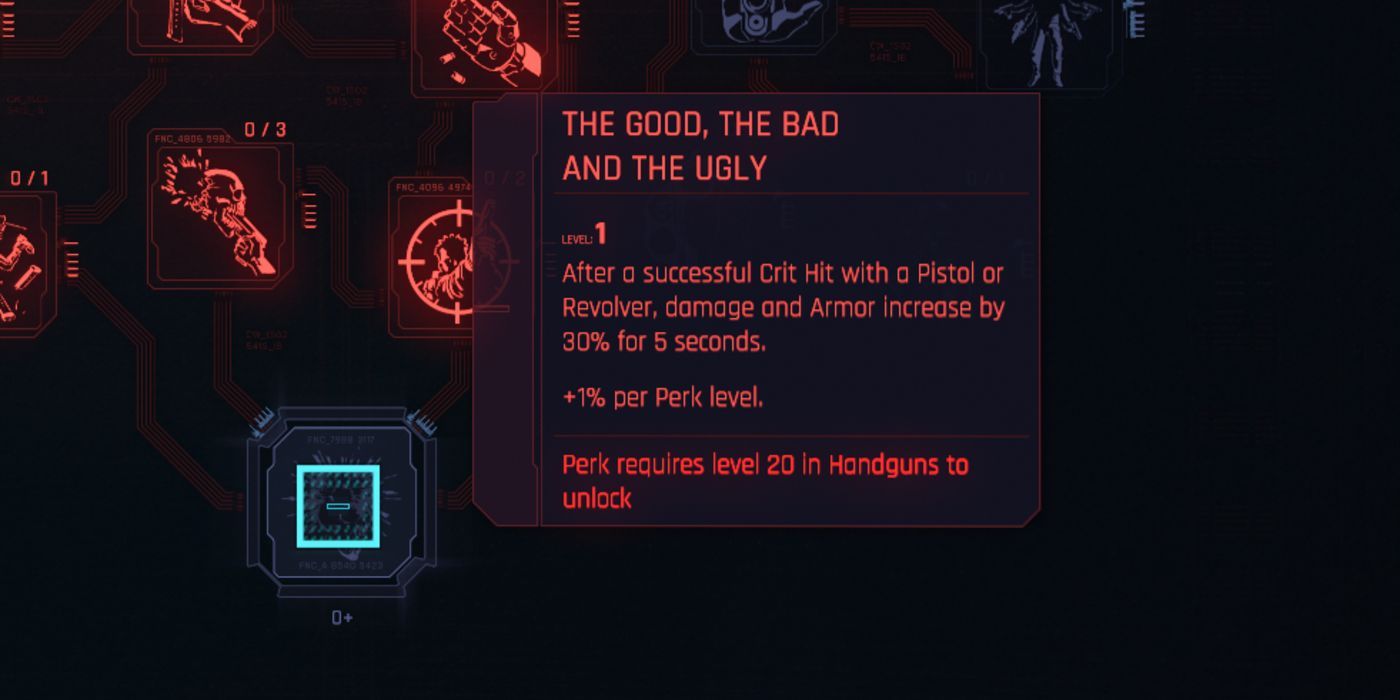 A super late game perk, The Good, The Bad and The Ugly only becomes available when you reach level 20 of your Reflexes attribute. It’s one of the few, if not the only perk, that actually provides a gunslinger with some armor. This is important, given that handgun specialists tend to be squishy.

Whenever you hit a critical strike with a handgun, your damage and armor will be increased by 30% for 5 seconds. This is pretty insane, even if it’s only 5 seconds. If you’re hitting multiple crits, which at this point in the game shouldn’t be a problem, you’ll be dealing staggering amounts of damage almost every engagement. 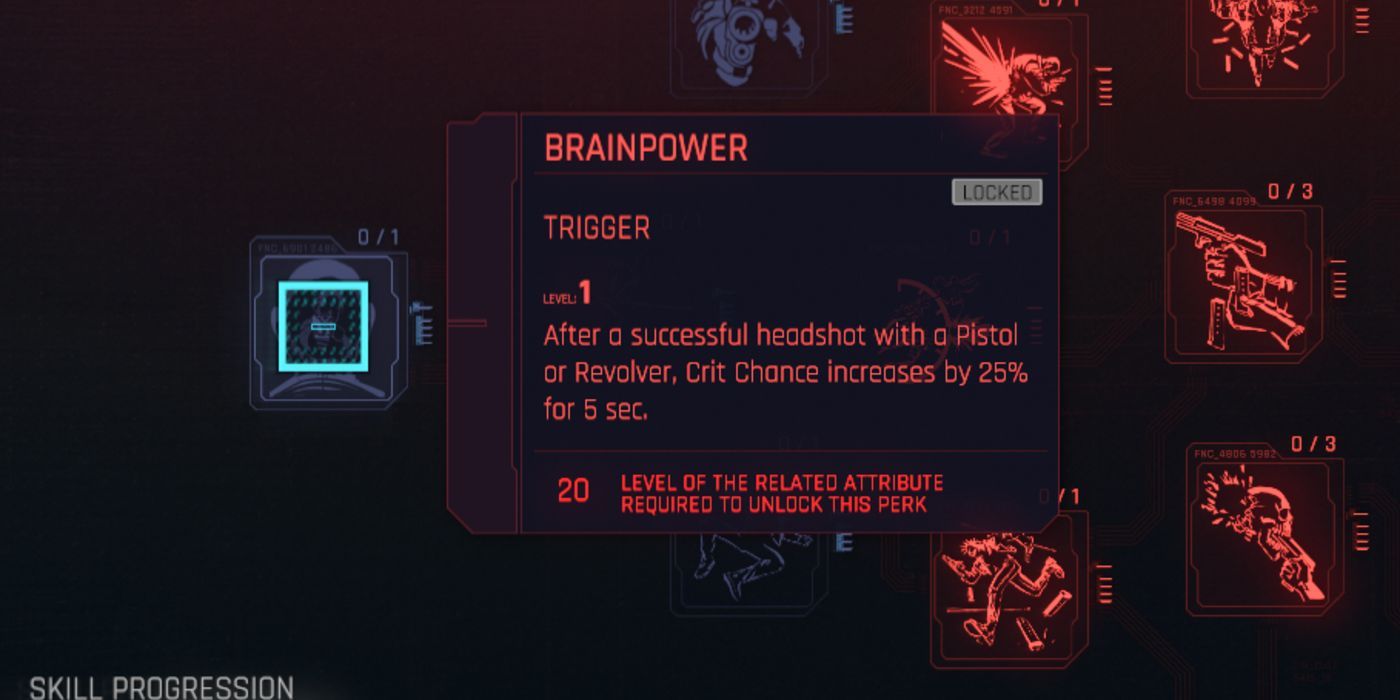 Another end game perk is Brainpower, available once your Reflexes are leveled up to 20. Unlocked only once, it’s perfect for players who like to secure Critical Hits. Whenever you land a headshot with a handgun, your critical chance increases to 25% for 5 seconds.

With good aim and the Steady Hand perk to reduce recoil, this is a great perk to go for if you trust your aim, which at level 20 is probably already fantastic. It’s a simple damage increase, but the effect can last for a while if you can secure several headshots, which don’t even need to be fatal.

NEXT: Cyberpunk 2077: Every District, Ranked From Worst To Best 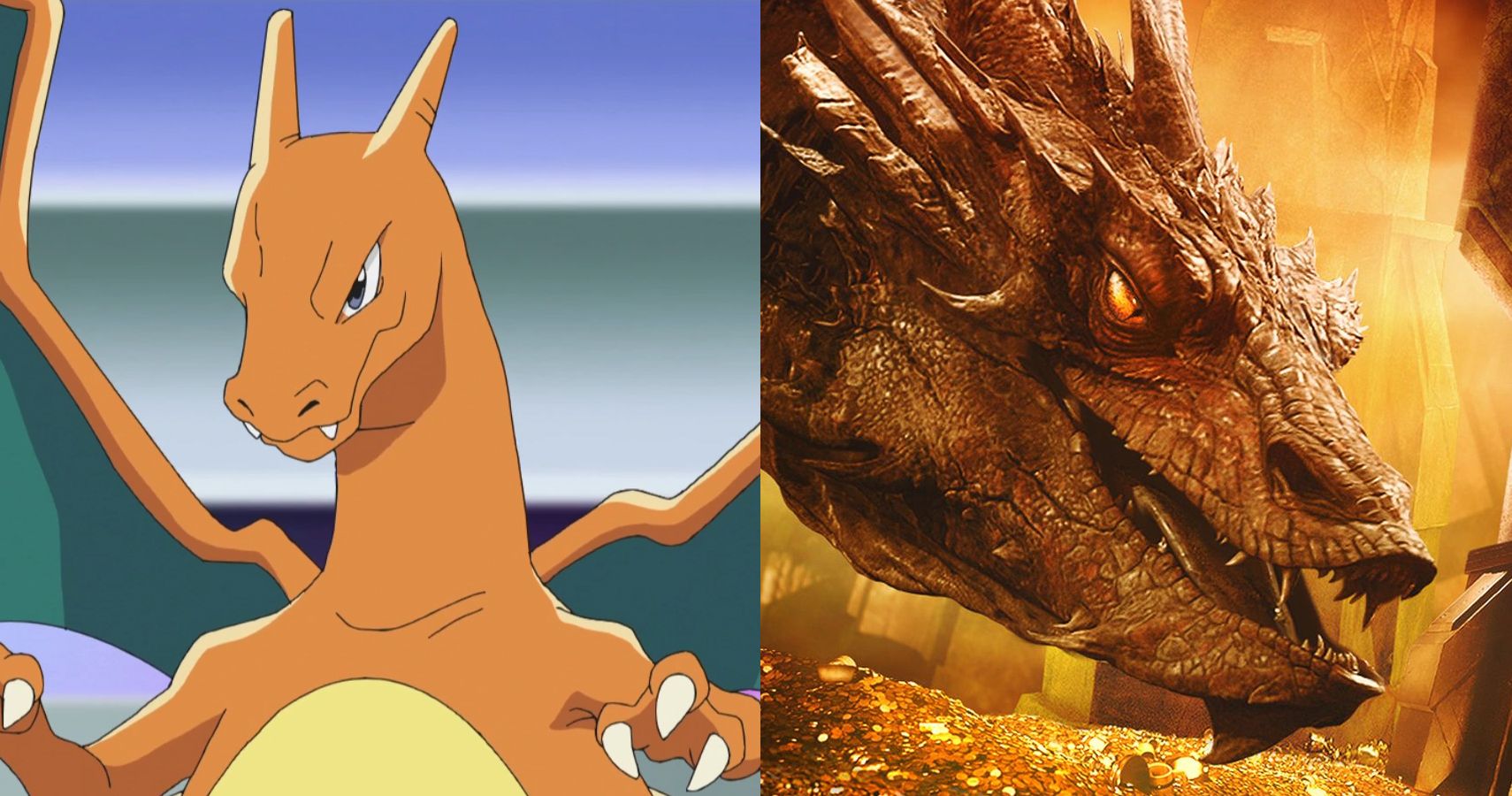