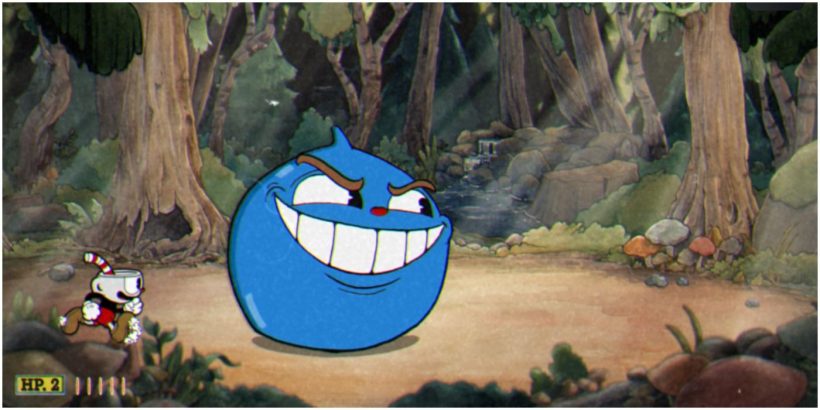 Few indie games reach Cuphead’s level of success. It’s easy to see why this game rose to internet stardom. Melding incredible visuals and music reminiscent of an earlier era of media, it’s an unforgettable gem. The game may be cute, but there’s incredible difficulty hidden beneath the surface. The unprepared are sure to struggle, as Cuphead is one of the most challenging games to come out in recent years.

Those willing to face the challenge presented by Cuphead may need some assistance on their journey through Inkwell Isle. Even the game’s earliest bosses are tough enough to kill players repeatedly. This is true for even the adorable Goopy Le Grande. The second boss of the game has a few tricks and attacks that can throw this porcelain protagonist through the wringer. Avoid the frustration that can come with the challenge by following our guide. 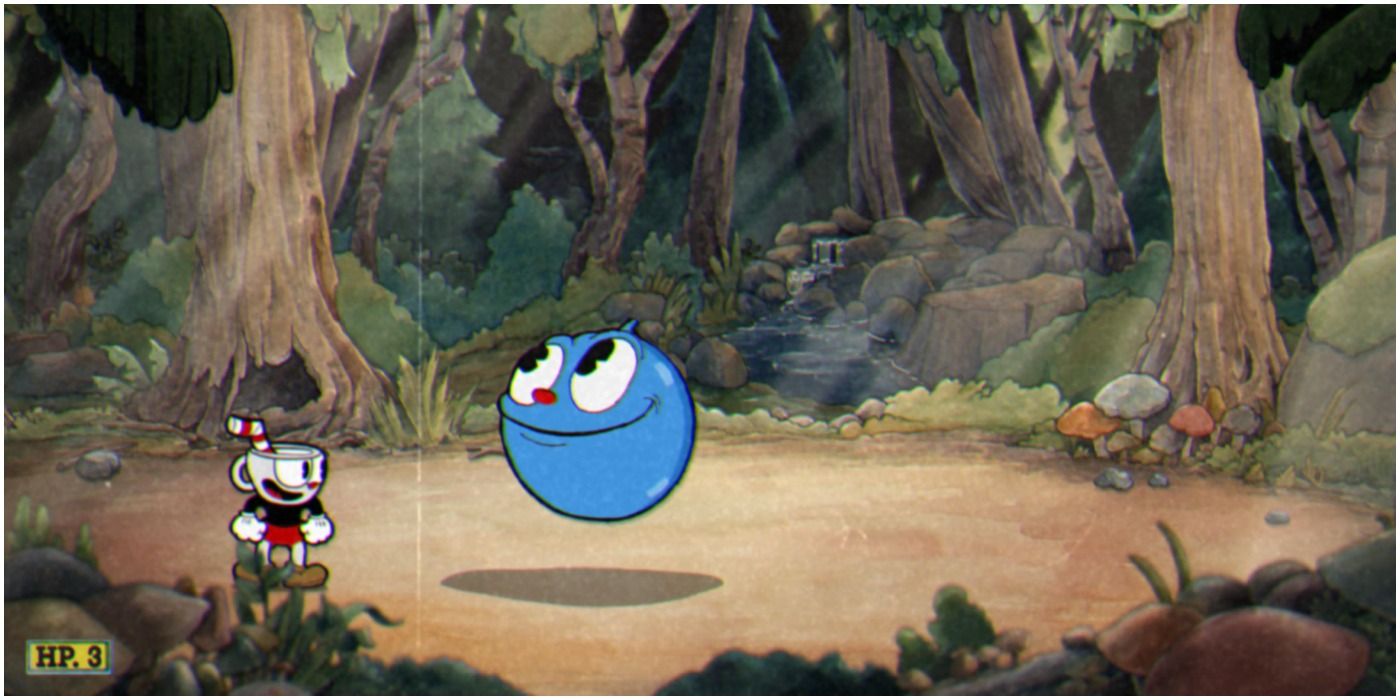 The beginning of the fight with Goopy Le Grande is straightforward. He’ll Glop Hop around the field continuously. Be sure to keep some distance from the ball of goo, as making contact with him will injure the fragile Cuphead. Use your Peashooter at a range to chip away at his health during this portion of the fight. Be patient and cautious to avoid taking damage early on in the fight. 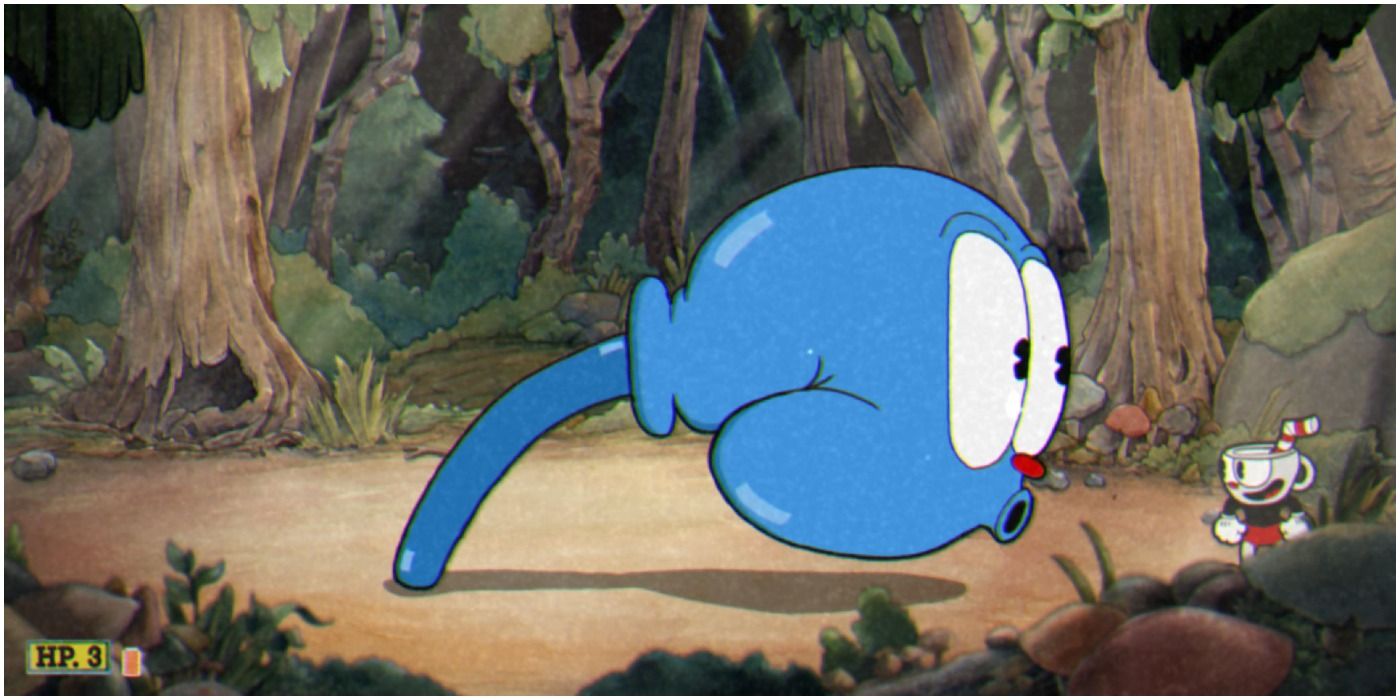 Apart from Goopy’s hopping, he’ll occasionally transform himself into a giant fist known as the Blue Broozer. To avoid being damaged by this attack, players can distance themselves or duck down. Ducking down from up close allows players to swap to their Spread Shot and deal large amounts of damage up close. If you’re comfortable closing the distance, try this technique to expedite this portion of the boss battle. Eventually, Goopy will grab a coin and toss it in his mouth; this starts the second phase. 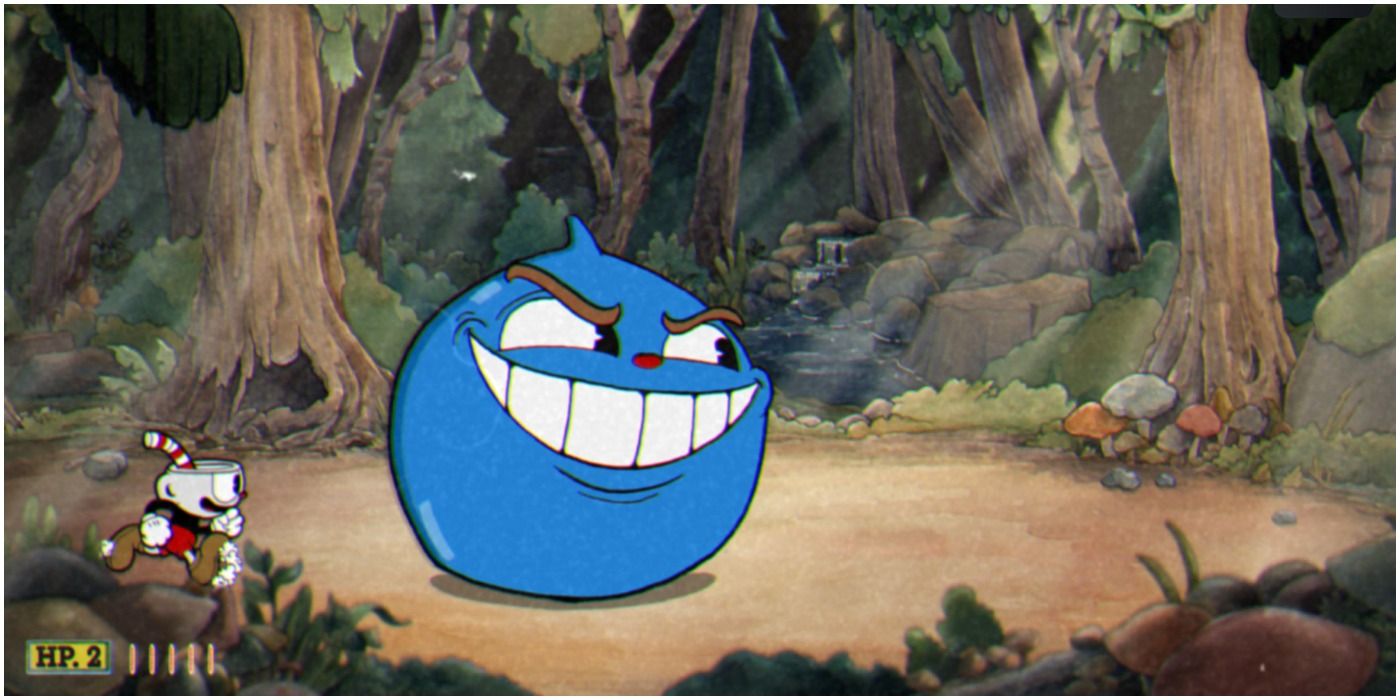 Immediately after Goopy swallows the coin, several pink question marks will appear above him. Try to run up and parry them, as these are the only parry opportunities throughout the entire boss battle. Several seconds after these question marks appear, Goopy will grow exponentially. He’ll become a much larger enemy with more range for each jump, evolving his Glop Hop into Out of the Blue. He can even bounce off the edge of the screen, ricocheting back towards the center of the screen. Because Goopy is so big, it’s easier to land hits, so hold down the fire button while evading his bounding, alternating the Peashooter and Spread Shot depending on the situation. 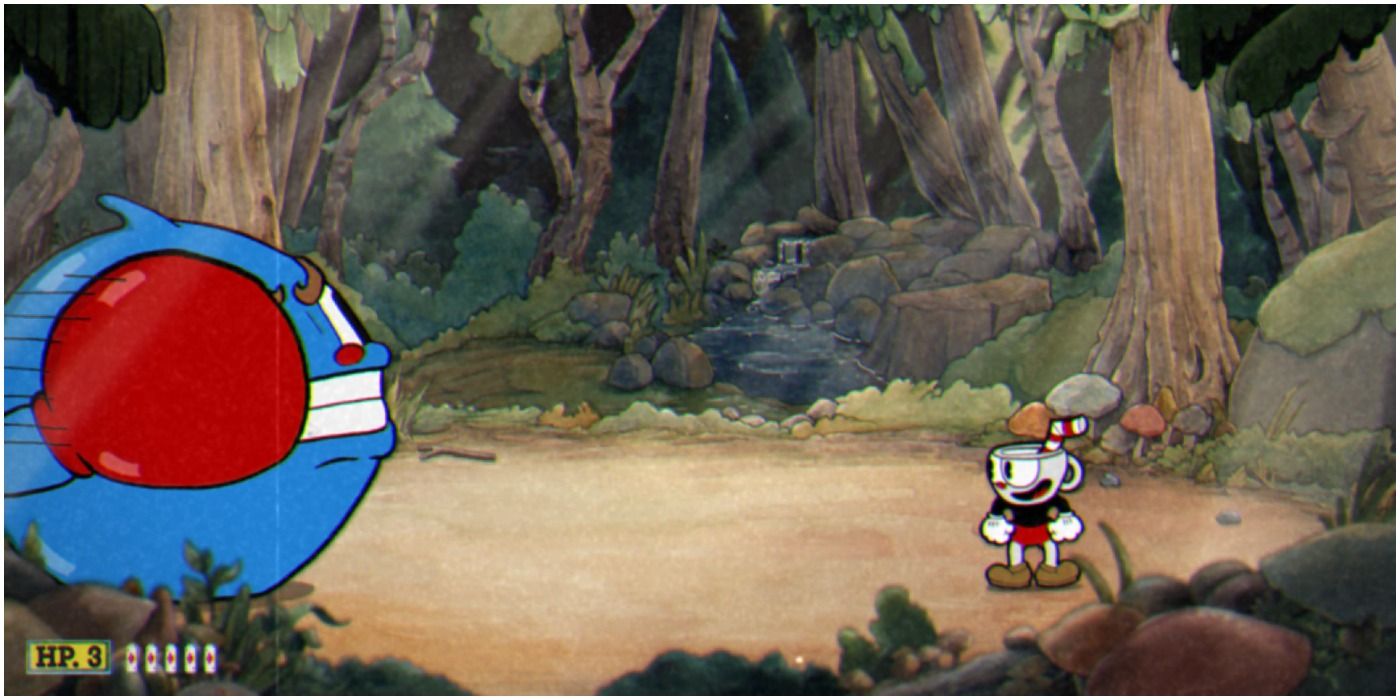 Goopy gains another attack in his enhanced state, his Slippery Slugger. With this attack, Goopy will wind up a giant boxing glove before punching Cuphead. Make sure to duck beneath this attack and capitalize on this opening by getting close and firing the Spread Shot. Eventually, Goopy will drop, initiating the Final Phase. 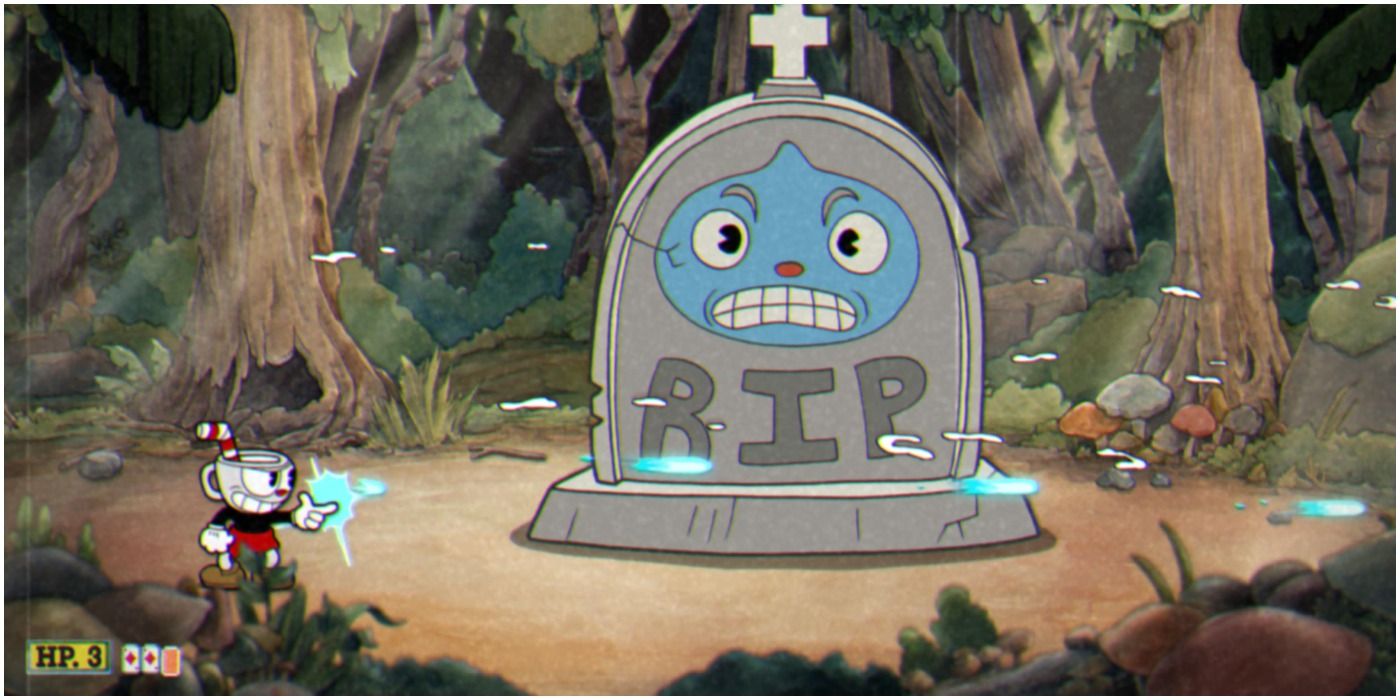 The Final Phase of the fight introduces a giant Goopy Tombstone. This stone will pass move by Cuphead three times before slamming the ground around him with Grave Danger. Make sure to count how many times he’s passed by, being prepared to dash when he aims to crush this tenacious little mug. Swap to the Spread Shot and aim up, as shooting forward won’t damage Goopy. Use EX attacks and consistent Spread Shot damage to bring this boss down, grabbing his Soul Contract in the process.

Next: Cuphead: The delicious Last Course Has Been Delayed Into 2021 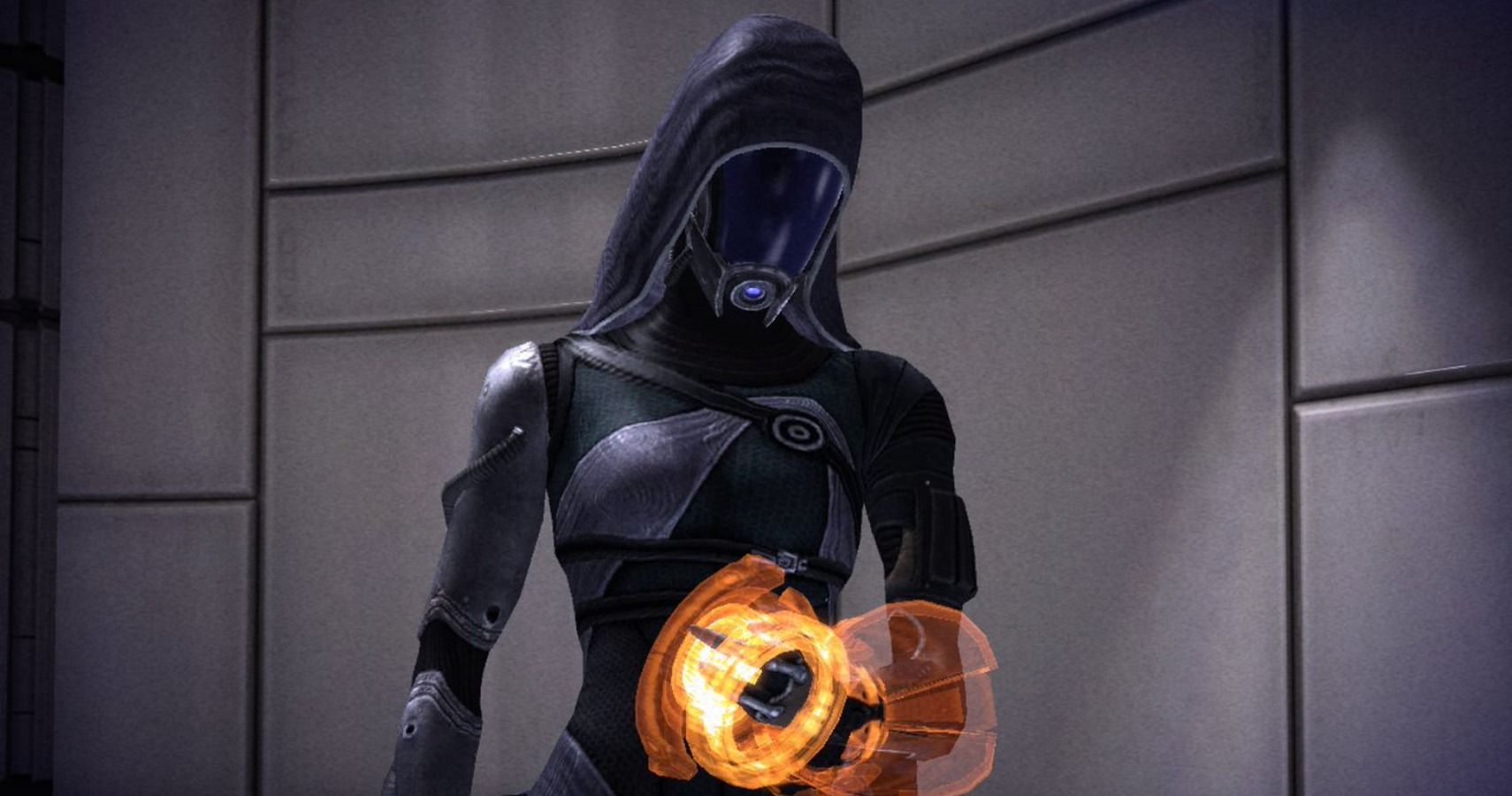