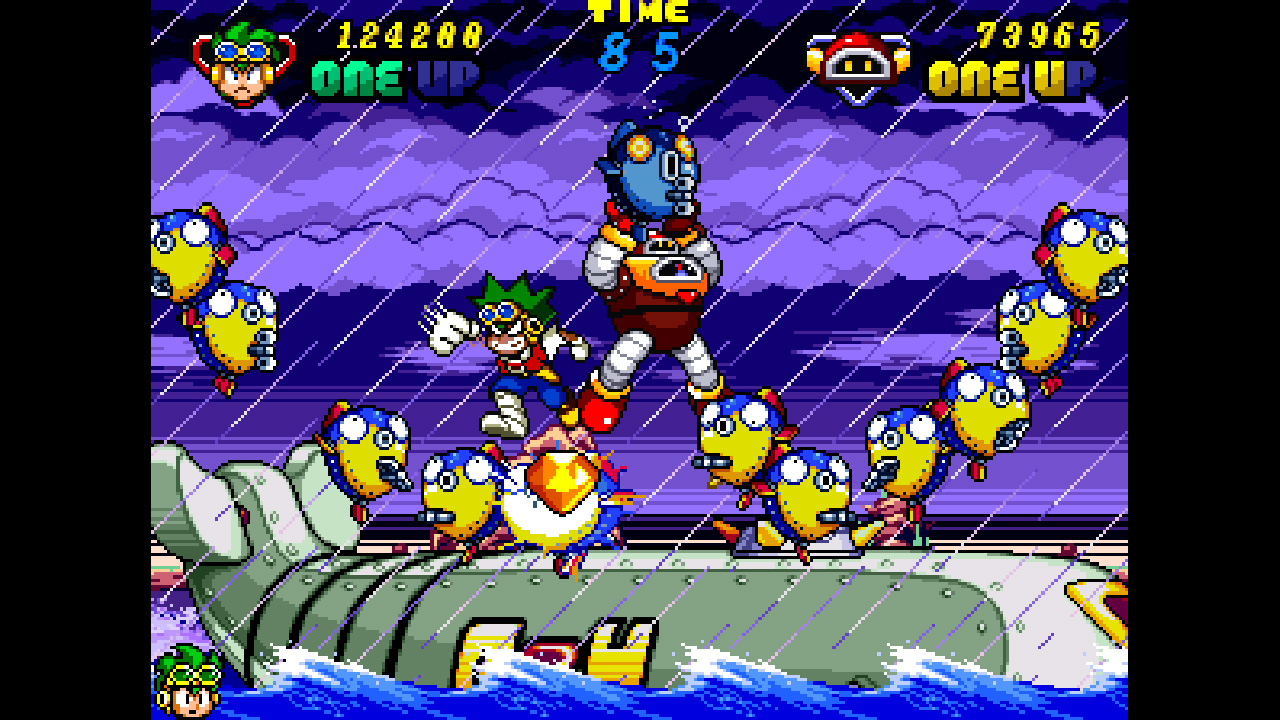 GameCentral reviews Sega’s final arcade game – almost completed in 1993 but only released to the public this year.

The next time you find yourself waiting impatiently for a long anticipated game, consider that the Guinness World Record for the longest development period stands at 28 years and 81 days. Clockwork Aquario took the record from Duke Nukem Forever, which has the welcome bonus of making it even easier to forget that disastrous attempt at a reboot. Clockwork Aquario is a name you’re much less likely to recognise but it is a considerably better game.

The decades long gestation period is definitely one of Clockwork Aquario’s major selling points but it doesn’t entirely overshadow the game itself. Its backstory is an inarguably interesting one though, with the game originally having been intended for release as an arcade game in the early 90s.

Despite pushing the Sega System 18 (the same hardware used for the likes of Shinobi and Golden Axe) to its limits the fact is that by 1993, when the game began location testing, people were much more interested in 3D titles like Virtua Fighter and Ridge Racer, and so the almost completed game was cancelled. Its name lived on in fan circles though and now publisher Inin has helped to remaster the game for home release.

Clockwork Aquario is the work of Westone Bit Entertainment, a Japanese developer that lasted all the way until 2014 but is best known for the original Wonder Boy and Monster World games. Since not all the original source code survived, Inin has worked with former Westone staff, including designer Ryuichi Nishizawa, to create this completed version of Clockwork Aquario. Something which is reminiscent of the efforts made to remaster cult classic movies but is almost unheard of in terms of video games.

The end result of this archaeological reconstruction is that you now have the chance to play an essentially brand new arcade game from a top developer. And not just a minor variation on some existing title, or a generic action game, but something genuinely unique and enjoyably weird.

Clockwork Aquario is an action platformer, originally intended to be similar to a two-player co-op version of Wonder Boy 3: Monster Lair. That connection is not obvious in the final product though, which has you controlling a choice of stock anime male, female, and robot character in their quest to stop Dr Hangyo from destroying/taking over the world.

The differences between the characters are purely cosmetic, with each having a different looking melee attack but also able to defeat enemies by jumping on their heads. You can also grab most of them and throw them in any direction, as long as you first stun them with an initial attack. The game tries to encourage this as much as possible by ensuring enemies and collectibles are neatly lined up, but it’s easy to get distracted trying to get your unwilling projectile ready, so it’s always a calculated risk.

There are echoes of the Bubble Bobble series and other arcade greats like Snow Bros. (as well as Treasure’s Mischief Makers) in the throwing mechanics but while Clockwork Aquario doesn’t have quite that level of depth or versatility there’s certainly far more to it than a mindless button basher like Golden Axe.

That’s especially true because you can pick up and throw the other player in co-op mode, which is highly entertaining whether you’re taking the game seriously or not. If Clockwork Aquario had been released in the 90s it would probably be viewed nowadays as a minor classic, praised for its gameplay and lauded for its graphics.

The most obvious problem with the game is that it’s only around 20 minutes long and if you were able to use infinite continues you could blunder through the whole thing without even really trying. Inin obvious realise this though and the standard arcade mode is locked until you’ve beaten the training mode, which is composed of the first two levels, using a limited number of continues.

In other words, you’re forced to learn what you’re doing, and the nuances of the gameplay mechanics, before you get the chance to just spam your way to success. (There’s no rewind or save states, but they’re not necessary because you restart where you died.)

Visually, the game is gorgeous and while pixel art is still commonplace nowadays, primarily thanks to indie games, this is the real thing, from an era when there was (almost) no alternative. It’s easily Westone’s best work and one of the best looking 2D games of the era. The animation can be a little stilted but it’s still full off fun details, with the boss characters in particular being full of personality.

What we would advise though is to immediately turn on the screen filter. It’s off by default and not only is it essential to see the game as it was originally designed but it’s got tons of options to fine-tune the CRT-o-vision to your exact preferences.

It’s clear that everything possible has been done to present Clockwork Aquario in the most authentic and appealing way possible, but at the end of the day it’s a 20 minute not-quite-classic arcade game with little in the way of replay value. There’s a simple combo system, which is unusual for a platformer, but with no online leaderboard to compete against the challenge to beat your high score has no external reward.

A lot of work has gone into Clockwork Aquario, both now and back in the 90s, and it is definitely possible to appreciate today no matter your affinity for old school arcade games. For most people though, the asking price is beyond that of an impulse purchase and that means that, while it is at least an option now, Clockwork Aquario will still never end up being played by as large an audience as it deserves.

In Short: An obvious labour of love that finally provides a full release for one of the best looking 2D arcade games ever made, although it’d be wrong to paint it as a lost classic in terms of gameplay.

Pros: Fantastic visuals and a fun and relatively versatile combat system, with level design that’s much more like a console game than an arcade title. Excellent remaster/reconstruction and great co-op.

Cons: The game’s very short and has relatively little replayability, especially as there’s no online leaderboard.